Shortly after finding myself unemployed in mid-June for the first time in 20 years, Jeff and I decided to take our tennis obsession to a new level and attend our first USTA event. We had the nice opportunity on a weekday to see several good matches at the Nielsen USTA Pro Tennis Tournament in lovely Winnetka, Ill. I had nearly forgotten about this beautiful day in late June until three players surfaced front and center at the US Open, which Jeff and I have been watching religiously.

Although Nielsen runner-up Bobby Reynolds was  eliminated in the first round of the US Open by David Nalbandian, it was nice to see him honored on Tuesday night as a member of the Washington Kastles, who won the 2011 World Team Tennis Championships.

It was very exciting to see veteran journeyman Michael Russell give Andy Roddick a run for his money in round two. He won Set 3 6-4 and inevitably went down in Set 4, 7-5, but what a gutsy  performance. Not bad for a 33-year-old whose greatest claim to fame was getting to the final round of 16 at the 2001 French Open. I think his guns have gotten even more impressive than they were in June – his arms are really enormous.

And then of course Chicago boy Donald Young, who showed such promise as a junior champion but has struggled as an adult. Donald displayed bad boy behavior at Nielsen, screaming profanities at the umpire, even losing a point due to his antics. I found it hard to root for him even though he was clearly the better player that day and did win his match after calming down. I missed his spectacular 5-set US Open win over good-natured Stan Wawrinka, but did catch part of the press conference. He needs to learn some humility and grow up a bit, but I was still happy to see him advance.

Just returned from playing tennis, and big surprise, immediately tuned into the US Open … 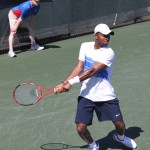 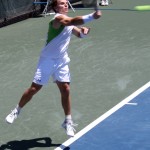 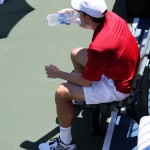