Sometimes the oddest random encounter leads to sleuthing. In this case, a visit to the Salvation Army Family Store in Mundelein led to my interest in an artist known as Countess Zichy, as well as the NYC-based publisher Edward Gross that printed reproductions of many of her paintings. Erzsebet Podvinecz, often went by the name Maria, but painted under the name Countess Maria Zichy after she emigrated to the U.S.

Erzsebet (Elizabeth) Maria Podvinecz was born in Budapest, Hungary on June 29, 1893 to Daniel Podvinecz and Hermina Racz (Rosenberg). Daniel Podvinecz was somewhat famous in his own right, an industrialist who built motors and motorcars. In 1901, at the tender age of 25, Daniel and his 24-year-old partner Vilmos Heisler, started assembling Austrian Leesdorfer cars. Their work is acknowledged as important in the creation of MÁG (later known as Magomobil – Hungarian General Machine Factory Corp.), the most important Hungarian vehicle manufacturer before World War II, based in Budapest.

At age 12, Erzsebeth demonstrated enough artistic talent to warrant studies with Mixsa (Max) Thein, a noted Budapest painter and teacher. By 14, she was studying at the Fine Arts High School (Kepzomuveszeti Foiskola) of Budapest. She next went to Paris and studied at the Academie de la Grand Chaumiere under Émile-René Ménard. After returning to Hungary, she studied for a short period in 1908 at the Royal Hungarian Academy, now the National Academy of Art and with the well-known Hungarian painter János Pentelei Molnár. She worked in Munich at the school of Hermann Groeber and at the Knirr School. She returned to exhibit in Budapest at the Mucsarnok and at the Nemzeti Szalon. The Catalogue of the Nemzeti Szalon for March/April 1915 lists her paintings (numbers 190 through 222) with a total value of well over 136,000 Korona, a substantial sum at the time.

She married Endre Gyula Johann Kasimir Emmerich Géza Zichy in Budapest on November 19, 1919. Erzsebet and Endre went to America for the first time the same year that they were married. An early publicity article about them stated that she had been the court painter of the Hapsburgs and the Communist regime of Béla Kun had threatened to cut off her hands. It was further implied that her husband had been threatened as he belonged to the landholding aristocracy. They started out in New Orleans, followed by El Paso, Texas, taking refuge with her aunt, Eugenia Schuster and her family; already established as leading citizens of that city. During that visit, Erzsebet painted portraits of well-known local residents of El Paso and earned a respectable income.

From El Paso, they apparently went on to New York City, moving to an apartment at 525 W. 135th Street. They returned to Hungary for a visit in June 1921, as the Horthy regime had reestablished order in the country. Later that year, along with her sister Stephanie, the couple sailed on the S.S. Kroonland from Antwerp to NYC, arriving on December 1. A fact revealed by the immigration records was that Endy was a mere 5’5″ tall, the same height as his wife and sister-in-law.

At some point following her arrival in the U.S., Erzsebet started painting under the name Countess Maria Zichy. During the 1930s, she and her husband repeatedly visited Europe. Countess Zichy developed renown in the U.S. as a portraitist for the elite classes. In addition to painting portraits, she started teaching, first at the YWCA, then at the City Center Galleries. Eventually she founded the Countess Zichy Academy of Art in NYC. This catered generally to wealthy socialites, but helped foster some real artistic talent. She liked to paint flowers and her agent took one of these flower paintings, done solely as a teaching exercise, selling it en route to the gallery at which it was supposed to be exhibited.

Following this sale, a lucrative contract was signed with Edward Gross Company, a large NYC-based publisher of art prints in business from 1908-1951, Watson Guptill a book publisher specializing in art books, and Grumbacher, the artist material and supply company. Her sole seascape was available in print format as a premium of the Triple S Stamp booklet, which rewarded Grand Union grocery shoppers for their loyalty. The contract with Grumbacher featured Countess Zichy demonstrating their products at exhibits. In one promotion, she was to paint a portrait on the spot for a participant at an event. In 1961, Countess Zichy wrote a book, Flower Painting, its Art and Technique, published by Watson Gupthill.

One of her paintings is in the Hungarian National Gallery in Budapest. It was painted and donated as a benefit for wounded soldiers during World War I. This is the only Podvinecz signed work found in Budapest, as of 2008.

Countess Zichy died of a heart attack during a visit to Europe on July 20, 1962 in Baden Baden, Germany, at age 69. Her remains are buried in Somers, New York in the Ivandell Cemetery along with her mother and the remains of her two sisters and brother-in-law. When I searched this, her grave record did not come up. A scholarship has been endowed by the family in her name – the Countess Maria Zichy Award, at the Ringling School of Art in Sarasota, Florida.

A spokesman for Edward Gross said at the time of her death that hundreds of thousands of her prints were in circulation. These prints are available for very little money on eBay, Etsy, and at thrift stores. The example I saw that led to this article had a price tag of just $1.94! I passed it up, not knowing at that time, a thing about the artist known as Countess Zichy. 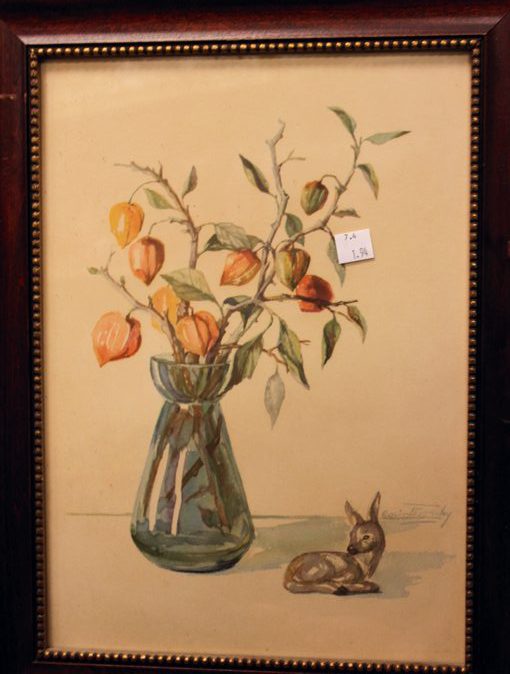