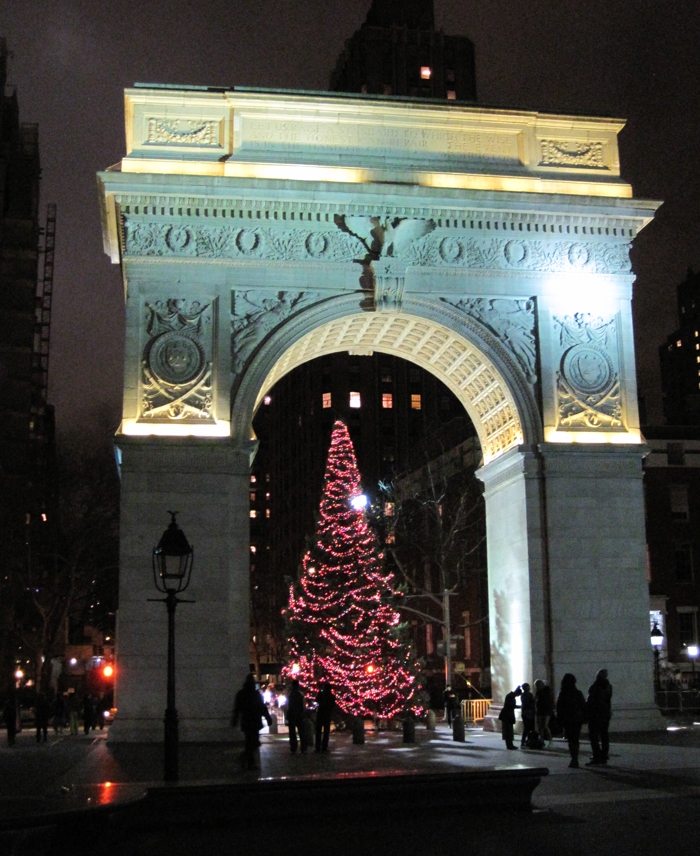 I have been experiencing a wave of nostalgia – it comes with age and recent losses of dear friends and our beloved little kitty Pepper. For me, the holidays seem to inspire reflections on the past – thinking back to how much New York City used to mean to me at Christmas. I have been digging up wonderful Christmas-related NYC photos from the Library of Congress and decided to delve into my own archives to see what I could find.

When I was a child and up through about 2004, my parents would visit NYC every December for an annual psychiatric meeting at the Waldorf Astoria. While my dad was attending lectures, my mom would go window shopping with some of her friends. As children, my sisters and I always looked forward to my parents coming home with intriguing presents. My dad would also visit Russ & Daughters and purchase obscene amounts of candy that he had shipped home. Chocolate covered coffee beans, pastel chocolate mint lentils, and chocolate covered raspberry rings are the candies that I remember most. He would tell me stories about buying pretzels and roasted chestnuts from street vendors, shopping at B. Altman, Gimbels, and other now defunct stores; telling me tales that made it sound so magical.

The oddest gifts he ever brought home were jewel-encrusted live snails – my mom didn’t want them in the house so we put them behind the garage after a few weeks. By then, the glitz and novelty factor had worn off – the rhinestones simply did not stay on the snails’ shells! Another time he bought three gingerbread house craft kits which became infested with ants before we finished decorating them.

When I was at RISD, I would almost always visit NYC during Thanksgiving and spring breaks. Twice during my RISD years, I had the chance to visit NYC around Christmas. I experienced firsthand the enchanting traditions my dad had told me about years earlier, including buying pretzels and chestnuts from street vendors. I delighted in the wonderful spirit that seemed to envelop the Big Apple, embracing all the sights, sounds and smells.

On the first of these trips, my younger sister and I stayed in a bathroom-sized adjoining room to my parents at the Waldorf – I remember sleeping on the floor. My older sister already lived in NYC for a couple of years at this point in time. They took all of us to see A Chorus Line on Broadway, which in retrospect was interesting, since my younger sister was a production assistant on the 1985 film of the same name and we visited the theater set.

The second time I went in December was with my then boyfriend Steve, and we took nighttime photos in Times Square. The neon lights and sleaze had a certain pull that I found fascinating – in a visceral, voyeuristic sort of way. That second trip must have been in December 1977. After Steve and I broke up, I would return by myself to photograph Times Square. I detest what Times Square has become – the gritty, dark reality of the past was preferable to the overblown Disneyfied commercialism of recent times.

Although I visited NYC many times throughout the years, I would not return again in December until 35 years later – in 2012. My sweet daughter moved to NYC in August of that year, and I decided to visit her around Christmas. The weather was actually unseasonably warm, which was perfect for walking around and taking pictures. NYC has changed enormously in the last 35 years, and even in the last 2 years – I frequently bemoan the demise of the NYC of yesteryear. The photos included herein are a tribute to this special time of year, and a reminder to embrace those special moments – life is ever so fleeting, especially in the big city. People are too often rushing around, faces buried in their smart phones. If I was in NYC right now, I would give my daughter a big hug first … and then embrace the sights, sounds, and smells of what’s left of what was once a spellbinding city – before they disappear forever.