The F. W. Woolworth Company, also called Woolworth’s or Woolworth, delighted children and their parents alike for more than a century. In Illinois, 25 Woolworth stores, mostly in Chicago and the suburbs, were shuttered forever in July 1997. In the UK, the stores lasted a decade longer, going out of business in December 2008. The very last thing I bought at Woolworth’s when the store was liquidating stock, was a pair of Barbie roller skates for my then 9-year-old daughter. 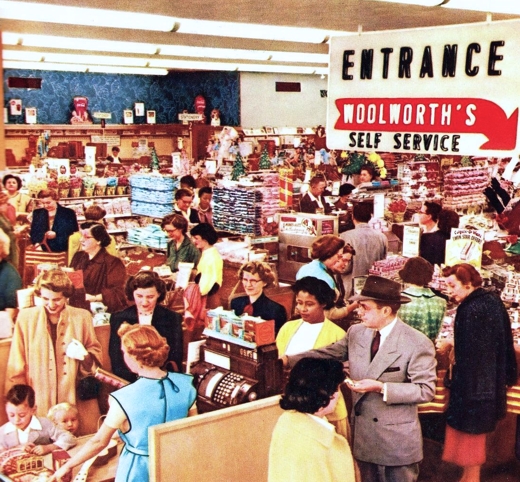 The store closures symbolized the end of quite a run that began on February 22, 1878 when Frank Winfield Woolworth opened “Woolworth’s Great Five Cent Store” in Utica, New York. The first store failed after a short time, however, the second store that opened on July 18, 1879 in Lancaster, Pennsylvania was a big success. When he launched the Lancaster store, Frank enlisted his brother Charles Sumner Woolworth to join the business.

By 1904, there were six affiliated chains operating throughout the U.S. and Canada under the Woolworth Syndicate. At the suggestion of Frank Woolworth, the syndicate agreed to join forces and incorporate under the corporate entity “F. W. Woolworth Company” in 1912. This equated to a merger of 596 stores. 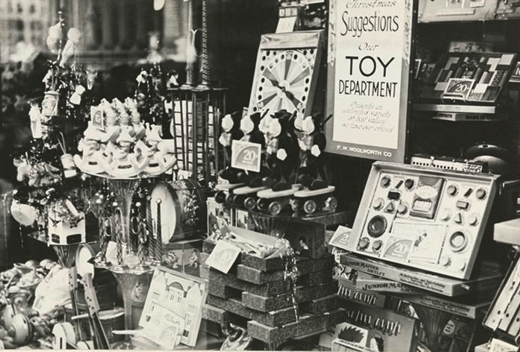 Woolworth’s has been featured in popular culture, although not as much as you would think. The Girl From Woolworth’s, circa 1929 sounds like a cute B movie. In 1982, there was Robert Altman’s Come Back to The Five and Dime Jimmy Dean, Jimmy Dean which takes place in a decrepit Woolworth’s in a small Texas town. Here is a commercial that aired in the Chicago market in the late 1980s.

Come Back to the Five and Dime with Me

My love affair with Woolworth’s started out on a less than positive note at age 5, when I was caught red-handed with a large multi-colored balloon that I had stolen. While it only cost 2 cents, my dad made me take it back to the manager and apologize. As I recall, I received further punishment at home. This transgression occurred at the Woolworth’s on Michigan Avenue. 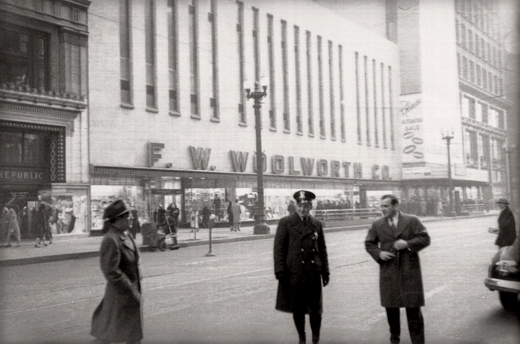 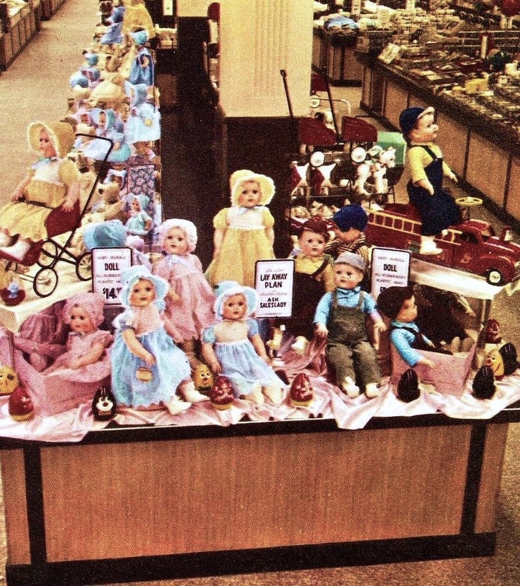 By the time I was 10, I was taking the bus by myself to downtown Chicago from Lincolnwood. How I loved going to the Woolworth’s on Michigan Avenue on the Gold Coast and later to the giant flagship store on State Street. My mom rarely gave me any money beyond what I needed for bus fare, but I managed to find spare change on the ground or sometimes brought my meager savings earned from returning Diet Rite bottles to the corner store.

I loved the counters and displays filled with delightful trinkets, and I fondly remember the turquoise and yellow parakeets chirping away in the pet section. I was so happy when I convinced my mom to buy me a bottle of cheap dime store perfume called Blue Waltz. It smelled pretty bad, but the shape of the bottle was so delightful that the sight of a bottle now produces pangs of childhood nostalgia. 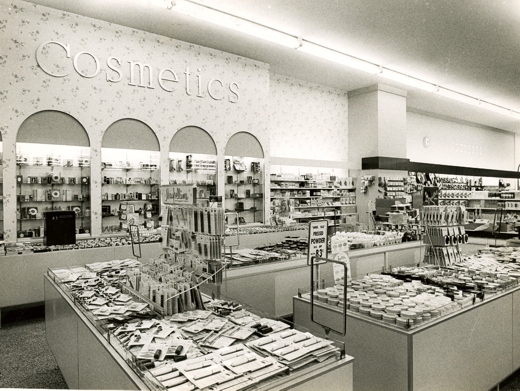 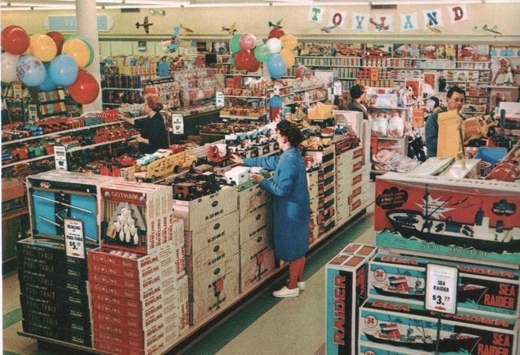 My older sister got her ears pierced and I bought her some really cute genuine pearl and gold-filled earrings for only $1.00. I recall that they had these center islands loaded with bargains like costume jewelry for a $1.00 or sometimes 2 for $1.00. I also remember that my older sister bought these little boxes of cone incense that she would burn in her bedroom. This ritual seemed so mystical to me, perhaps because she rarely let me go in her bedroom. I would sneak in there sometimes when nobody was home.

I bought grab bag stamp collections for $1.00 with huge, gorgeous, colorful stamps from faraway lands. I was also into beading and remember buying some cool metallic blue bugle beads and colorful sequins. I bought my little sister this awesome set of red plastic doll-size tea cups and saucers. When you poured water in the cups, a magical image appeared on the bottom. I think they were photos of movie stars. It seemed like a lot of merchandise was priced at just $1.00 and back then candy bars were ridiculously inexpensive. Come to think of it, Woolworth’s was the predecessor to today’s dollar stores that sell junk made in China, albeit far more magical. 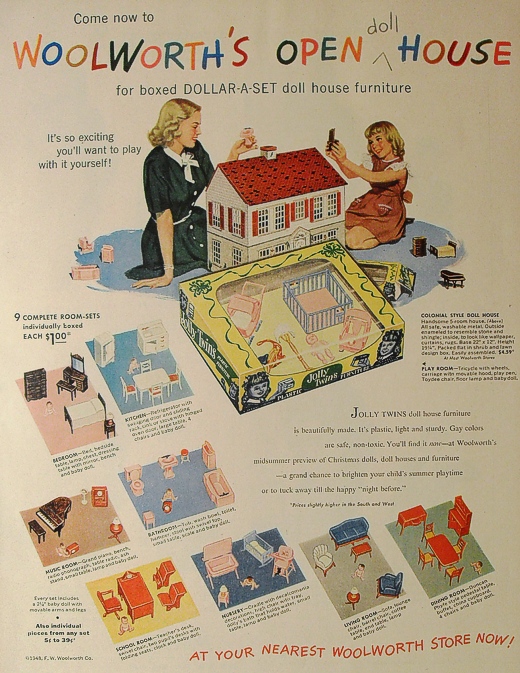 By the time I was 12, I would enjoy going to the basement at the Michigan Avenue store to browse through the bargain bin records. I bought a bunch of 45s, an album by The Strawberry Alarm Clock, and a more obscure album by The Monkees.

There is nothing quite as wonderful as eating at the Formica counter of a dime store cafeteria. I can recall the aroma of the hot dogs spinning around on the cooker and the macaroni and cheese. My favorite by far was this delicious Neapolitan ice cream sandwich. The ice cream was sandwiched between two thick wafers that had the taste and consistency of a waffle cone. These things were square and mammoth – at least that’s how I remember them. I took the last photo in 1975 and was taken aback when I saw the woman smoking at the counter – it feels to me now like this practice was never allowed. 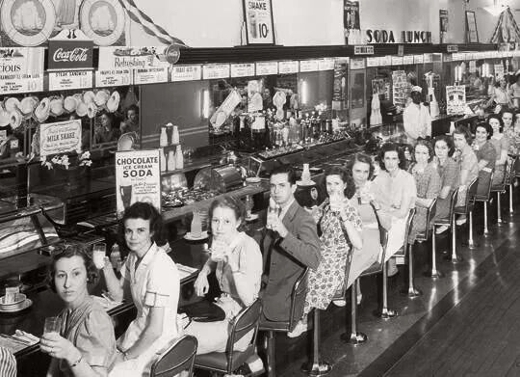 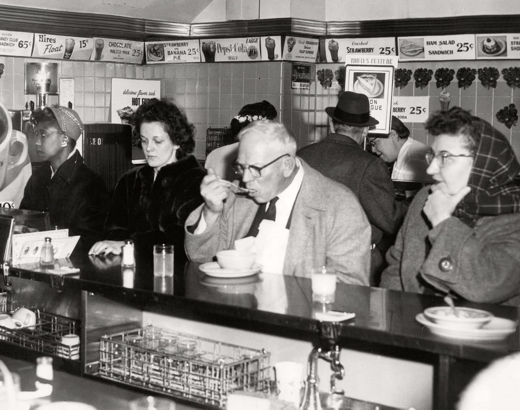 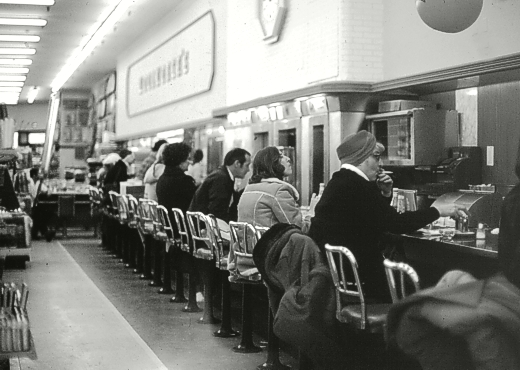 When I went off to RISD in 1976, I found myself walking around downtown Providence with some frequency. The Woolworth’s on Westminster Street did not have as much charm as the stores in Chicago, or perhaps it was just that I was older. I don’t really remember buying much at the Woolworth’s in Providence. I preferred an independent five and dime store in the Olneyville section of Providence that had an-old fashioned soda fountain and luncheonette. 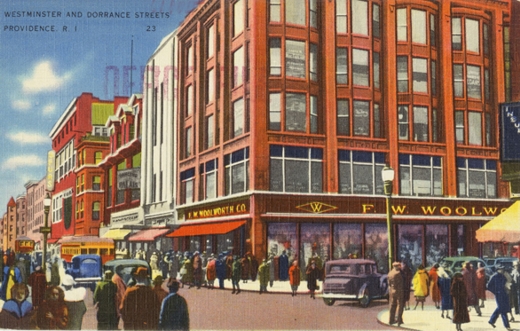 I wish I could turn back the clock and eat at a Woolworth’s luncheon counter. If I close my eyes and think about it hard enough, I can smell the aromas wafting from the grill. Unfortunately, time passes inevitably and with it, progress and change strips away childhood delights. However, I will always have memories of browsing the aisles and bins for wonderful trinkets to take home. If you have any fond Woolworth’s memories you would like to share, please leave a comment. 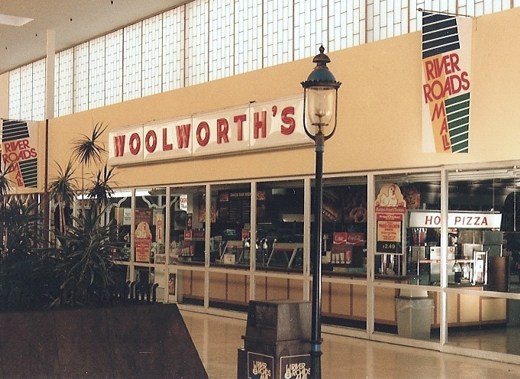