Home Advertising Once Upon a Time on Maiden Lane – NYC

Once Upon a Time on Maiden Lane – NYC 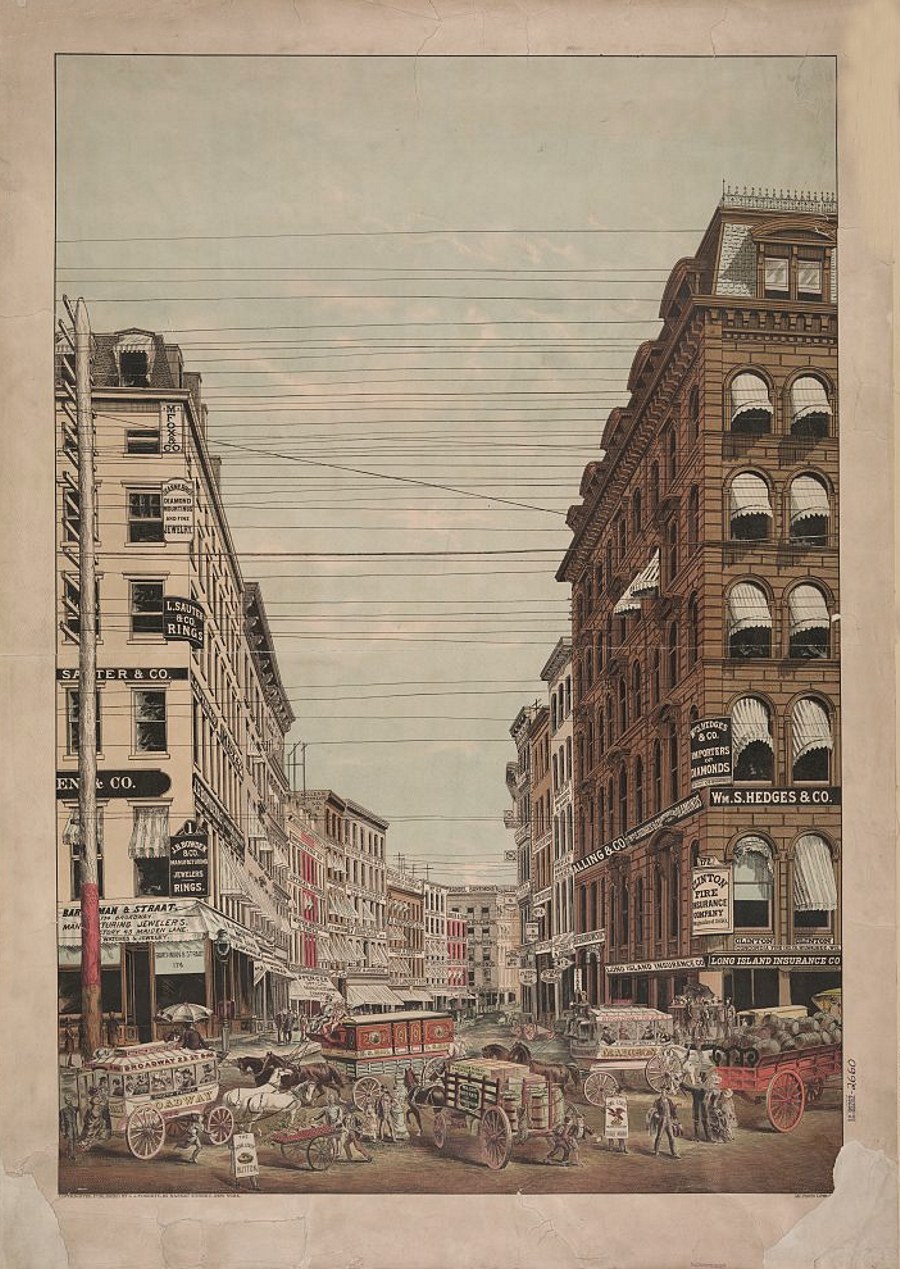 I’ve always been fascinated by the name Maiden Lane, an east-west street in NYC’s Financial District. It has such a charming and magical Old World sound to it. The western edge is close to the World Trade Center site and I likely discovered it for the first time in 2005, when my daughter and I visited the Ground Zero memorial at St. Paul’s Chapel. The street’s original name was Maagde Paatje, which is Dutch for Maiden Path. It was a footpath along a rippling brook frequented by lovers, as well as mothers and daughters who washed their laundry there on sunny days – sounds idyllic, indeed. After the street was cobbled over in 1698, the Fly Market opened where vendors sold fresh produce, fish, and meat under a covered roof until 1823. The Maiden Lane of old was a far cry from the bustling street that is home to the Federal Reserve of New York, other imposing buildings, and of course, Starbucks and McDonald’s. Two of the jeweler’s buildings still exist – Cushman at One Maiden Lane and the Diamond Exchange at 14 Maiden Lane, which was constructed specifically for diamond merchants and jewelers and completed in 1894.

I collect beautiful fraternal jewelry – primarily Benevolent Order of Elks (BPOE), Masonic, and Odd Fellows. In fact, back in the late 1980s, I drew illustrations for the F.N. Kistner catalog, a huge supplier of fraternal jewelry and gifts in Chicago’s jeweler’s row. Unfortunately, I wasn’t collecting these pieces back then, so I didn’t acquire any from Kistner. What inspired the idea for this blog were gorgeous sterling silver pieces I kept seeing on eBay marked Alfred Schickerling, 51 Maiden Lane. Most had patent dates of 1910 or 1911. This opened a proverbial Pandora’s Box, or in this instance, jewelry box.

The Epicenter of the Jewelry Trade

I discovered that Maiden Lane and surrounding streets had been the epicenter of the NYC jewelry trade from 1795 to the early 20th century. The subtitle on the 1885 antique print featured at the top of this blog indicated a space of less than two blocks on Maiden Lane was home to 308 jewelry firms! Many prominent American jewelers and clockmakers set up shop on Maiden Lane, including William Barthman Jewelers. Their 1884 bronze and glass clock still tells the correct time where it lies embedded in the sidewalk, at the intersection of Maiden Lane and Broadway. With rising rents, many jewelers moved to the Bowery, with the vast majority flocking to 47th Street by the 1930s. In doing research, I uncovered a treasure trove of old magazines called the Jewelers’ Circular archived online, with many ads for jewelers on Maiden Lane. In addition to Alfred Schickerling, I chose a few others to feature here. 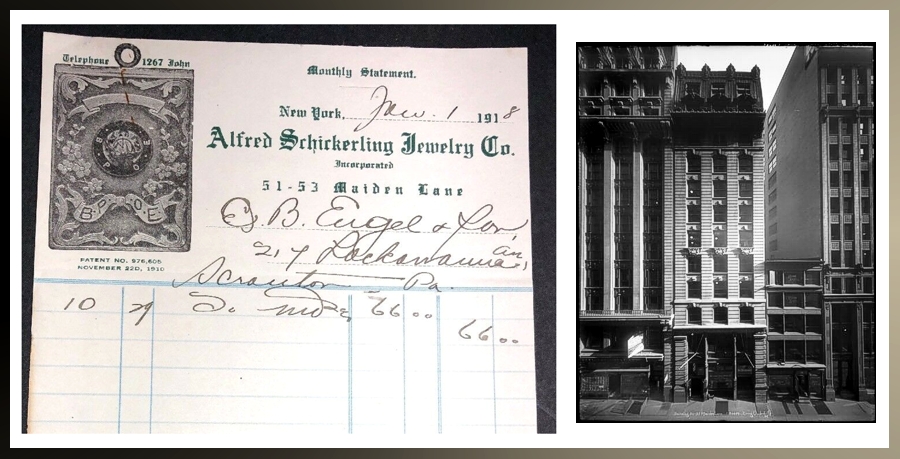 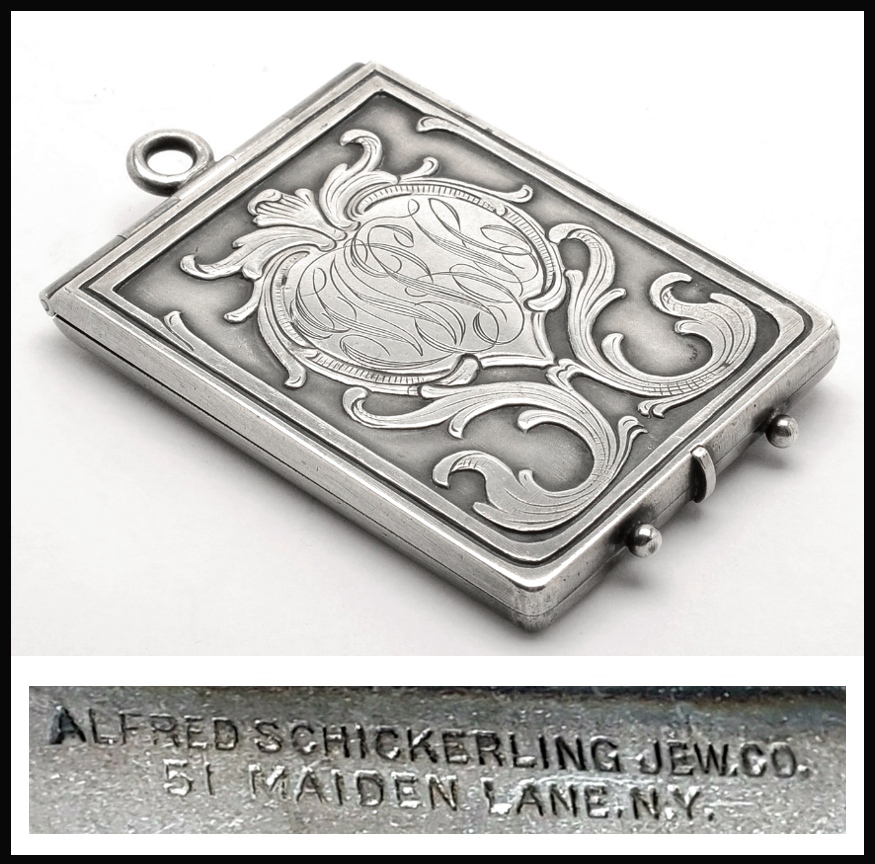 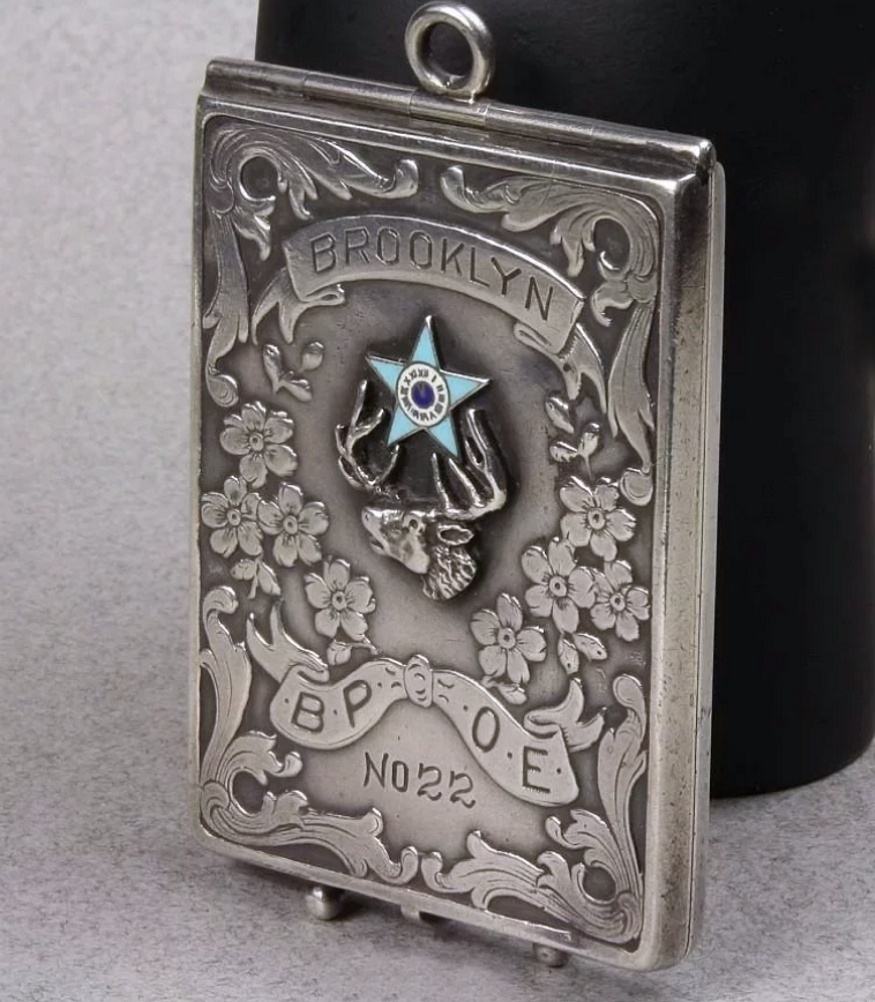 Conrad Schickerling, mounter of diamond jewelry, at 9-13 Maiden Lane formed a partnership with his brother Alfred Schickerling around September 1, 1899, under the name Schickerling Bros. The new firm planned on continuing business as before at the same address.

Conrad Schickerling ran into some trouble, according to several articles I found. I wonder if this unfortunate turn of events ended the brothers’ partnership. In June 1906, The New York Times reported that Conrad was in the Tombs Court, charged with stealing $6,000. Deputy Assistant Attorney Vandiver told the Magistrate that the prisoner was a member of a gang that swindled Maiden Lane jewelers out of diamonds worth $200,000. The bulk of the evidence came to light after the prosecution of Joseph and Morris Klein, two wholesale jewelers who pleaded guilty. Their businesses failed after they swindled other diamond dealers out of large sums. Some of these stolen diamonds were traced to a pawn shop not far from New York City Hall.

Gustave A. Edelhoff of Edelhoff Brothers & Co. Jewelers brought charges against Schickerling, who he claims came to him for a large quantity of diamonds to create a lorgnette chain for a bank president. Edelhoff agreed to supply him the diamonds and obtained them from another Maiden Lane jeweler, Henry E. Oppenheimer. Several days passed and Edelhoff hadn’t heard from Schickerling, so he visited him and found out he had pawned the diamonds at the shop near City Hall for $6,000. The article mentioned that Schickerling had jewelry manufacturing locations at 31 W. 31st Street and 28 E. 22nd Street, but oddly didn’t mention the Maiden Lane address. Edelhoff declared bankruptcy as a result of this debacle.

Four years later, Conrad was acquitted of these charges so perhaps it was a big misunderstanding and he was a scapegoat. By then, he was doing business in Newark, N.J. The beautiful pieces pictured above are signed Alfred Schickerling, 51 Maiden Lane, who obviously set up shop on this street at a different address. He specialized in manufacturing stunning fraternal jewelry for the Elks, Masons, Odd Fellows, etc.

By 1920, Alfred Schickerling had set up shop in Tribeca in the Jewelry Crafts Building at 45 Lispenard Street. I know this because I found an article in the October 6, 1920 Jewelers’ Circular detailing a robbery in which six jewelry firms lost merchandise to thieves. In the process of their thievery, the robbers nearly demolished three large safes, destroyed a number of locks, broke six windows, and blew one of Schickerling’s office desks to smithereens. According to the report, Schickerling lost the following pieces:

Despite an online search, I couldn’t find obituaries for either of the Schickerling brothers. 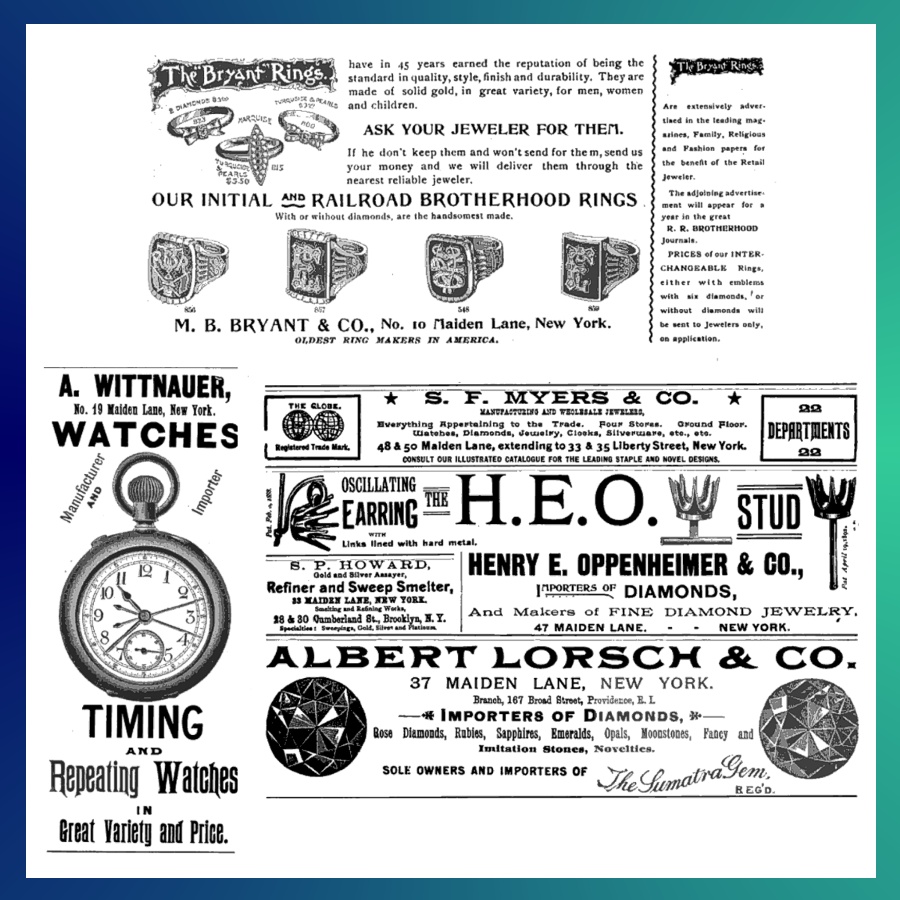 It was with deep regret that members in the jewelry trade throughout the country heard Monday of the death of Major Wm. A. Bryant, age 64, head of the firm of MB Bryant & Co., ringmakers on Maiden Lane. Major Bryant passed away on Sunday afternoon at the Presbyterian Hospital New York, following an operation for kidney trouble.

Major Bryant was widely known throughout the jewelry trade in which his father, the late Monroe B. Bryant was a pioneer manufacturer. When William was born, his father was connected with the house of Ira Richards & Co., which then had a NYC office at 157 Broadway. Four years later, the elder Bryant established the firm of Bryant & Bentley, founders of the ring house of which Major Bryant eventually became the director.

A year before the above ad for Albert Lorsch & Co, a robbery occurred on Friday, July 15, 1892. A package of diamonds, rubies, and pearls valued at $2,000 shipped from Paris inside a big box of sundries mysteriously disappeared somewhere between the Appraiser’s office, Second Division of the Custom House, located at Laight and Washington Streets, and the store at 37 Maiden Lane. At the time, Lorsch, who lived at 69 East 60th Street was in Europe. Apparently, three clerks who worked for Lorsch handled the box before it went missing.

Oppenheimer Bros. & Vieth, selling agents of NYC, began operating their company and assumed the name Keystone Watch Company as a trademark. The firm failed in 1890 and in 1892, at which time the property was purchased by the Hamilton Watch Company. Based on the 1920 ad, they obviously regrouped as a diamond cutter and importer of pearls. 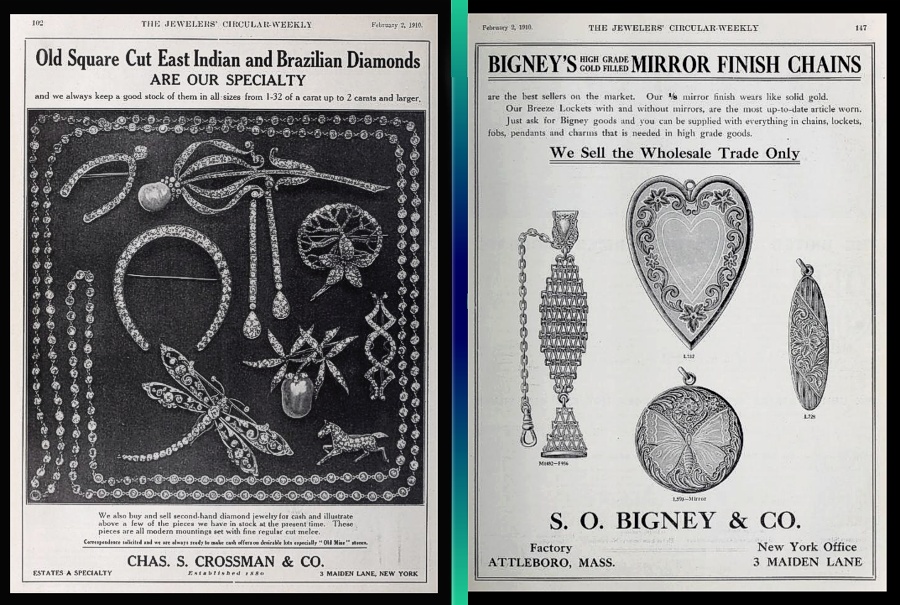 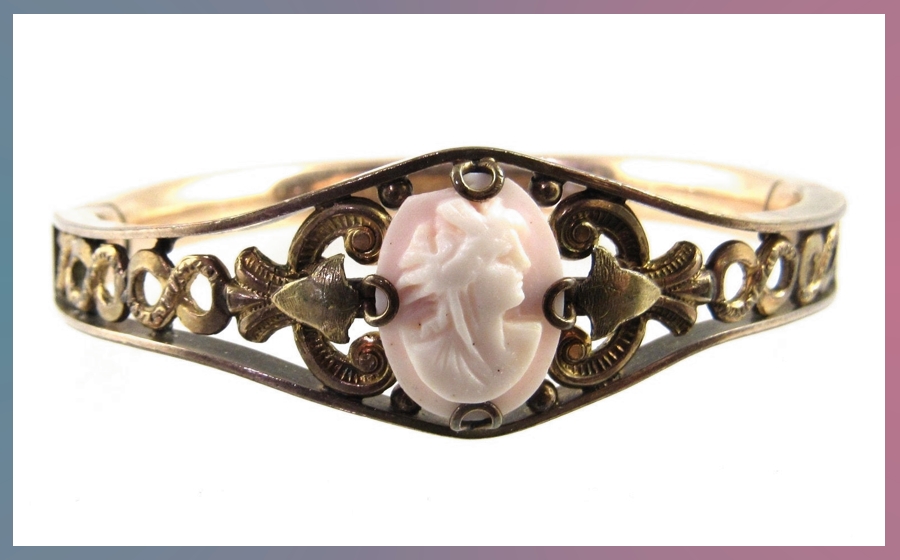 S.O. Bigney was established in 1849 in Attleboro, Mass., a jewelry hub in close proximity to Providence, another important jewelry manufacturing city. The NYC branch was located at 3 Maiden Lane. As a young man, he started out on his own, making his way in the industrial world by himself. Through determination and sheer will, Bigney found himself employing a large force of men and women as the owner of one of the largest, if not the largest jewelry plants in the U.S. During those years, he never experienced a strike or suffered from any other trouble with his employees. The average wage of the young women he employed was $2 a day, while the men made more than $3 a day. This motto appeared on his business cards: “Eternal hustle coupled with honesty and integrity is the just price of success.” 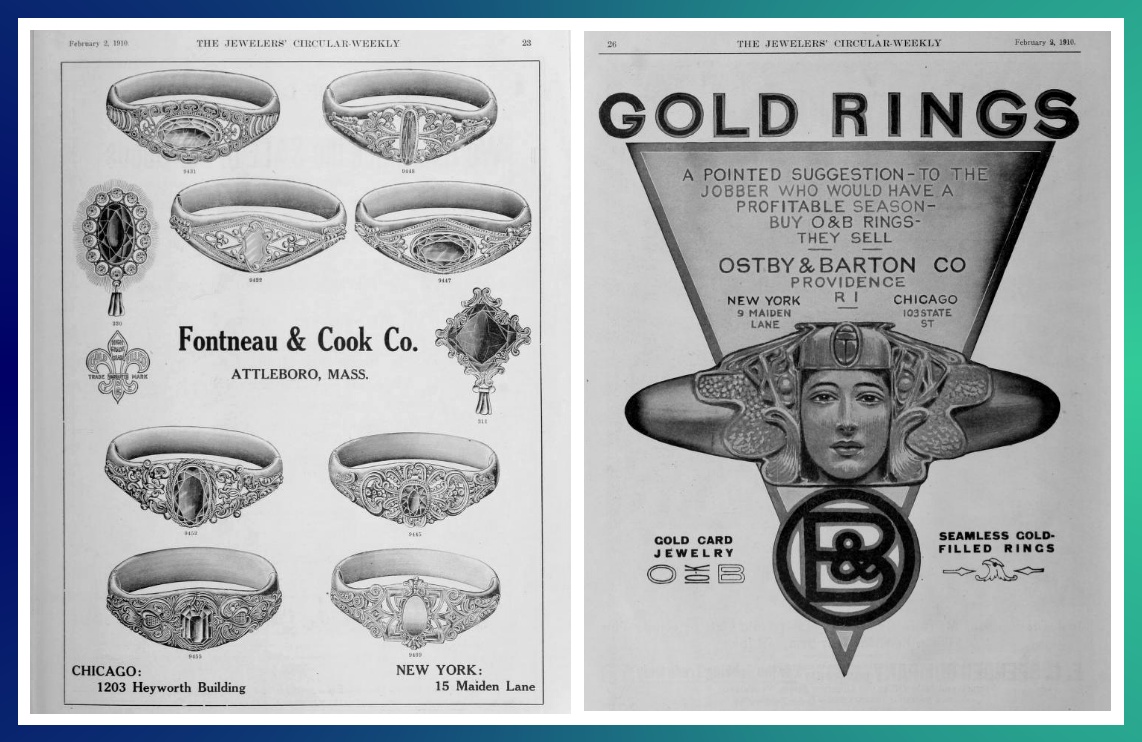 Canadian native Frank Fontneau learned his trade at Bliss & Dean. At age 18, he became assistant foreman of this factory, where he mastered his craft  for another 13 years. In 1895, he set out on his own and in 1899, formed Fontneau & Cook Company in Attleboro, Mass. They also had locations at 15 Maiden Lane and the Heyworth Building at 29 E. Madison in Chicago. Fontneau served as inventor and designer for the company and among his innovative designs were bracelets, a tea strainer, a cigar cutter, chains, a suspender attachment, and a comb attachment. Fontneau passed away on September 10, 1910 at age 59. 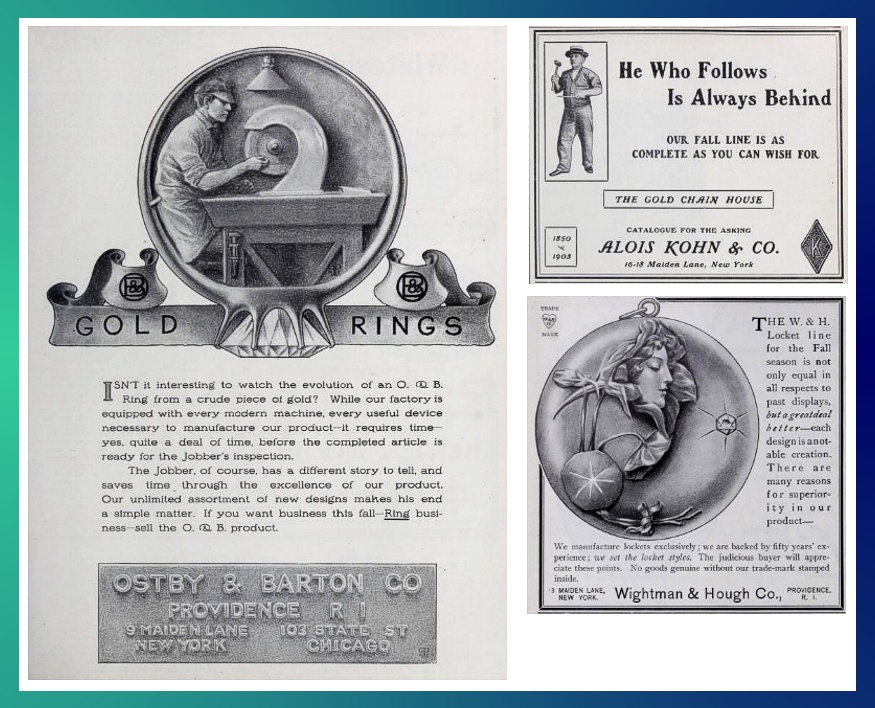 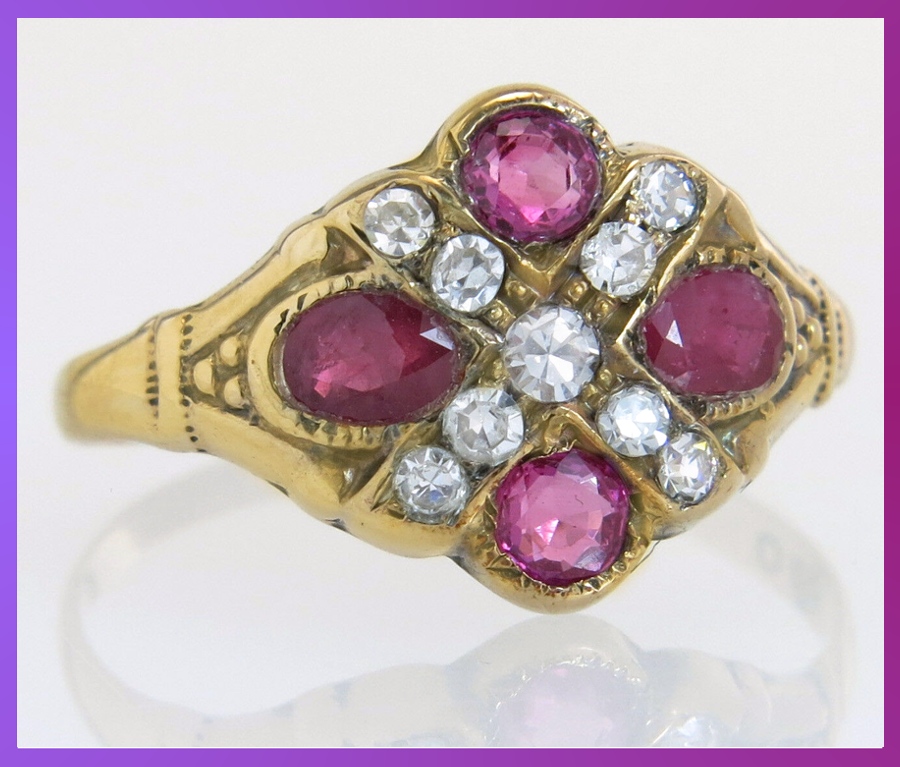 Ostby & Barton Co. was founded in 1879 by Engelhart Cornelius Ostby, who trained in his native Norway and Nathan B. Barton in Providence, R.I. Ostby and his daughter Helene traveled to Europe often to study European jewelry design and production. They boarded the ill-fated Titanic as first class passengers, with documented evidence Ostby had a doctor’s bag full of diamonds and souvenirs from Paris in his possession. This tragic event became part of the mystique of this company’s jewelry.

Helene never saw her father again because he lost his life during the shipwreck, at age 64. His body was found by the ship and it was noted that he had a gold watch and chain, knife, glasses, diary, two pocket books, and papers. Despite this tragedy, Helene returned to Providence and with her brother Harold and his daughter, the three became joint owners of the business. The firm continued to produce jewelry into the 1950s. They also manufactured fraternal jewelry, although I think this was a secondary part of the business. It’s unclear how long they operated the locations at 9 Maiden Lane and Chicago’s State Street. Helene passed away in 1978 at the age of 88. 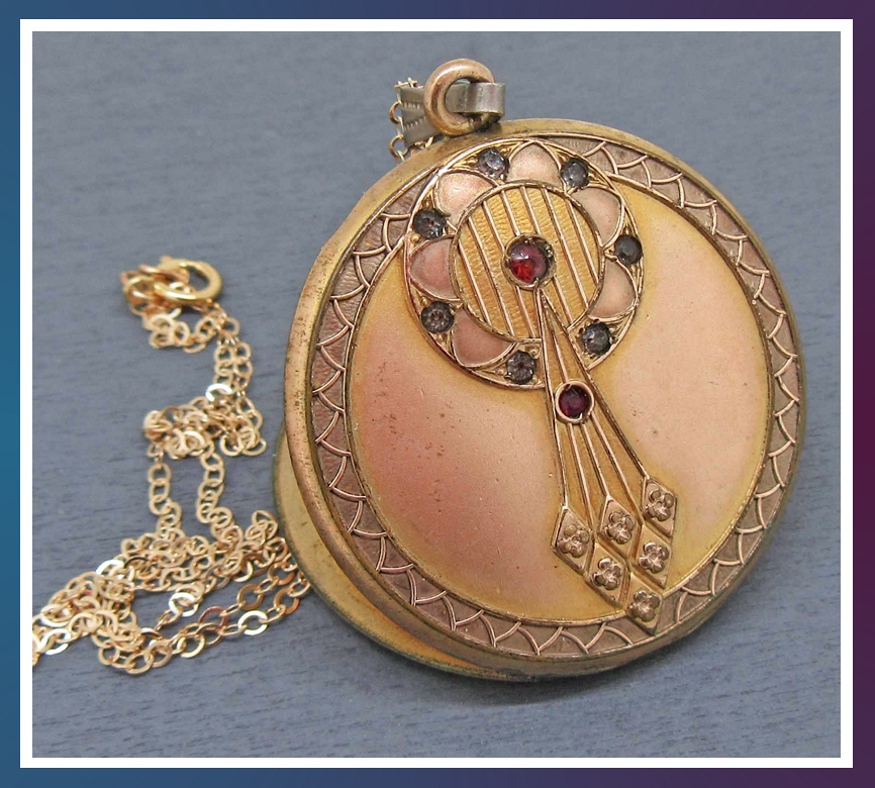 Wightman & Hough established its business in Providence, R.I. in 1856 and continued production through 1922 (early Art Deco period), with a NYC location at 3 Maiden Lane. They manufactured gold-filled, rolled gold, and sterling silver jewelry and were particularly known for lockets, medallions, and seals.

According to a New York Times article dated September 29, 1914, this wholesale jeweler and manufacturer of gold chains announced their liquidation after being in business for 64 years. Founded in 1850, the firm at 16 and 18 Maiden Lane had assets in excess of $100,000 and liabilities of $50,000 and stated their business was no longer profitable. At the time, the president of the company was Henry B. Singer. 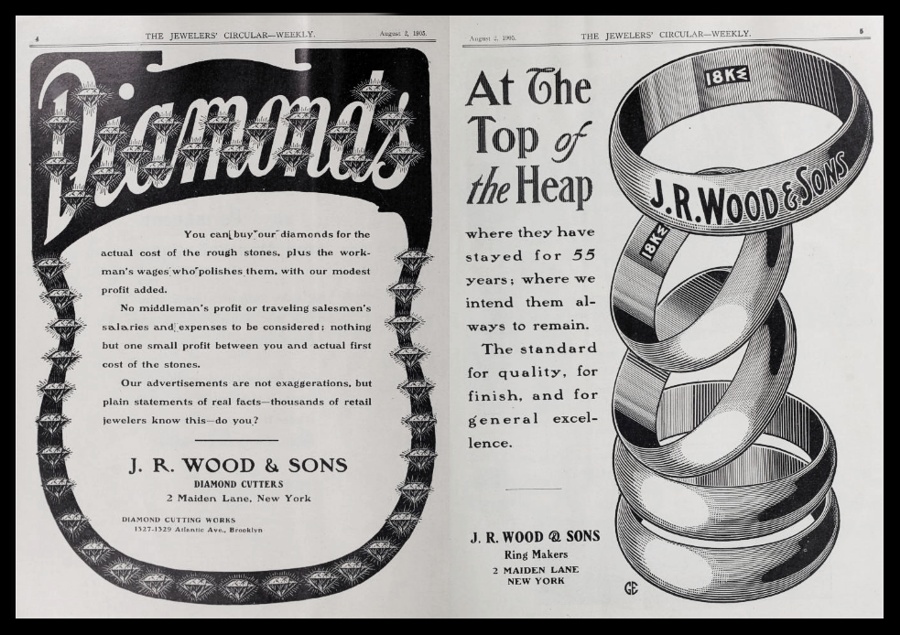 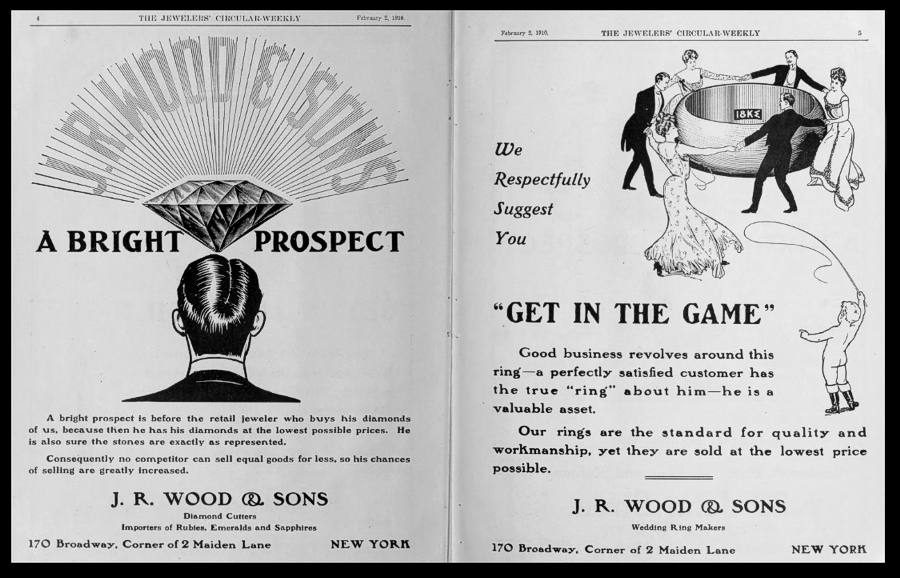 Established in Brooklyn, N.Y. by James R. Wood in 1850, the J.R. Woods production plant remained in Brooklyn, but they had offices at 15 Maiden Lane, as well as 29 E. Madison in Chicago and 3rd and Market Streets in San Francisco. The company merged with Lenox, Inc. in 1970 and changed its name to Art- Carved Inc. in 1975. The now iconic company manufactures beautiful carved wedding bands. As a matter of fact, my first husband and I bought modest bands from this company when we got married in 1981. 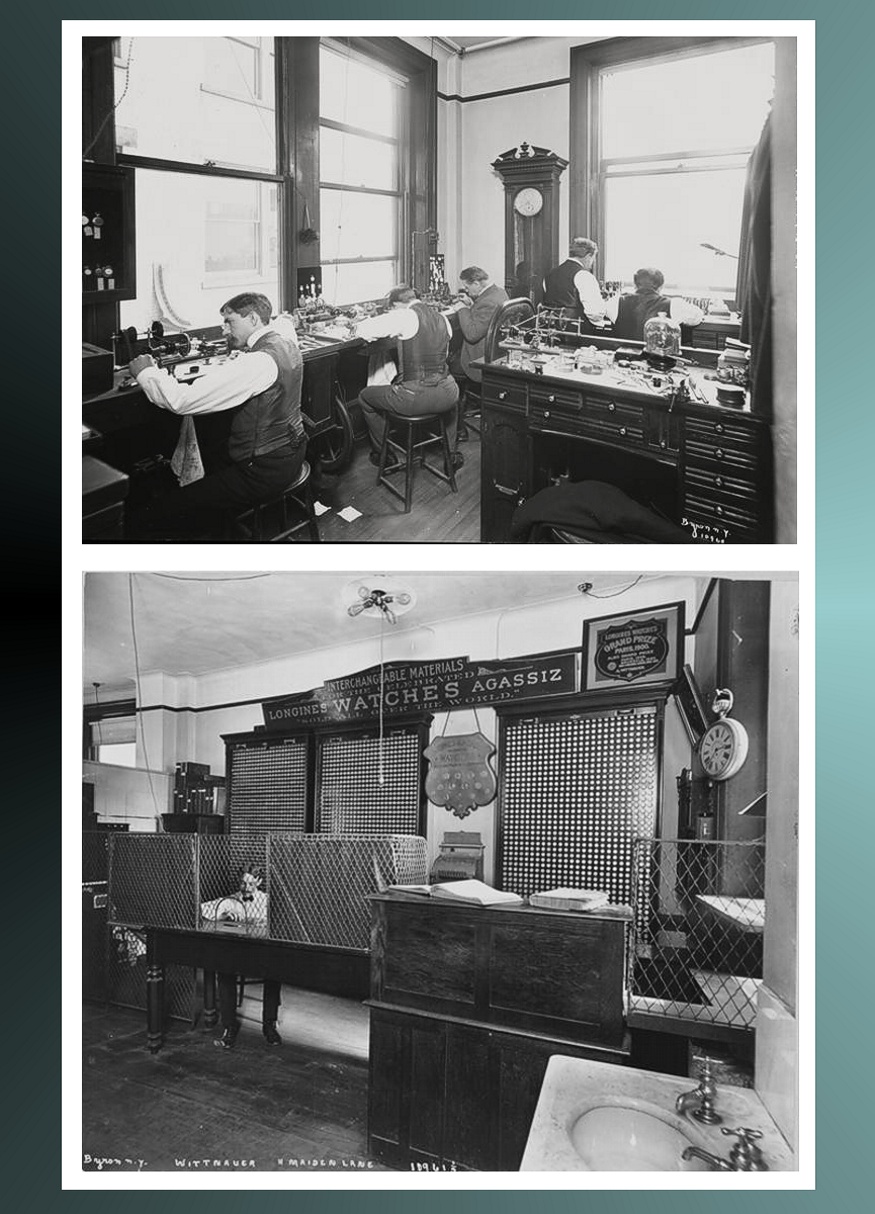 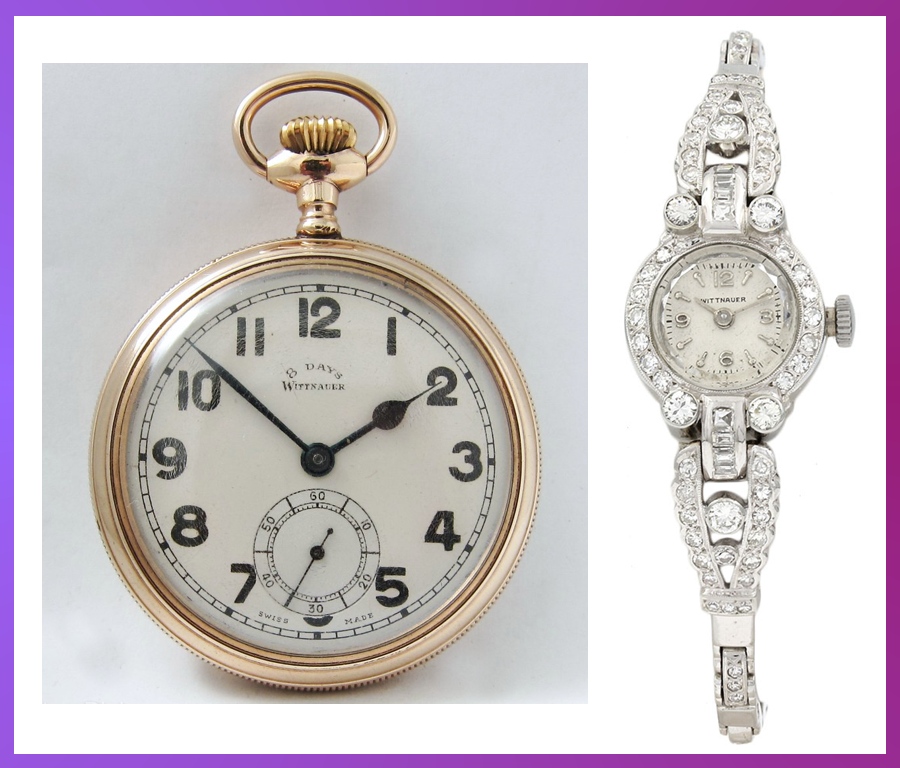 Of all the companies mentioned in this blog, this is the most well-known today because the Wittnauer name still exists. In 1872, 16-year-old Swiss immigrant Albert Wittnauer joined his brother-in-law J. Eugene Robert in NYC in the family watch import business. Although they were importing Swiss watches, he decided there was a market for timepieces that combined durability with style and began creating high-quality, luxurious watches in 1880. Under the leadership of Albert and his brothers Louis and Emile, the A. Wittnauer Co. steadily gained popularity in the U.S. The last Wittnauer brother died in 1916, at which time Martha Wittnauer became the first woman CEO of a watch company. The Swiss company Longines acquired Wittnauer in 1950 and then Bulova bought it in 2001.

I would love to hear from any family members of the jewelry companies mentioned in this blog or any others that once did business on Maiden Lane.