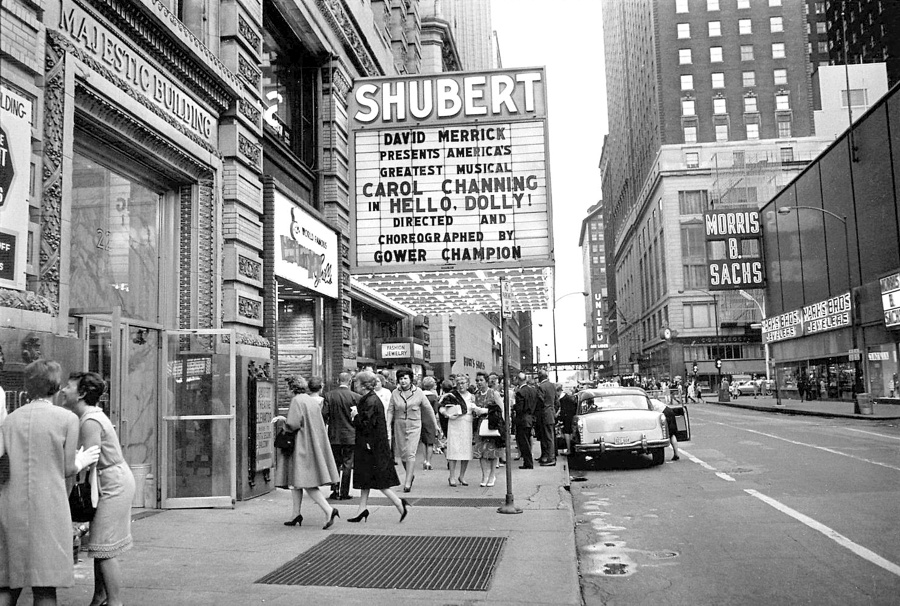 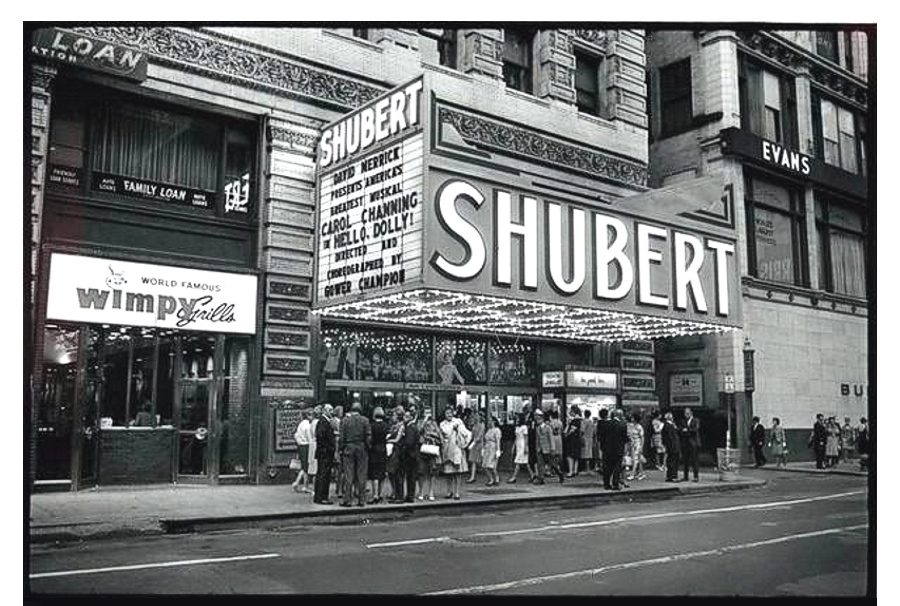 What started out as a blog solely about Wimpy restaurants morphed into a broader blog when I discovered the above photos. What a shame it would be to not write about the Shubert Theatre and other businesses captured in these great photos.

Originally called Wimpy Grills, the Wimpy brand was incorporated on September 12, 1934 by Edward V. Gold, with its first location in Bloomington, Indiana. The name was inspired by the hamburger-loving character J. Wellington Wimpy from Popeye, created by E. C. Segar. Gold opened the first Chicago area restaurant in 1936, after opening grills in five other Midwestern cities. The restaurant on the Northeast corner of Randolph St. and Wabash Ave. was the 10th Wimpy Grill in Chicago and the 25th in the U.S. when it opened in 1940. I don’t know when the location opened on the northeast corner of Clark and Madison, but these photos date back to 1955 and 1958. I wonder how many people grabbed a bite at Wimpy or the Bamboo Inn before going to the renowned Blue Note Jazz Club next door! 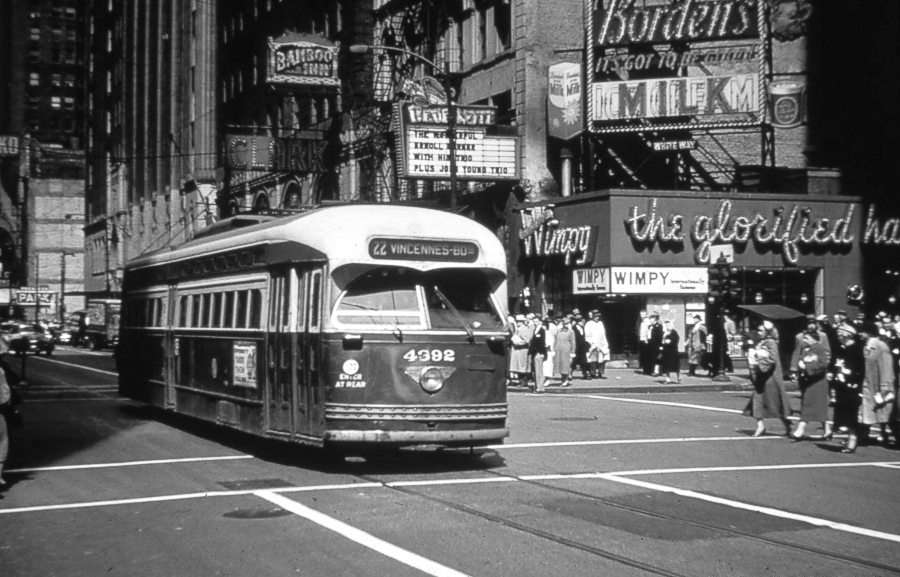 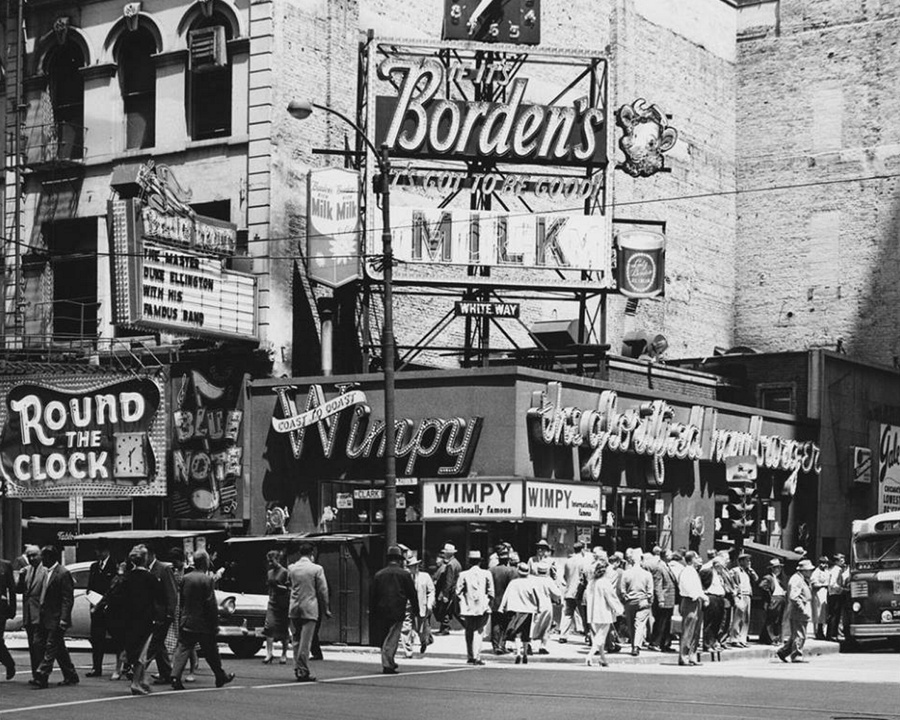 In the 1950s, Gold closed most of the U.S. locations and expanded his operation to Europe, working with J. Lyons & Co., a British catering company. In 1967, he sold the European operations to Lyons, which had more than 1,500 restaurants at that time, while retaining the U.S. restaurants. United Business acquired the UK restaurants in July 1977 and in February 2007, Famous Brands, owner of the Wimpy franchise in South Africa bought out Wimpy UK. As of 2011, Famous Brands operated 509 Wimpy restaurants in South Africa, making it the largest Wimpy franchise. 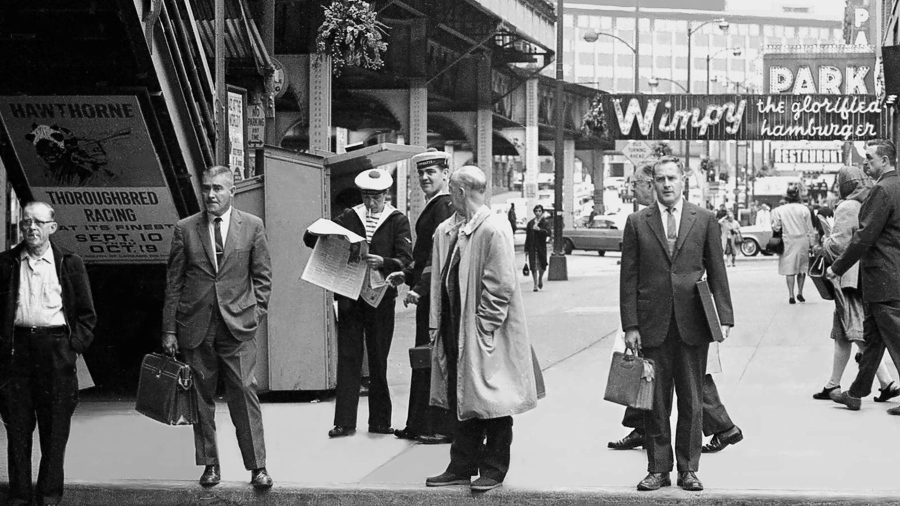 When Gold died in October 1977 at the age of 70, nine Wimpy restaurants in the Chicago area were still in business, including one at Woodfield Mall in Schaumburg and three in the Loop at 17 E. Washington St., 159 N. Wabash Ave., and 20 W. Monroe. The latter was the one adjacent to the Shubert Theater in the photos.  After Gold died, the Loop locations were offered for sale, but were shuttered after no buyers came forth. 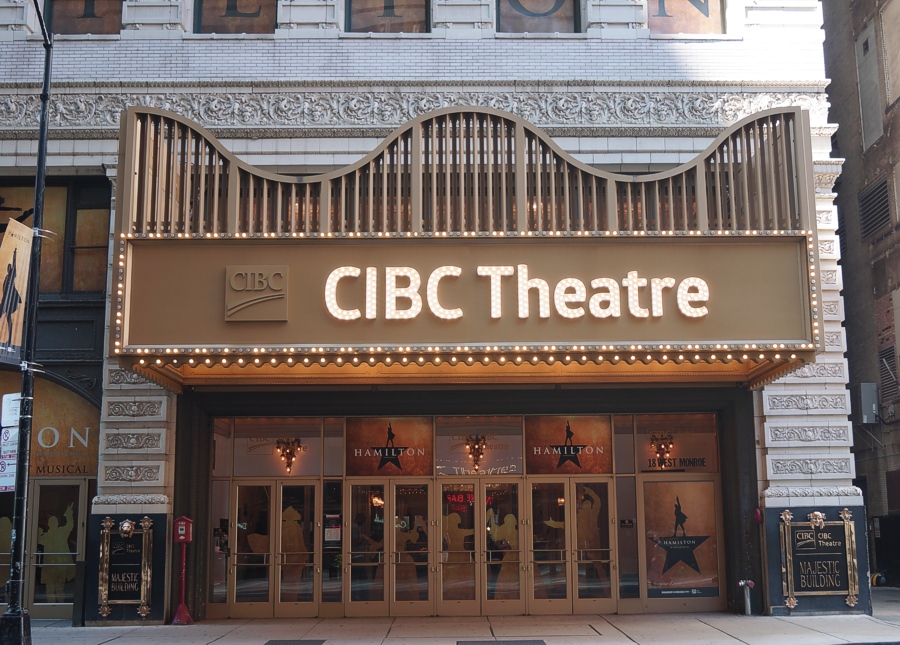 Originally called the Majestic Theatre for the building it was housed in at 16-22 W. Monroe, many famous vaudeville performers headlined here back in the day, including Al Jolson, Eddie Foy, Jack Benny, W.C. Fields, Harry Houdini, Bert Williams, Lillie Langtry, Eddie Cantor, and Fanny Brice. The 20-story building was built by the architect Edmund Krause and Rapp & Rapp did the interior design. Some sources claim that when it opened in 1906, it was the tallest building in Chicago.

The Majestic Theatre closed in 1932 during the Great Depression and the Shubert Organization purchased it in 1945. It was called the Shubert Theatre from 1945 to 2005. Although the Nederlander Organization bought it in 1991, it didn’t change names until it became the LaSalle Bank Theatre, then the Bank of America Theatre in 2008 after they acquired LaSalle Bank. It was renamed PrivateBank Theatre in December 2015 and changed once again to its current name CIBC Theatre, in September 2017. 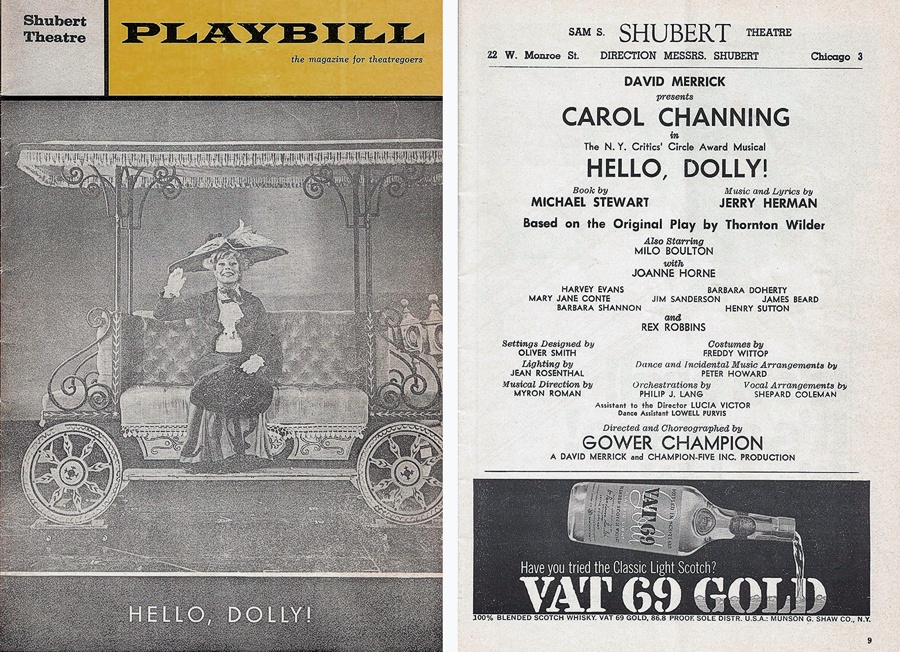 The iconic musical Hello, Dolly! started its run at the Fisher Theater in Detroit on November 18, 1963, prior to opening on Broadway in 1964. Produced by David Merrick, the production won 10 Tony Awards, including Best Musical and Best Leading Actress in a Musical. The late Carol Channing will always be associated with this role, although Barbra Streisand was nearly as iconic in the 1969 movie. The blockbuster musical played in Chicago from January 3, 1966 to December 10, 1966. The 2017 Broadway revival with Bette Midler in the title role officially opened at the Shubert Theatre in NYC on April 20, 2017. 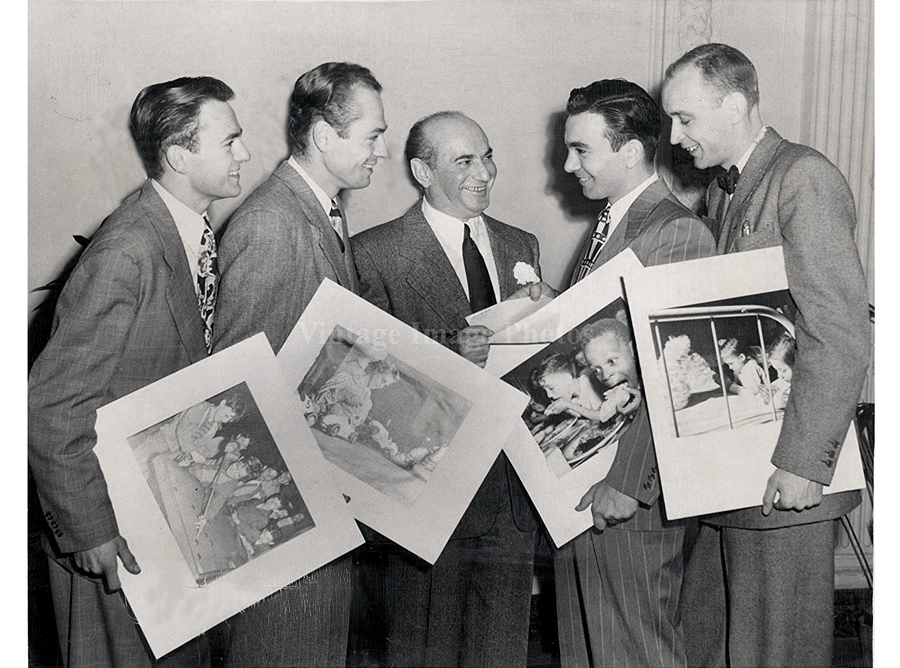 Morris B. Sachs – The Store and Man

Morris B. Sachs was a true rags to riches story, a philanthropist and generous man with incredible integrity. A Lithuanian immigrant and orphan who arrived in Ellis Island by himself in 1910 at age 13, Sachs was supposed to be picked up there by a responsible adult. When he was seemingly abandoned, a compassionate local butcher took Sachs under his wing and sheltered him at his shop, allowing him to sleep near the freezer. It’s unknown how Sachs made his way to Chicago. Still a teenager, he bought a pushcart and a small stock of neckties and started peddling his goods at the Maxwell Street market. He opened his first two-story clothing store in Englewood at 6638 S. Halsted in 1919, which at that time was a neighborhood with Bohemian, Irish, Italian, Lithuanian, and Croatian immigrants. One of the first in Chicago to introduce the “lay away” concept and buying on credit, by 1940, Sachs was so successful, he added three stories and 12,500 square feet to the Englewood store. It was billed America’s largest store of outer wearing apparel for men and women, and the tag line, “Credit with a Smile” was featured on marketing materials.

In 1934, Sachs launched the Morris B. Sachs Amateur Hour. It broadcast from the Civic Opera House, first on radio station WENR, then later on WENR television. Mel Torme, Frankie Laine, and Steve Allen appeared on the show. At the end of the television broadcast, Sachs appeared personally and awarded prizes like Gruen wristwatches to the winning contestants.

In 1948, Sachs opened a second store at 3400 W. Diversey Ave., which with the Englewood store grossed about $8 million in revenue and employed 700 workers. In March 1957, he opened his Loop store at State and Monroe, with stars of ”stage, screen and radio” providing entertainment. This ad implies he had at least two others stores at 9029 Commercial Ave and 431 E. 47th St, although his Chicago Tribune obituary only mentioned three stores. Sadly, the Loop location was his last hurrah because he died just six months later on Sept. 23 at the age of 61. The iconic building housing his store on Diversey is a six-story Art Deco style building encompassing a triangular lot known as the Morris B. Sachs flatiron building. 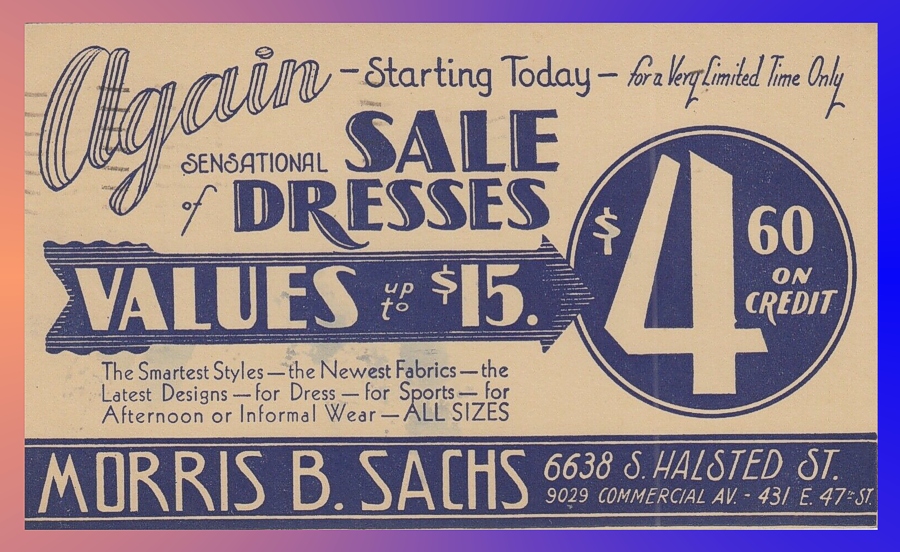 Others Businesses in the 1966 Shubert Images

Marks Bros. Jewelers: A leading American specialty retailer of fine jewelry, this jeweler was founded in 1895, when a group of brothers from Eastern Europe settled in Chicago and opened their first retail store in downtown Chicago. By 1946, Marks Bros. operated five stores in downtown Chicago, making it the largest jewelry chain in the Loop. At the end of 1997, they had 188 stores in 24 states across the U.S. under the names Whitehall Company Jewelers, Lundstrom Jewelers, and Marks Bros. Jewelers. The name was officially changed to Whitehall Jewellers Inc. in 1999. In 2006, Whitehall was bought out by an affiliate of Prentice Capital Management and Holtzman Opportunity Fund.

If you are a native Chicagoan and a Baby Boomer or older, you may remember this shoe store. I bought what I thought were cool, clunky chunky platform heel shoes there around 1974. Burt’s was a subsidiary of Edison Brothers Stores, along with Bakers, Chandlers, and Wild Pair, which were likely more well-known shoe stores in Chicago than Burt’s. Edison Brothers filed for bankruptcy in 1995.

In 1929, Abraham Meltzer founded Evans Furs, opening a small store at 162 N. State St. By the early 1980s, his son David decided to aggressively expand Evans, establishing new stores in metropolitan Chicago and other select cities across the U.S. They also sold Evans furs in salons located in major department stores. Back then, Evans, Inc. had fur salons in Washington, D.C., New Orleans, Las Vegas, Dallas, and Oklahoma City. This expansion inevitably led to the company’s demise. From 1996 to 1999, the company lost money and in the summer of 1999, the management team decided to sell remaining Evans stores in the Chicago area and concentrate on department store salons.

As always, would love to hear from anyone with personal memories of the businesses featured in these photos and blog!