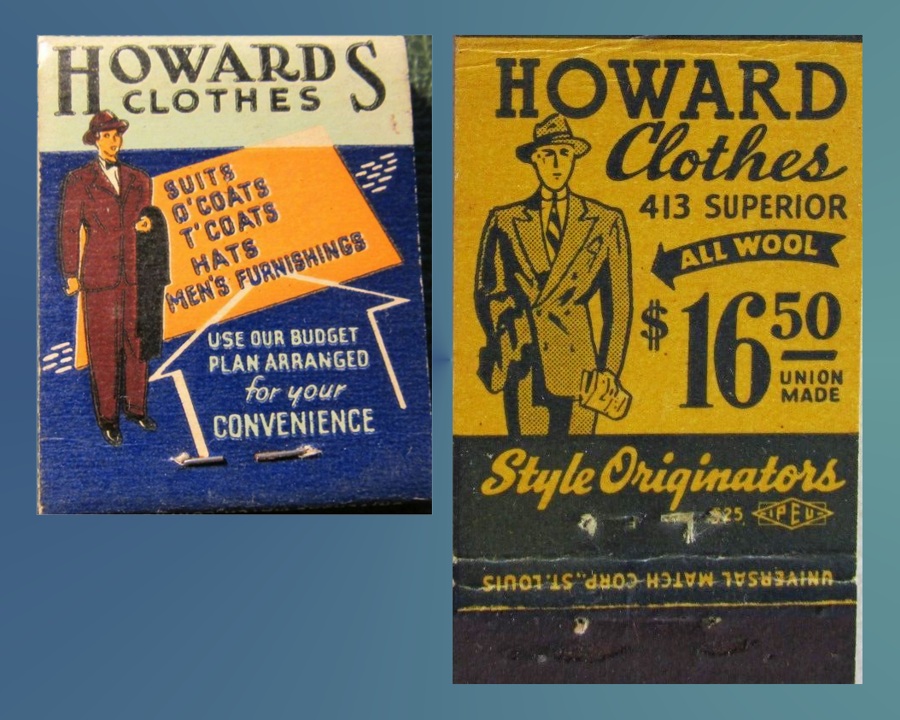 When I wrote the second article, Howard Clothes Tribute: Epilogue in January 2016, I thought I was done. Yet, this is still a topic of discussion in my family and clearly resonates with others, given the ongoing comments. As the sole surviving child of Samuel and Minnie Kappel, Elaine Winik provided a great deal of insight for the second article, as did her book Still Looking Forward, published in 1996. Elaine, who sadly passed away in September 2017, was a pillar of the Jewish community with a deep passion for and commitment to Israel. This article is dedicated to Elaine, her family, and all the relatives of the owners.

In the last four years, I uncovered additional images and intriguing facts about Howard Clothes worthy of this final third article. The image below was being sold on eBay and I shared it with Elaine’s family members on Facebook. Unfortunately, nobody recognized anybody in the photo. Given the caption, I’m guessing this was a gathering for employees of one of the Brooklyn stores, rather than the factory. 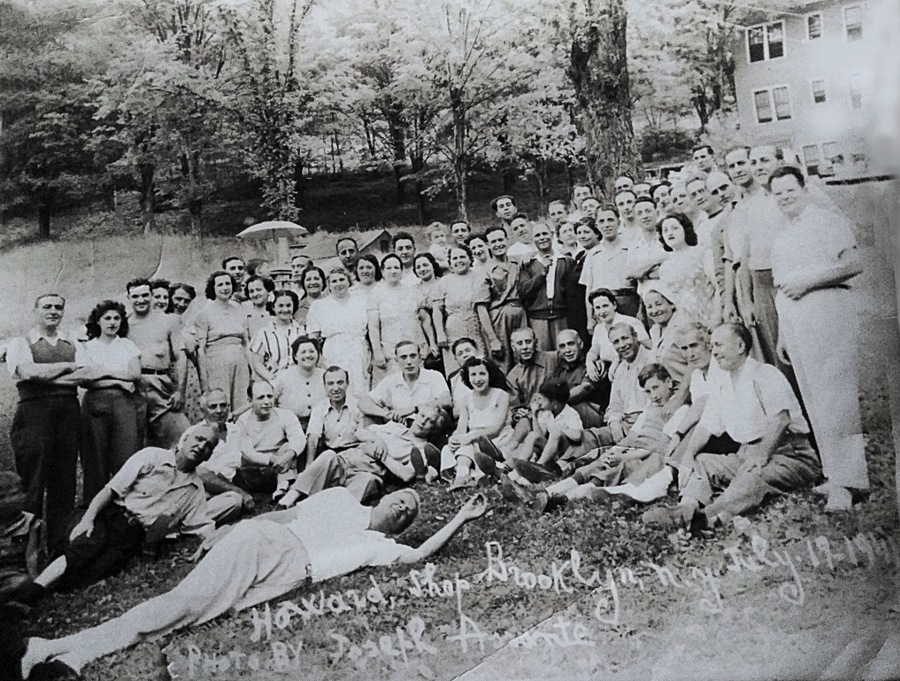 The second photo is an undated Magic Lantern slide being sold on eBay. The back of the slide reads: A section of the Hand Sewing Department where the careful tailoring of our most skillful tailors is reflected in the fit and finish of Howard Clothes. It’s not a great photo technically, but it certainly has historic importance. I’m guessing it was taken in the 1940s or 1950s, given the media it was created on. 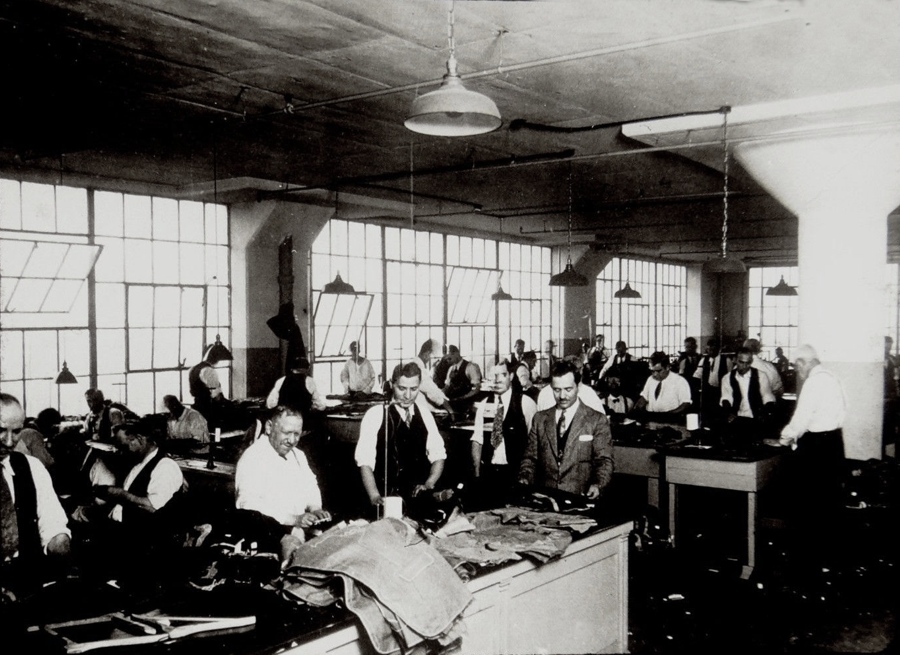 A Chicago Tribune article dated June 2, 1936 revealed that Howard Clothes made its first foray into the Midwest market with a store at the northwest corner of State and Quincy Streets in the Consumers Building at 220 South State Street. I found this great photo online depicting the State Street store. 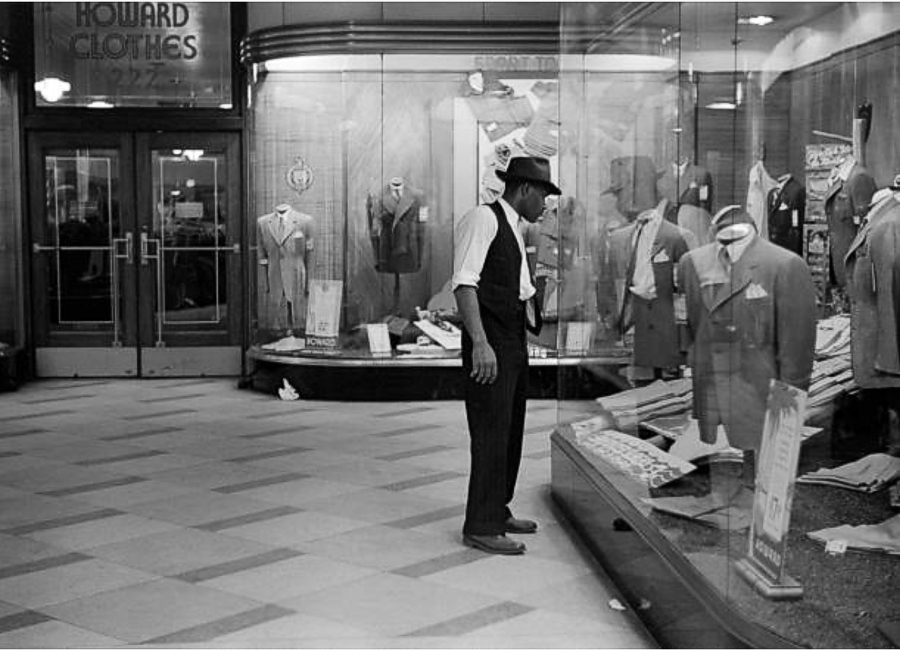 Howard Clothes was mentioned in The New York Times with some frequency. An interesting article dated December 19, 1941 confirms my thoughts about the somewhat blurry photo below. The seller thought it might be in Cincinnati and dated it 1930 to 1939. It’s clearly in Midtown Manhattan and The New York Times article proves the photo was taken prior to the store moving to 48th Street and Broadway in December 1941. From a historic standpoint, the 48th Street store’s grand opening was 11 days after the Japanese attacked Pearl Harbor, and of course, just 10 days after the U.S. formally entered World War II. 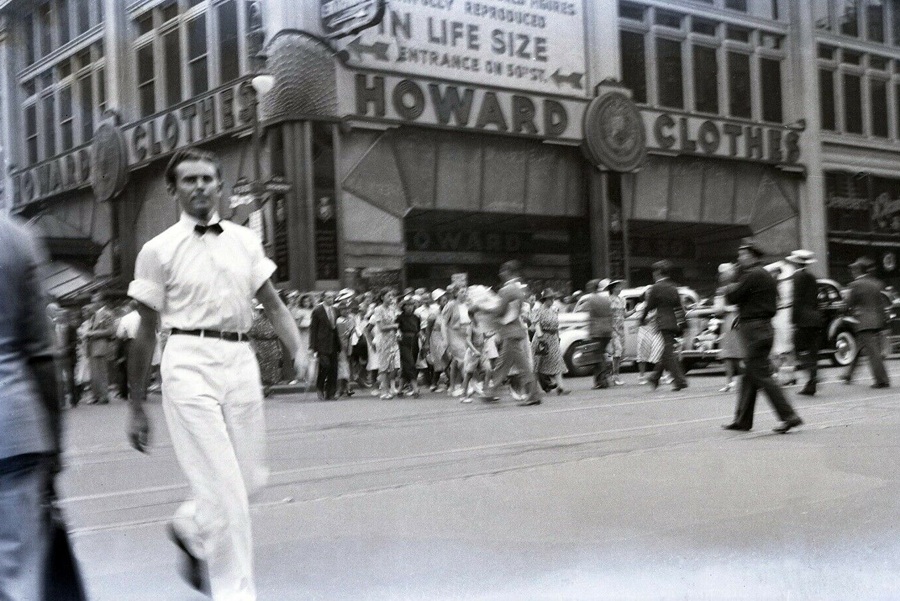 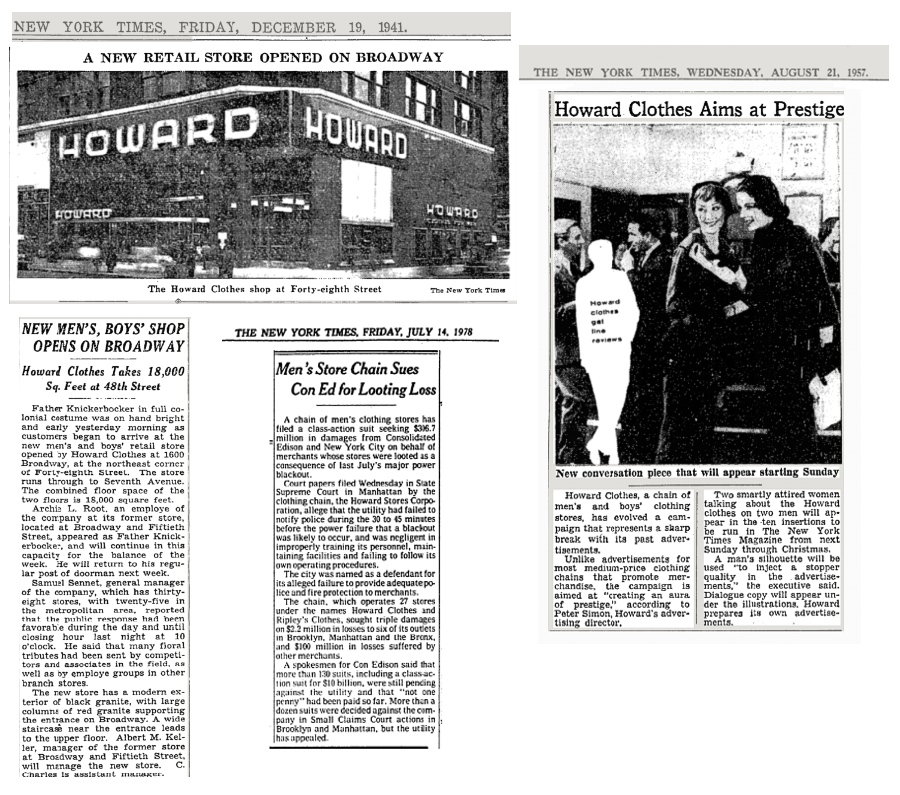 Father Knickerbocker in full colonial costume was on hand bright and early yesterday morning as customers began to arrive at the new men’s and boys’ retail store opened by Howard Clothes at 1600 Broadway, at the northeast corner of 48th Street. The store runs through to Seventh Avenue. The combined floor space of the two floors is 18,000 square feet.

Archie L. Root, an employee at its former store, located at Broadway and 50th Street, appeared as Father Knickerbocker, and will continue in this capacity for the balance of the week. He will return to his regular post of doorman next week.

Samuel Sennet, general manager of the company, which has 38 stores, with 25 in the metropolitan area, reported that the public response had been favorable during the day and until closing hour last night at 10 o’clock. He said that many floral tributes had been sent by competitors and associates in the field, as well as by employee groups in other branch stores.

The raw store has a modern exterior of black granite, with large columns of red granite supporting the entrance on Broadway. A wide staircase near the entrance leads to the upper floor. Albert M. Keller, manager of the former store at Broadway and 50th Street will manage the new store. C. Charles is assistant manager.

Howard Clothes was a sponsor of New York Giants baseball games and later the Yankees. The former started in NYC in 1885 as the New York Gothams, changed their name two years later and remained in NYC until they relocated to San Francisco following the 1957 season. During most of their 75 seasons in NYC, the Giants played home games at various incarnations of the Polo Grounds in Upper Manhattan. 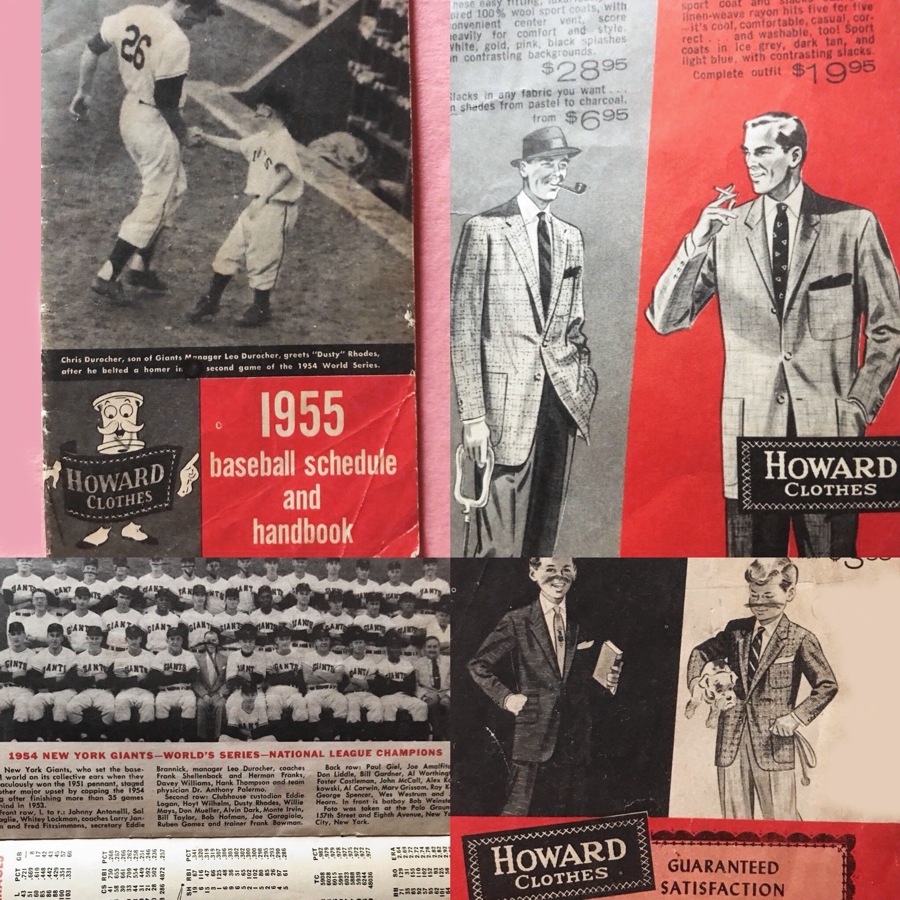 The NYC blackout affected most of New York City on July 13–14, 1977. Looting and vandalism hit 31 neighborhoods, with 75 stores on a five-block stretch in the Crown Heights neighborhood of Brooklyn suffering losses. At one point, two blocks of Broadway separating Bushwick from Bedford-Stuyvesant were on fire due to arson. Thirty-five blocks of Broadway were destroyed, 134 stores looted, and 45 of these were set ablaze. 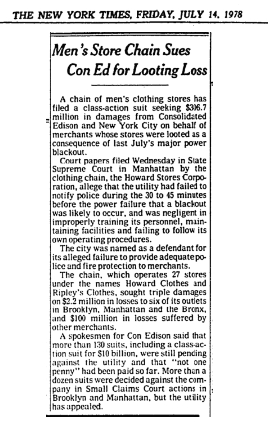 The following year, Howard Stores Corporation filed a lawsuit alleging that Con Ed failed to notify police during the 30 to 45 minutes before the power failure that a blackout was likely to occur and was negligent in other areas. The chain, which operated 27 stores under the names Ripley’s Clothes and Howard Clothes in 1978, sought triple damages on $2.2 million in losses to six of its stores in Brooklyn, Manhattan, and the Bronx, and $100 million in losses suffered by other merchants. According to Con Ed, this was just one of 130 lawsuits related to the blackout – and as of July 14, 1978, the utility company hadn’t paid a penny in restitution. In June 1982, a State Supreme Court justice ruled that ”gross negligence” on the part of Con Ed caused the 1977 blackout in NYC and that a trial must be held to determine what damages may be owed to the city.

Thank you to Don Goldstein for sharing details about his family’s close ties to Howard Clothes. Don’s grandfather Abe Goldstein was one of the founders of the Amalgamated Clothing Workers. He started working at Howard Clothes some time in the 1930s. He became the shop steward, and therefore was responsible along with management for ensuring relative labor peace. Subsequently, his uncles Joe Jetter and Norman Golden worked in the factory as did his grandmother Shirley Rubin. His father Murray Goldstein started as a shipping clerk before the war and after the war was a fitter. He then rose up through the union as a dues clerk, business agent, assistant manager of the New York Joint Board and finally as co-manager and a vice president of the Amalgamated Clothing and Textile Workers Union. Don’s brother worked one summer during college at the Howard Clothes Corporate Office. And Don worked one night a week and on Saturdays as a stock boy at the Howard Clothes store on Fulton Street in downtown Brooklyn. The week that Murray Goldstein died in 1998 was the same week that the huge Howard Clothes sign on the roof of the building was finally taken down.

The below photos picture Murray Goldstein, about 23-years-old, circa 1938 at the Howard Clothes factory, from The Book of the Amalgamated in New York 1914-1940. And with Mayor Abe Beame, about 1975. (Photos courtesy Don Goldstein) 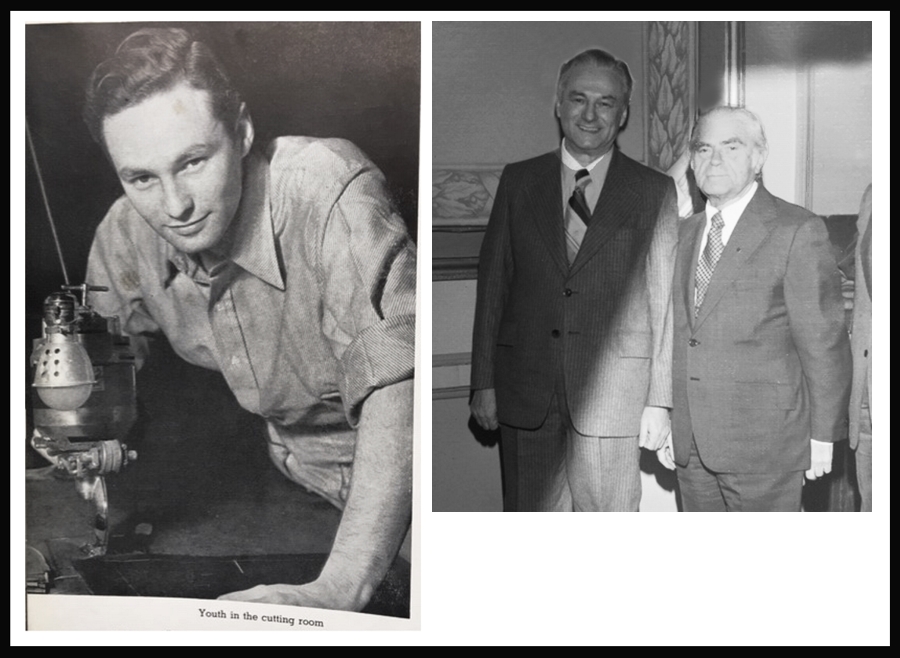 It’s a testimony to quality that so many Howard Clothes suits, blazers, and other fine pieces of attire are still being sold in the secondary market today. They were clearly tailored with a great deal of love and care – who knows, perhaps a piece of clothing my grandfather helped create still exists today!