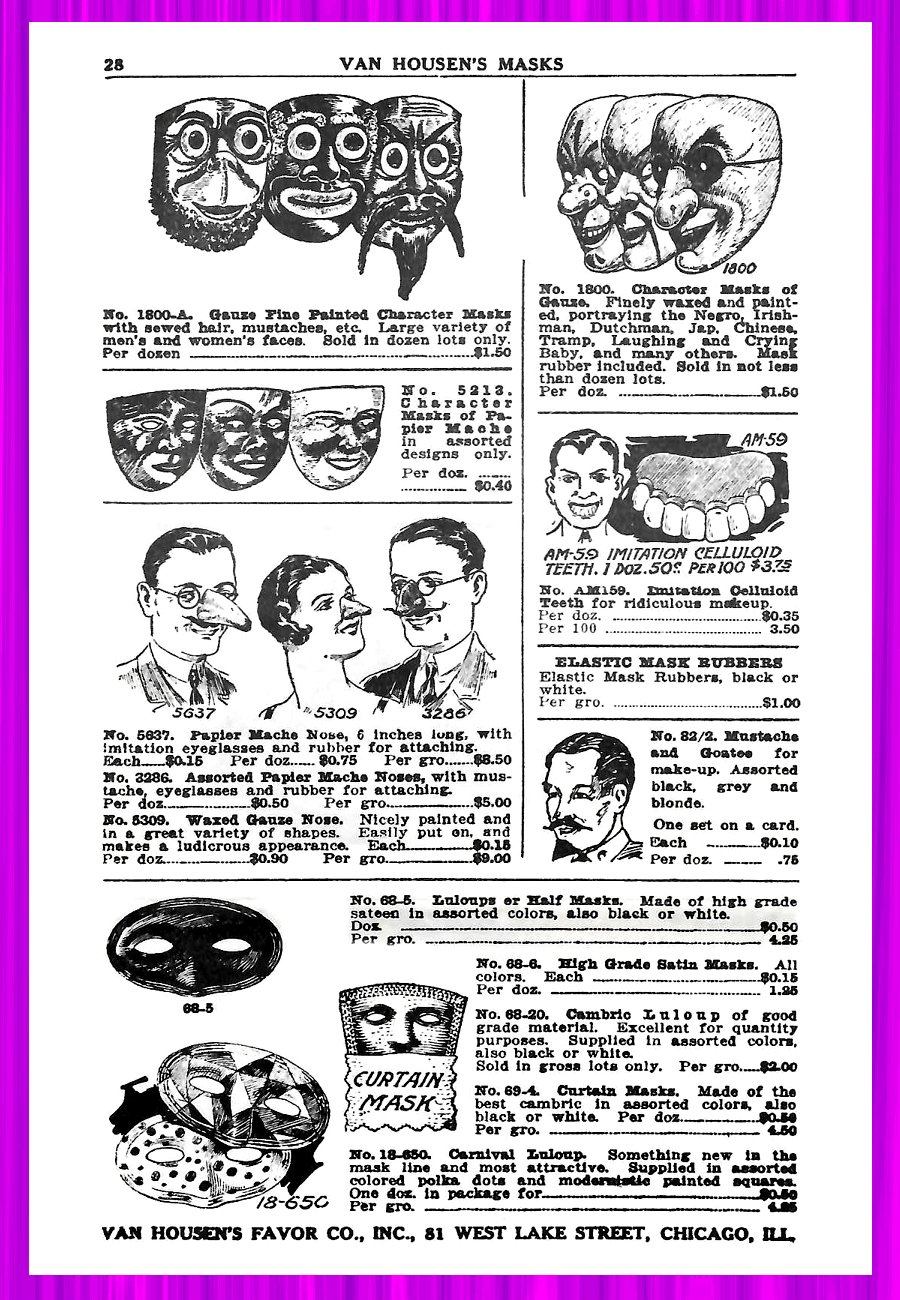 My friend Barbara recently sent me a stack of old student newspapers from our days at the Rhode Island School of Design (RISD). Perusing these was an enjoyable trip down memory lane and I certainly plan on mining these for future RISD and Providence-related blogs. I uncovered a completely unrelated, unexpected, and delightful surprise in the October 28, 1977 Halloween issue. Lo and behold, one of the contributors included visually-intriguing catalog pages from Van Housen’s Favor Co., Inc. My assumption is that they found this in the RISD clipping room (now called the Picture Collection), a wonderful historical archive of all sorts of paper ephemera. Naturally, the cool-looking graphics beckoned to the sleuth in me and I had to do further investigating.

Van Housen’s was a Chicago-based company located at 81 W. Lake Street. Their primary competitor was Dennison Manufacturing Company which was founded in 1844 by Colonel Andrew Dennison. They opened their first store in Chicago in 1864, with subsequent store openings in the 1870s in Boston, New York, and Philadelphia. Although Dennison already had a longstanding reputation for manufacturing high-quality paper goods, it was crepe paper decorations that set them apart. If you recognize the Dennison name, it’s likely because the company merged with Avery International Corp. in October 1990. 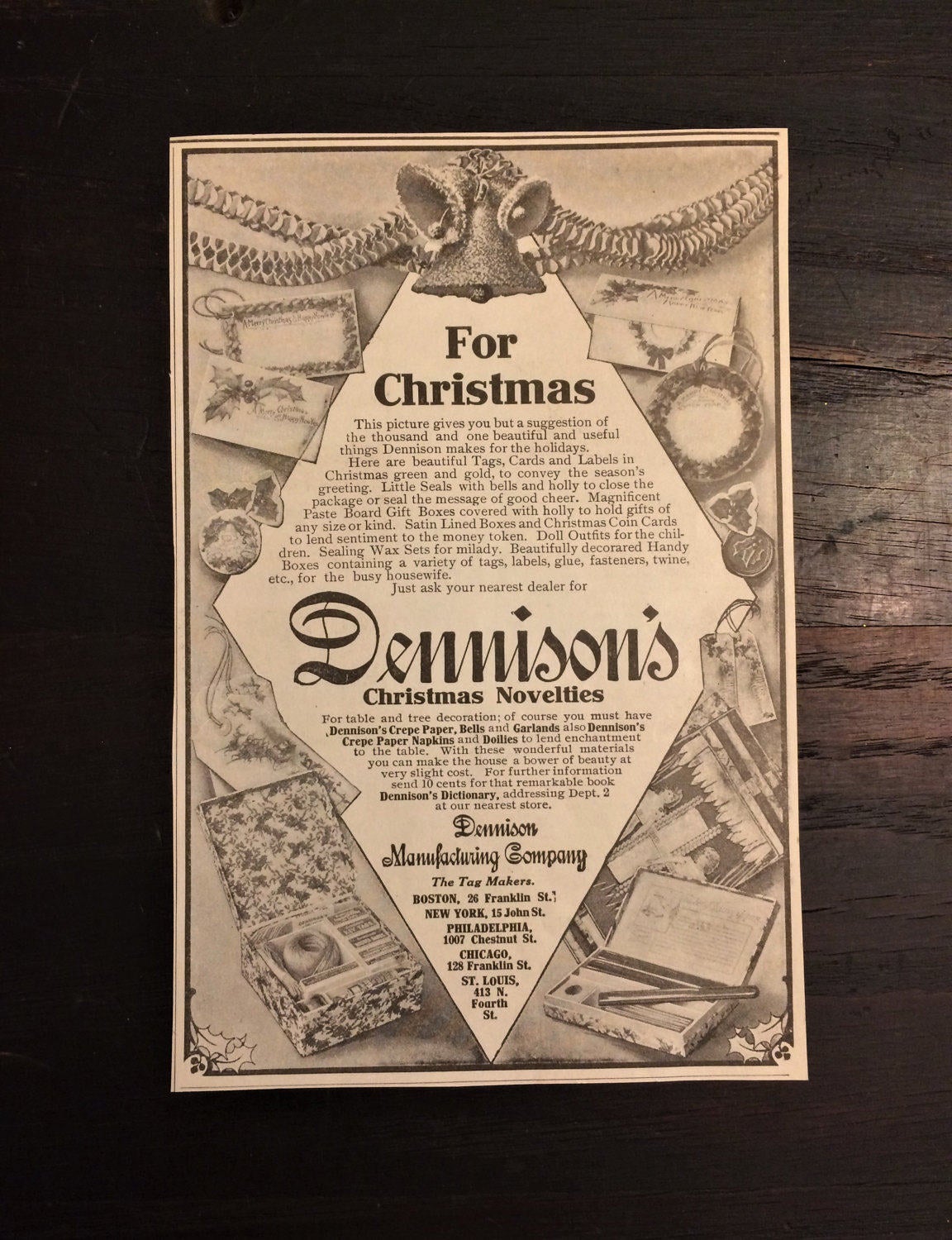 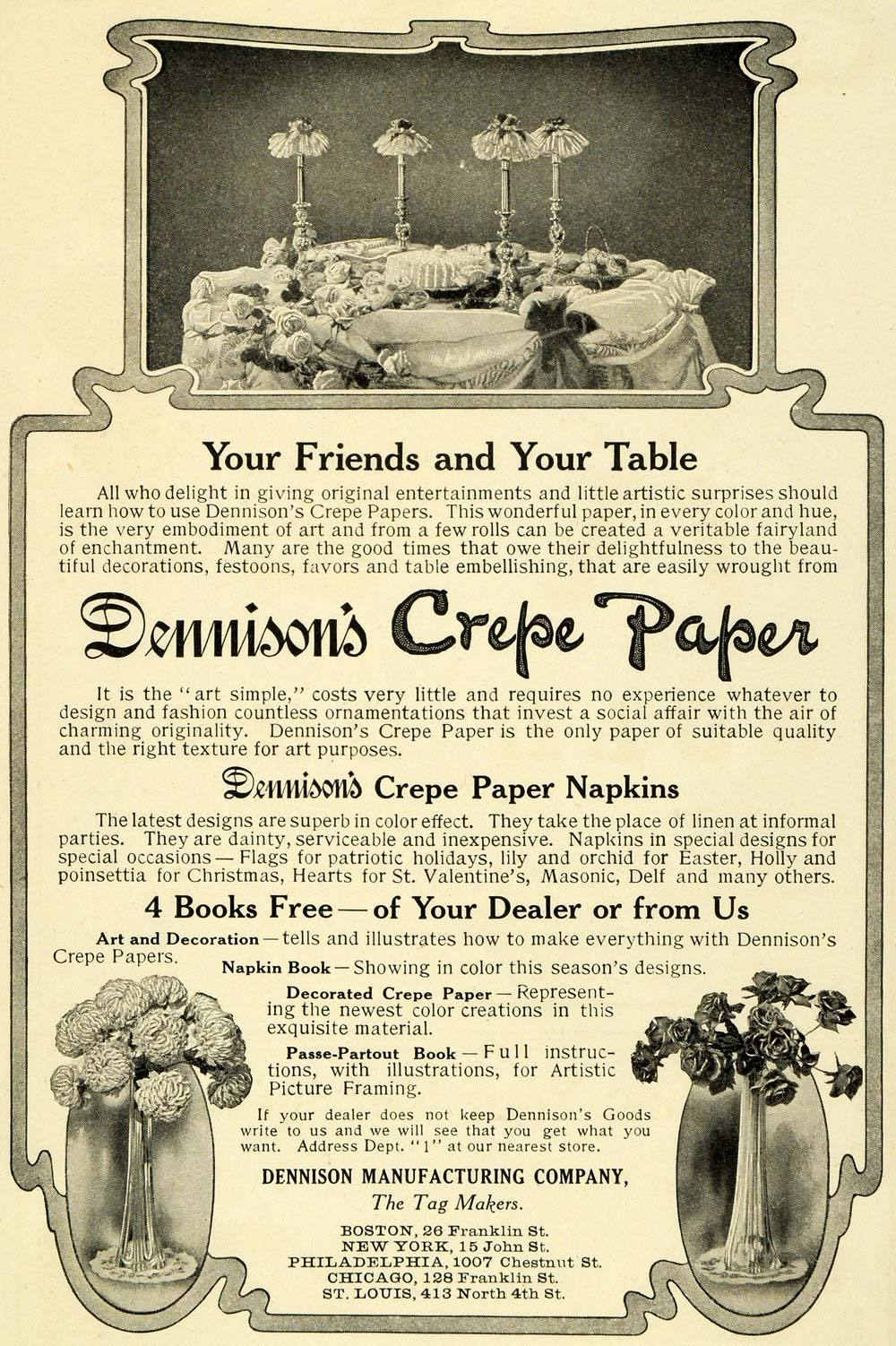 I couldn’t find definitive dates when Van Housen’s was in business, but I did uncover ads from 1922, 1923, 1924, and the 1930s. I also uncovered an interesting article on crepe paper decorations that appeared in the Autumn 1924 issue of Fort Dearborn Magazine, with excerpts below:

During the holiday season when entertaining is the order of the hour, many a social affair is given festive background by the use of appropriate crepe paper decorations, favors and novelties. While the demand for crepe paper products is so great that they may be said to represent an all-the-year-round industry, conservatively, estimated to amount to $1 million annually, it is at this season of the year that they reach their highest point of consumption.

These paragraphs are about Van Housen’s …

In a Chicago factory which specializes in the manufacture of fancy paper hats, serving cups for nuts and candy, favors, flowers and other decorations of many variations, some of the manufacturing processes were noted recently.

In the case of the nut cups, the handle is first attached to the container by means of a stapling machine. Sometimes wire is used for the handles, having previously been wound with crepe paper to match the color of the container. In others, paper rope handles are used, which are made on the machine which stretches and twists two pieces of crepe paper together, forming a paper rope, which is as strong as hemp. It is made in fifteen feet lengths, and then cut up into the shorter lengths to suit requirements. 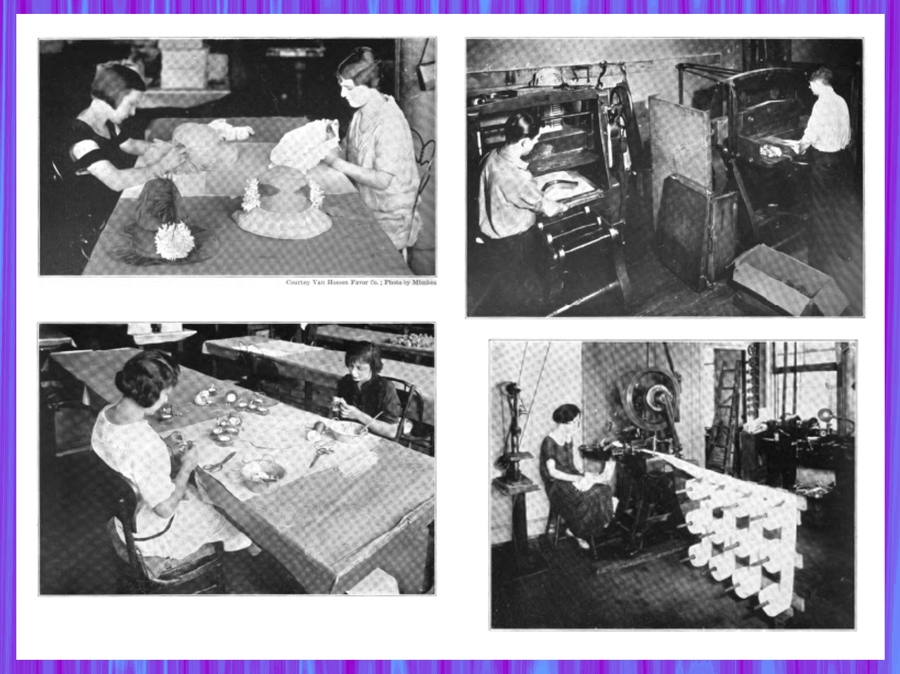 The cup is then placed on the spool; the outside of the container is covered in paste in readiness for the ruffle, and the operator turns the spool and adjusts the ruffle. Then the ribbon and flower are put on, and the finished product is ready for inspection. And what a pretty little sight these little cups present in their brightly colored wrappings, looking for all the world like so many miniature flower baskets!

Many beautiful hats are made in this factory, and by the homeworkers, of whom there are hundreds scattered across the city. In the latter case, the workers only receive one lesson; bands and trimming are supplied and they assemble the completed product at home. From 3,000 to 5,000 of these hats alone are produced by homemakers for this factory annually. 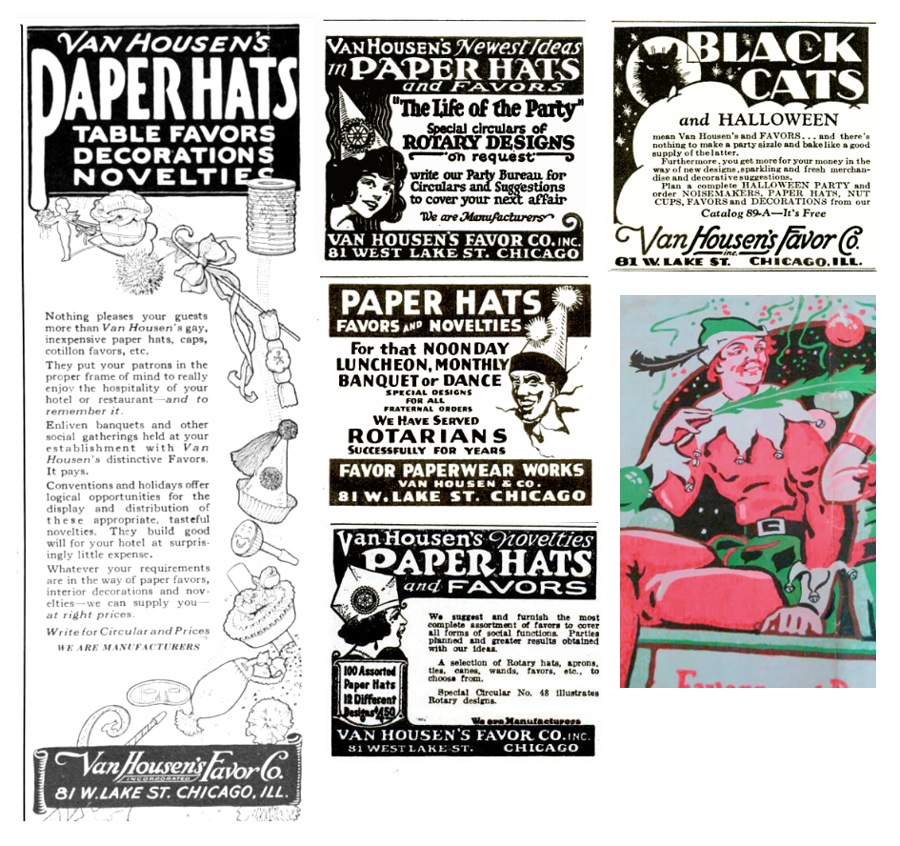 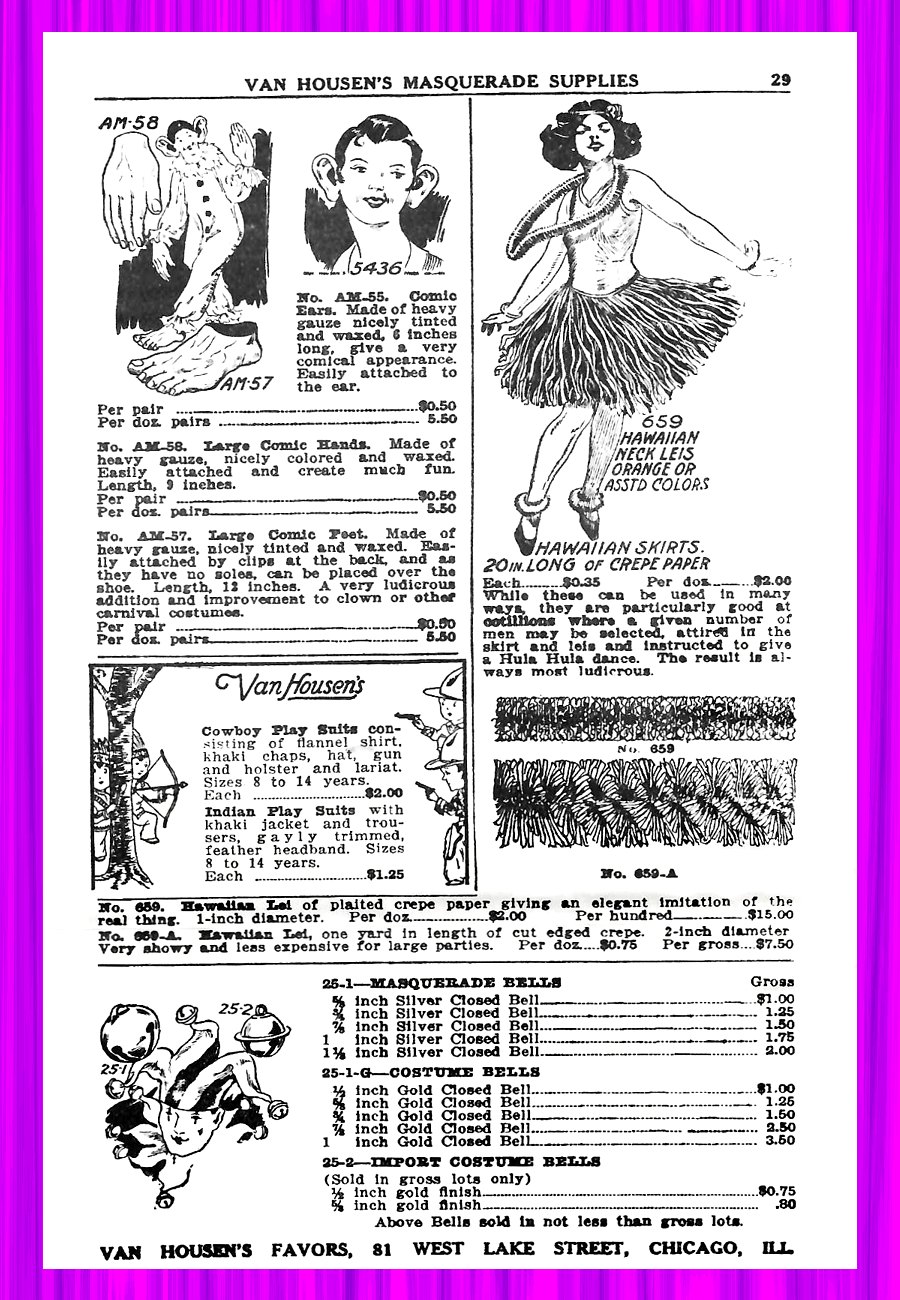 Fancy hats of crepe paper are used for cotillion dances, for Halloween, New Year’s Eve, and other festive occasions, and some for advertising purposes. They form one of the biggest items of the industry and at a certain Chicago factory, the founder of which was the originator of them, more than a million of these hats are produced annually.

Now I’m picturing all of these women making hats in their modest apartment dwellings throughout Chicago. I wasn’t thinking about this aspect until I read the article. I was simply admiring the cool visual aspects of Van Housen’s products and wishing I owned some.

That’s it in a nutshell, or nut cup … a little piece of Chicago, lost to history, except for the occasional piece offered for sale on the secondary market.