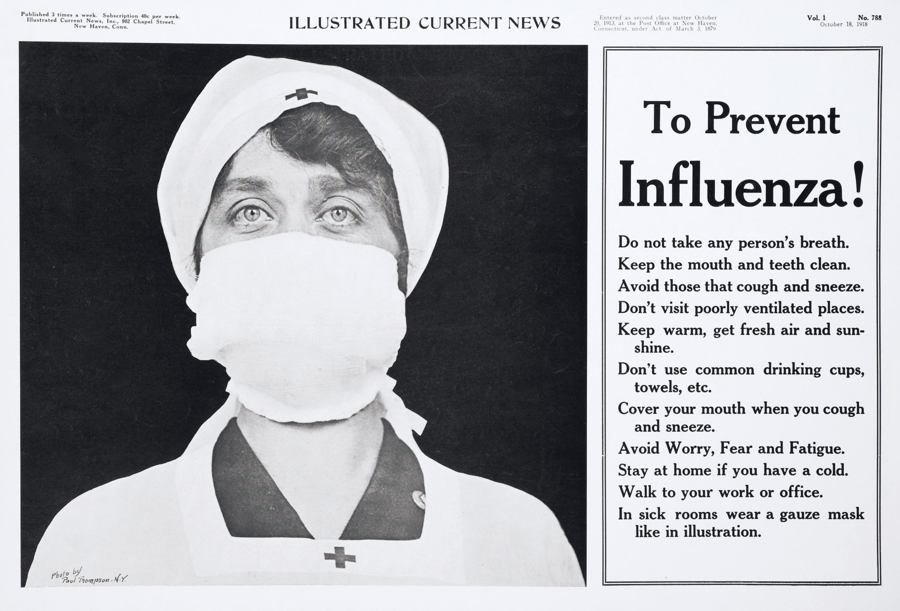 Prevention Tips, October 18, 1918 issue of Illustrated Current News… the first one is worded rather oddly!

It feels a little like the Twilight Zone right now, but unfortunately, this isn’t a fictional nightmare. As the COVID-19 (coronavirus) takes a huge health, economic, and psychological toll, many media outlets and bloggers are making insightful comparisons to the influenza epidemic of 1918. Prior to finding countless current articles comparing the worst flu epidemic in history with the coronavirus, I decided to mine historic photos to see what they revealed. I discovered that efforts to stop the 1918 epidemic were quite remarkable, all things considered. While 100+ years of insights, knowledge, progress, and sophistication in every facet of life in the developed world have transformed life so significantly, some things never change. Despite incredible advancements in science and medicine, many of the precautions are the same today as they were back then. The one semi-political comment I’ll make is that President Woodrow Wilson was a highly skilled leader – no comment about you know who, because once I start, I won’t stop and raising my blood pressure isn’t helpful.

Medical quackery and cures were all the rage 100 years ago, which in a sense can be compared to scams today. Jim Baker you’re a flimflam man and jerk! And sadly, in times of crisis, the number of scam artists seems to proliferate. 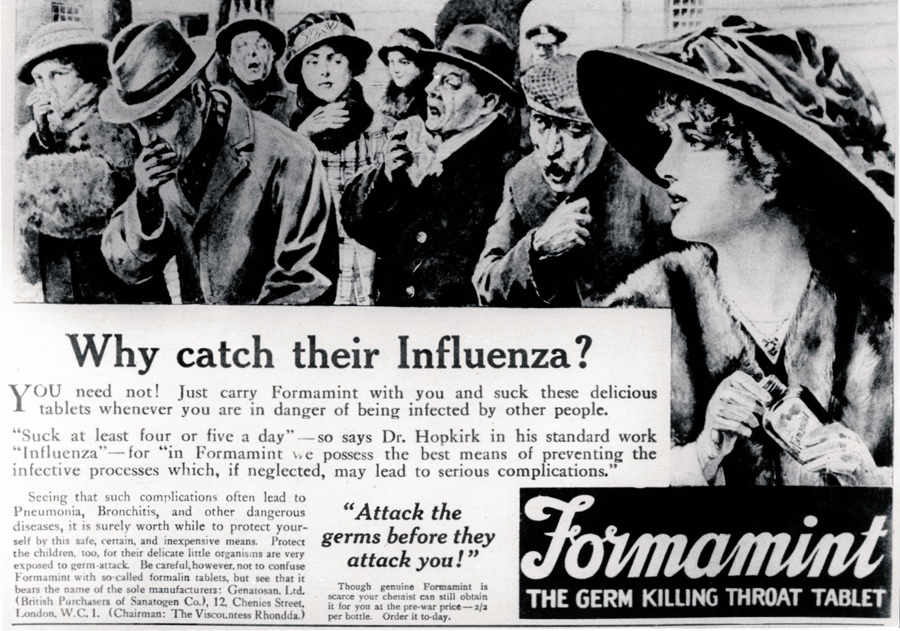 In any case, rather than attempting to compete with all the other blogs, I’m presenting a few interesting facts and photos that are a testament to the resourcefulness of our ancestors.

A Few Facts and Stats

The 1918 influenza epidemic didn’t originate in Spain. It was dubbed the Spanish flu because Spain was neutral during WWI and as such, didn’t have to censor its news for morale. Thus, Spanish news outlets had no issues publicizing the flu outbreak in all its gory details.

One theory suggests it started in NYC. Other experts hypothesize the outbreak may have started among soldiers at Army camps in France or Fort Riley, Kansas, where the first American cases was recorded in March 1918. There were several waves of the Spanish flu and it’s a documented fact that the second wave of the mutated virus rapidly spread among wartime troops. This isn’t surprising considering soldiers on the Western Front were living in cramped, dirty, and damp conditions that made them vulnerable to illness.

More recent theories suggest the Spanish flu originated somewhere in northern China in late 1917 and 140,000 Chinese laborers who were performing manual labor in Europe to free up troops for wartime duty rapidly spread the disease. China – if that’s true, what an incredible coincidence 100 years later! 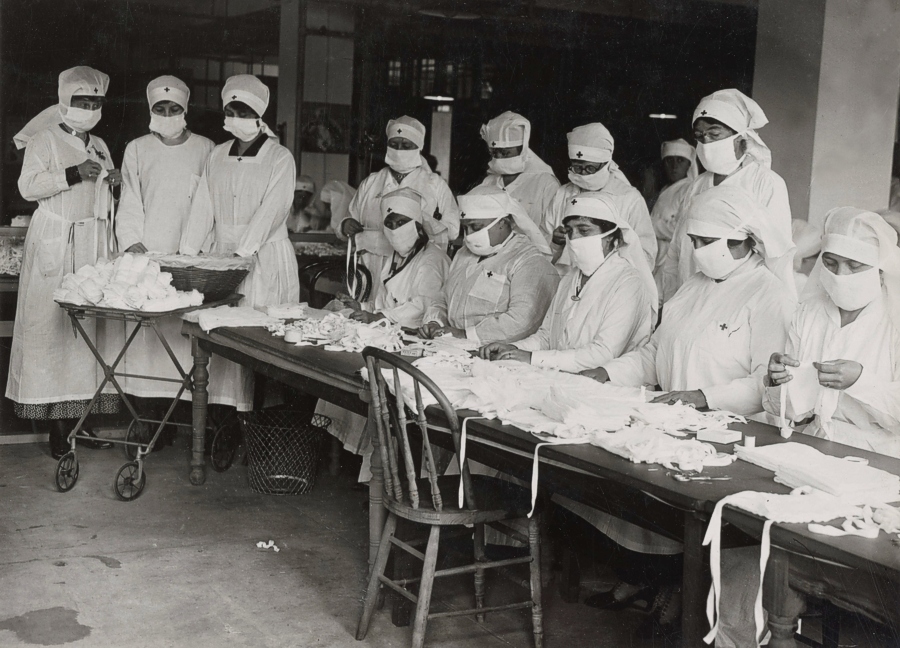 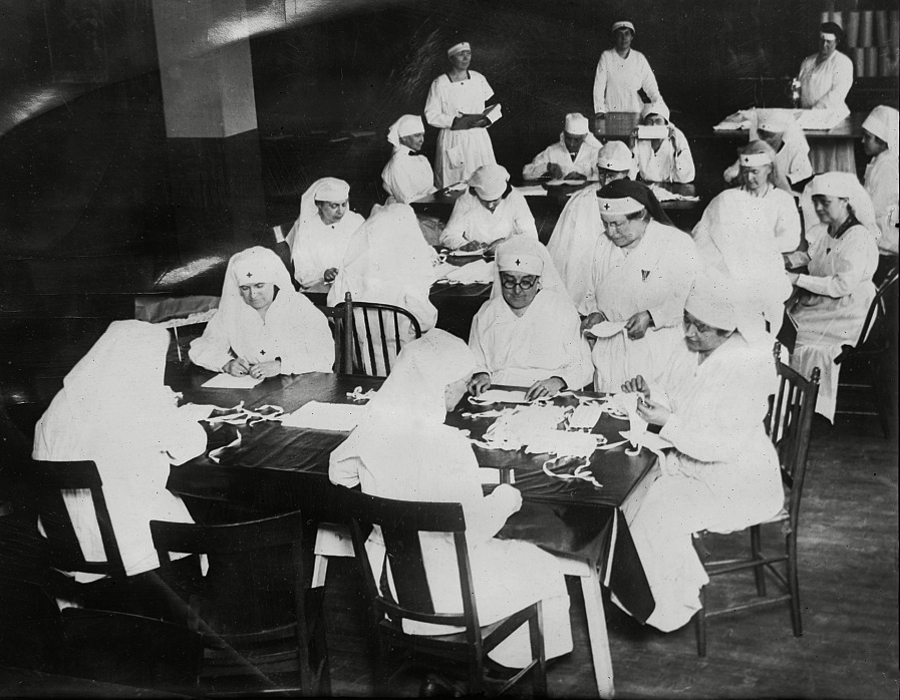 Female Red Cross workers prepared medical supplies and hospital equipment to be used by the NYC Health Department. The organization of chapter units was so impressive, the first call for supplies enabled the Red Cross to mobilize its workers immediately. This meant that the seven health zones designated by the Health Department were kept steadily reinforced with necessities. Throughout the 216 chapters of the Atlantic Division and everywhere else in the country, Red Cross women cooperated with health officials to address the public health emergency. 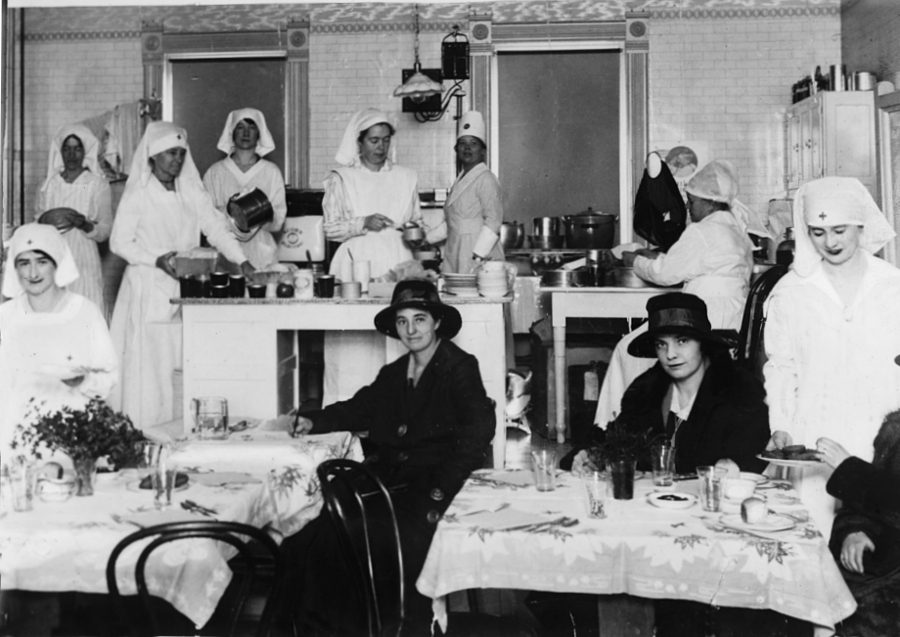 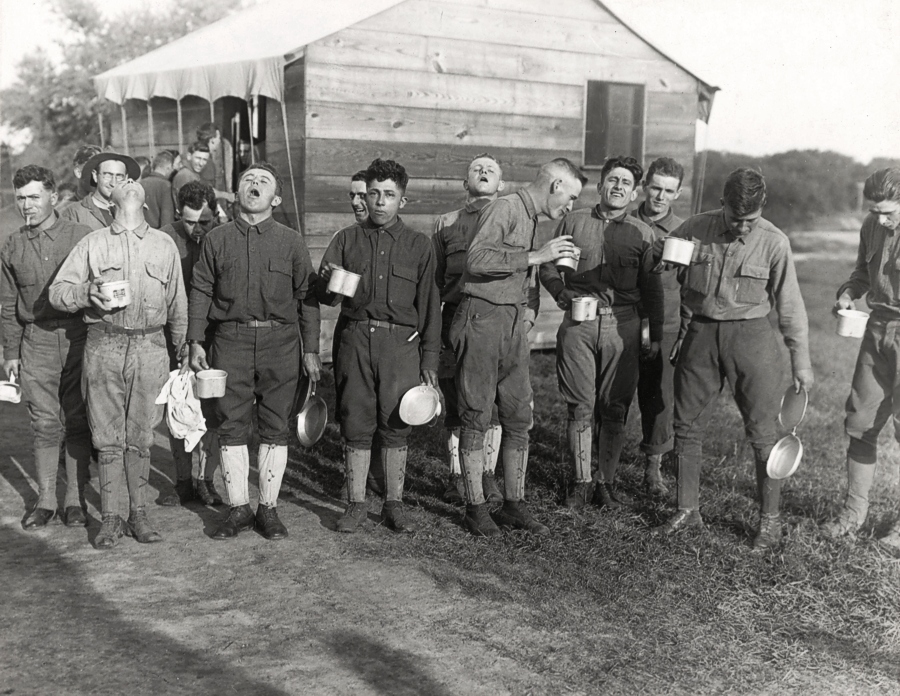 Men gargling with salt water to protect against influenza after a day working in the War Garden at Camp Dix (Date: September 24, 1918) 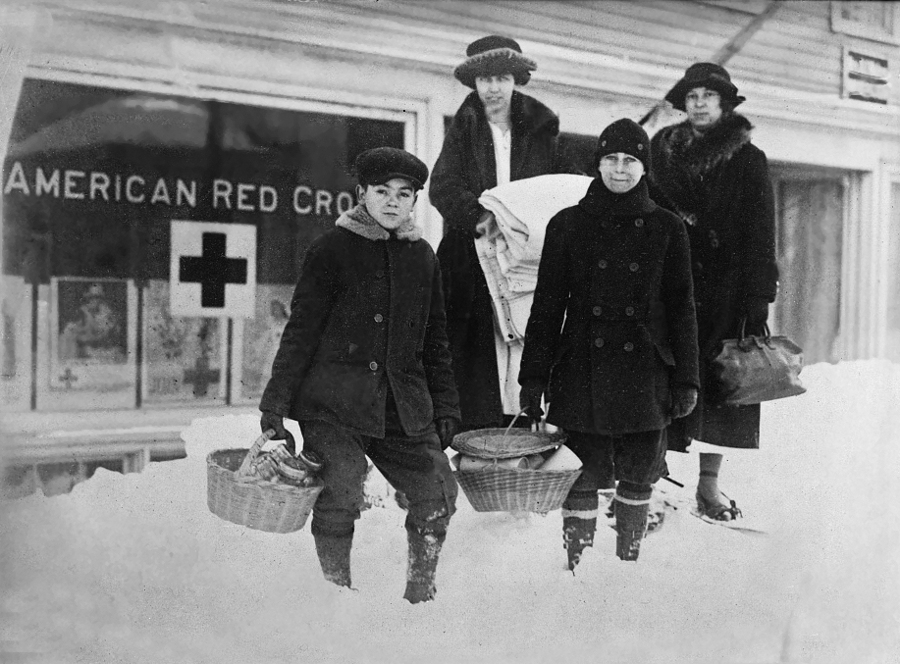 Helpers in Beverly, Mass. with blankets and other supplies for stricken people. (Date published: March 20, 1920)

In Beverly, Massachusetts, influenza broke out in February 1920 with dreadful weather conditions prevailing. Thankfully, preparations to fight an epidemic had been made in advance through concerted cooperation of the Board of Health, the Public Health Dispensary, the Health Center, and the Red Cross. When the time came, their collaborative effort ensured that food, linen, blankets, clothing, and transportation were available. 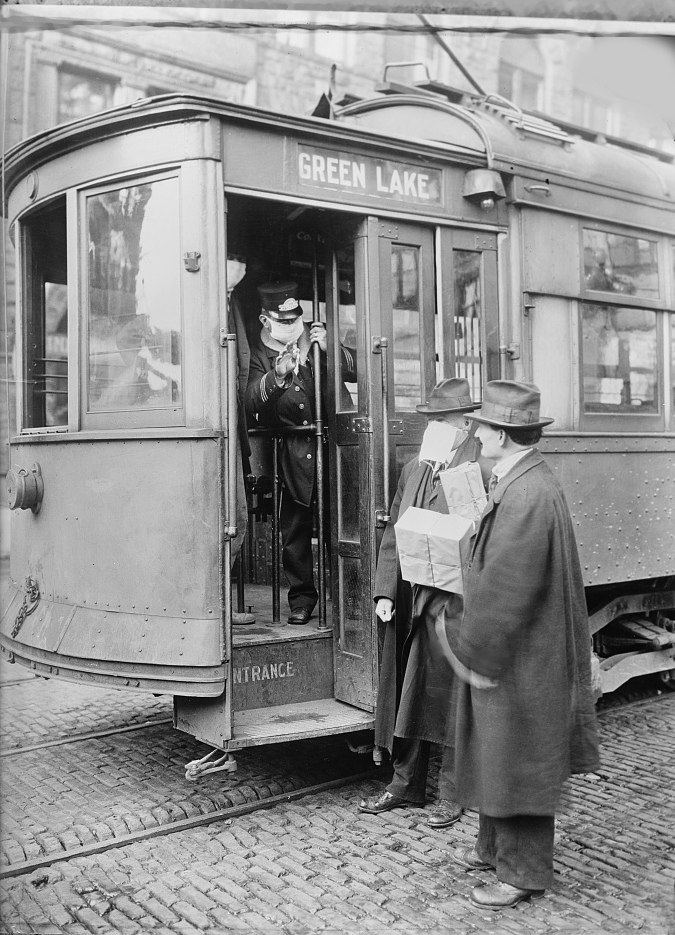 In Seattle, people were banned from riding street cars without masks. (Date: 1918 or 1919)

During the Spanish flu epidemic, the city of Seattle wouldn’t permit anyone to ride on street cars without wearing a mask. About 260,000 masks were made by the Seattle Chapter of the Red Cross in just three days by 120 workers! 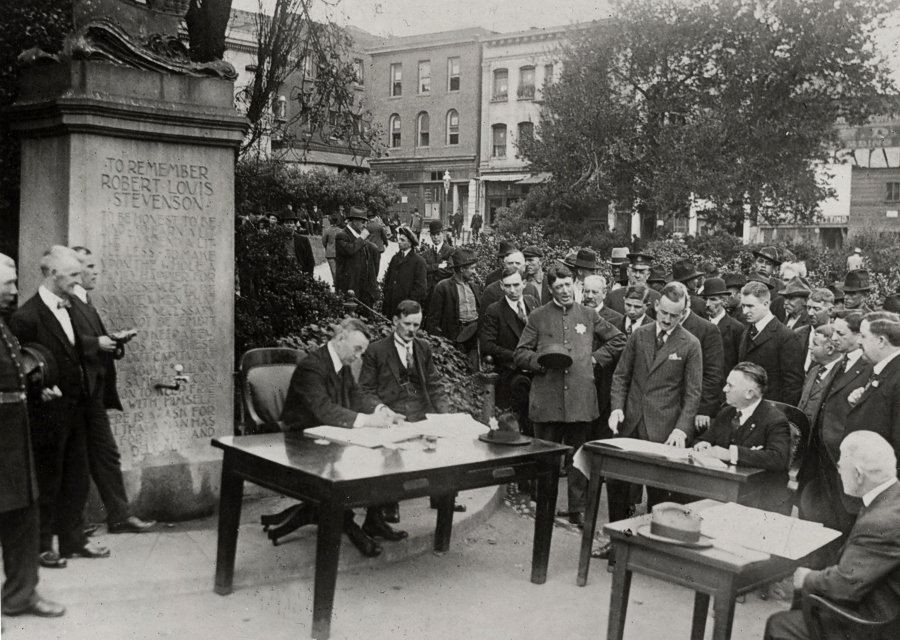 Police Court officials of San Francisco held a session to help prevent against spread of the influenza virus (Date: November 29, 1918) 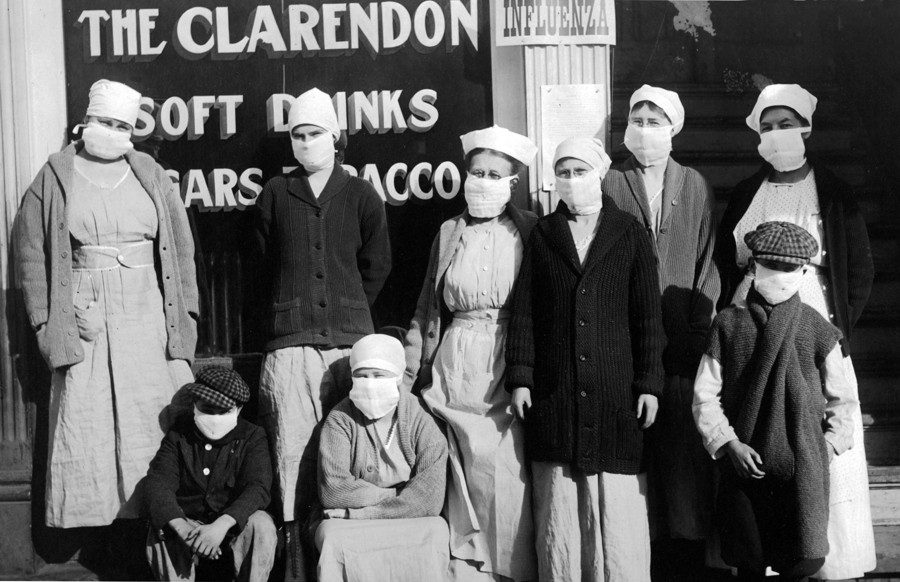 Nurses and children in Colorado wear masks to help ward off the virus (Date: 1918) 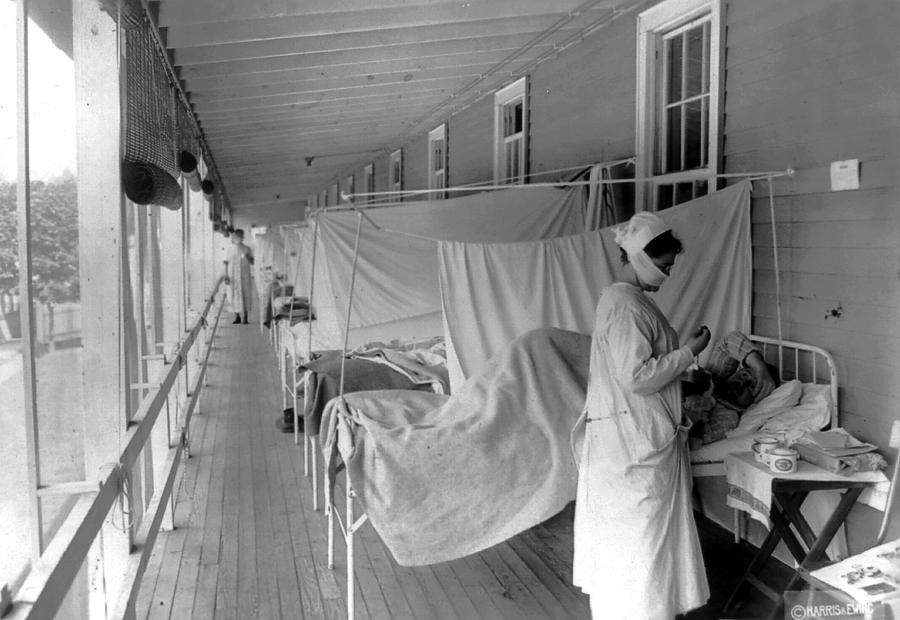 Demonstration at the Red Cross Emergency Ambulance Station in Washington, D.C. during the influenza pandemic (Date: 1918) 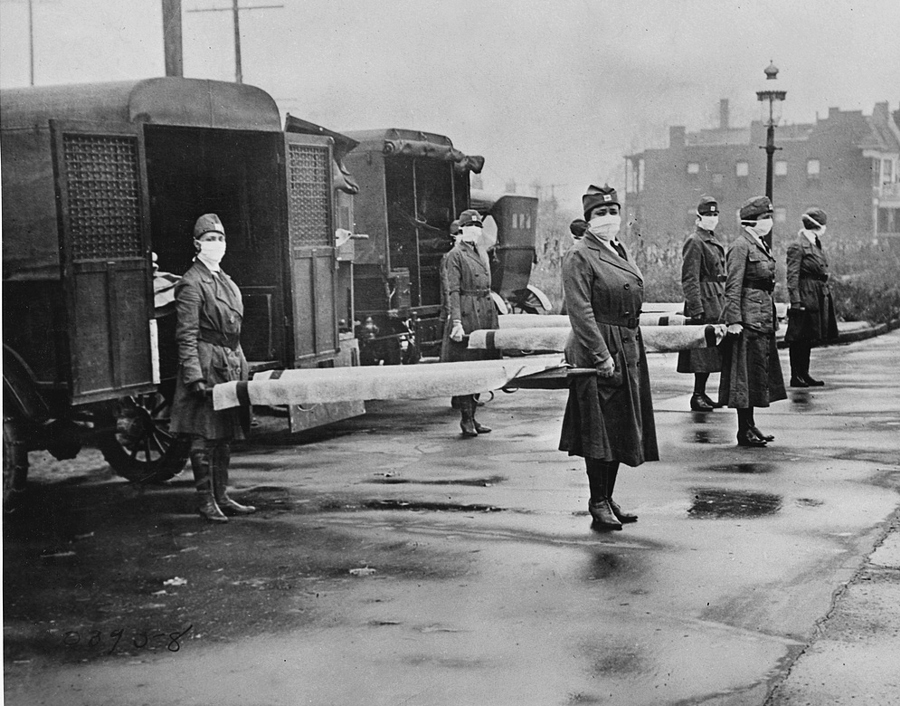 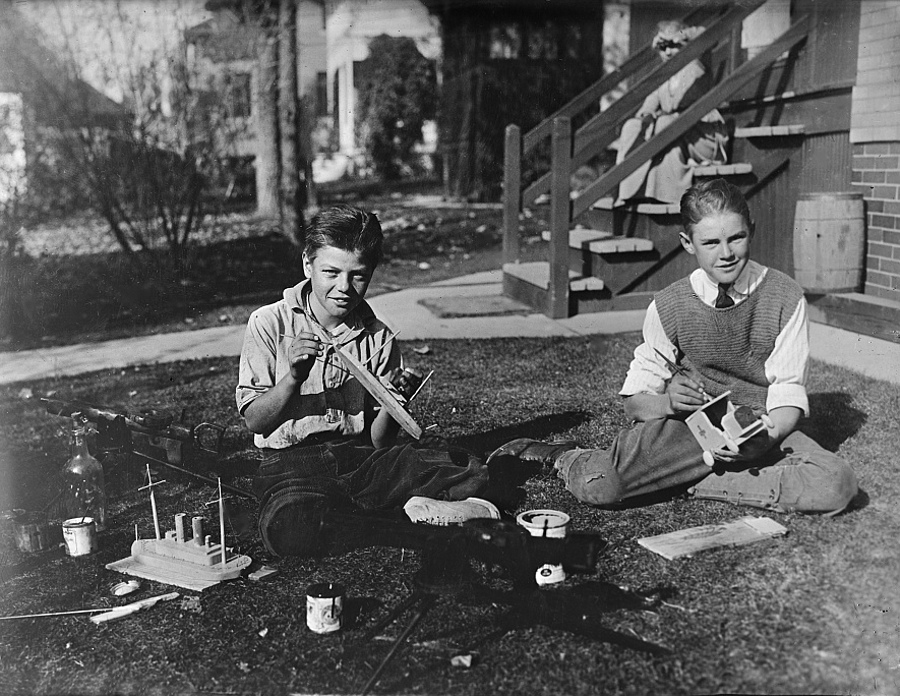 While school was closed for influenza, children in Denver, Colorado made toys for refugee children overseas. 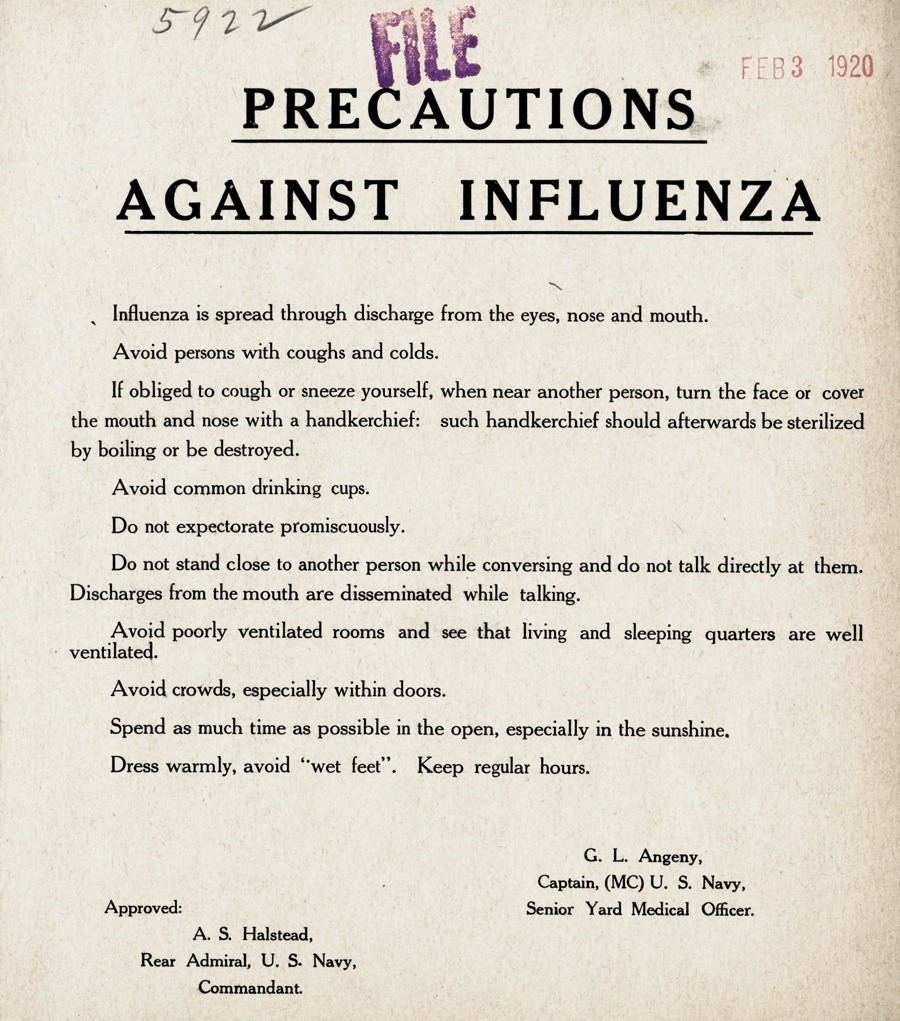 Caption: Precautionary flier from the U.S. Navy warning against contraction and spread of the influenza virus (Date: February 3, 1910)

My health club is closed until March 30 and all bars and restaurants (except drive-through and curbside delivery) and schools are closed in Illinois. I haven’t seen my 96 and 91 year-old parents because their retirement facility has been on lock down for nearly three weeks with no end in sight. They have done a remarkable job delivering meals to all the apartments, although there’s no housekeeping. This has been especially hard on my parents because my mom has been in the rehab facility in the building for more than a month and my dad can only visit her for a brief period in the hallway outside the facility.

Toilet paper has been completely depleted for five days in the grocery stores in my area with no sign of restocking. We have enough to last about 10 days – my dad said we could always resort to methods used prior to toilet paper … hey, that’s an idea for my next blog. Stay tuned and stay well!