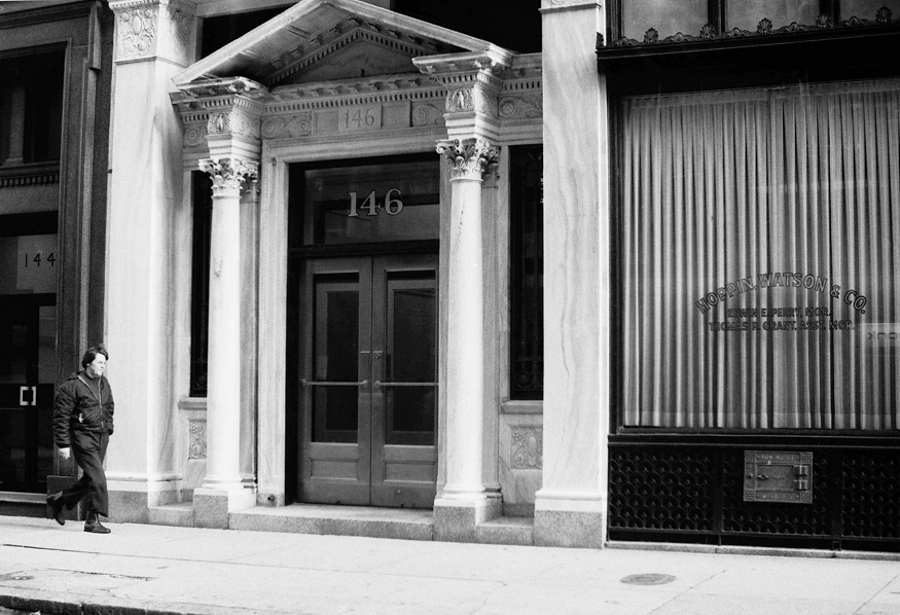 When I was an art student at the Rhode Island School of Design, I loved exploring downtown Providence and taking photographs. In celebration of the 40th anniversary of my RISD graduation on May 24, 1980, I’ll be posting a series of blogs looking back – featuring historic photos and postcards. The first blog is about Westminster Street and some of the wonderful landmark buildings that still exist. Also included are now-defunct businesses I encountered during my RISD years, as well as long-forgotten ones from the late-18th to early 20th centuries. I fondly remember walking on Westminster all the way past downtown to Olneyville to buy jewels at Wolf E. Myrow. During my RISD years, the portion of Westminster in downtown Providence was a pedestrian mall and closed off to vehicles. I loved the somewhat seedy quality of downtown Providence and would likely bemoan its gentrification if I returned.

Woolworth: Located at 185 Westminster in a five-story building from 1920, I would buy things at this five and dime now and then, but it didn’t have the charm of my favorite Chicago Woolworth store. 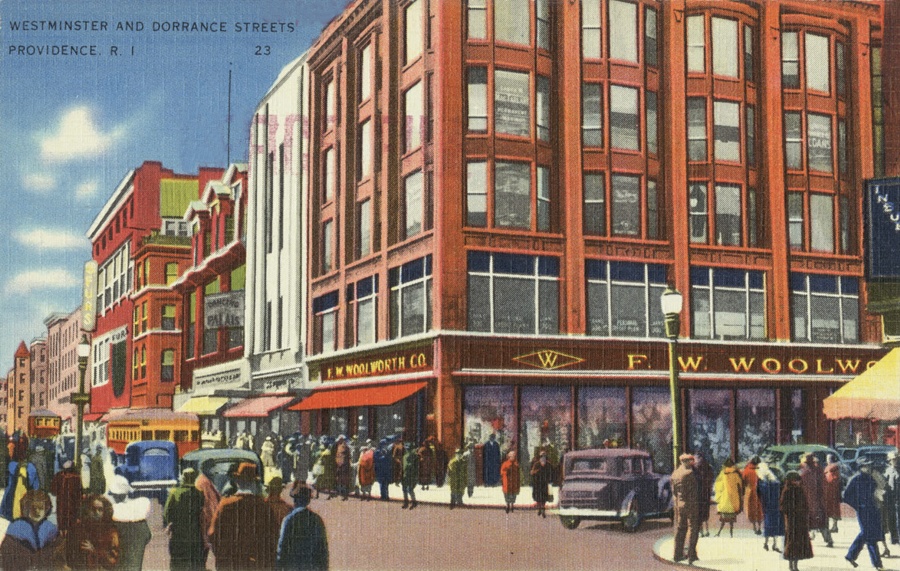 Thom McAn: I remember this retail chain on Westminster since it was near Woolworth, but I never went inside nor purchased shoes from this brand. Their retail stores closed in the late 1980s after being bought by K-Mart and subsequently Sears, who still sells this brand – that doesn’t bode well, although I think Walmart also sells them.

Lerner Shops: Located in the former Wilkinson Building (mentioned separately later) at 210–216 Westminster, I never shopped here, nor at the location on State Street in Chicago. Founded in 1918 by Samuel A. Lerner and Harold M. Lane in NYC, New York & Company purchased the company in 2004 and they’re still in business. 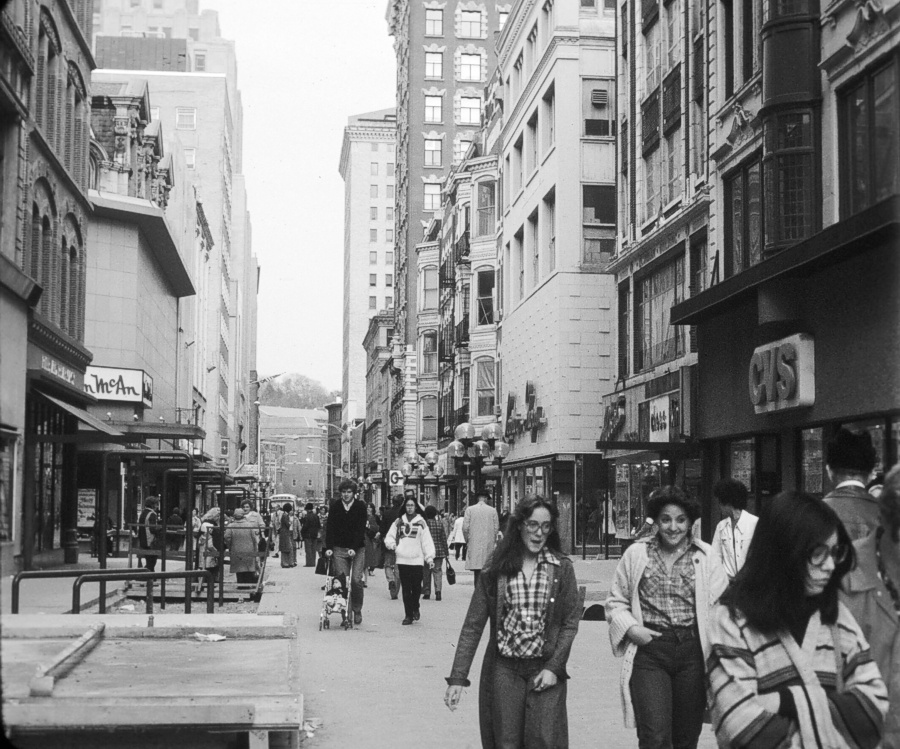 Peerless: Located at 229 Westminster on the corner of Union, the Peerless Building takes up the entire block and now houses residential lofts. Peerless was the largest and most successful regional department store – in business for more than 50 years until 1990, when it closed its doors. Prior to this, this historic building was home to the Boston Store.

Shepard: Founded in 1880 at 259 Westminster, this iconic store filed for bankruptcy in 1974. Although this was before I attended RISD, I photographed this sign on the side street. The building occupies the entire block between Westminster, Clemence, Washington, and Union Streets. The iconic clock and the Tri-Store Bridge connecting Cherry & Webb, Gladdings, and Shepard live on. 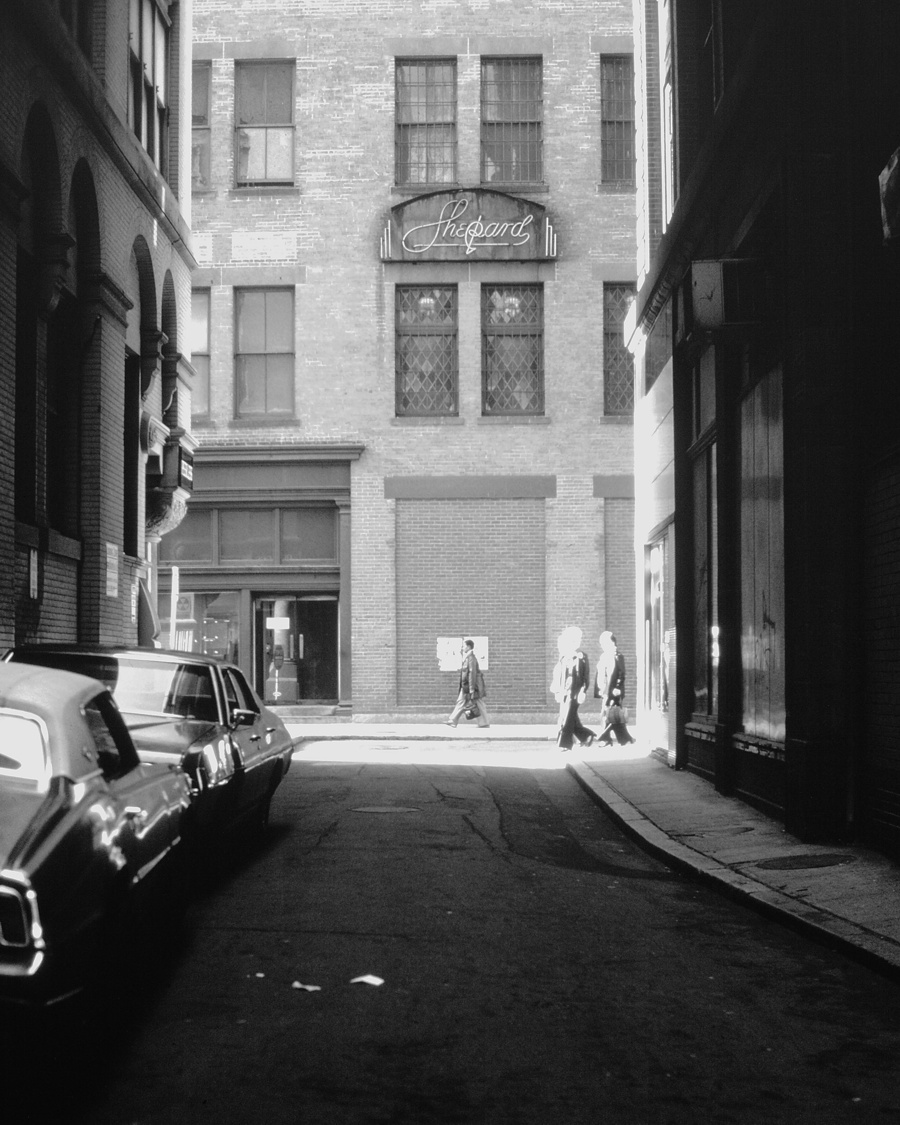 Cherry & Webb: Located at 275 Westminster, this store was established in 1888 in Massachusetts and went bankrupt in 2000. I remember buying Bass Weejun shoes that ended up being too small at a location located in The Midland Mall in Warwick. If I recall correctly, a friend whose family lived in nearby Fall River borrowed her mother’s car and drove us there – a rare thing since I only shopped outside Providence on a rare occasion.

Tilden-Thurber: By far the classiest business on the street, the home of this family jewelry store was a painted masonry building with a decorated iron-facade completed in 1895 that still stands today at 292 Westminster. The business grew from a showroom for locally-manufactured Gorham silver to a four-story department store – Providence’s answer to Tiffany’s until it closed in 1991. 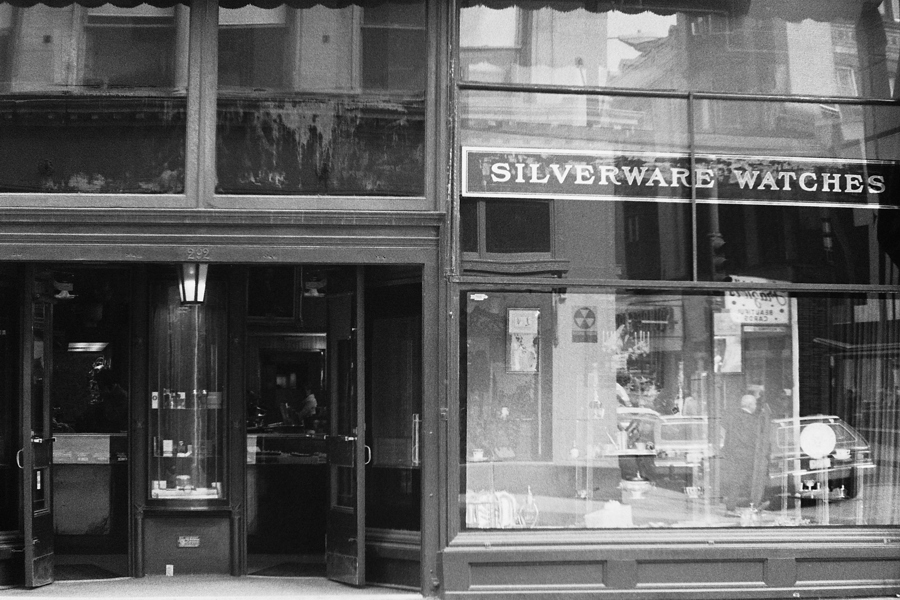 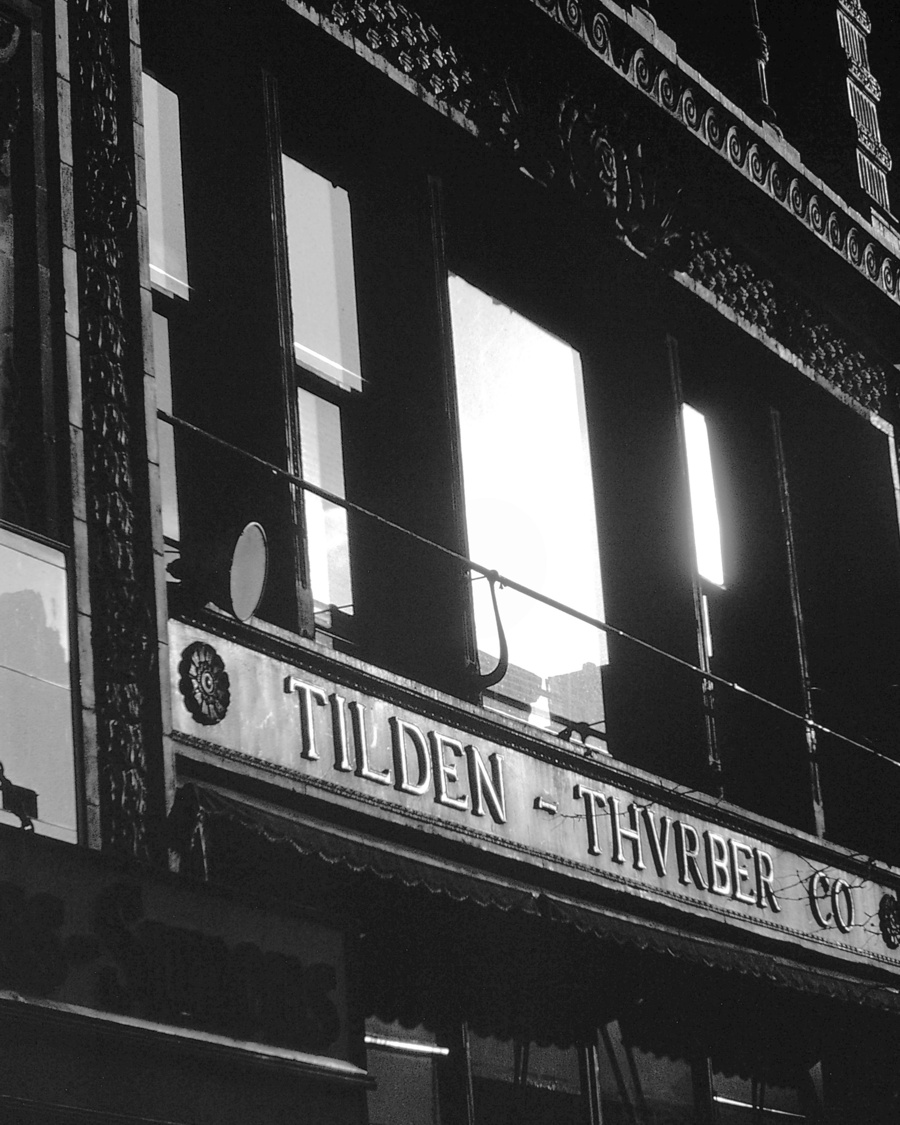 Imperial Theatre: Located at 569 ½ Westminster, at what once was the intersection of Westminster and Weybosset, this first-class dramatic venue featured the Four Cohans on opening night, likely because George M. Cohan hailed from Providence. Combining the look of a 19th Century opera house with an early-20th Century theatre, the interior featured a three-decker, with an orchestra, balcony, and gallery. The building was demolished in 1965 to create a parking lot as part of the Weybosset Hill renewal project. This project eliminated parts of Westminster and Weybosset, created a plaza in front of the Cathedral, as well as complex of buildings adjacent to and nearby it. 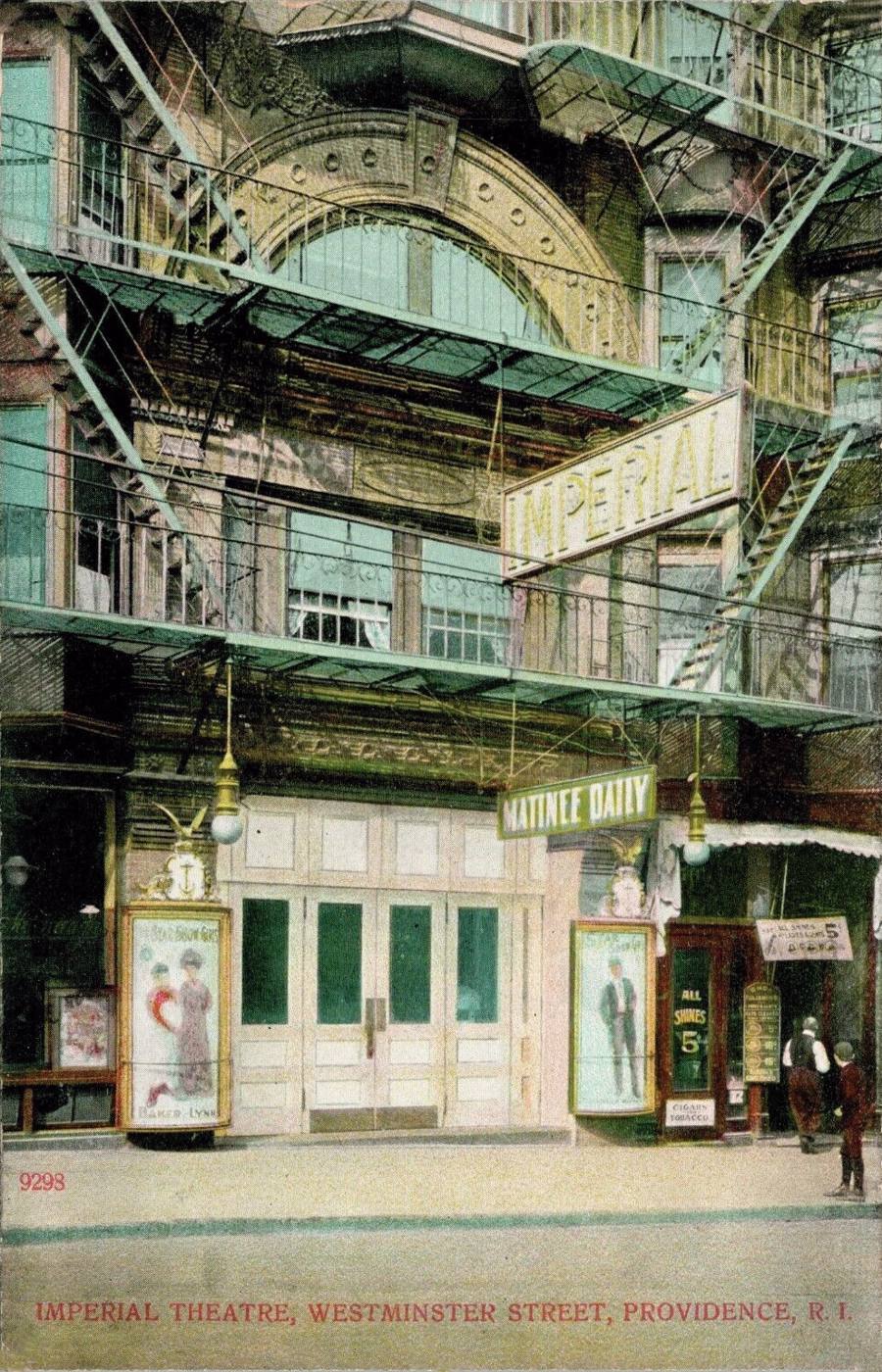 Empire Theatre: Located at 260 Westminster and rebuilt with a grand reopening on October 24, 1898, this stunning theater boasted a seating capacity of 1,801. The ornate building was home to Keith’s New Theatre, Victory Theatre, RKO Victory Theatre, and from 1936 to its demise in 1948, the Empire Theatre. It was right across the street from Shepard. 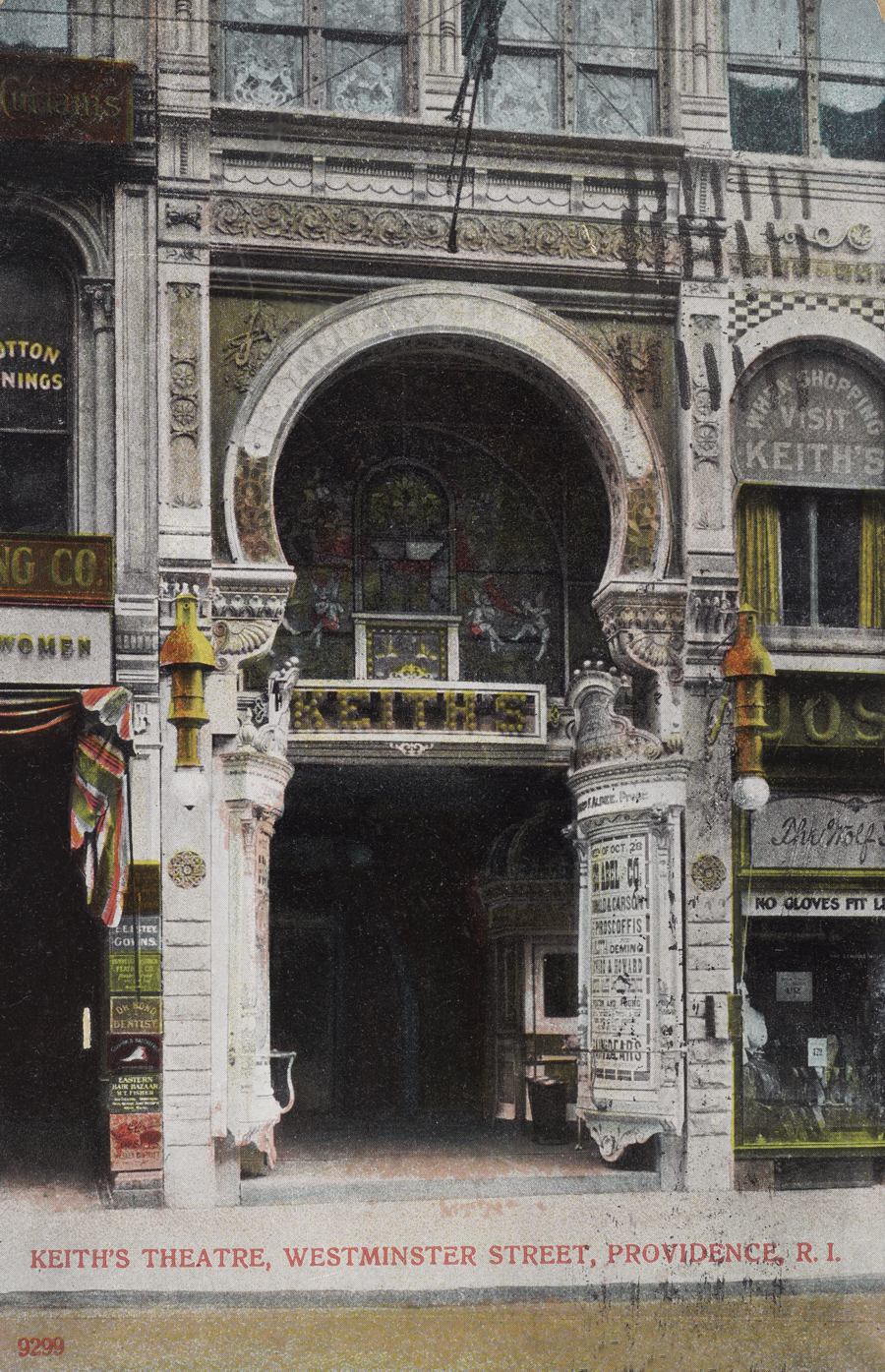 Ming Garden: Located at 141–143 Westminster from 1941 to 1986, this classic Chinese restaurant had entrances on Westminster, as well as Kennedy Plaza. It was adjacent to People’s Bank, which was bought by Hartford National Bank and then Boston’s Shawmut in 1987. I ate here at least once during my RISD years with my friend and roommate Mimi Wu. 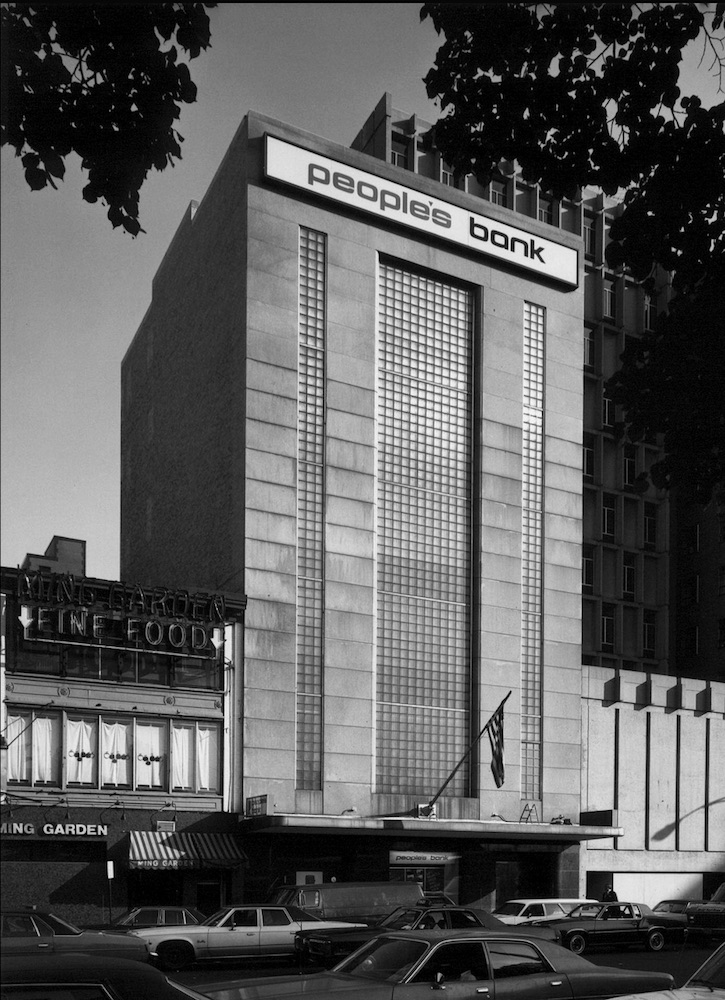 Rhode Island Hospital Trust: Located at 15 Westminster, this 11-story steel-frame building, faced mostly in limestone, was built in 1917–1919. RISD purchased this property in 2005 for $47 million and it now houses the Fleet Library, a café, and some dorm space.

I had a checking account at the Hospital Trust Bank and would always walk past here to the boring adjacent One Financial Center Plaza to buy a single pack of Little Debbie Nutty Bars for 25 cents at the convenience store located in the lobby.

Turks Head: Built at the intersection of Westminster and Weybosset in 1913, this iconic building got its name from the ship’s figurehead resembling a Turk. The sculptural head was displayed in the balustrade over the piazza of the 1750 Jacob Whitman house that once occupied this site. While the sculpture was destroyed in 1815, this building features the effigy on the decorative horizontal band above the second story. 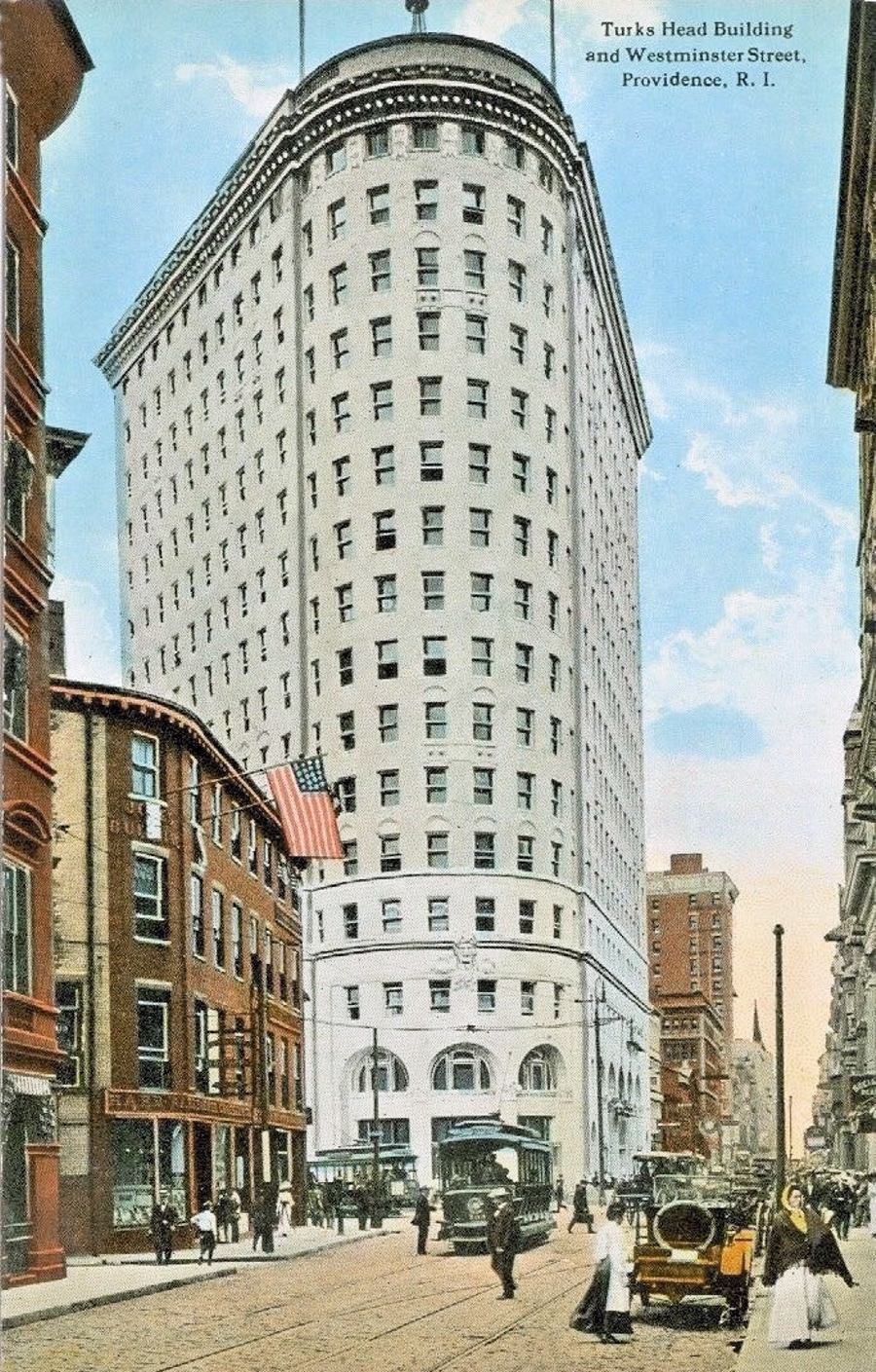 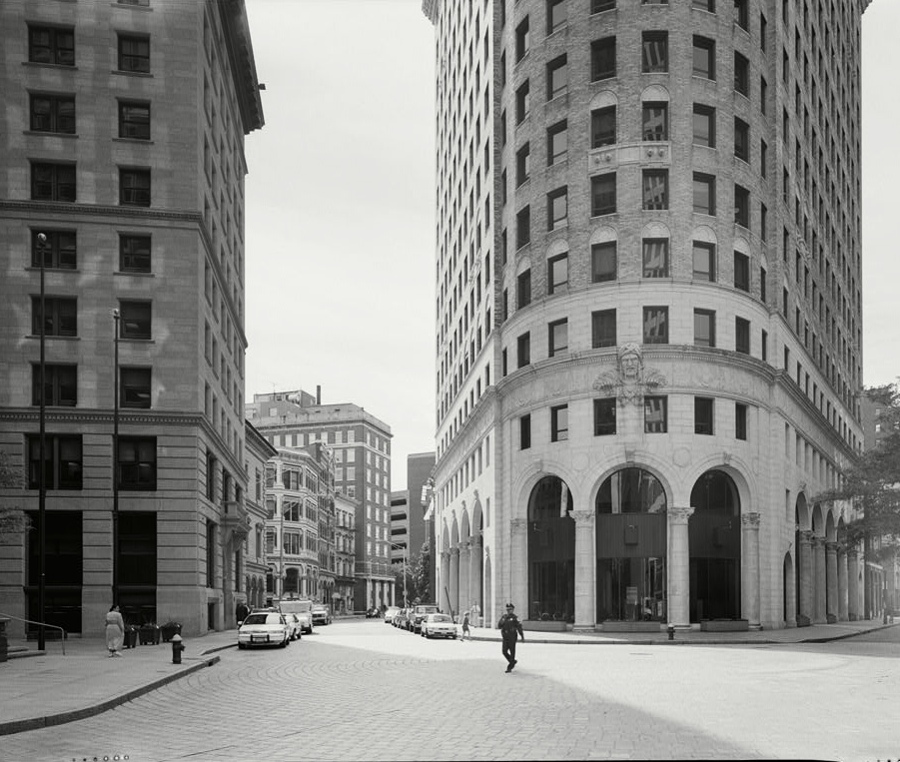 Industrial Trust: Located at 111 Westminster, this superb, 26-story art deco building was completed in 1928 and is considered the city’s most famous landmark. It features stepped, pyramidal massing with major setbacks above the 15th, 22nd, and 26th stories and a four-story square lantern on top. It was dubbed the Superman Building due to its resemblance to the Daily Planet building from Superman comics. Sadly, the building has stood vacant and was named one of the 11 most endangered buildings by the National Trust for Historic Preservation in 2019. 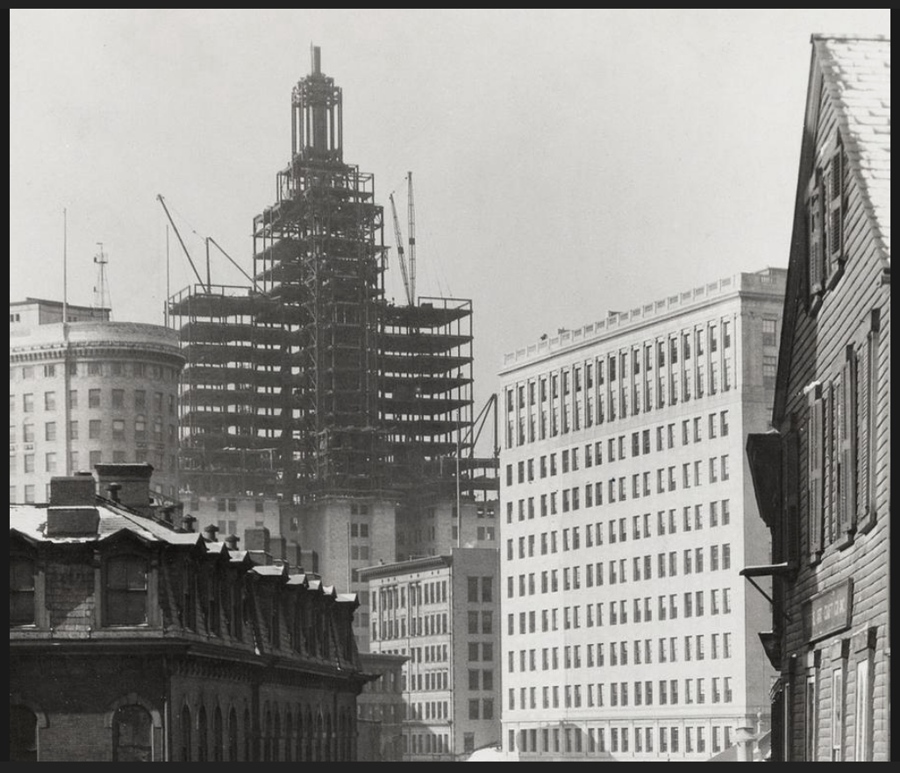 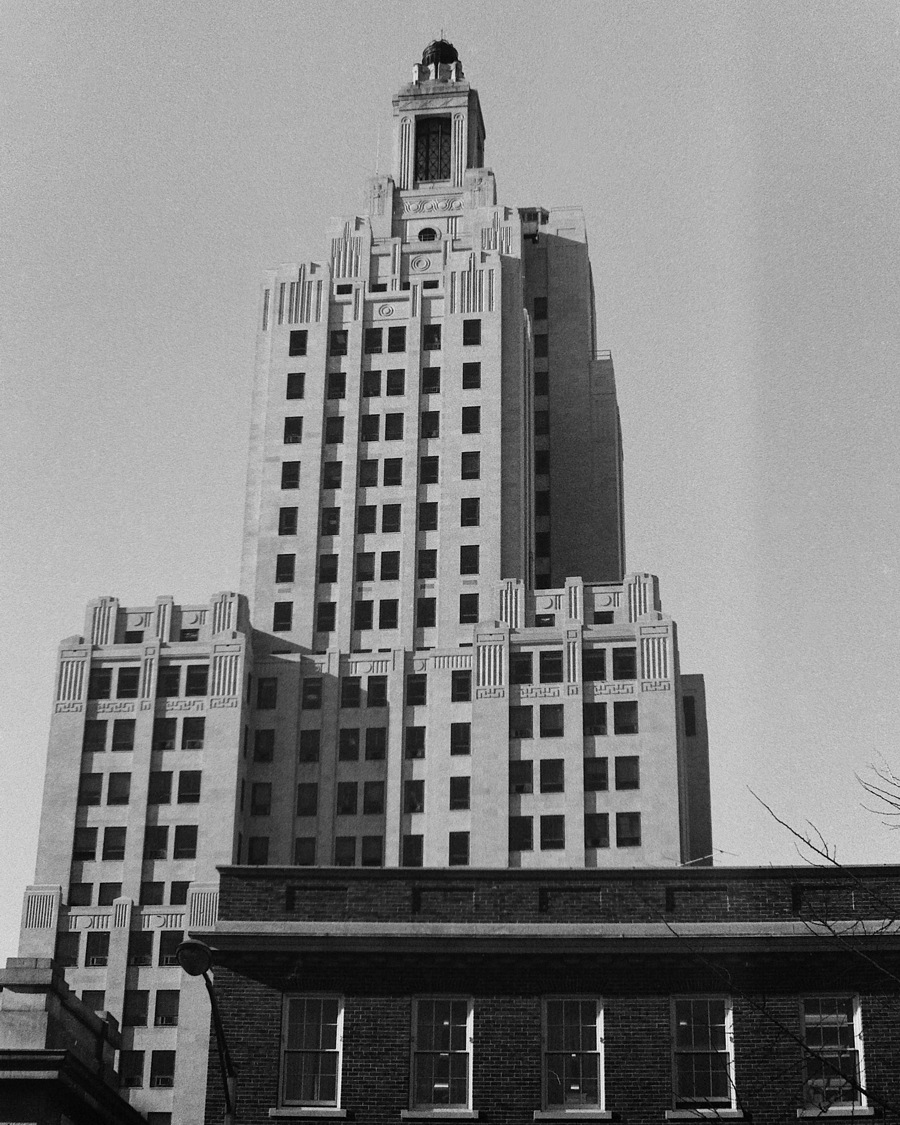 Kresge: Designed by Kresge in-house architect James E. Sexton, this art deco classic at 191 Westminster was completed in 1920 and currently sits empty, while officials ponder the plans of the same Washington D.C.-based developer mentioned below. 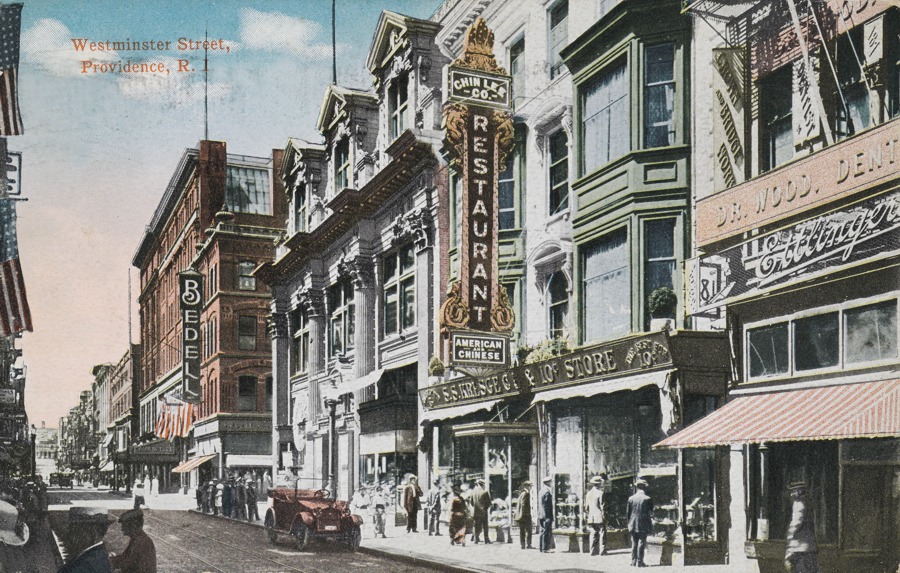 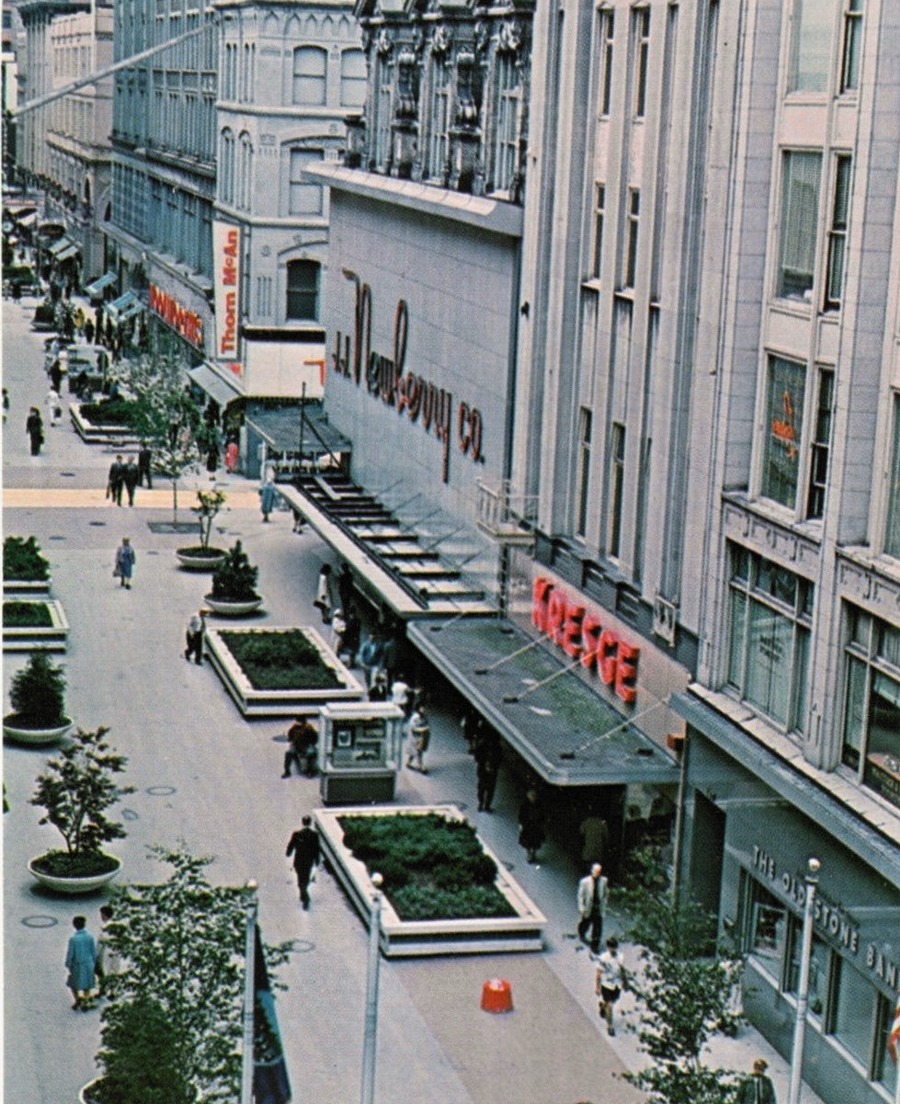 Old Providence Journal: This stunning, 1906 Beaux Arts building at 203–209 Westminster once housed the Providence Journal, but they rapidly outgrew the space and moved to a new building in 1934. The American Renaissance, 3½-story building featured a colossal Corinthian column, heavy projecting cornice, and elaborate dormers with console pediments. Sadly, metal sheathing was added as part of the Downtown 1970 Master Plan. This clumsy attempt at modernization obscured much of the building’s gorgeous exterior. Thankfully, a major project in 1983 restored it to its former glory, however, the building has been subject to recent scrutiny. A Washington D.C.-based developer wants to transform it and the adjacent building into the hip, microloft-style Hive Hotel.

Wilkinson: Located at 210–216 Westminster, this 1887–1900 five-story building was modernized to house Lerner Shops. It stood empty for 20 years prior to its conversion to 12 residential units and 3,200 square feet of commercial space at the end of 2004. The decorative stone tiles were removed and the original facade was restored and improved.

Lapham: Located at 284–290 Westminster, this nine-story building completed in 1904 was framed by decorative pilasters and decorative frieze shared with the Tilden-Thurber Building. Cornish Associates is currently constructing, expanding, and renovating three historic properties including this building. 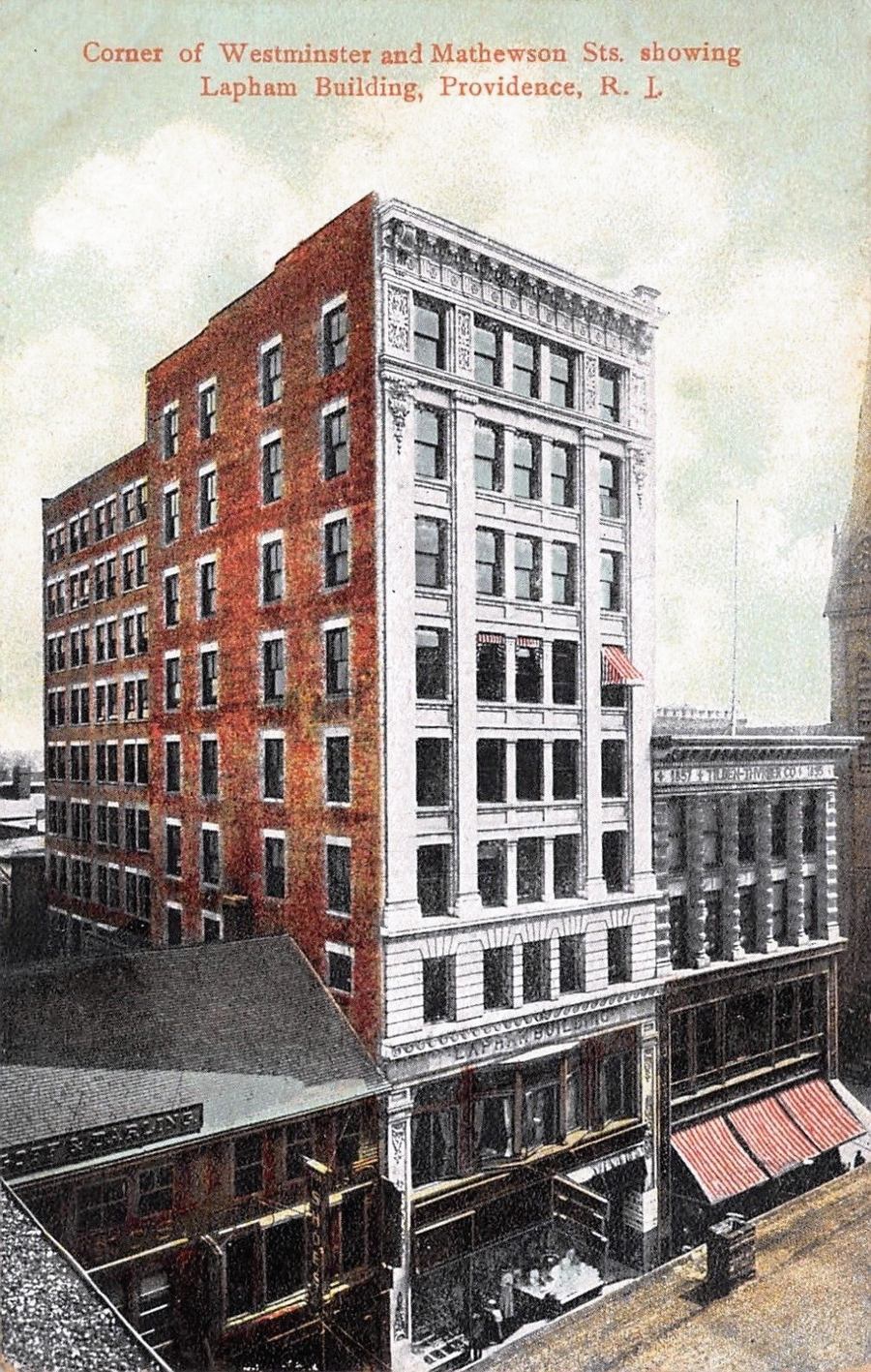 I recently bought two trade cards to use in collages, but I must say it wasn’t just the imagery that caught my eye. I was intrigued by the location of this business at 168 Westminster. I wanted to learn more and found out a good deal about Ira N. Goff and John O. Darling during my research. I also found the below photo from 1906 in which you can clearly see Goff & Darling Pianos on the right side. 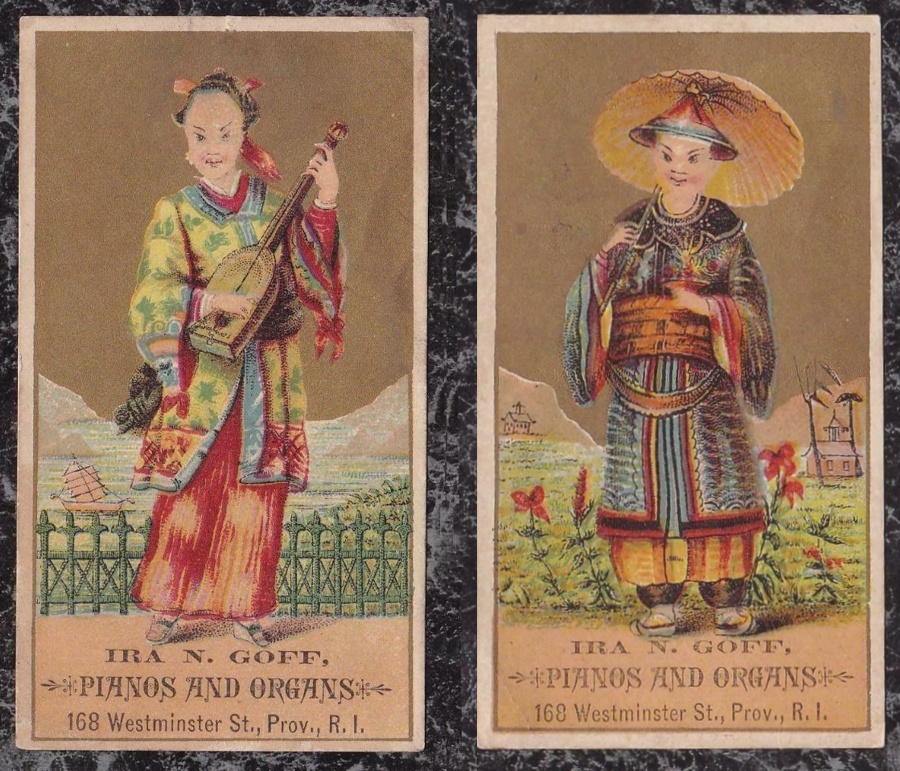 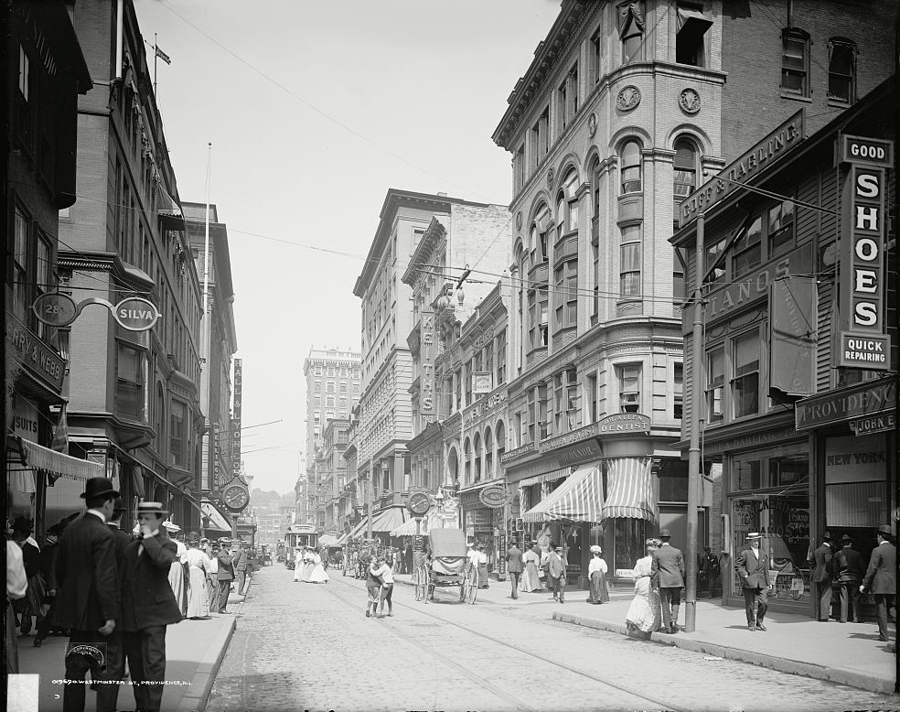 Ira N. Goff was born in Providence on August 20, 1849 into one of the city’s oldest and most honored families. Through his brother-in-law, Goff started work in the piano business at Barney and Son. In 1876, he set up his own business on Westminster opposite the Boston Store. He remained at this location for more than 10 years. John O. Darling was made a partner in November 1885, and soon thereafter, the firm moved to 268 Westminster, across the street from Cherry & Webb, as you can see in the photo. Goff married Mary Attmore Whaley in Newport on November 19, 1874 and they had three children. He died on February 6, 1917.

John O. Darling was born in Providence on December 24, 1852. He was educated in public schools, leaving high school during his second year due to poor health. After his health improved, Darling worked at the Providence Mutual Insurance Company for three years and then worked as a bookkeeper for a wholesale grocery store for two years. His next position was with Eugene F. Phillips (American Electrical Works), where he stayed for 10 years. Darling was one of the pioneers in this line of work, selling wires for the earliest switchboards in the telephone exchanges and electric light stations.

On July 6, 1880, he married Mary Rousmaniere Bosworth. By 1919, he was remarried, as indicated in this entry in Music Trades, Volume 57; May 31, 1919: “John O. Darling, member of the old firm of Goff and Darling Piano in Providence, R.I. which went out of business more than a year ago, following the death of Mr. Goff and the settlement of his estate, was recently married to Miss Nina Leviton of Providence.” 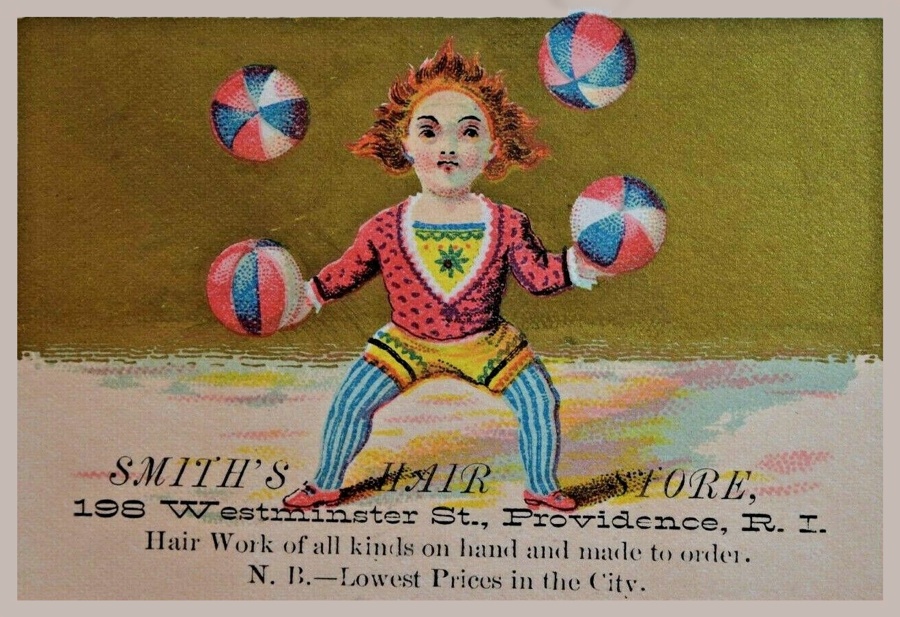 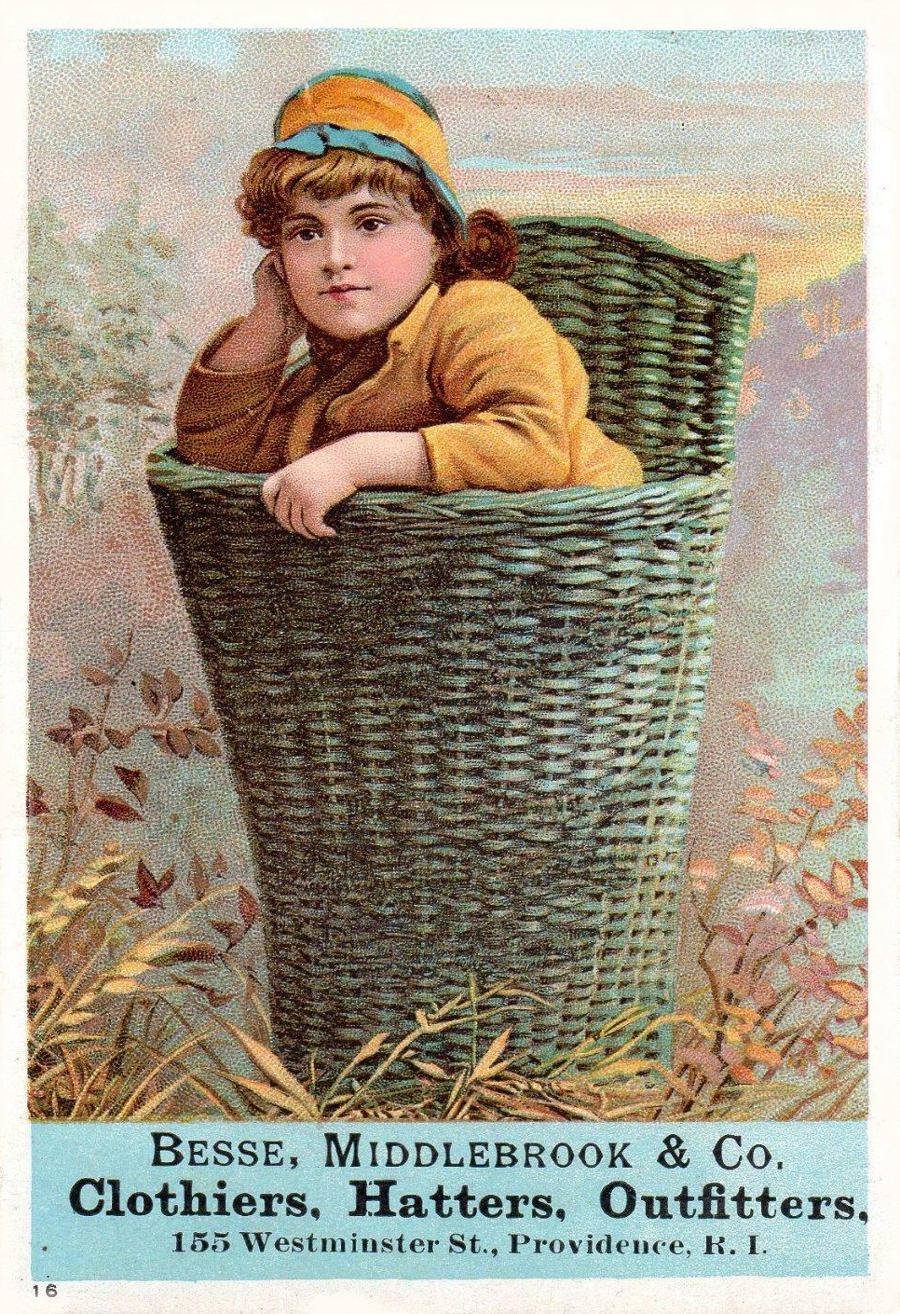 Wondering why I didn’t mention the 1828 Arcade? Stay tuned for my next blog featuring more of my vintage Providence photos and other downtown streets including Weybosset.