Once Upon a Time on Washington Street – One Fantastic Block 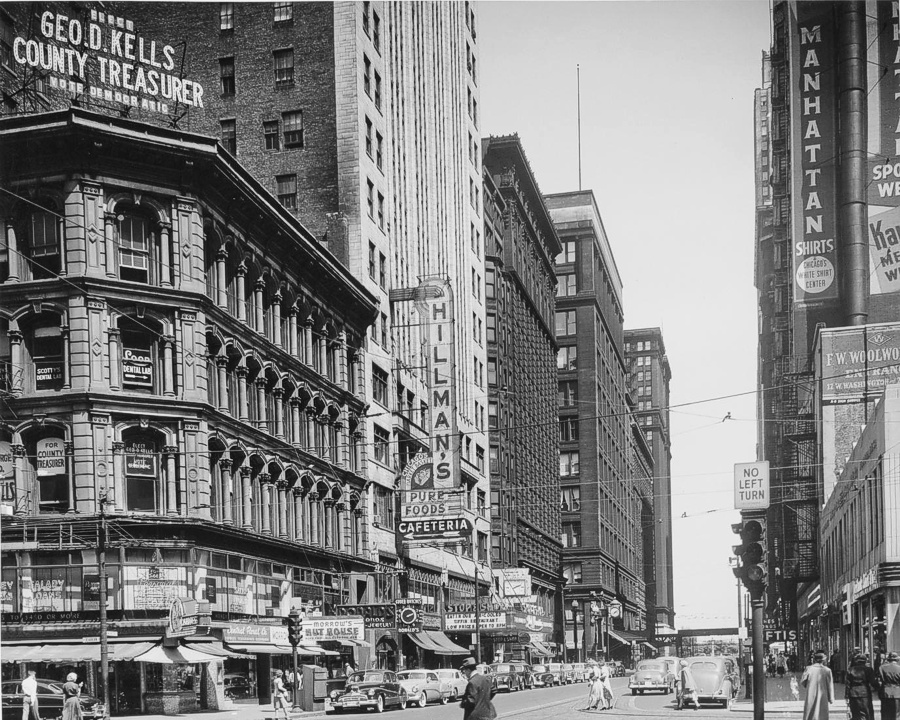 The east-west presidential streets we know today already existed on an 1833 map of the Chicago Loop – Washington, Madison, Monroe, Adams, and Jackson. During the 20th century, a number of intriguing businesses existed on Washington Street. The most famous non-defunct landmark may be the Marshall Field clock at the corner of State and Washington (installed in 1897) and the one on the corner of Randolph and State (installed in 1902). While many people, including yours truly, mourn the demise of Marshall Field, at least we still have the beautiful, massive iconic clocks. This blog is specifically about Washington Street from Dearborn to State Street and the businesses lost to history that once graced this block. It all started with the above photo and blossomed … as the saying goes, one thing leads to another. Unfortunately, some of the photos I included don’t have dates – the majority of the street shots are from the 1940s to 1950s. We’ll start this tour at the northeast corner of Washington and Dearborn Streets and the sign atop the landmark McCarthy Building and travel east, then cross the street and head back to Dearborn.

Democrat George D. Kells served as an alderman of the 28th Ward from 1931 to 1951 and also made an unsuccessful run for County Treasurer in the November 7, 1950 election. This is the same election in which Richard J. Daley became the Cook County Clerk, a position he held until he became mayor in 1955.

Kells was born in 1893, died in 1959, and is buried in Hillside at Mount Carmel Cemetery. According to the book Organized Crime in Chicago: Beyond the Mafia, the 28th Ward was the headquarters of Pat Nash, who was Kells’ mentor. The book states that the underworld forced Kells to retire in 1951 and he left Chicago due to threats on his life. Kells was replaced by Robert “Happy” Petrone, a close pal of crime leader Tony Accardo. The two-acre Kells Park at Chicago and Kedzie Avenues in the 28th Ward is named after him.

The McCarthy building was designed by John M. Van Osdel, an architect born in 1811 who moved to Chicago after meeting William B. Ogden, who would become the first mayor of Chicago. Van Osdel witnessed the Great Chicago Fire and was determined to help rebuild it. This building was constructed a year after the fire in 1872 – sadly, it was demolished in 1989 to make way for Chicago’s Block 37. In order to accomplish this, the Chicago City Council revoked the landmark status of the privately-owned building in 1987, which caused much controversy. In typical Chicago fashion, the Block 37 retail and office complex was long delayed and didn’t open until 2009.

Although it’s difficult to read the sign, on the ground floor corner of the McCarthy Building was one of several locations of Dutch Mill Candies. In the mid-1940s, they operated nearly 50 Chicago-area shops that sold candy, ice cream, and luncheon menu items. The company specialized in Dutch-processed chocolate which apparently used an alkalizing agent to give it a richer and creamier taste. Dutch Mill filed their federal trademark on August 9, 1946, however, I don’t know when they went out of business.

The origins of this shop go back to 1866 and I readily found patents on the name from 1934 and 1936. A chain with more than 300 stores in 39 states, the location on Washington Street was one of several in Chicago. In the 1980s, the Morrow family sold the business and after the chain passed through a couple of conglomerates, the franchise pretty much died. By 2019, two stores remained – one in Florida owned by a franchise and another one in New Jersey owned by a relative. There was a Morrow’s Nut House in downtown Portland in the 1950s and one at Lloyd’s Center shortly after the mall was completed in 1960. The great, great granddaughter of the founder revived the line in Portland, Oregon.

Located on Washington Street, Hillman’s Cafeteria and Hillman’s Pure Foods were next to Stop & Shop and operated by the same owners. Hillman’s Bakery was a 70,000 square foot food production facility at 3853 W 43rd Street. The vast facility included a candy kitchen, nut roasting operation, prepared foods kitchen, and a bakery that produced cakes, donuts, and other pastries for the grocery stores. In addition to the Washington Street location, Hillman’s operated 13 other Chicagoland locations in the early 1960s. The stores were known for their brightly lit and colorful interiors. The Sears Roebuck at 63rd and Halsted in Englewood featured a Hillman’s store in the basement. Sears closed this location in 1976 and the building was demolished.

Daniel A. Schultz and his coworker Claude were sign painters and silkscreen artists that created all the signs for Stop & Shop and Hillman’s Pure Foods stores throughout Chicagoland. According to his daughter, Schulz left Hillman’s in 1974 after a series of heart attacks, while Claude stayed on. Schulz was 83 when he died in Marcellus, Michigan in April 2008. 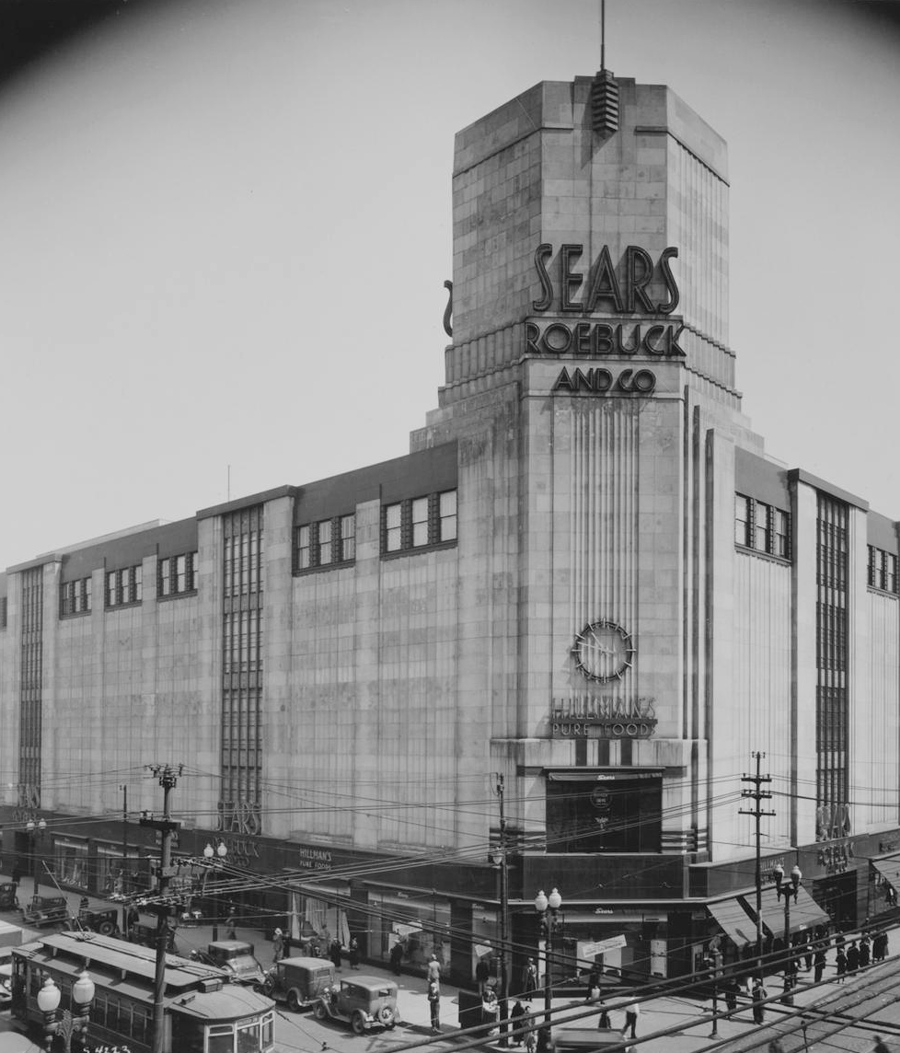 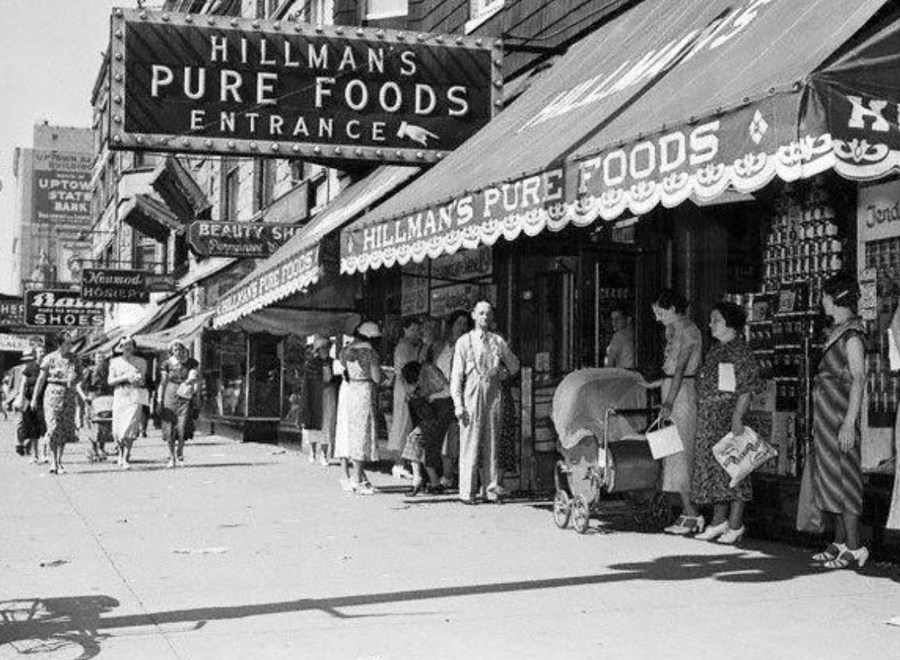 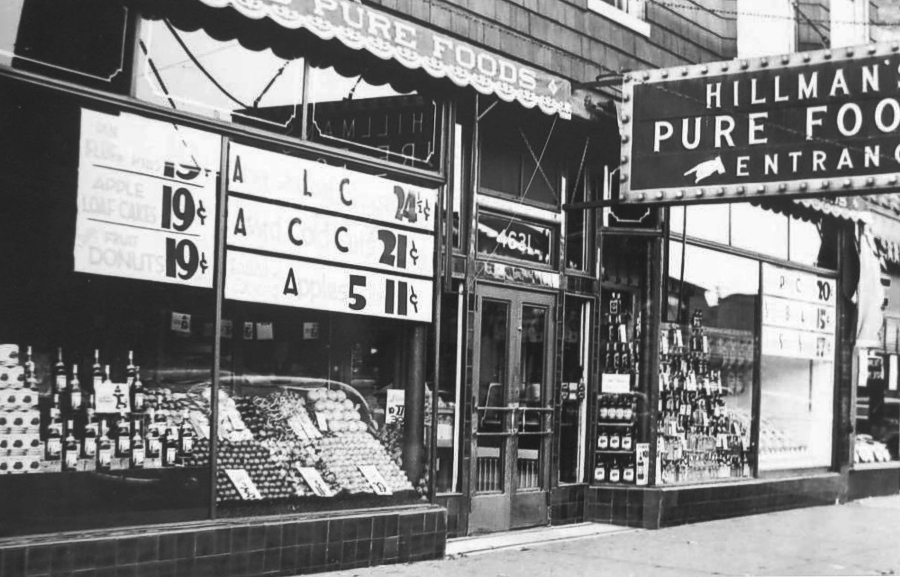 Stop & Shop was located at 16 W. Washington and went out of business in 1980. Aaron Younker, whose family ran a successful department store in Iowa founded Stop & Shop after he moved to Chicago. Later, Stop & Shop and Hillman’s were owned and run by the Stern family of Chicago, which also had a carriage trade catering operation called Gaper’s Caterers. The largest social-catering service in the Midwest and perhaps the country, Gapers produced many of the specialty items found at Stop & Shop, such as salads, ice creams, and bakery products. 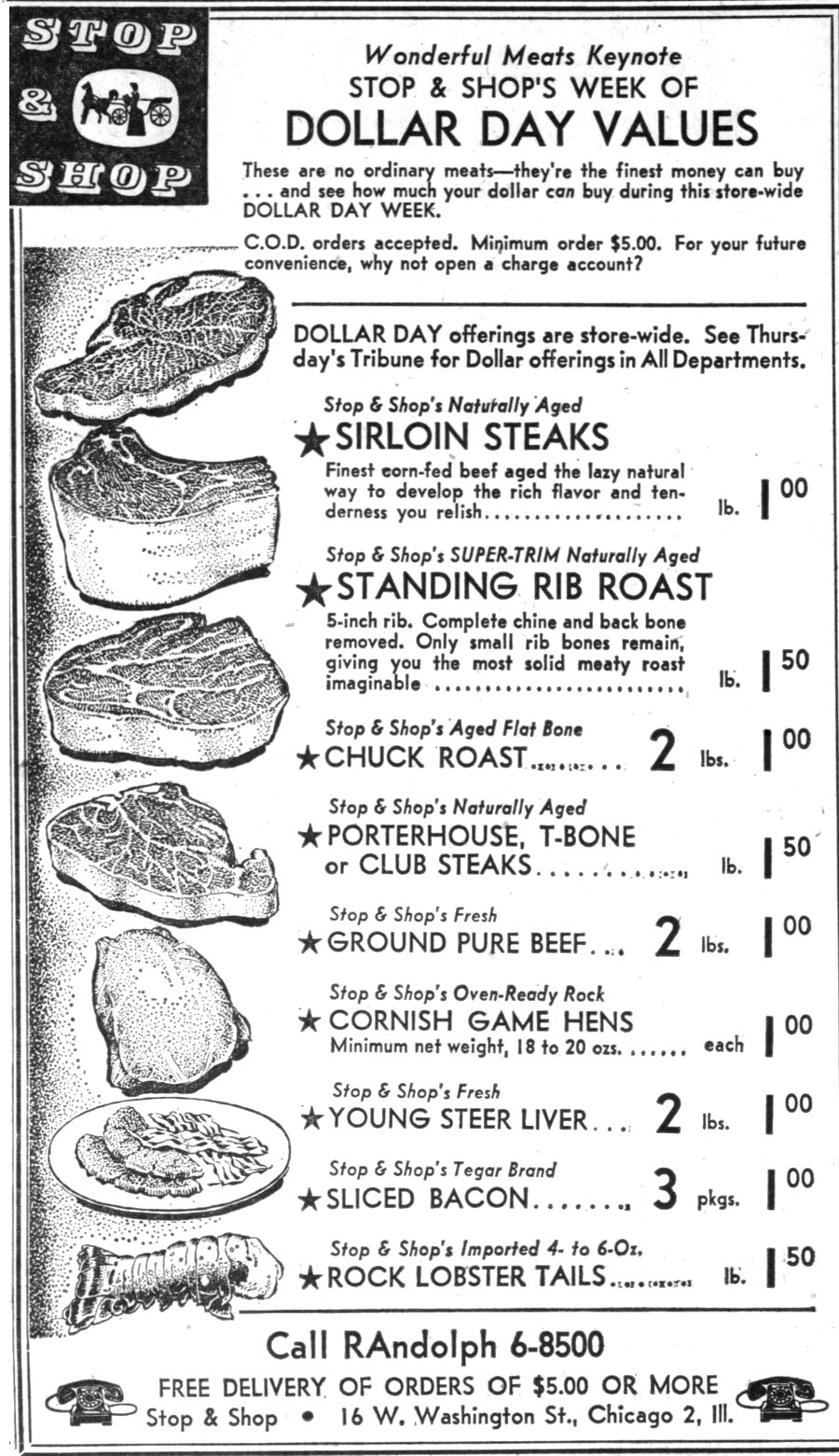 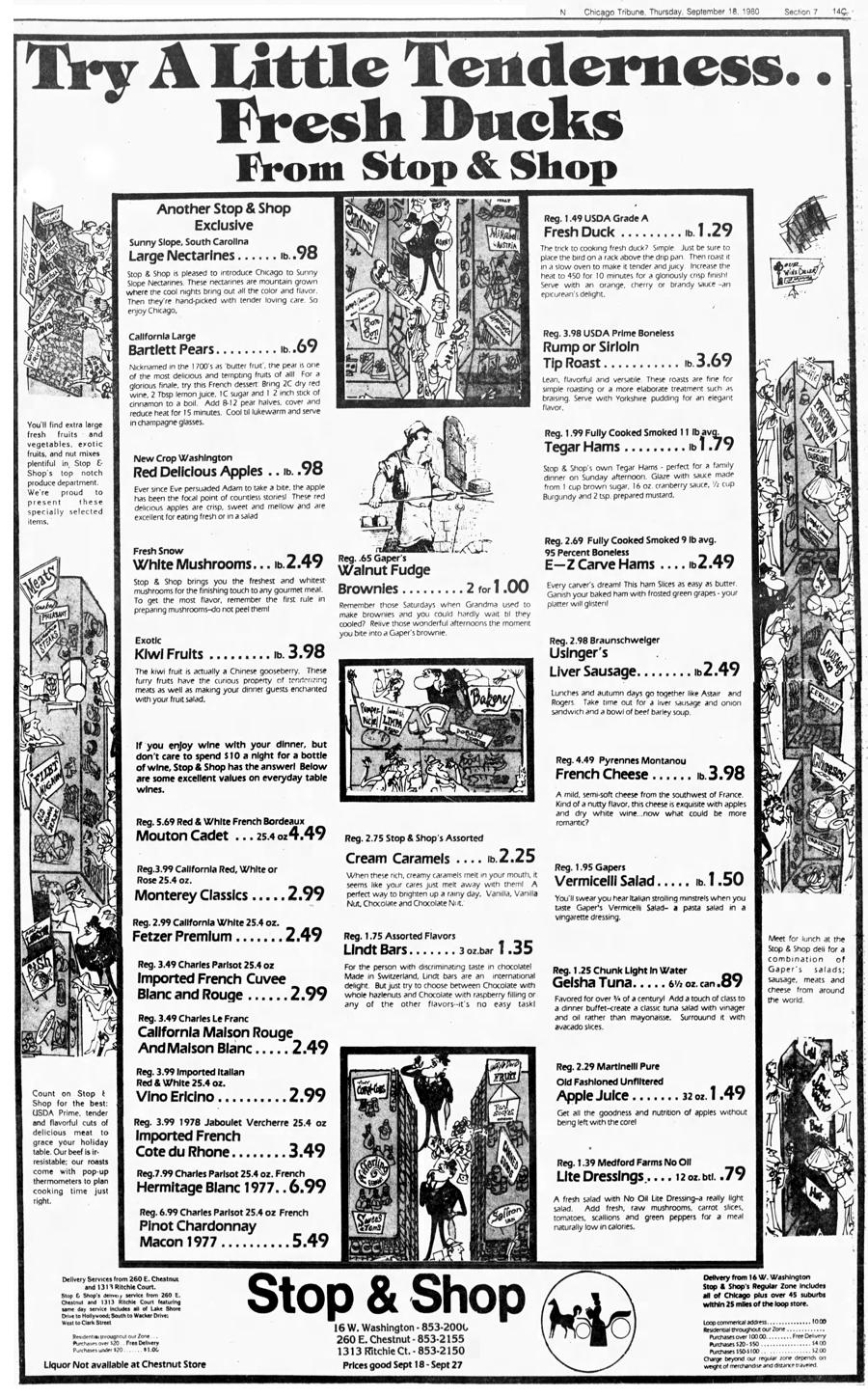 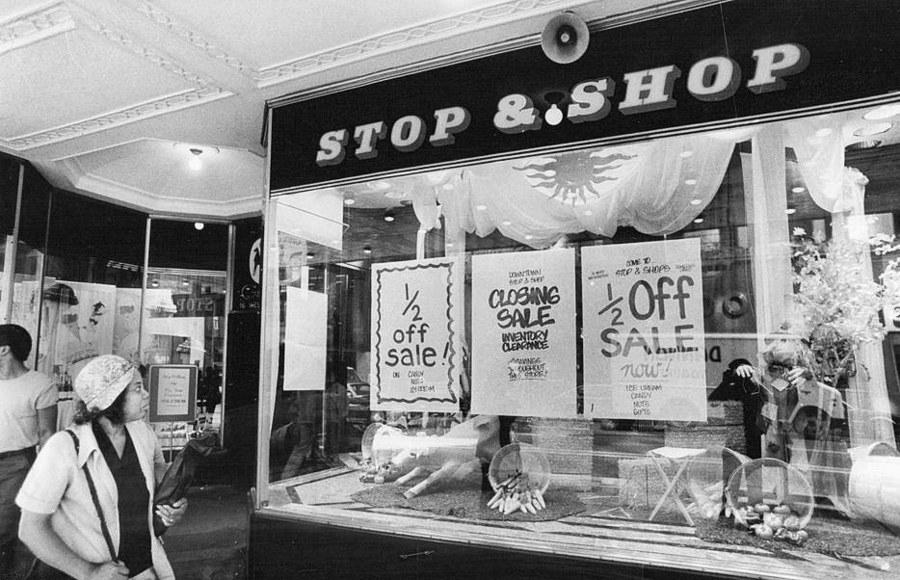 In the first photo in this blog, you can’t see many businesses on the south side of Washington, therefore let’s head back to the southeast corner.

I’m familiar with this brand, but wasn’t aware they had self-standing store. The Manhattan Shirt Company was founded by Lewis Levi in 1857. Under the direction of his son Abram Leeds, it became one of the largest shirt producers in the U.S. Manhattan Industries included the brands Henry Grethel, The Vera Companies, John Henry, Perry Ellis, Lady Manhattan, and Frost Bros. The company owned garment factories, including a huge factory complex in Paterson, New Jersey that produced 12,000 – 15,000 shirts a year in 1892. The company incorporated in the state of New York in 1912, although they operated the Paterson plant through the 1950s. Salant Corporation acquired the company in 1986 and Perry Ellis merged with Salant in 2003.

A New York Times article dated April 22, 1964 mentioned that the company was doing quite well. “Record sales in the men’s and women’s divisions should raise first‐quarter volume of the Manhattan Shirt Company about 8% over the $11,039,026 for the 1963 quarter.”

East of the Manhattan Shirt Company is a partial sign that reads OFTIS –  this could be Loftis Jewelers, but I’m uncertain. To the immediate west of Manhattan is the F.W. Woolworth sign advertising the side entrance at 17 W. Washington Street. 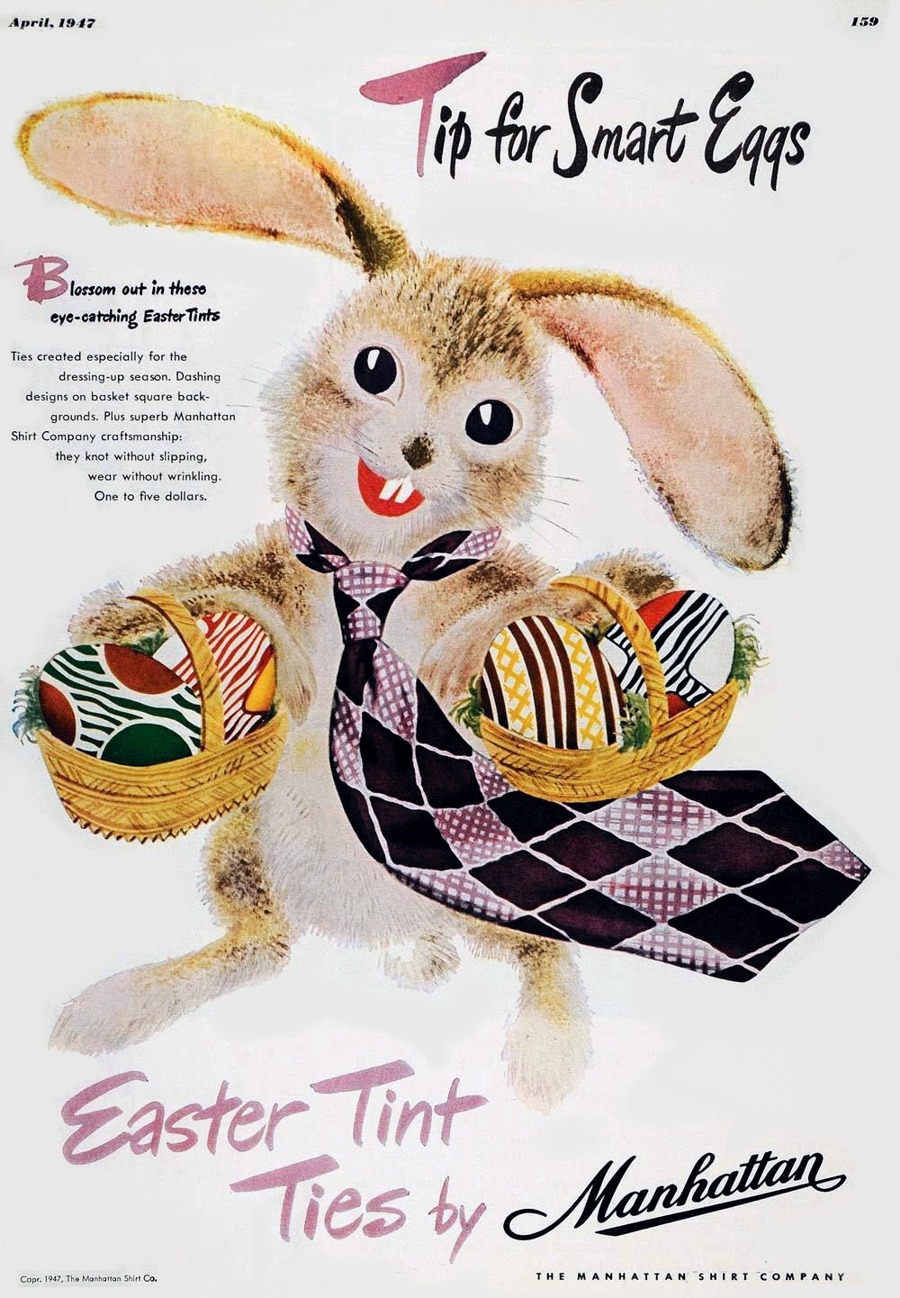 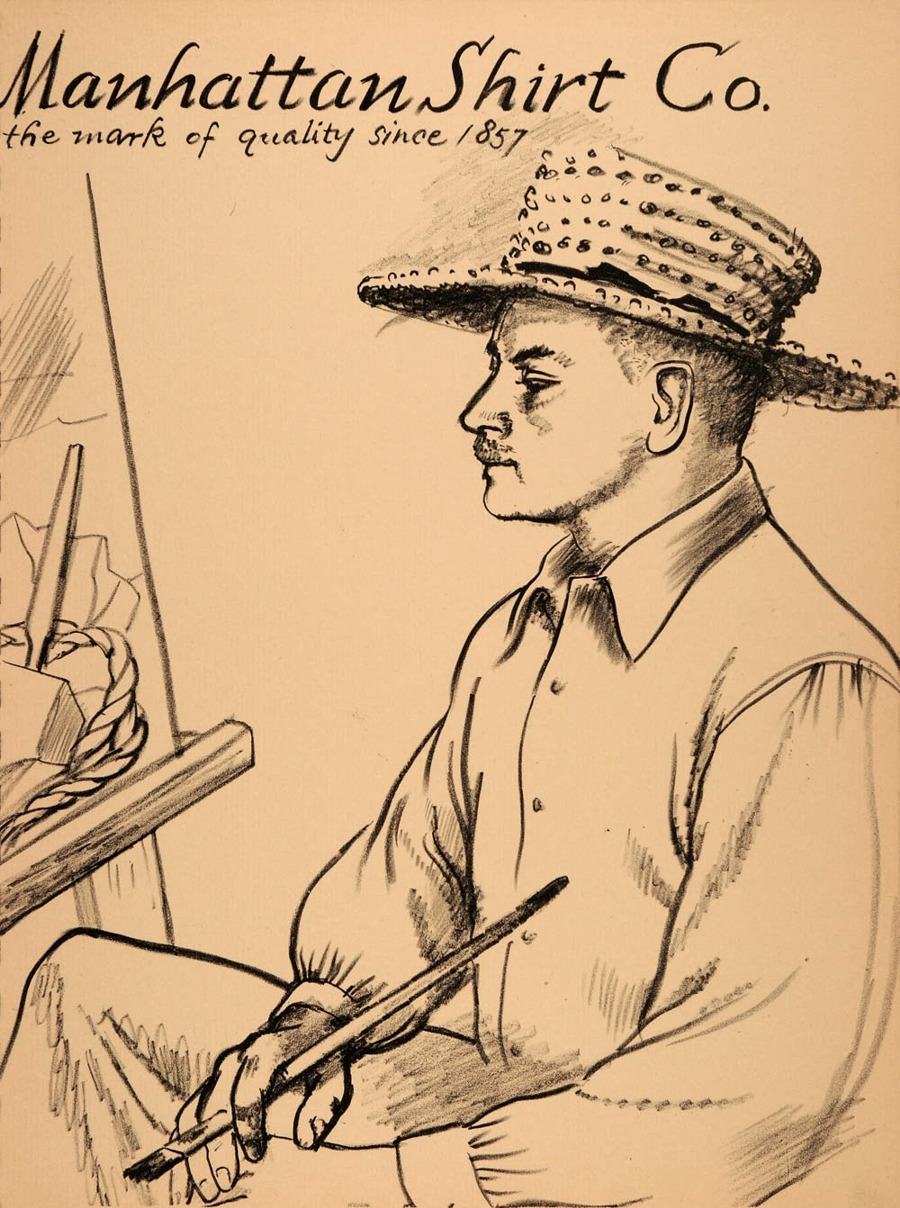 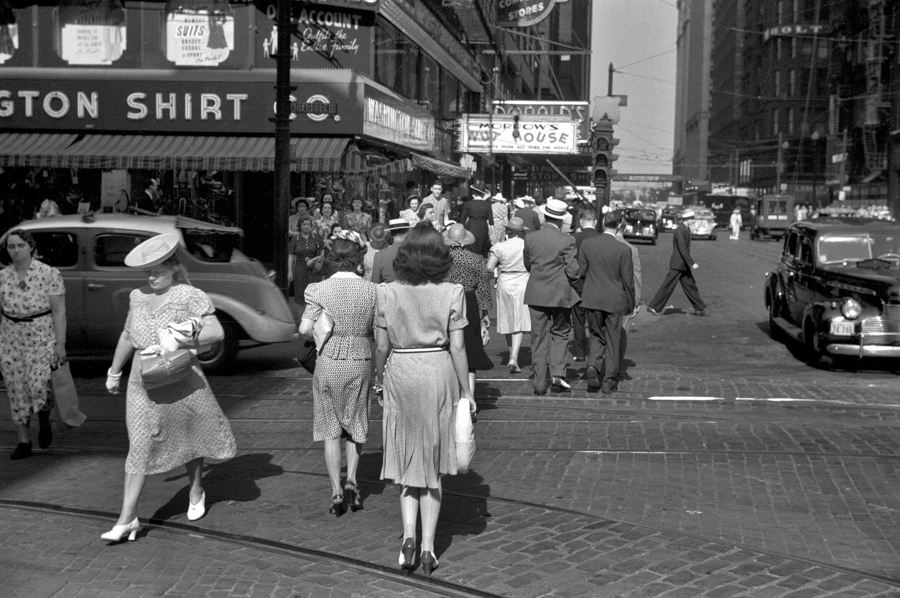 Some of the same businesses are visible in this photo, including Morrow’s Nut House. Donald’s Jewelry, and Stop & Shop. The most obvious difference is the Washington Shirt Company on the northeast corner.

According to a Chicago Tribune article published in 1935, the Washington Shirt Company occupied this corner since 1895. Here’s an interesting tidbit from 1907: “The Washington Shirt Company first featured and promoted the idea of guaranteed sox (love that spelling) for men in the city of Chicago, and for the past 18 months we have supplied sox to customers, backed by our standing guarantee that they would wear without holes for six months from the date of sale.” The price for a box of six of these guaranteed socks was $1.50 in 1907. 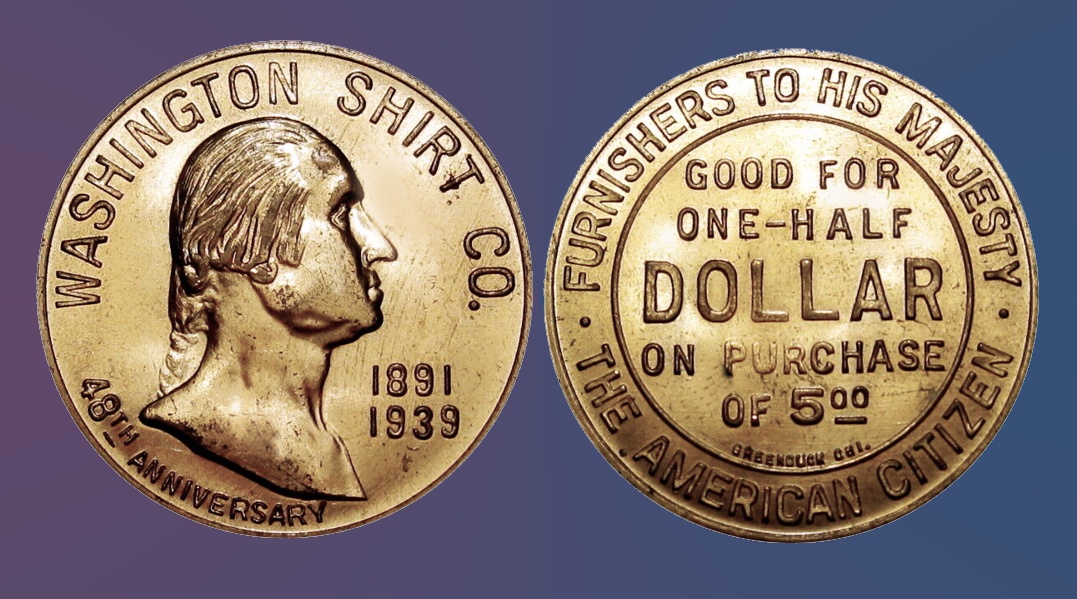 Officially, this company was across State Street, so in a different block, but I felt compelled to include it. Established by J. Myer Lebolt in 1912, Lebolt had locations at 27 N. State Street (visible on the right side of the 1941 photo except for the L) and in the Palmer House at 17 E. Monroe. Initially, the company produced sterling silver bowls, trays, tea sets, and other serving pieces. At some point, they expanded and started crafting sterling and 14 kt gold and gemstone pieces. At one time, they had stores on Fifth Avenue in NYC and in Paris. The jewelry is still available on various auction and antique jewelry sites.

As reported by The New York Times, on January 30, 1964, two armed men and a getaway driver got away with a haul of diamond rings, brooches, and watches from a display case at the State Street store worth $250,000. 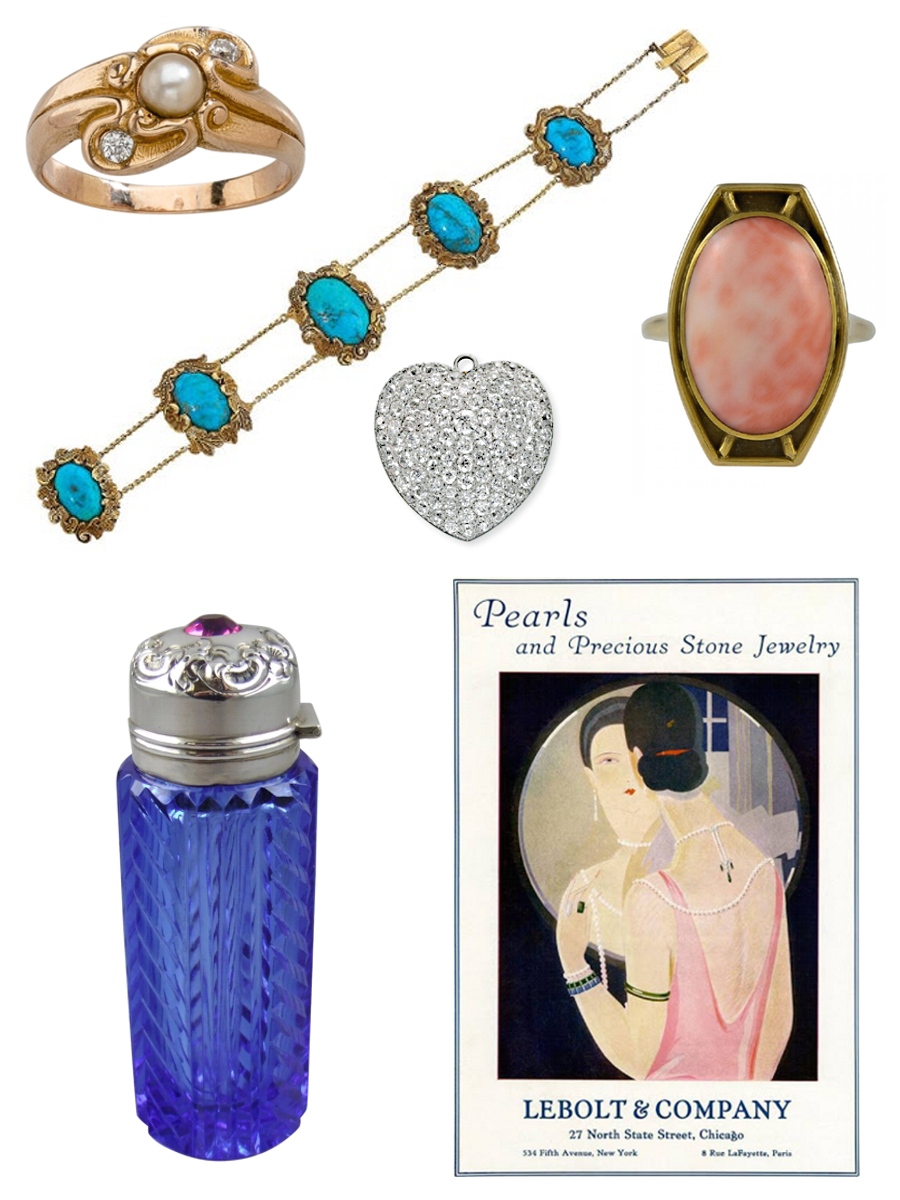 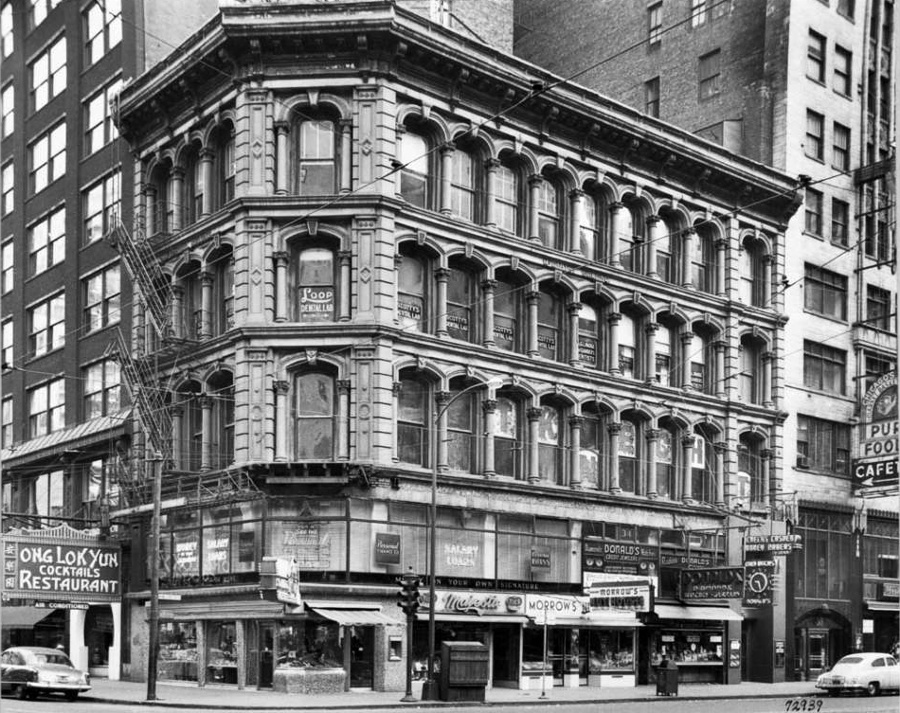 I looked, but didn’t uncover any details about Ong Lok Yun, the Chinese restaurant just north of Washington on Dearborn. I did find it curious that Randolph Street is advertised on this matchbook, considering the restaurant is so much closer to Washington! Then I realized they did this to appeal to theatergoers, given Randolph Street was home to many. Majestic is sandwiched between Dutch Mill Candies and Morrow’s Nut House – a business not seen in the other photos. I can’t discern the other words on the sign – if you recognize this business, let me know! 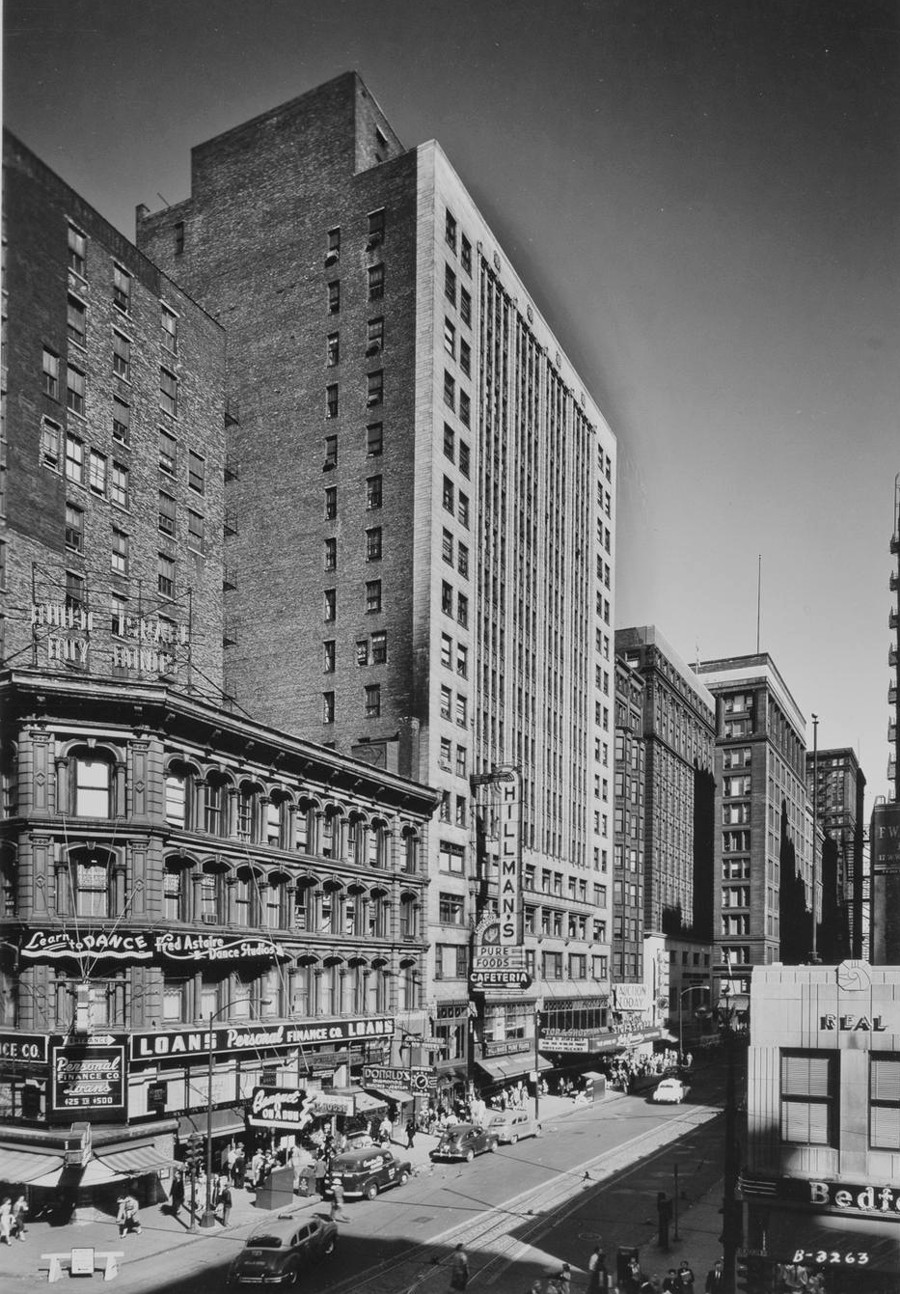 It’s a shame the date isn’t included on this photo, nor the first one in the blog. Perhaps an astute reader will fathom a guess based on the automobiles. In any case, in addition to the prominent Personal Finance Co. signage, two different businesses appear in this photo.

While this location doesn’t exist anymore, the company is alive and thriving across the U.S. and other countries. Co-founded by Fred Astaire and Charles and Chester Casanave in 1947, the studios were franchised in 1950. Today, approximately 140 franchised studios are in business across the U.S., but no corporate-owned studios. The only location in the city of Chicago is at 1239 W. Lake Street.

Banquet on a Bun 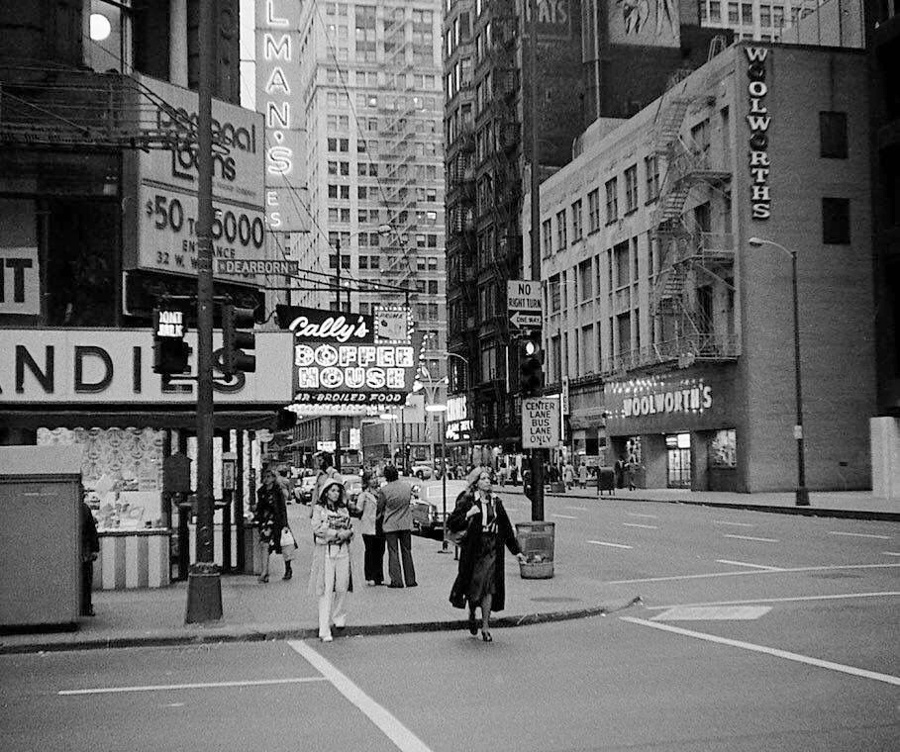 Dearborn and Washington, About 1970

This more recent photo from about 1970 clearly depicts Woolworth with more modern signage, the landmark Reliance Building on the southwest corner of State and Washington, and Karroll’s on the ground floor of that building. A loan company, candy store, and Hillman’s are in the photo, while a coffee shop called Cally’s appears to occupy the space that once housed Banquet on a Bun and possibly Majestic.

Located at 32 N. State and 1 W. Washington, this terra cotta-clad building opened in March 1895. Although Daniel Burnham and John Wellborn Root were commissioned to design a 14-story building at this corner, an existing building had tenants on upper floors that wouldn’t give up their leases. The second, third, and fourth floors of that building were demolished and the basement and first floor were raised. Following Root’s death in 1891, Burnham hired Boston architect Charles Atwood to design the upper floors and completed the building once the leases had expired. This was one of the first skyscrapers to provide electricity and phone service to tenants. In its first few decades, merchants and health professionals rented space, including Al Capone’s dentist. Thankfully, its 1970 landmark status was honored, despite the fact that the building continued to deteriorate throughout the next two decades. The city of Chicago purchased it in 1994 and it was beautifully restored. Unlike so many other historic Chicago buildings that were razed, this one had a happy ending…a fitting end for this story.