Connecting the Past to Present in NYC Photographs

Over the last two years, I have scanned black and white negatives and a few color slides I shot in NYC between late 1976 and 1980 when I was a student at the Rhode Island School of Design. My older sister lived in various apartments in SoHo and Greenwich Village and I visited every chance I got on school breaks. I enlarged and matted about 25 of these photos and took them with me when I moved to Rotterdam, the Netherlands in July 1980. I never printed any of the other photos, so scanning them provided an avenue of rediscovery of my own youth and a gritty NYC that no longer exists. This project summoned an array of emotions and memories about this “coming of age” period in my life and the inevitable passage of time. 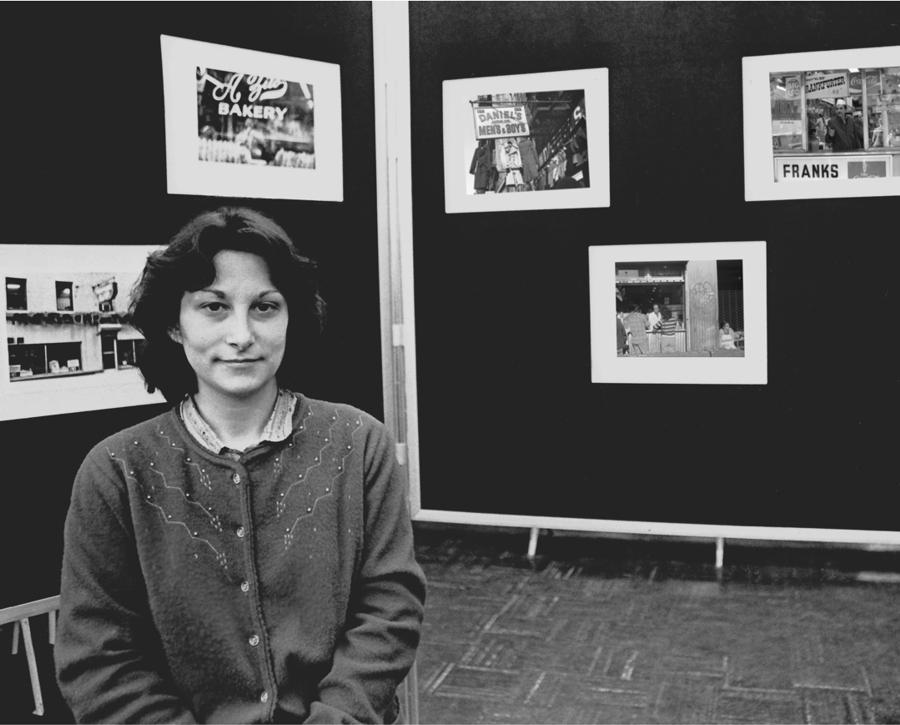 In 1981, I showed these photos in Rotterdam and got some press, one of which was a little critical and missed the point of my photographs. The critic said that my photographs lacked the social commentary of Bruce Davidson’s work. Although I admire Davidson’s work, it was never my intention to emulate his socially conscious photography. A few select photographers informed my early photographic work – especially those who worked for the Farm Security Administration, such as Walker Evans, Russell Lee, Jack Delano, and the great photographer Berenice Abbott. Today, my photos have far more meaning than they did back then because they picture a NYC that no longer exists due to gentrification, over commercialization, and greed disguised as progress.

I was a little astonished that I ventured into areas that were considered dangerous back in the 1970s, as evidenced by many articles written on this dark and turbulent era in NYC history. Yes, the city was edgy and dangerous, subway cars were covered with graffiti, Son of Sam murdered six young women from 1976-1977, and Etan Patz disappeared on May 25, 1979. I’ll never forget the posters of the little boy plastered all over SoHo and Greenwich Village. I remember walking very quickly past the Bowery to get to the Lower East Side to photograph the streets captured in prior eras by photographers I admired, including my Brooklyn-born dad. My sister and I were followed when we went to a laughable off-Broadway production of No Exit in Hell’s Kitchen.

The Magic of Times Square

To me, Times Square in the late 1970s was visually stimulating beyond my wildest dreams − at once magical and decadent. It was a far cry from my ivory tower art school existence in Providence and even farther from my idyllic suburban Chicago upbringing. I never dreamed of venturing to South State Street and taking photos of strip clubs there, nor to West Madison which was Skid Row. I think being away from home emboldened me to photograph places that came with some risks.

In July of this year, I finally bit the bullet and bought my first smartphone. I did so mainly because I wanted to start an Instagram page for my 1970s NYC photos and eventually monetize it. I’m not a Luddite by any means, but I was resistant because I am turned off by the way so many people are addicted to their phones and didn’t want this technology to take over mine. I started my page nycinthe1970s on August 26 and learned a lot in just four months. While some locations are obvious, I didn’t note where I took any of these photographs, so I often have to do a lot of research, which I truly enjoy. This is the first of several blogs I am posting highlighting some of these photos and related research. 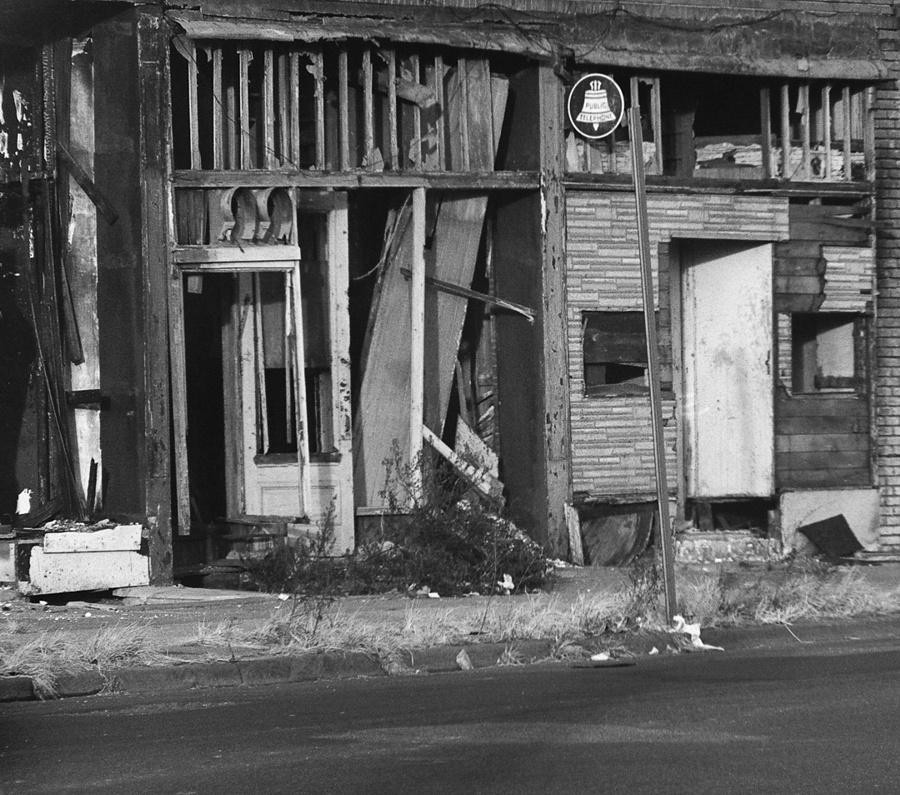 In the 1970s, I nearly tripped over homeless people lying on sidewalks on route to Orchard Street and Essex Market. Men wandered in and out of dingy bars, drank on the streets, and panhandled. CBGB was literally an oasis of punk cool amid desolation. The Bowery was gritty, dirty, and somewhat dangerous, yet nobody ever bothered me. Today, the Bowery is home to hip hotels, Whole Foods, $17 million penthouses, the New Museum, Supreme, and a dwindling number of restaurant supply stores. 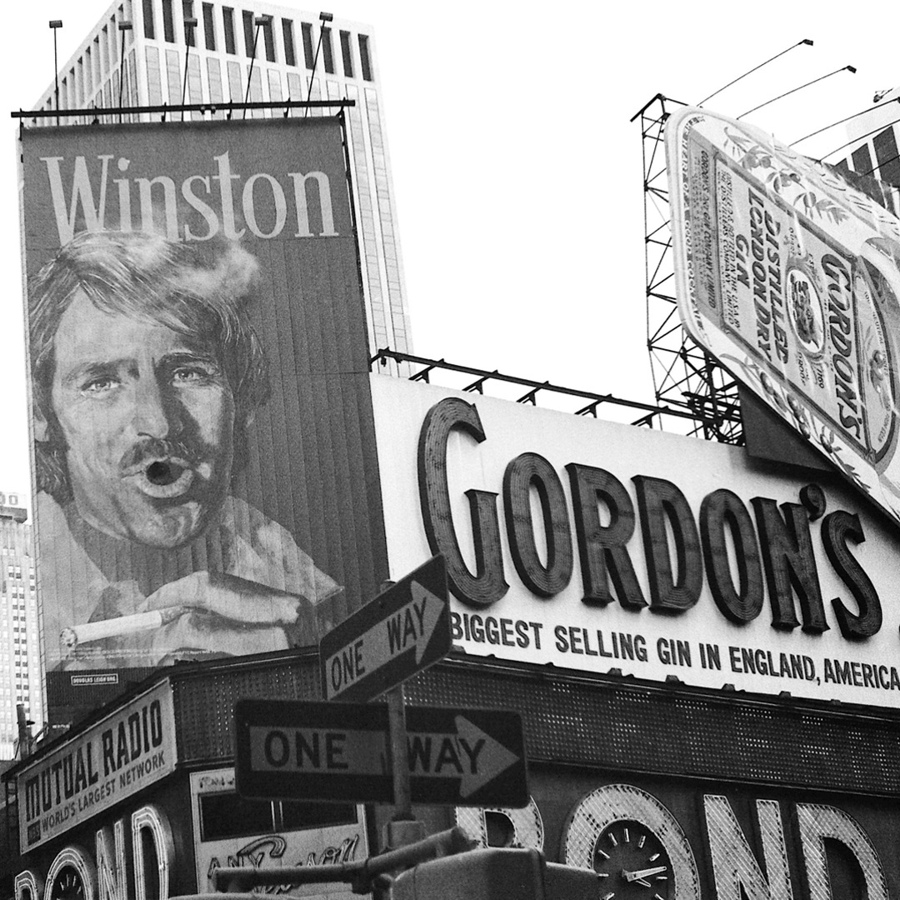 From 1941 until 1966, a Camel sign designed by advertising executive and lighting designer Douglas Leigh puffed four‐foot smoke rings from a billboard along the east side of Broadway from 43rd to 44th Street. In 1972, Leigh cooked up the idea for a new Winston cigarettes sign at the southeast corner of Broadway and 45th Street. This flanked his nearly block-long Gordon’s Gin sign. The Winston sign measured 31 by 54 feet and the smiling man’s head was 28-feet tall! As with the Camel signs, the steam was produced in a copper box just behind the head of the man to simulate smoke billowing from a lit cigarette, with as many as 1,000 smoke rings per hour! By September 1977, the sign had been removed because it was too expensive to operate. The Bond store in the photo opened in 1940 and closed in 1977. Leigh also designed the original colored lighting scheme for the Empire State Building – he died in 1999 at the age of 92.

Man with a Cause: Harry Robert Britton, April 1977 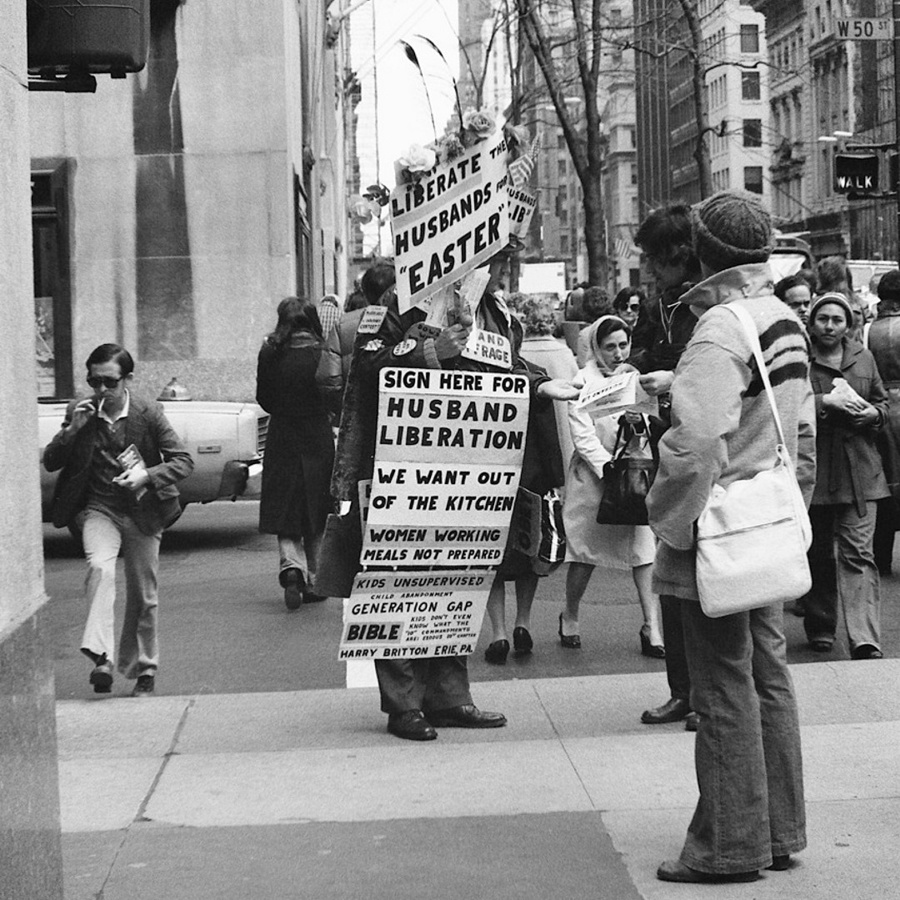 Harry Robert Britton stood out in a crowd to such a degree that The New York Times wrote an article about him on December 7, 1974 entitled: Man With a Cause Tells It in Signs. From head to toe, Britton wore misogynist signs with rants about Husband Liberation and the failings of women, three auto horns, and two bronze cowbells around his waist. He wanted to silence “women libbers with mouths like septic tanks” in his own acerbic words. When I took this photo, Britton had already been working the streets of NYC for 3 1/2 years, having commenced his male chauvinist protests in October 1973. I didn’t have an inkling about his story until I read the Times article a few months ago – not surprisingly, I found other articles about him and many photos, including several Getty Images.

Britton was kicked out by his wife Lillian after she went to work to support their children, much to his consternation. He had been laid off in 1966 by General Electric and conducted a one-man strike outside the plant for 17 months, at which point he was committed to a psychiatric hospital. He told the Times that he escaped from the hospital in 1970, stowed away on the S.S. France, was captured, and returned to Bellevue Hospital in Manhattan. After his release that year, he moved to Washington, D.C. where he started his Husband Liberation campaign, setting up shop near the White House. He lived there for three years before gifting the Big Apple with photo ops. Harry died in 1981 at the age of 55 and Lillian died in 1984 at the age of 58. 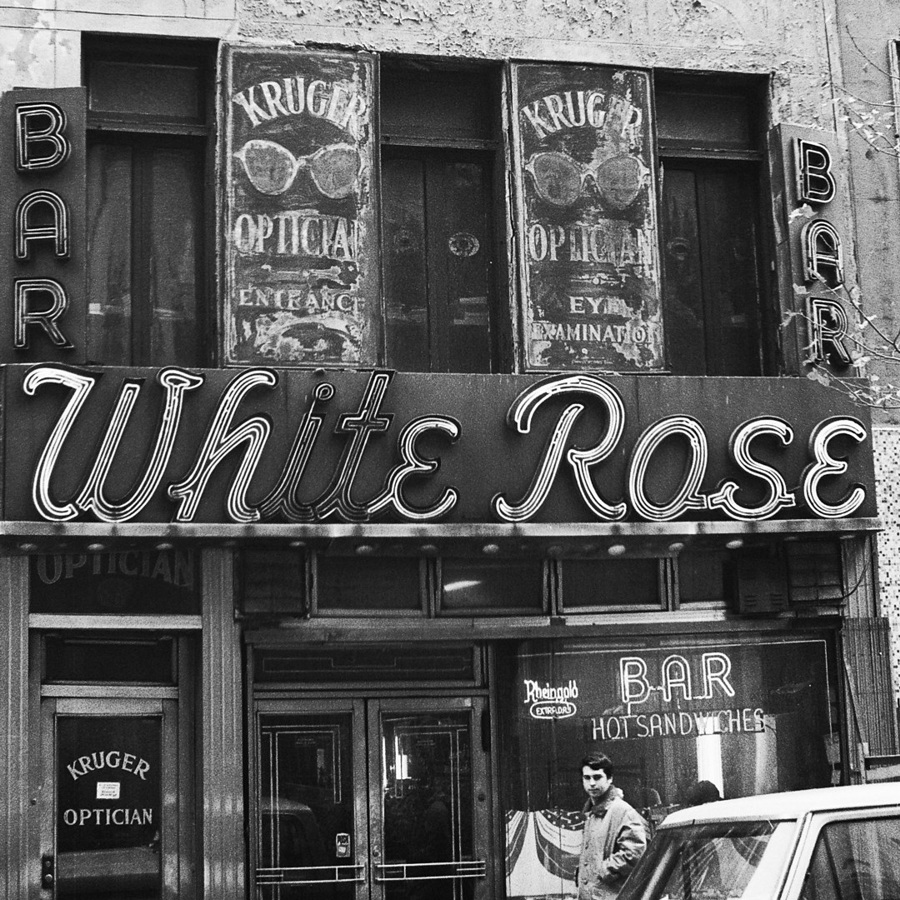 Although White Rose bars have vanished, they once graced different neighborhoods of NYC. I was able to track down locations at Whitehall and Front Streets, Fulton Street, 803 Sixth Avenue, and near Madison Square Park. Andreas Feininger, Charles Cushman, W. Eugene Smith, and other photographers shot NYC street scenes with White Rose Bars figuring prominently in the composition. Apparently, White Rose was one of Joan Didion’s favorite haunts. William Soshnick, one of five immigrant brothers who fled the oppression of Russo-Poland, was the second owner of Beefsteak Charlie’s, as well as White Rose bars, small markets, and butcher shops. I did a lot of sleuth work and while I couldn’t find anything on Kruger Optical, I think this White Rose was the one on Sixth Avenue between 27th and 28th Streets. 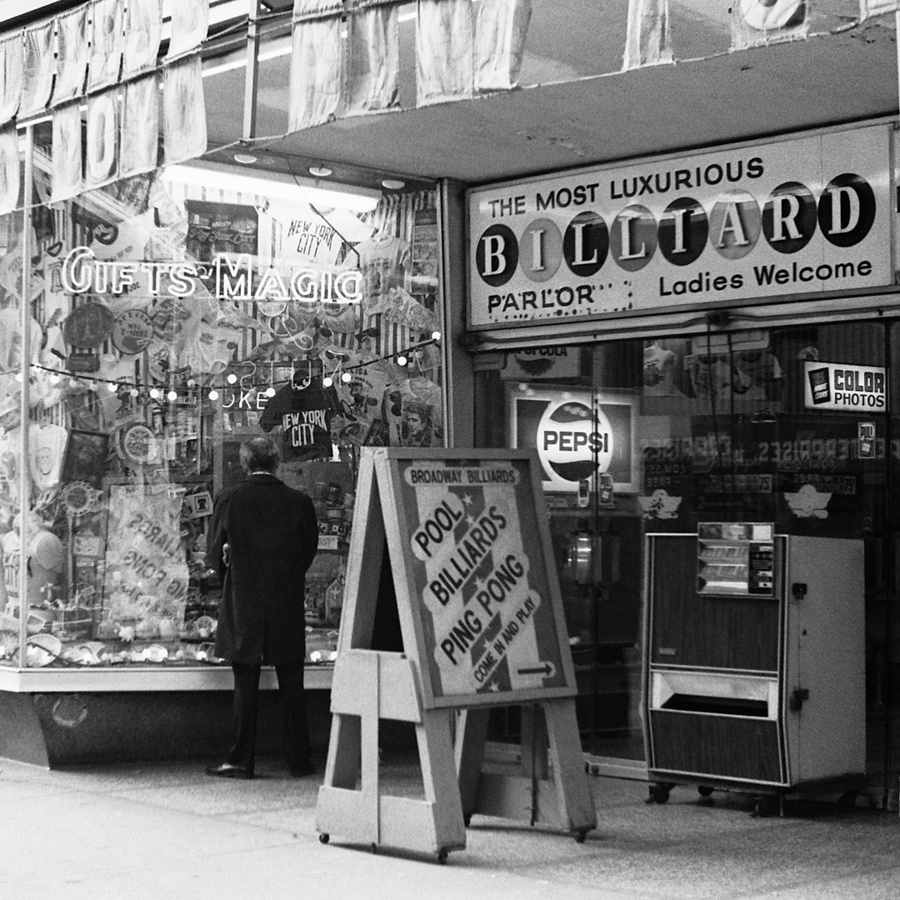 Broadway Billiards was at 52nd Street and Broadway and appeared to share the space with a souvenir/gift shop. I have no idea when it went out of business. 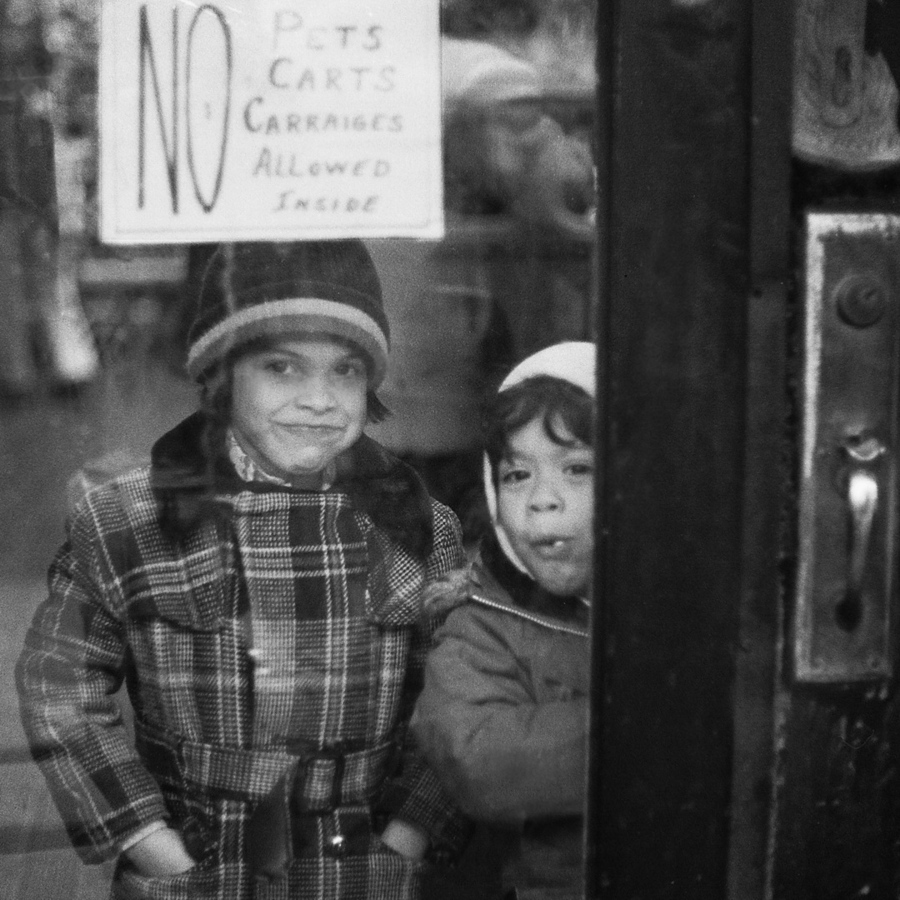 I admired street photos of children in the Family of Man book an art school friend gave me in October 1976. This shot was inspired and influenced by the wonderful vintage photos of children playing on NYC streets by Helen Levitt, Morris Engel, and his wife Ruth Orkin. 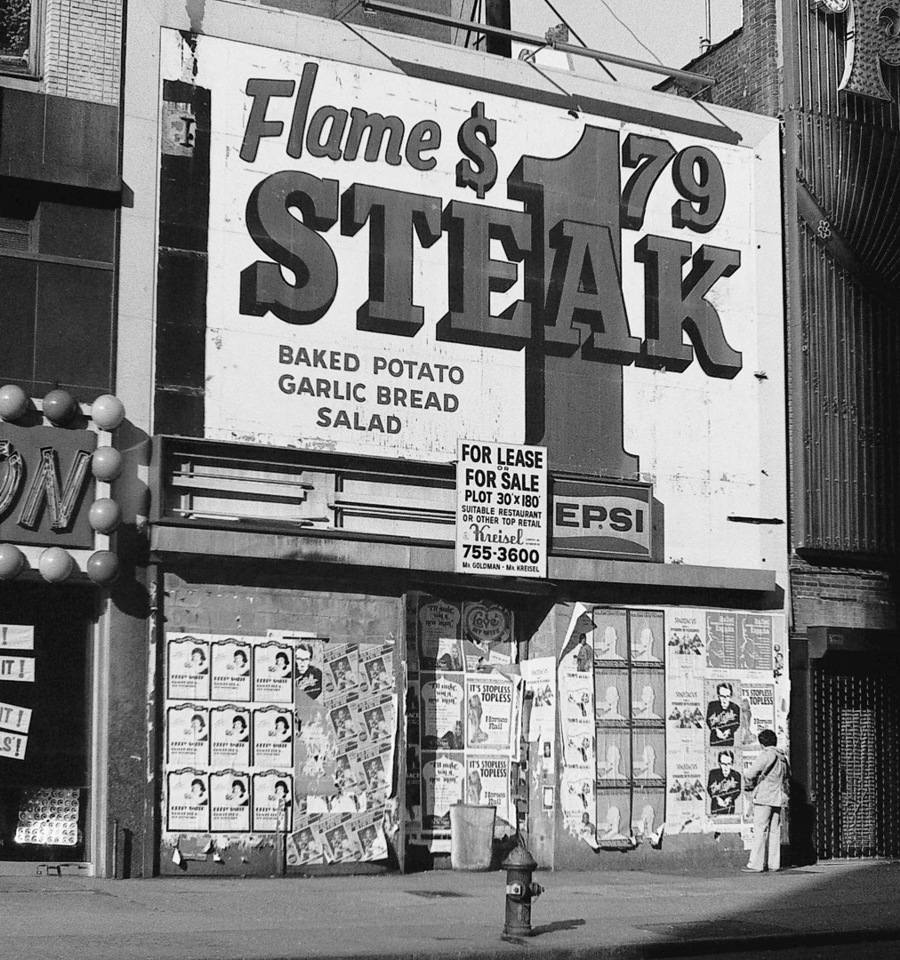 Just to the north is the X-rated Pussycat Cinema, which was demolished in 1987 to make way for a skyscraper. Today, this block is completely unrecognizable, gentrified, and homogenized. Eventually, Pussycat expanded into this space as evidenced in later photos I found. I like the posters on the shuttered Flame Steak, including Elvis Costello, It’s Stopless Topless at the Horses Rail, 114 W. 45th Street, and I Love My Wife. The latter was a musical satire of the sexual revolution that opened at the Ethel Barrymore Theatre on April 17, 1977 and closed on May 20, 1979, after 857 performances and seven previews. 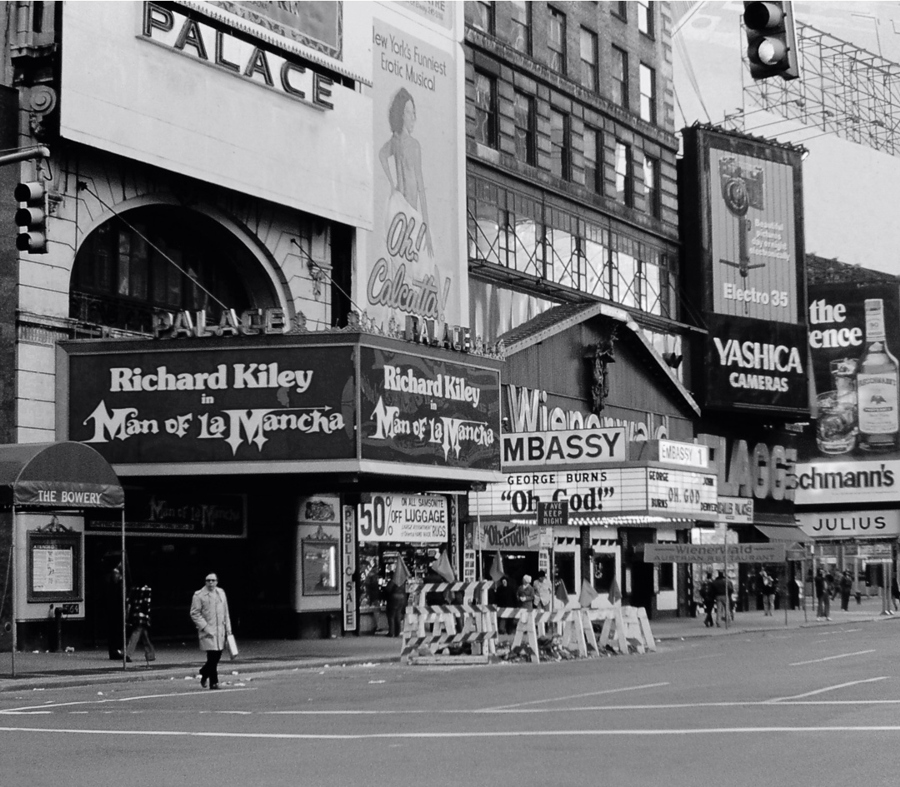 The Palace Theatre at 1564 Broadway was renowned for vaudeville from its opening on March 24, 1913 through 1929. The movie Citizen Kane had its world premiere at the theatre on May 1, 1941. It was primarily a playhouse, although Judy Garland, Bette Midler, Liza Minnelli, Diana Ross and others performed live concerts there. La Cage aux Folles had a long original run at the Palace from 1983−1987. The theatre is currently undergoing renovation and is scheduled to reopen in 2022, at which time it will be the newest and biggest Broadway theatre in NYC.

The Embassy at 1560 Broadway opened in 1925 and was designed by famed theatre architect Thomas Lamb in a French Renaissance style. In 1929, Guild Enterprises assumed ownership and it became the first movie theatre in the U.S. to operate as an all newsreel theatre until 1949, when it started showing first run movies again. It was renamed New Embassy 46th Street on August 13, 1968, then Embassy 1. The building was awarded landmark status in 1987 by the NYC Landmarks Preservation Commission and closed in 1997 as a cinema. It found new life as the Times Square Visitors Center from 1998 to June 2014. In November 2019, Pelé Soccer Store opened in the space. 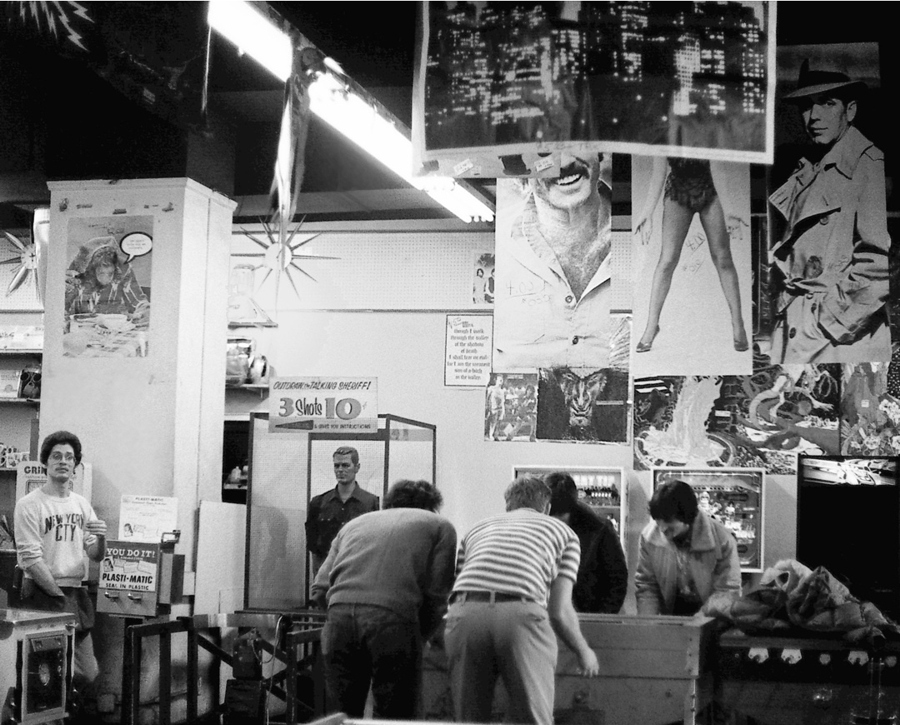 Times Square in the 1970s-1980s wasn’t all X-rated movies, peep shows, pimps, prostitutes, drug dealers, con men, and seedy sleaze. It was neon-lit signs and arcades, carnival-type shooting galleries, pinball, billiards, foosball, cheap eats, and souvenir shops with a dazzling array of cool stuff made in the USA or Hong Kong. As a young artist coming of age, Times Square was visually amazing and beyond anything my inventive imagination could conjure. I can say with certainty this arcade was on Broadway, but not certain if it was one of the Playland arcades or Fascination. The attendant is striking such an odd pose, he looks like a wax figure from Madame Tussauds! 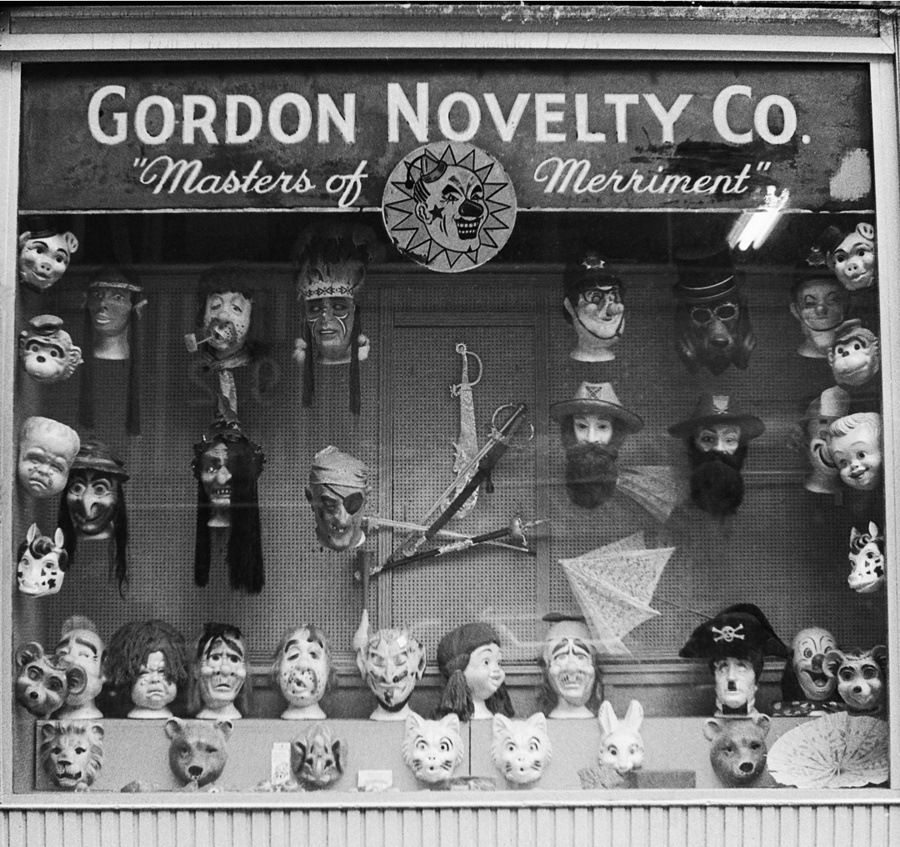 All photographs except first one, Copyright Betsy van Die, 1976-1979. Please message me if you’re interested in purchasing a print.