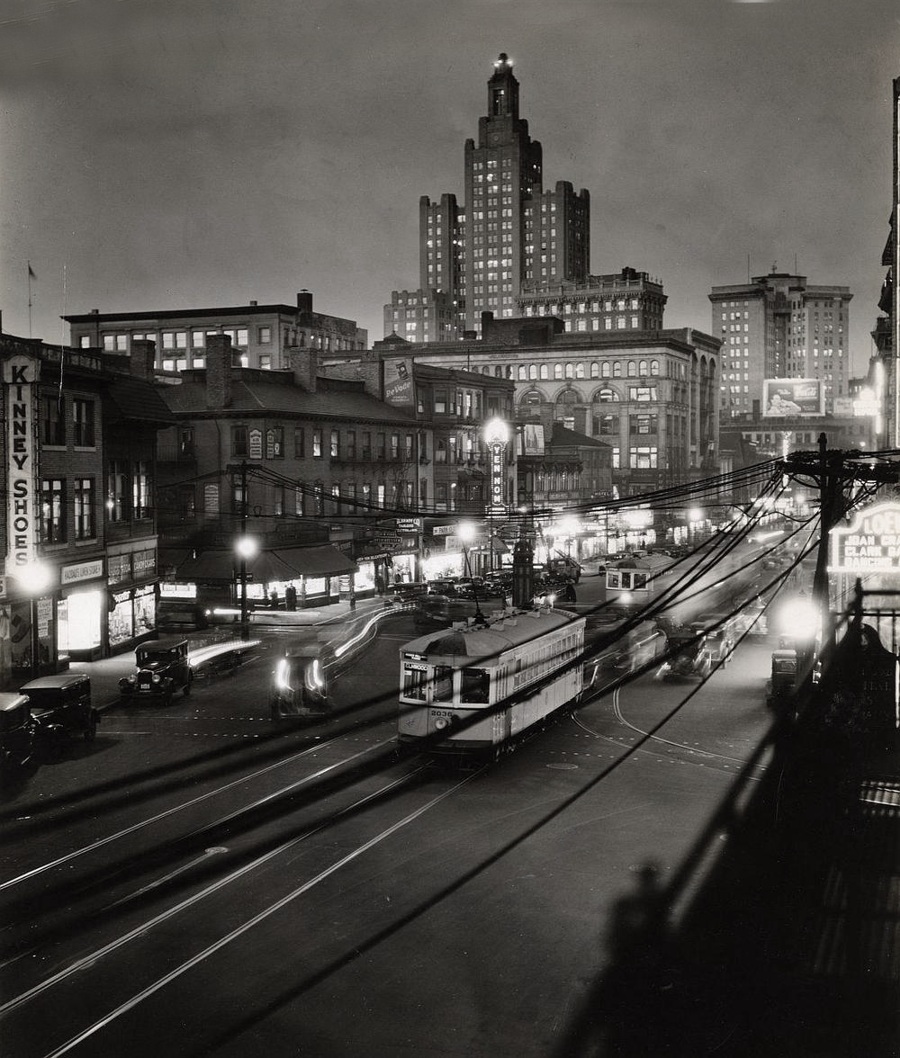 I have many fond memories of exploring downtown Providence during my art school days at the Rhode Island School of Design. It was somewhat decayed and run down and I liked that aspect.  I already wrote about historic buildings and personal memories of past haunts on Westminster Street, in an earlier and more comprehensive blog.

The oldest street traversing downtown Providence, Weybosset Street curves along its length, intersecting with Westminster at the northeast end. The origins of Weybosset date back to the Pequot Indian Trail, which originally traversed the southern edge of Weybosset Hill at its northeast end. A bluff existed on the narrow eastern end of Weybosset Neck at the current site of the Turks Head building. The name used by Indians for the crossing point in the Providence River between the east and west sides was Waubosset, which means “at the narrow passage.” In the 18th to 19th centuries, various parts of Weybosset (especially from Dorrance to Chestnut Street) were called Broad Street, however, by 1893, the entire length was known as Weybosset.

Until 1964, Weybosset curved north to meet Westminster in front of the Cathedral of Saints Peter and Paul. The western portion of the street was closed to create the Weybosset Hill Redevelopment Project parcel. And in 1978, the Westminster Center Project transformed the street into a uniform width from Mathewson to Dorrance Street, while creating a park like area on the street’s north side. 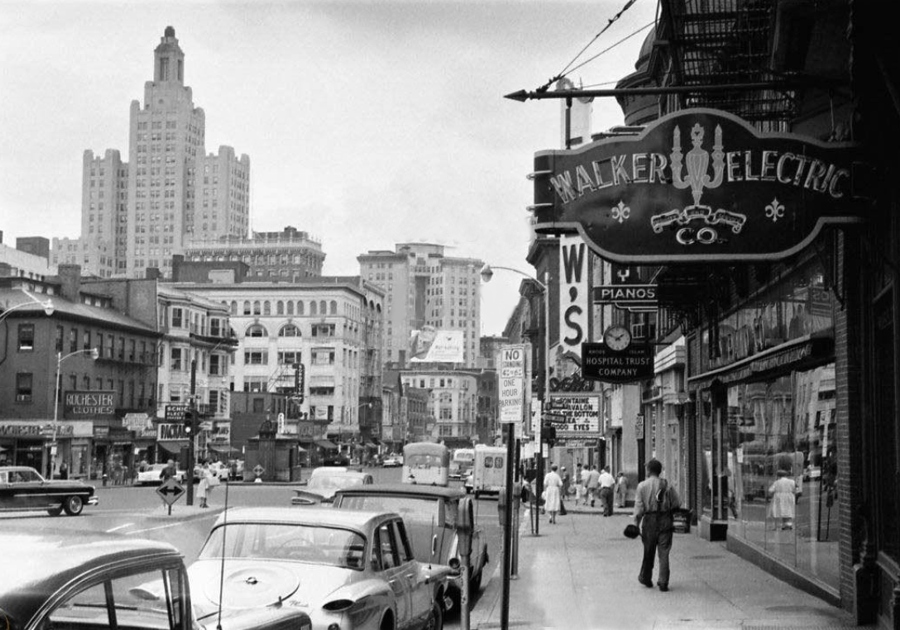 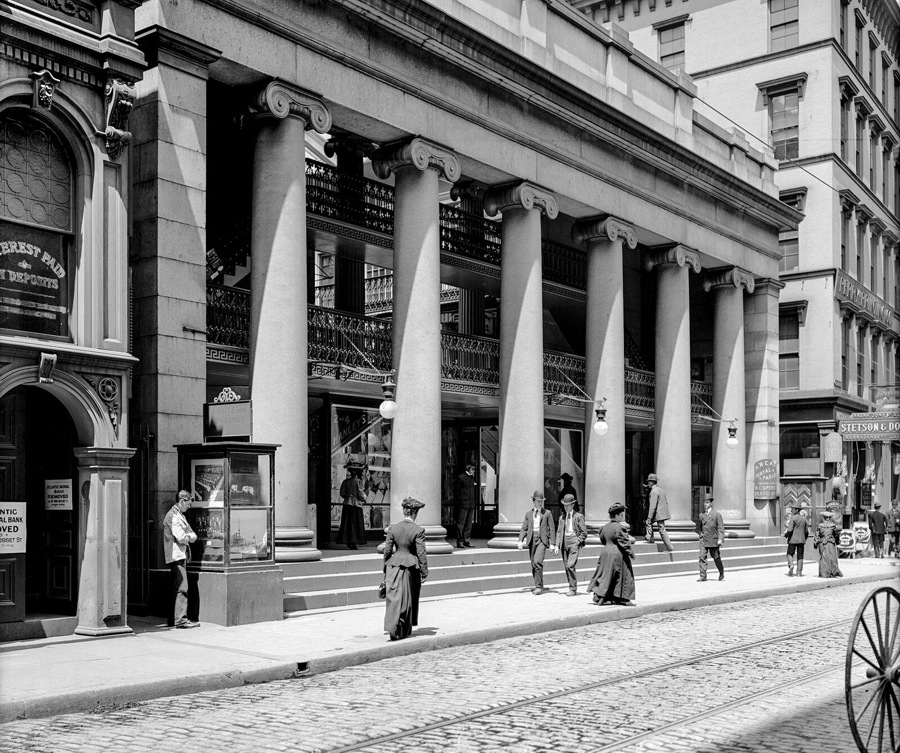 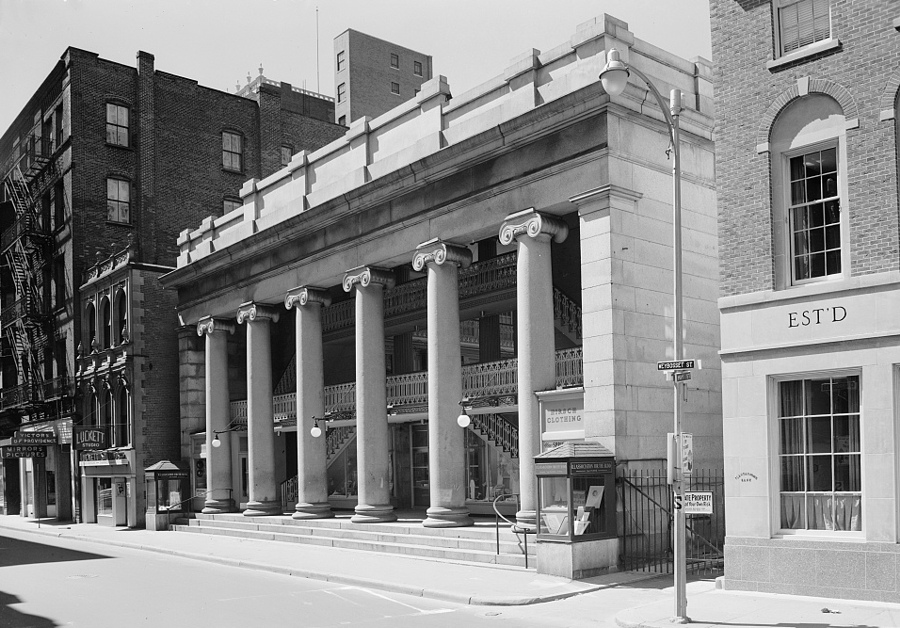 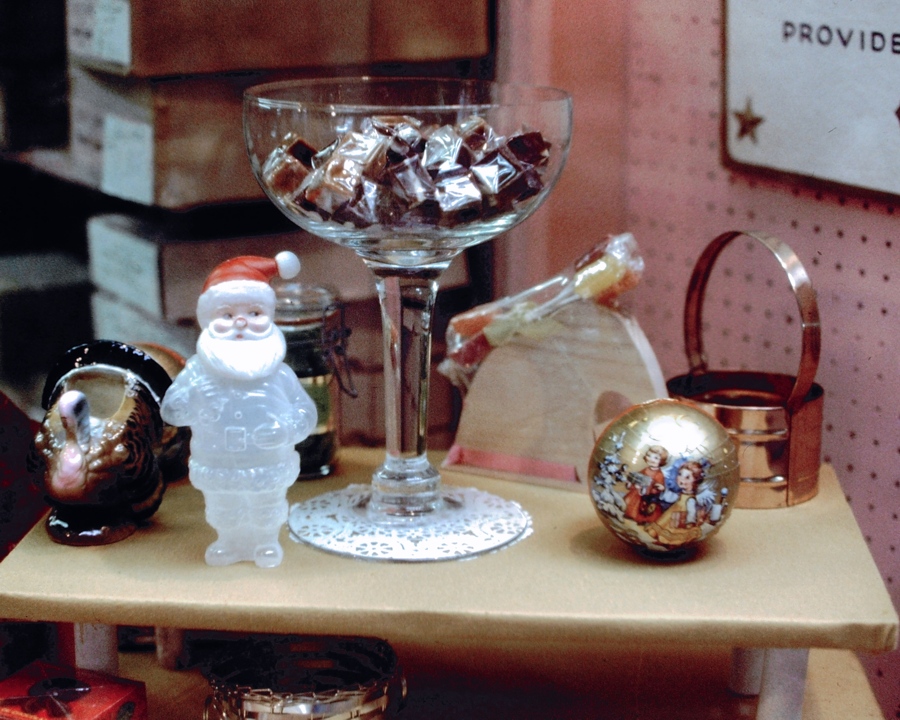 Built in 1828, the Arcade is the nation’s oldest indoor shopping mall featuring Greek Revival columns, granite walls, and classic facades. I found a few charming trade cards from Arcade businesses, pictured in the above gallery. The Arcade is a commanding presence on both Westminster and Weybosset Streets. It was designated a National Historic Landmark in 1976, the year I arrived in Providence to start my freshman year at RISD and rehabbed in 1980. It has changed several times over the last four decades, most recently closing in 2008 and re-opening in 2013. During my RISD days, the owner of an upscale candy shop in the arcade gave me free candy for my Love and Art class. 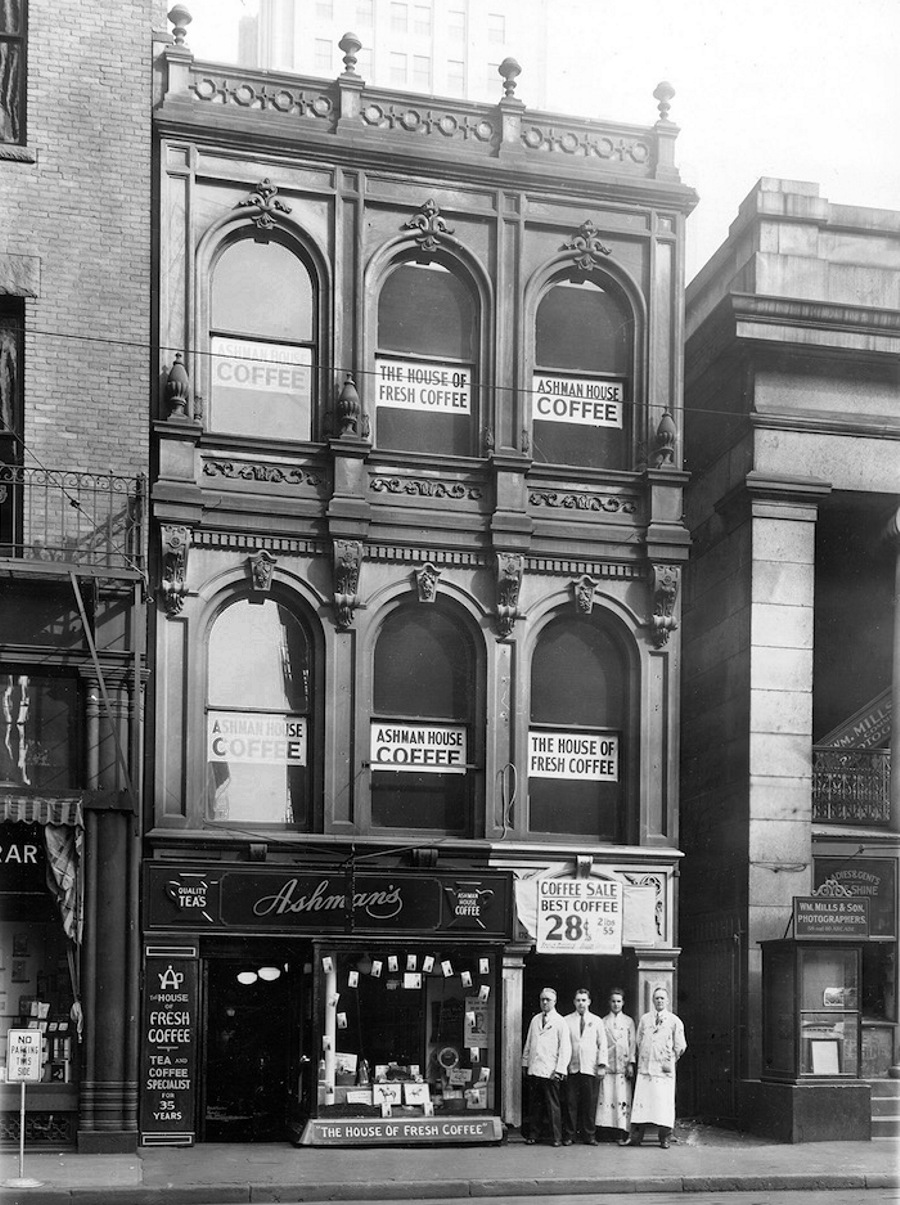 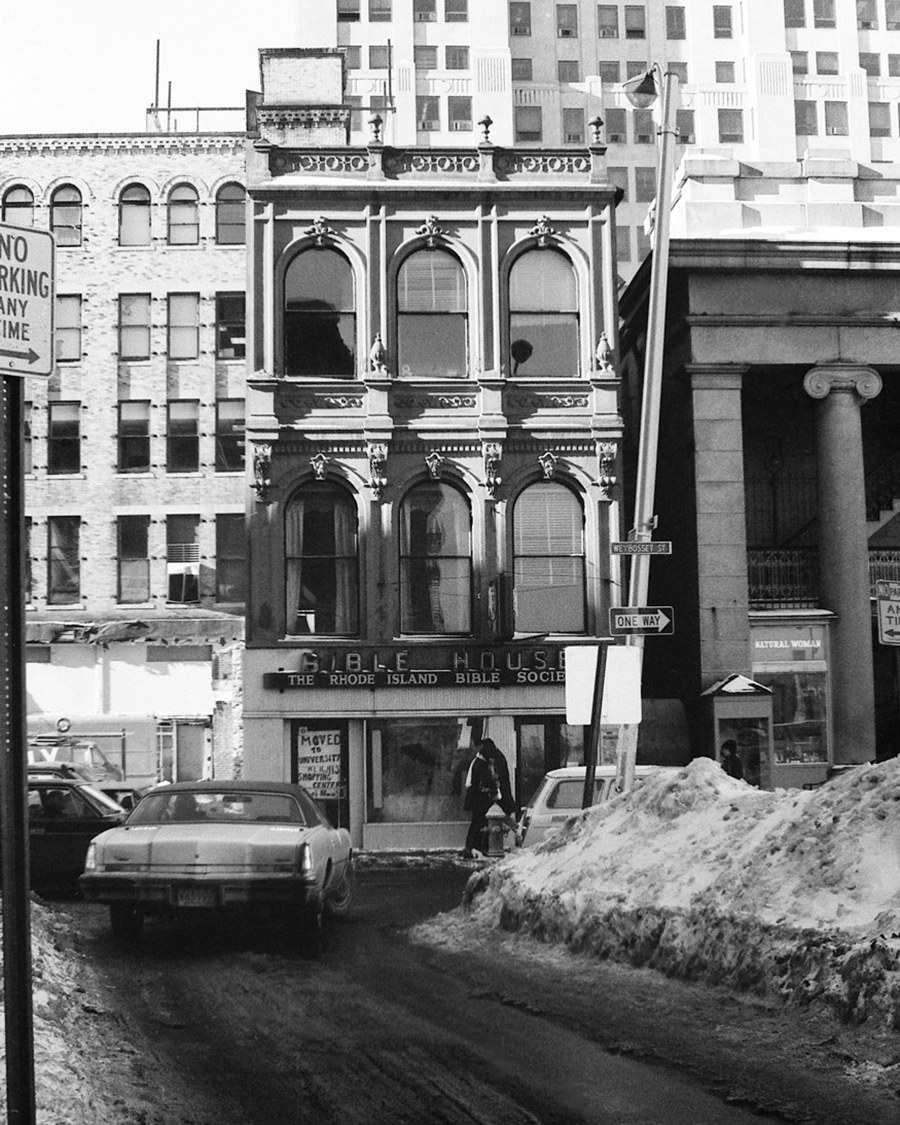 The beautiful building known as the Atlantic Bank Building dates back to 1866 and later housed Ashman House Coffee. When I shot the second photo, the Bible Society had already moved to University Heights Shopping Center, which is the same strip mall with Star Market and a laundromat I would hike to from my Meeting Street apartment. Founded in 1813, the mission of this society is to distribute free Bibles to poor Rhode Islanders. Its early leaders were Jabez Bowen (the first president), Moses Brown, his son Obadiah M. Brown (the first treasurer), and Moses Brown’s son-in-law William Jenkins (the second treasurer). It’s currently a division of the Rhode Island State Council of Churches. 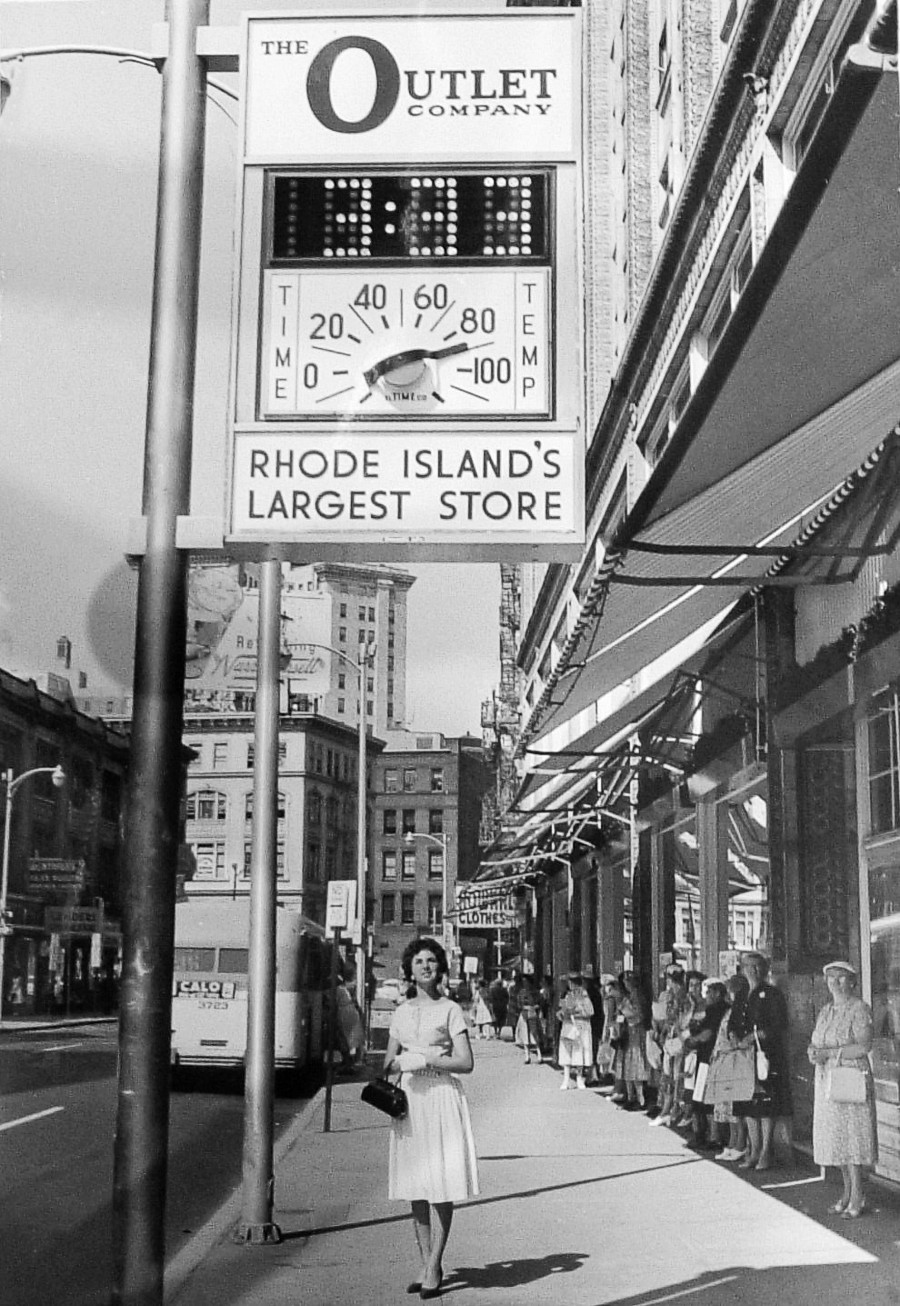 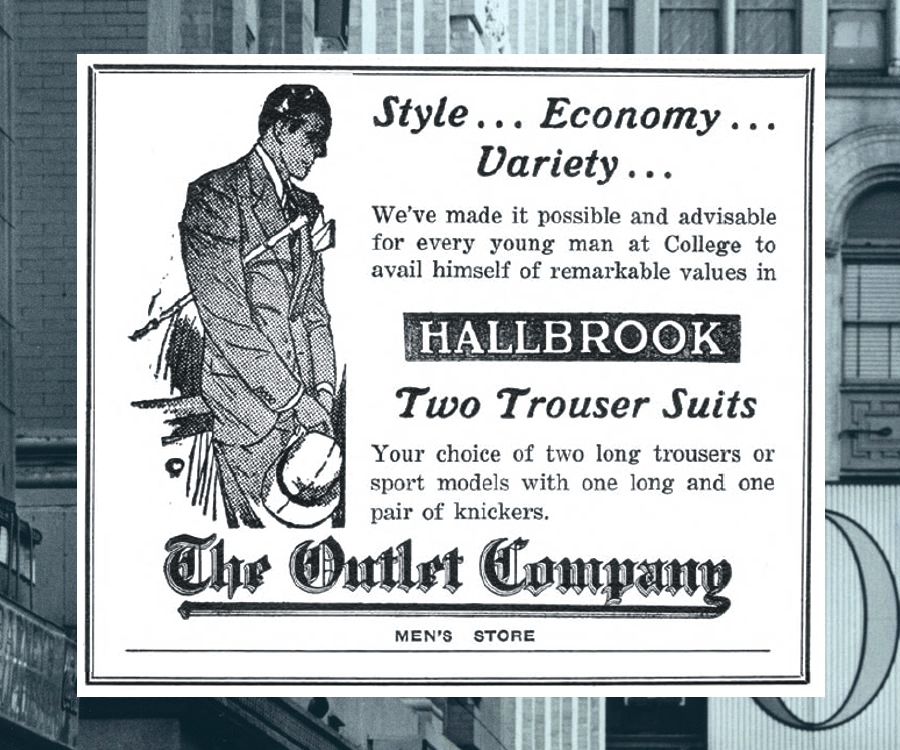 Established in 1891 by brothers Joseph and Leon Samuels, The Outlet occupied an entire city block and attracted shoppers from across southern New England. The flagship store remained highly successful for decades and the owners decided to diversify in the mid-20th Century, opening suburban locations and buying other store brands. In 1981, The Outlet Company sold the flagship store and all others to United Department Stores. The downtown Providence store closed in 1982 and the historic building was destroyed by fire on October 16, 1986. I regret that I didn’t take any photos of The Outlet, however, one of my favorite photographers, Jack Delano did in December 1940. 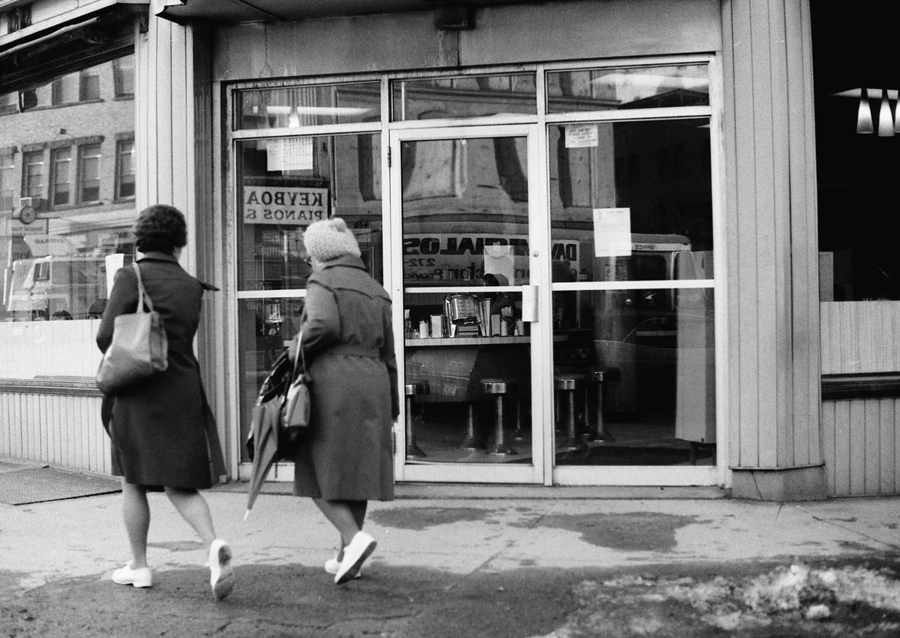 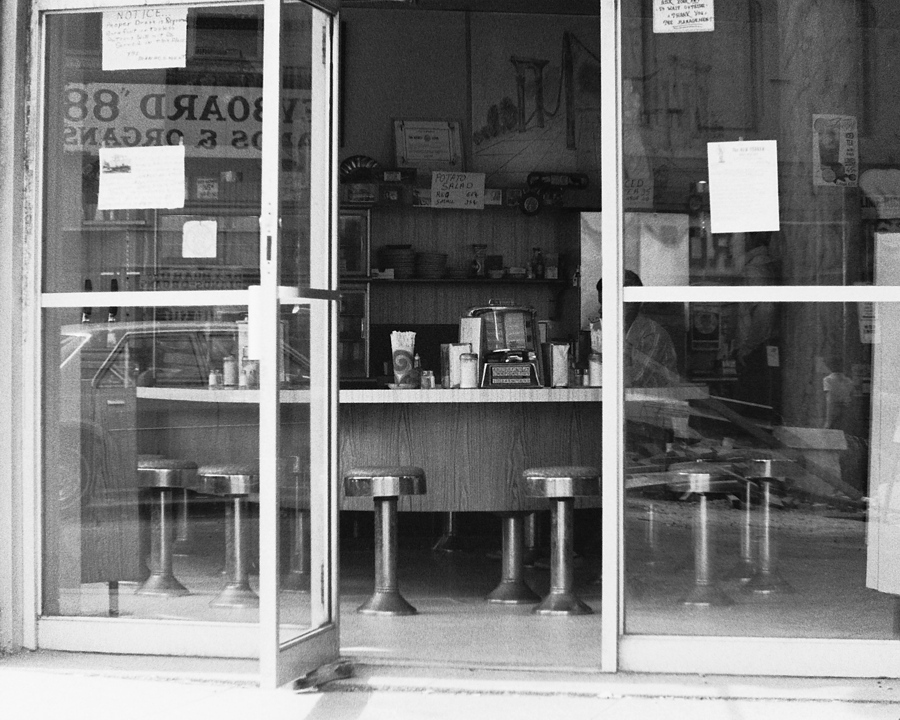 I can’t remember the names of all the little diners and coffee shops I discovered in downtown Providence. For some reason, I never was brave enough to go inside Haven Brothers, which is still in business in a more upscale version. This was one of many old school diners/coffee shops in downtown Providence. Although I never ate there, I loved photographing it. I don’t know the address, but I believe it was on Weybosset on the opposite side of the street as The Outlet, perhaps in the same block. 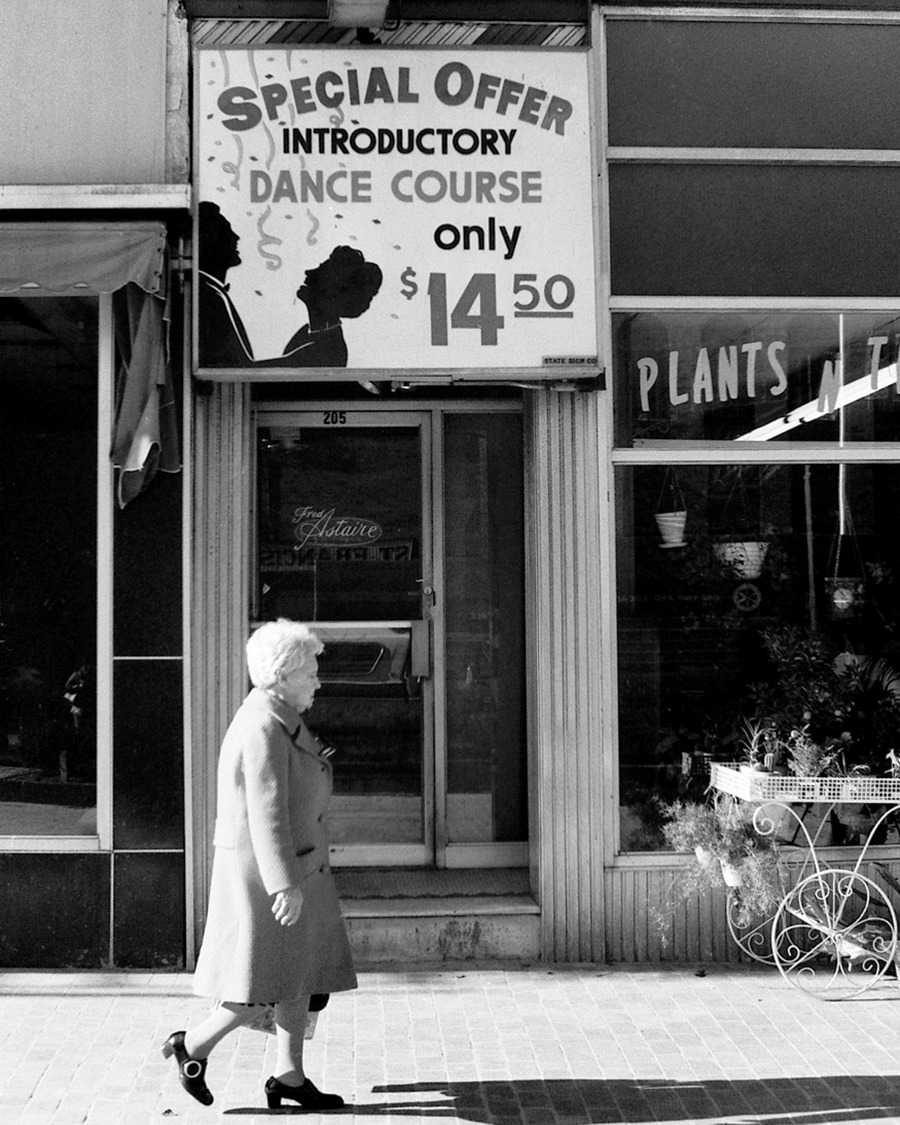 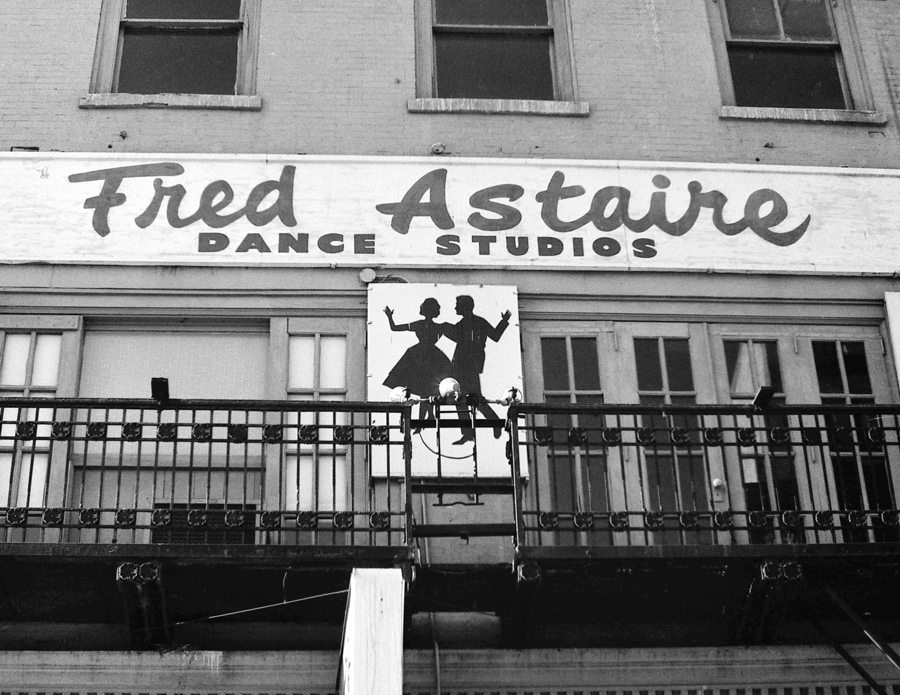 This still thriving dance studio was co-founded by Fred Astaire and Charles and Chester Casanave in 1947. Although Astaire divested his interest in the chain in 1966, he agreed to the continued use of his name. Each franchise is individually owned and operated, with about 140 Fred Astaire Dance Studios in the U.S. alone. Currently, the only R.I. studios are in Warwick and Narragansett. 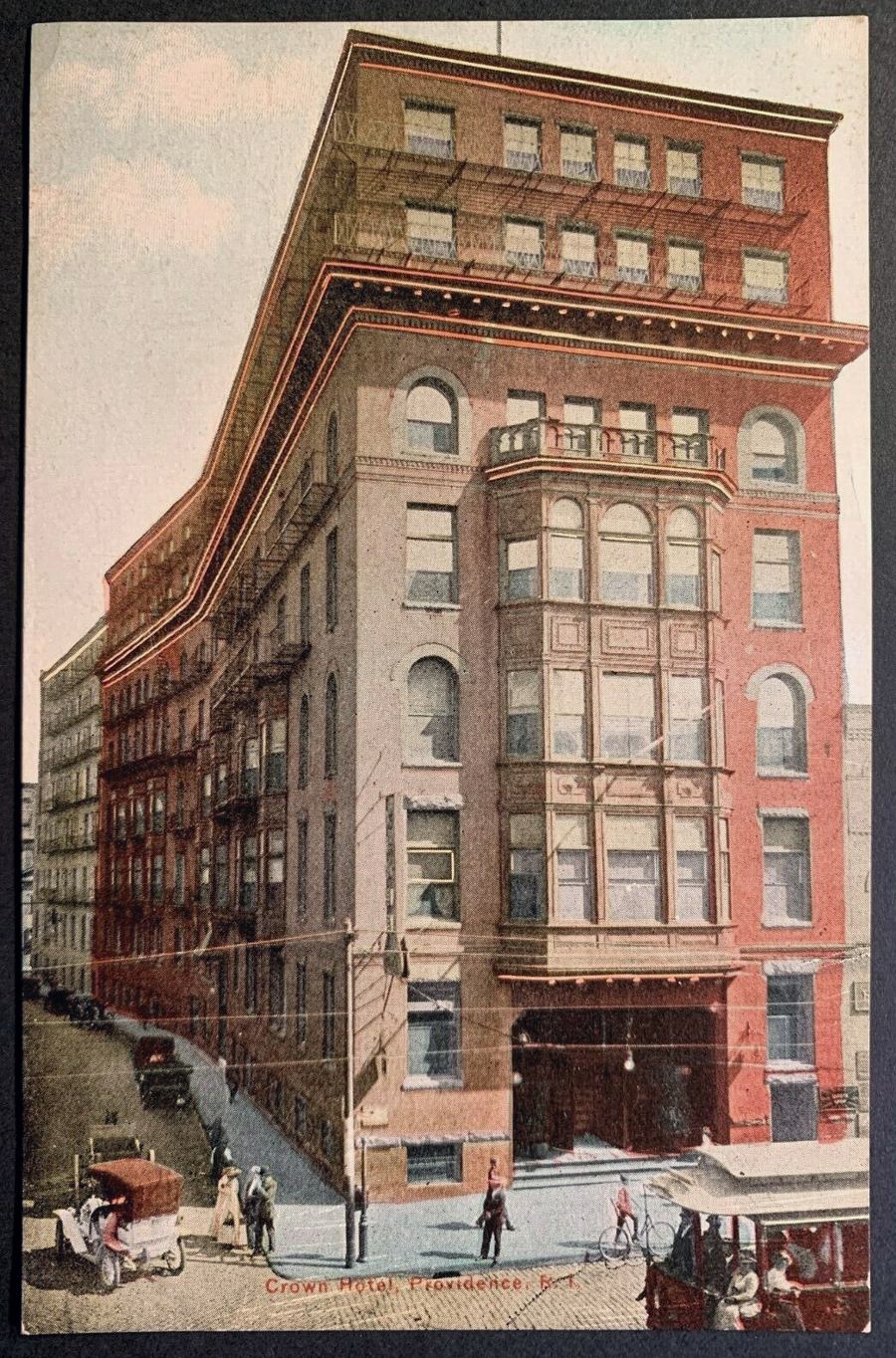 Built in 1894, the seven-story, brick-sheathed, steel frame structure originally housed the Providence Athletic Association. The building was converted to a hotel with addition of the top two stories in 1901. It remained in use as hotel into the 1950s, but suffered gradual deterioration and was bought by Johnson and Wales Business College for a dormitory. Apparently, it suffered a fire and burned to the ground, thankfully when school was out of session. 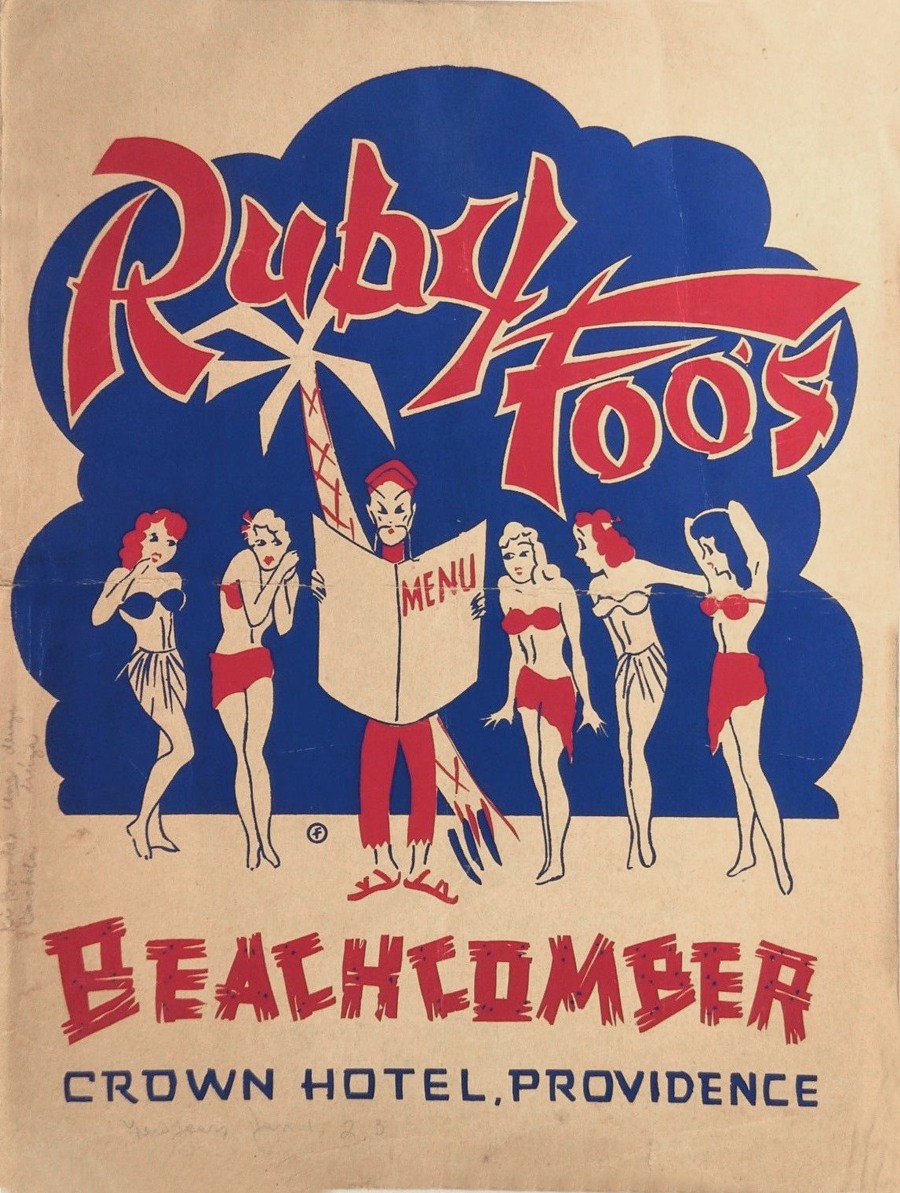 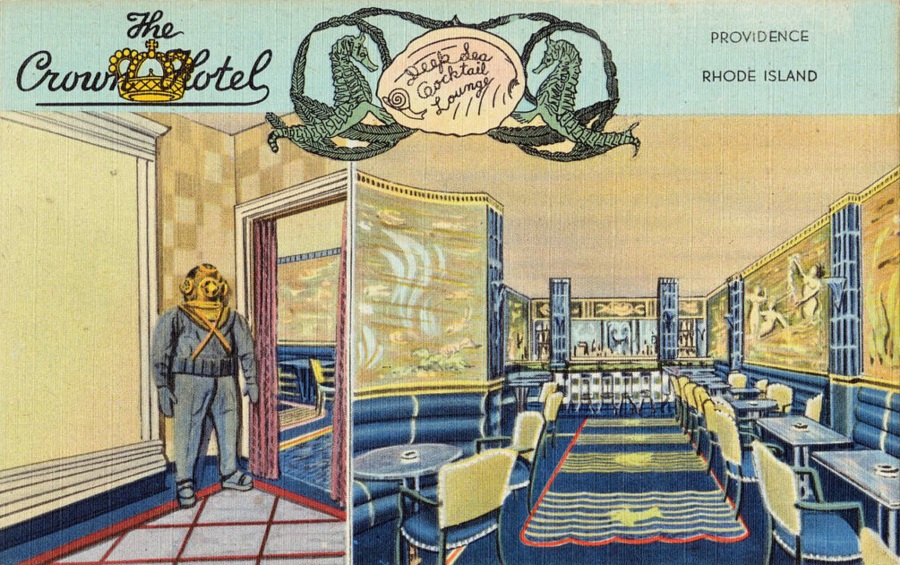 Monte Proser Beachcomber restaurants were based on the Don the Beachcomber location in Hollywood. There was one in the Crown Hotel, with interiors designed by Clark Robinson. In the late 1940s, the Beachcomber changed ownership and became Ruby Foo’s Beachcomber, a chain headquartered in Boston. The hotel was also home to the Deep Sea Cocktail Lounge, which looks so cool.

According to a June 1930 Providence College publication, there was a Howard Clothes in the Crown Hotel Building. When my dad was fighting a valiant but ultimately losing battle against COVID in the hospital at the end of December 2020, I discovered this fact. In one of our last conversations, he was delighted to hear this because Howard Clothes was near and dear to his entire family and we had countless discussions about it. 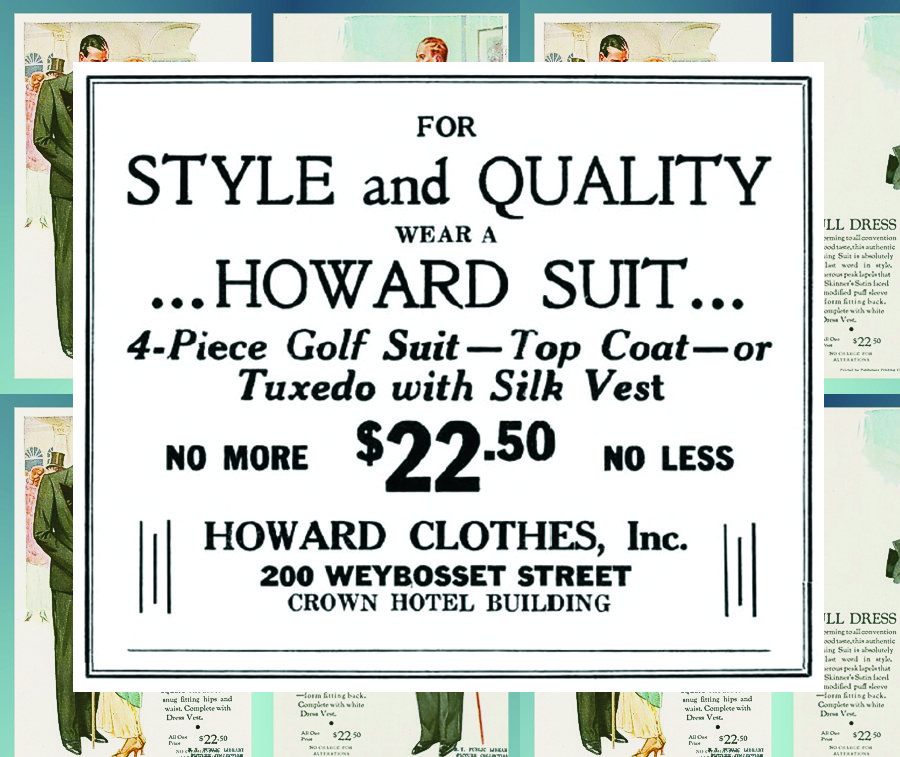 Opened on October 6, 1928, this beautiful movie palace was called Loew’s State Theatre until 1971. Rechristened the Palace Concert Theatre from 1972-1975, rock concerts were the main attraction until the theater fell into a state of disrepair and lost revenue. In 1976, it reopened as the Ocean State Theatre and started showing movies again with limited success, as well as live concerts. The building attained landmark status on the National Register of Historic Places in 1977 and was purchased by sevens founding members: Citizens Bank, Fleet National Bank of Rhode Island, Old Stone Bank, Outlet Company, Providence Journal Company, Rhode Island Hospital Trust National Bank, and Textron, Inc. The non-profit private corporation that owned it renamed it the Ocean State Performing Arts Center and it became the Providence Performing Arts Center in 1982. 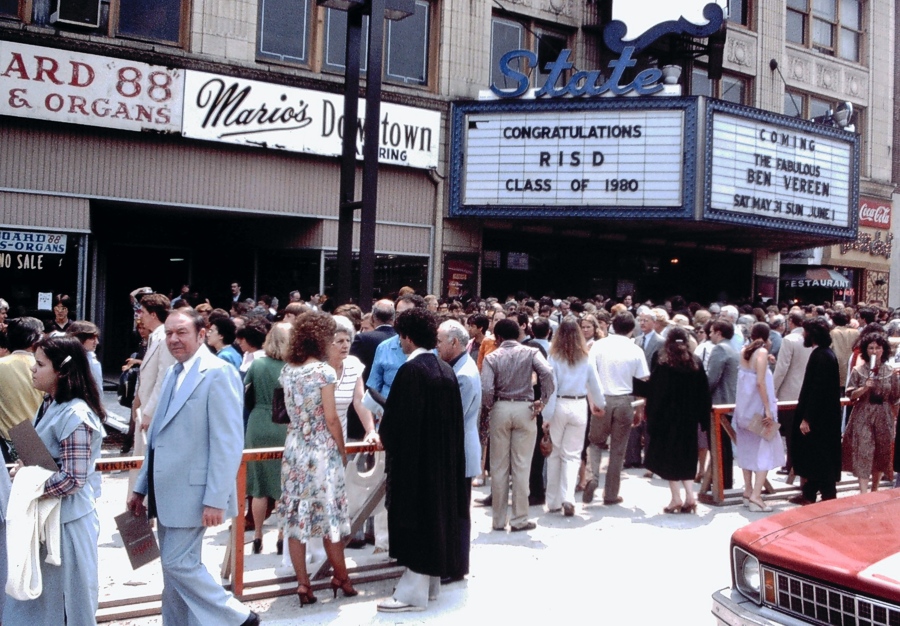 My personal connection is that my graduation from RISD was at this venue on May 24, 1980. A less pleasant memory is that I missed the November 10, 1979 Talking Heads concert because my boss at the Providence Art Club had already given the night off to her favorite waitresses, none of whom had worked there as long as me. I couldn’t find any graphics from that concert, but they returned in November 1980 – nearly six months after I graduated. 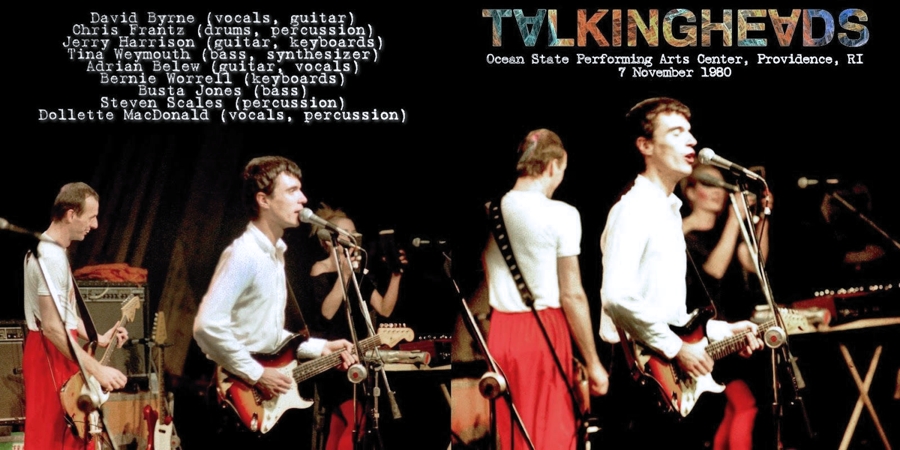 This journey down Weybosset Street isn’t as inclusive as my prior blog on Westminster, so feel free to add comments about your favorite buildings, businesses, and memories of this downtown Providence Street.