Home Art and Culture Tribute to My Dad: His Creative and Cultural Influence on My Life

Tribute to My Dad: His Creative and Cultural Influence on My Life

It’s hard to believe nearly six months have passed since my dad lost his valiant battle against COVID-19. This was my first Father’s day without him and I miss him dearly! But his creative, generous, and witty soul lives in my heart and mind until the end of time. 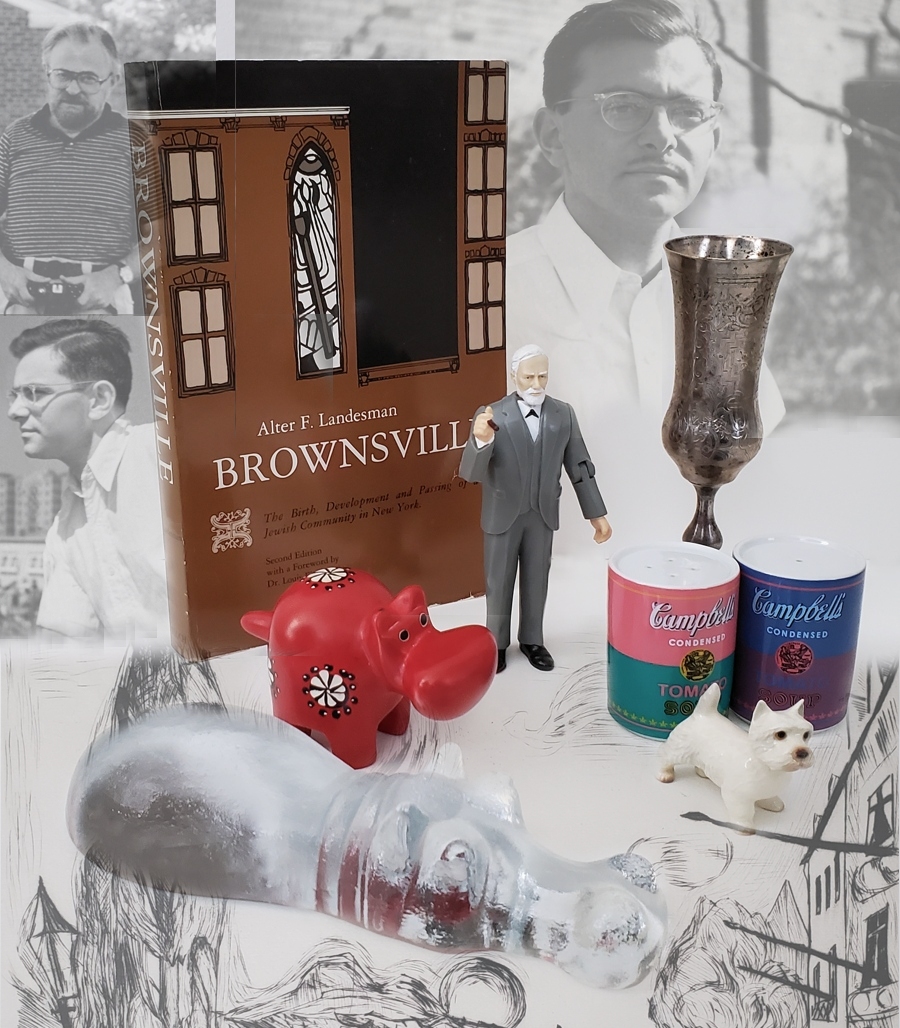 Art and culture infused my dad’s life with richness and he passed this love and appreciation down to all three of his daughters. My dad was a talented photographer and avid art collector and my mom is a fine artist. I inherited both of these talents and they nurtured them in me when I was growing up. I went to the Young Artists Studio at the School of the Art Institute the summer after 8th grade and my parents were thrilled when I was accepted to RISD, a dream I had since I was very young. During my youth through early adulthood, two of their artist friends mentored me – Bebe Krimmer and Caryl Seidenberg.

My dad was a lifetime member of the Art Institute of Chicago and Museum of Contemporary Art (MCA) and I started going when I was quite young. I remember attending the 1967 opening of the MCA at 237 E. Ontario and seeing some crazy installations. They also had these weird vending machines with little artist stickers and I got one with photos of naked boobs which I misplaced shortly thereafter. 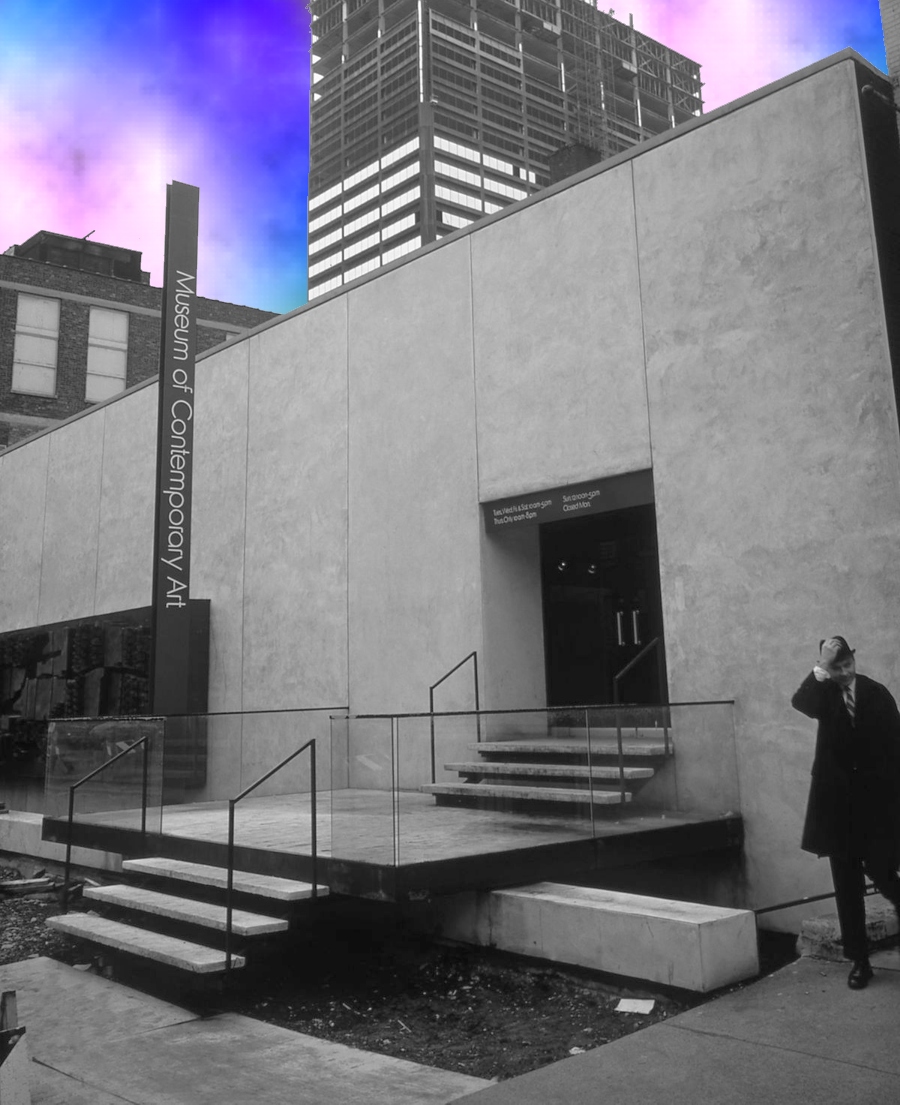 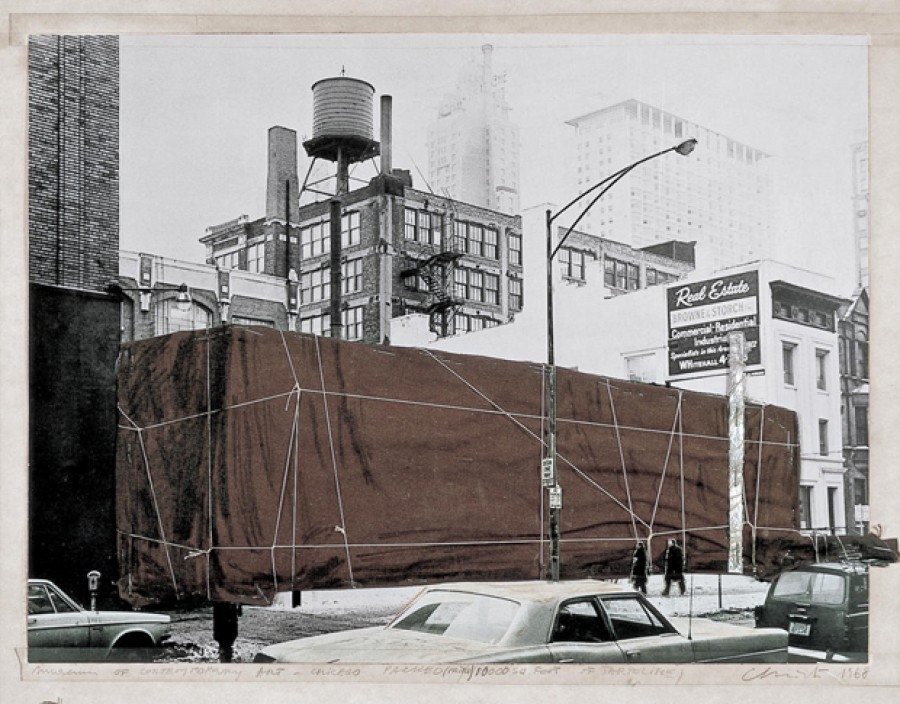 My dad was also a longtime member of several NYC museums including MOMA, the Met, the Jewish Museum, and The Morgan Library. He was a passionate art collector with an affinity for German expressionism and photography. The first print he ever bought was a portrait by Rembrandt, oddly from Phyllis Kind, who later was known for exhibiting and furthering the careers of the Chicago Imagists and Hairy Who. He loaned a Nolde, Corinth, and Heckel to the MCA for their 1978 exhibit, Art in a Turbulent Era: German and Austrian Expressionism. More recently, he donated several beautiful photographs and prints from his art collection to the Smart Museum. 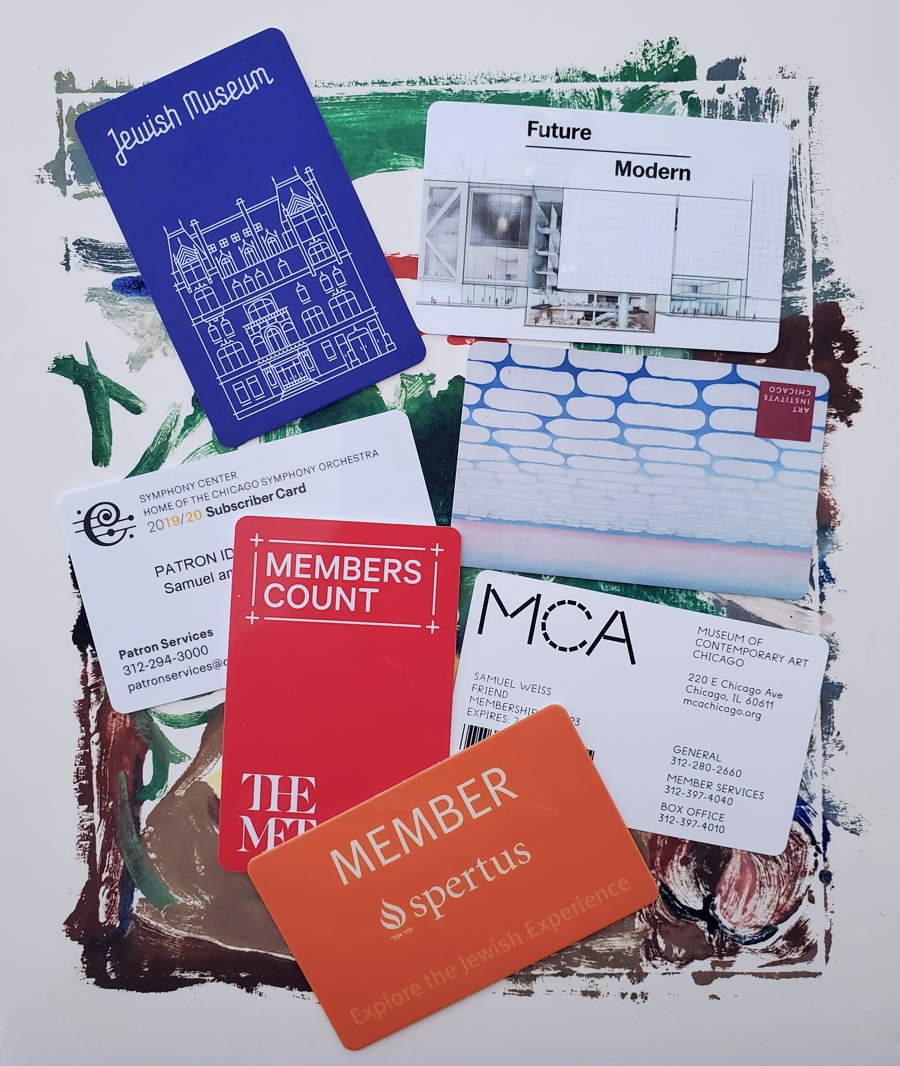 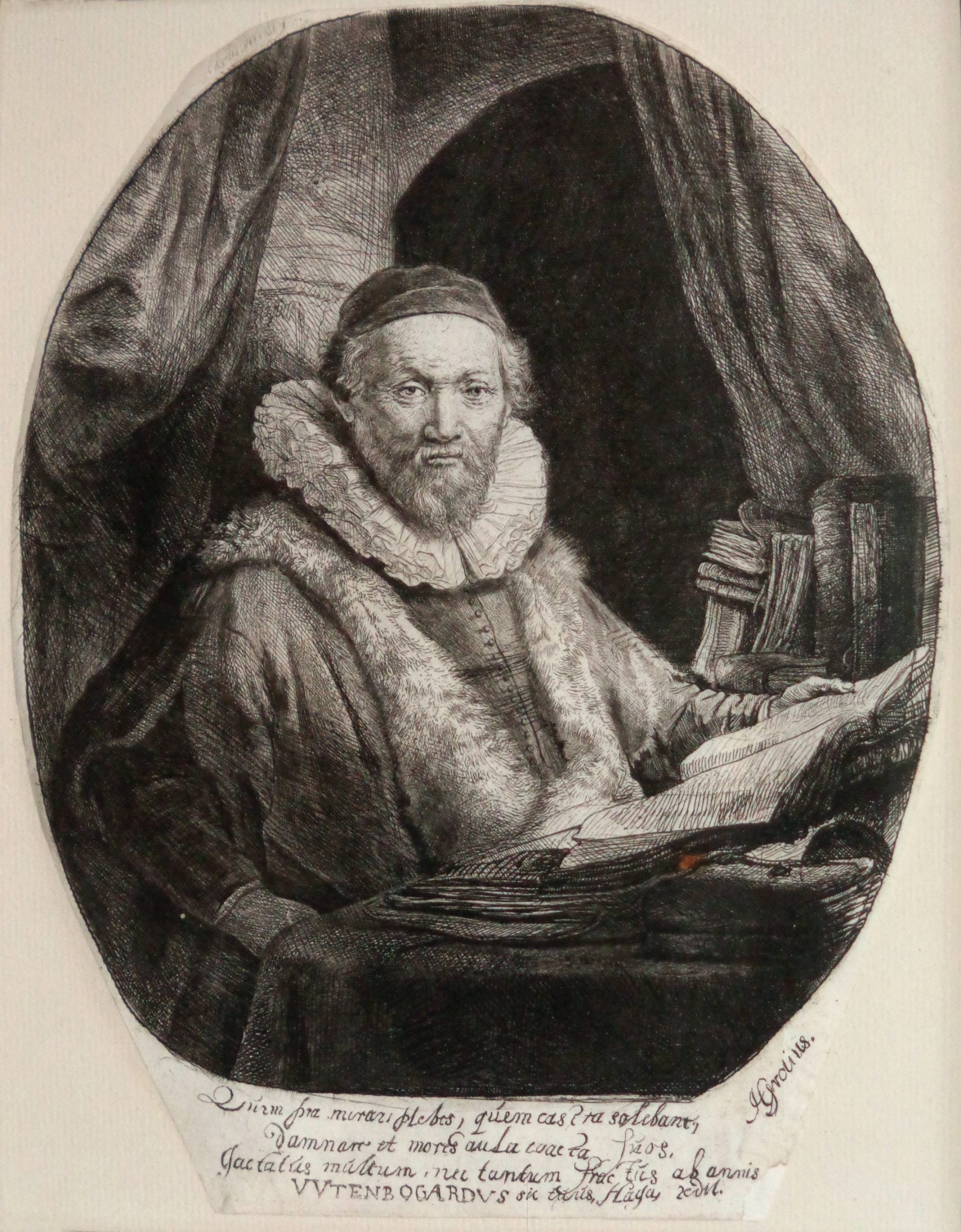 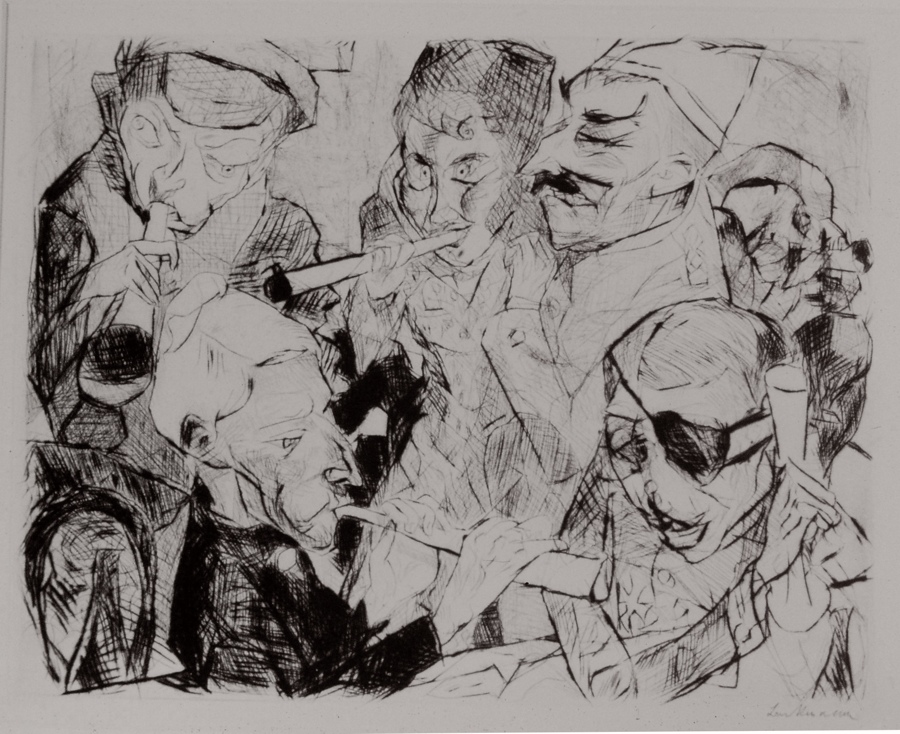 I wanted to be a fine artist since I was 4-years-old, so it was only natural for me to go with my parents to art gallery openings. On occasion, it was just my dad and me. The gallery R.S. Johnson on Michigan Avenue hosted classy openings with uniformed ladies serving champagne and fancy hor d’oeuvres. I remember meeting my dad after he was done at work and going to one of their openings. I got tipsy from a few sips of champagne and the artwork became a little blurry! We frequently went to art gallery openings at other galleries, including: 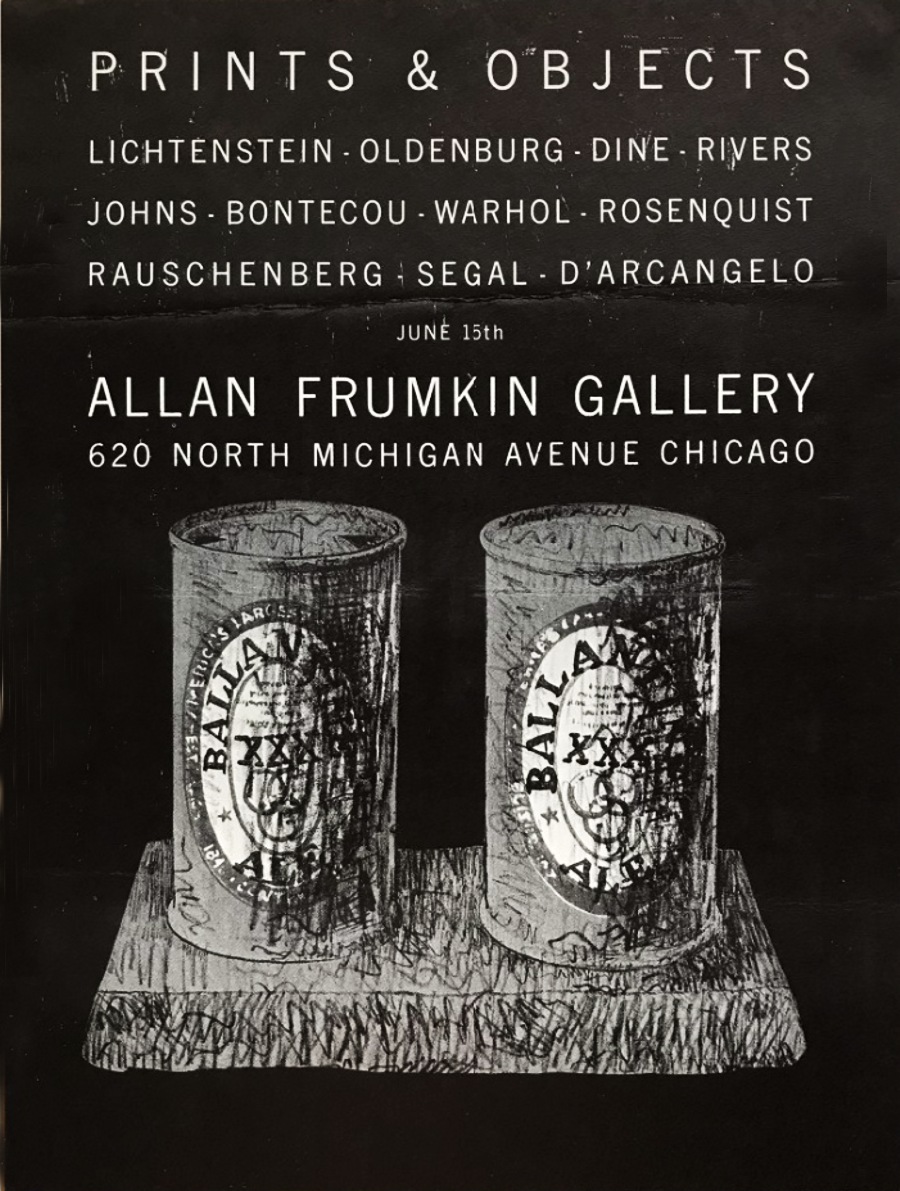 I also remember going with my parents to an open house at Joseph R. Shapiro’s house in Oak Park. Shapiro was a prominent art collector, philanthropist, and founding president of the MCA. At the time of his death in 1996, he was an active trustee at the Art Institute of Chicago. 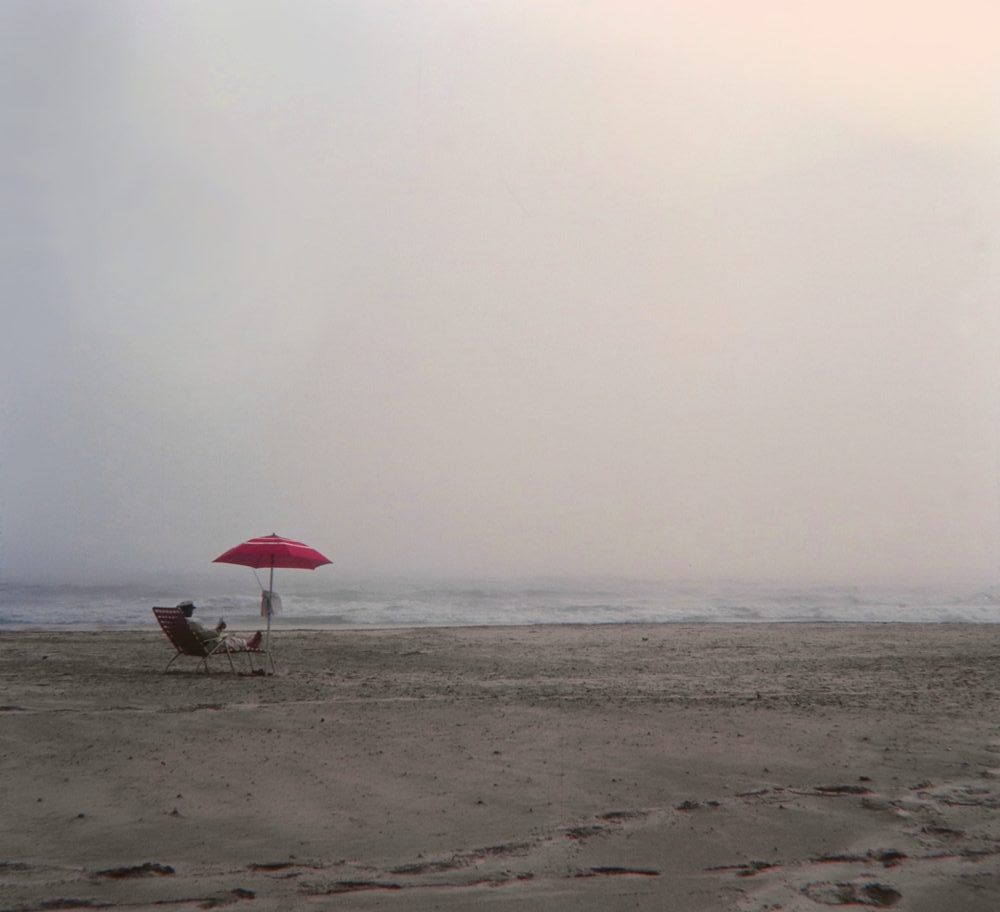 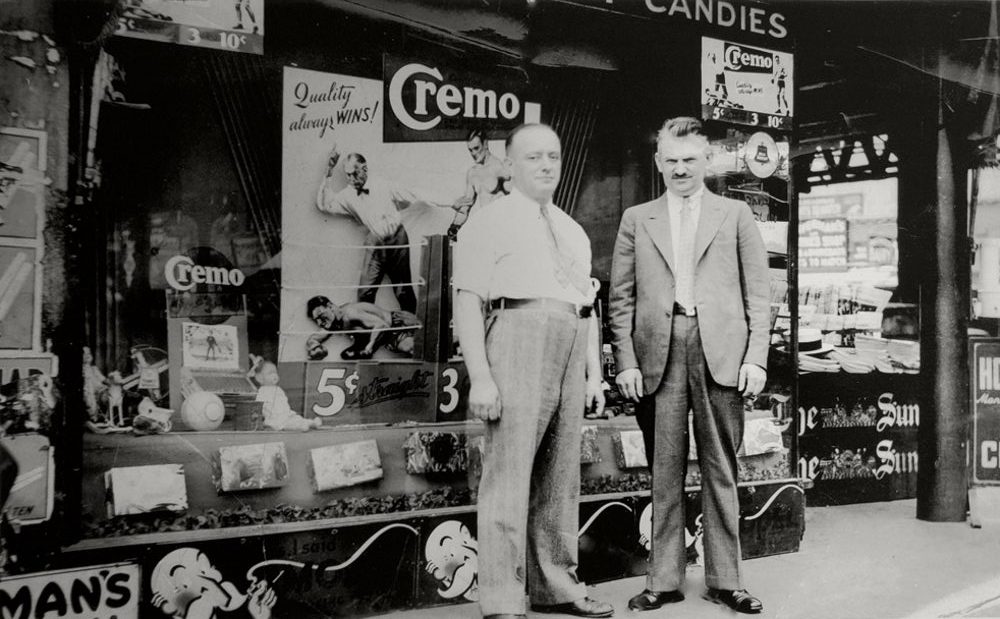 I’m incredibly thankful to my dad for teaching me how to shoot pictures and develop and enlarge prints in our makeshift basement darkroom at age 12, just as he did as a preteen back in his Brownsville Brooklyn house. Watching photos develop in a chemical bath was so magical that I spent countless hours down in the basement and my mom would have to repeatedly call me up for dinner.

My dad exhibited the photo of Long Beach shot on his Hasselblad in a local juried photography show. I found the original slide and was able to digitize it using a light box and macro lens, since very few scanners accommodate medium formats. Incredibly, he took the black and white photo when he was just 13. He told me that Mr. Feldman gave him a pair of roller skates from his toy store, he promptly fell on his rump, and decided right then and there that photography was more of his thing! Sadly, the original negative was lost with so many others in one of our many basement floods. When I was a child, my dad shot professional photos in our basement and even hauled out his medium and large format cameras to shoot our kiddie birthday parties and creative holiday cards. 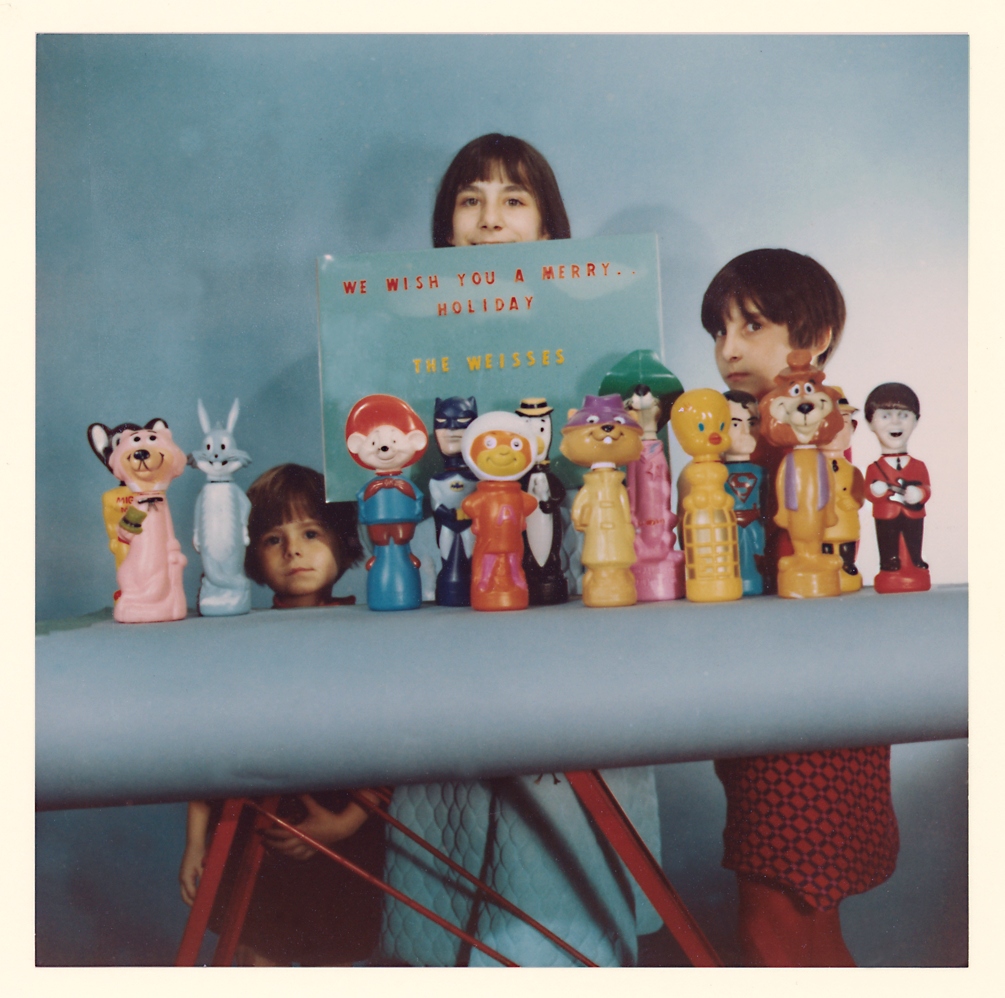 We went together to Skokie Camera to buy equipment and darkroom supplies for our mutual photography hobby, although our favorite camera store was Central Camera on Wabash. We were heartbroken when looters destroyed the historic, old-school shop on May 30, 2020 and both of us donated to the Go Fund Me page. We had film developed at LaSalle Photo, Standard Photo, Helix, and Gamma among other labs. The photos I shot on my 1976-1980 sojourns to NYC were similar to the photos my dad took as a young adult. Posting them on social media has been a nostalgic journey back to a coming of age period for me that is infused with greater poignancy now that he’s gone.

I remember my dad watching the CBS Children’s Film Festival in the 1960s with us. The 1958-59 film Skinny and Fatty was one of his favorites, along with the classic Red Balloon, and Hand in Hand, a sweet film about the friendship between a 9-year-old Catholic boy and a 7-year-old Jewish girl.

My dad’s love of the cinema rubbed off on me at a young age. When my younger sister was born in February 1963, my dad took my older sister and me to see the Brothers Grimm at the Michael Todd Theatre. My dad bought us roast beef sandwiches and root beer to eat and drink while we watched the movie. Afterwards, we stood outside in the bitter, snowy cold at Michael Reese Hospital and waved to my mom. Thankfully, the majority of the closed theatre’s elegant facade was saved and comprises most of the Dearborn Street face of the Goodman Theatre. Michael Reese Hospital didn’t fare as well –  it closed in August 2009 and demolition was completed in 2013.

We frequently went to movie theaters, with one unfortunate event that stands out. We were going to see Paper Moon at the Portage Theater on Milwaukee Avenue when an out of control VW bug swerved all over the place, came up on the sidewalk, and hit somebody who appeared to suffer minor injuries. There were several other witnesses and another person called the police, but this rattled us so badly, we could barely watch the movie.

Although it’s quite dated, I still enjoy one of my dad’s favorite’s – the musical On the Town, as an homage to him and also because his love of the Big Apple wore off on me! Later in my dad’s life, our taste was polar opposite at times. For example, my husband and I loved The Triplets of Belleville and Perfume: The Story of a Murderer and my parents hated both. I did get some great recommendations from my dad including The Cabinet of Dr. Caligari and Amarcord, and more recently the television shows The Kominsky Method and Unorthodox, which sparked lively phone discussions about loss and Hasidic Jews, respectively. In the last few years of his life, age-related macular degeneration robbed him of his vision. This didn’t stop him from trying to watch movies and shows and read books with one of a dozen or so magnifying readers he bought. We joked about his pursuit of the perfect magnifying glass, although this was hardly a laughing matter. 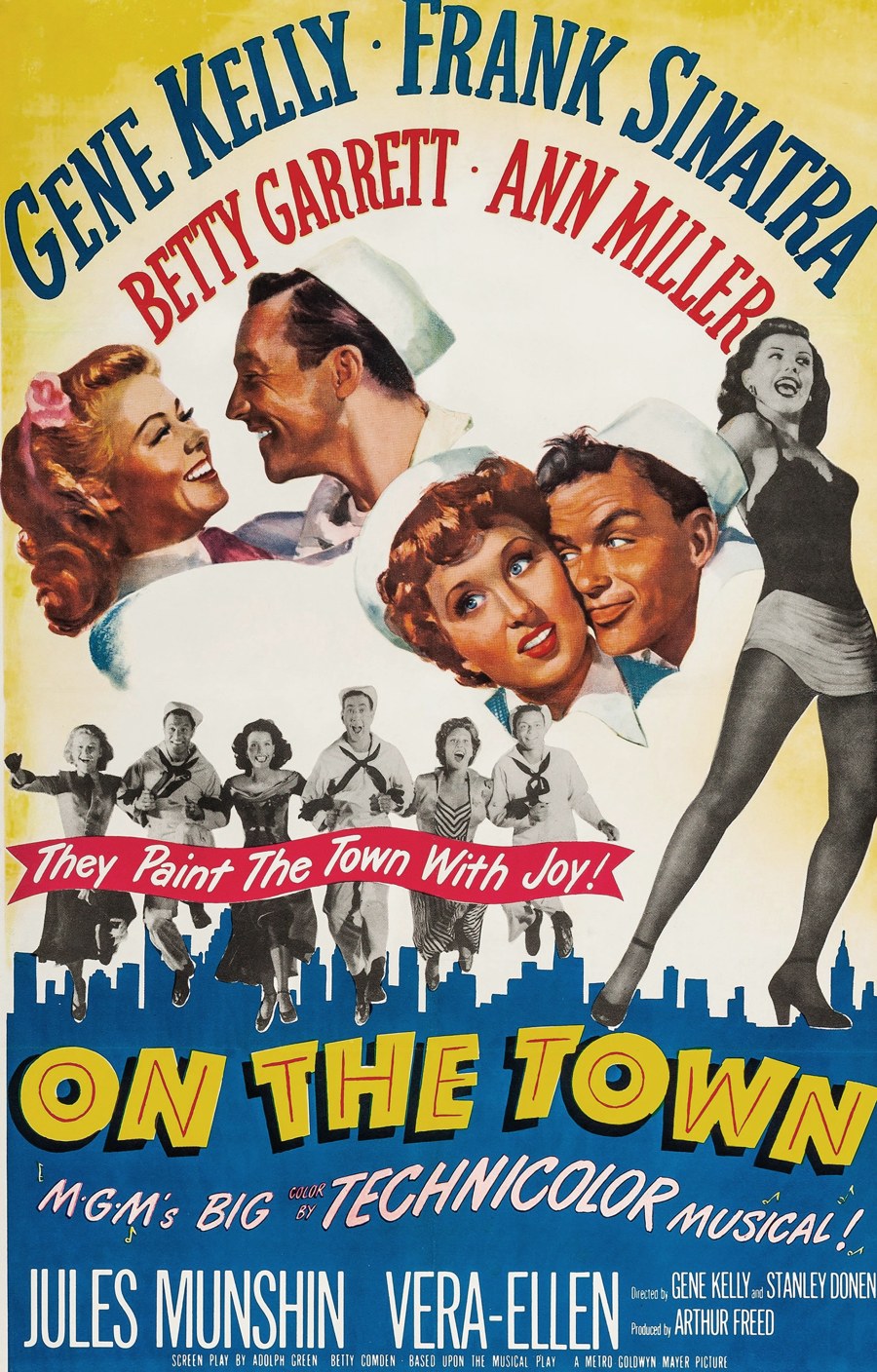 Steppenwolf: My parents went to many Broadway plays on their yearly trips to NYC, but also embraced theater in Chicago and introduced me to it through Steppenwolf. I was lucky to see Jeff Perry, Gary Sinise, Moira Harris, Glenn Close, John Malkovich, Laurie Metcalf, and others before they shot to fame. While my parents went to many productions, I saw Educating Rita with Laurie Metcalf, Austin Pendleton, and Jeff Perry and Of Mice and Men with Joan Allen, John Mahoney, John Malkovich, Jeff Perry, Gary Sinise, Rick Snyder, and Terry Kinney. 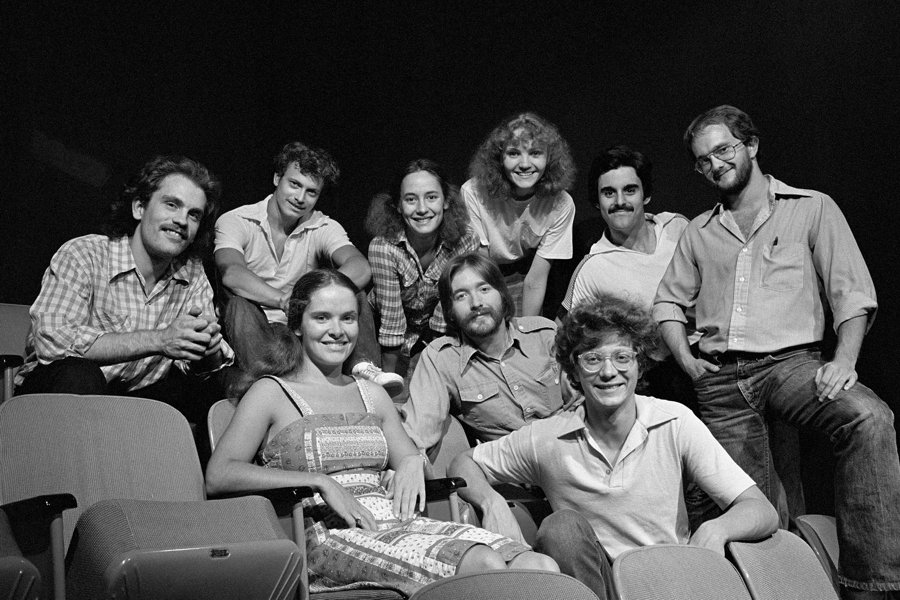 A Love of Music

When I was about 10 or 11, my friend Joan was over and we were in my bedroom. We heard loud music playing which drew us downstairs to the den. We starting acting goofy, bouncing rubber balls, twirling a baton, and such. But instead of my dad getting annoyed, he was delighted that we were inspired by the lively John Philip Sousa music he was playing!

Chicago Symphony Orchestra (CSO): Apparently, my dad became enamored of classical music as a little boy because the lady who lived upstairs from his family played the violin. He would say to the lady, “Do, do violin.” When he was in medical school in Chicago, he got a terrific first row seat to a CSO concert because he was in the U.S. Army. The date was April 12, 1945 and conductor Désiré Defauw came out in tears, announcing that FDR had died. Defauw was music director of the CSO from 1943 to 1947. My parents were CSO season ticket holders and went every Thursday night for years before having to cut back due to health issues. In recent years, I feel blessed to have gone to two concerts with my dad and one each with my sister and husband. I was sad that three pairs of tickets he purchased for the 2019-2020 season went to waste due to the pandemic. 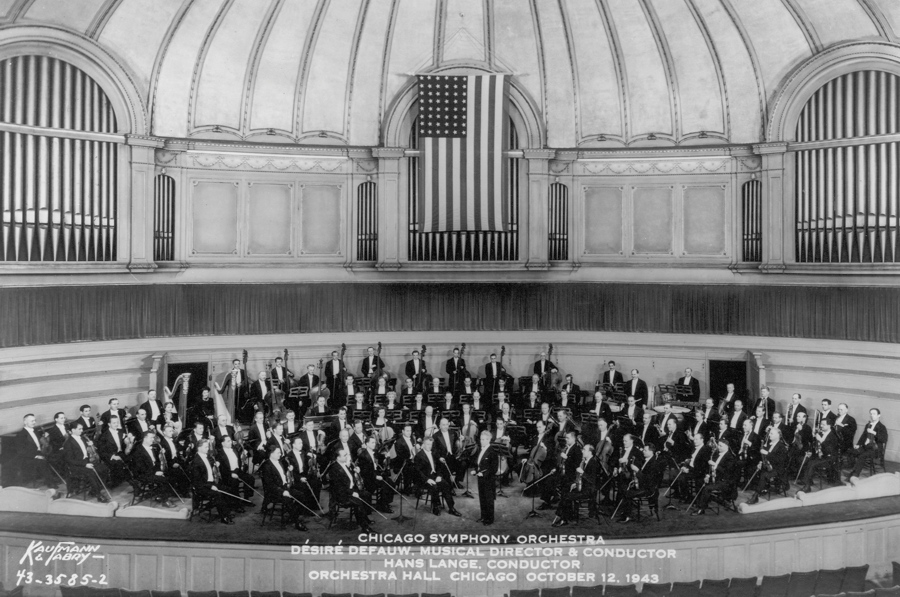 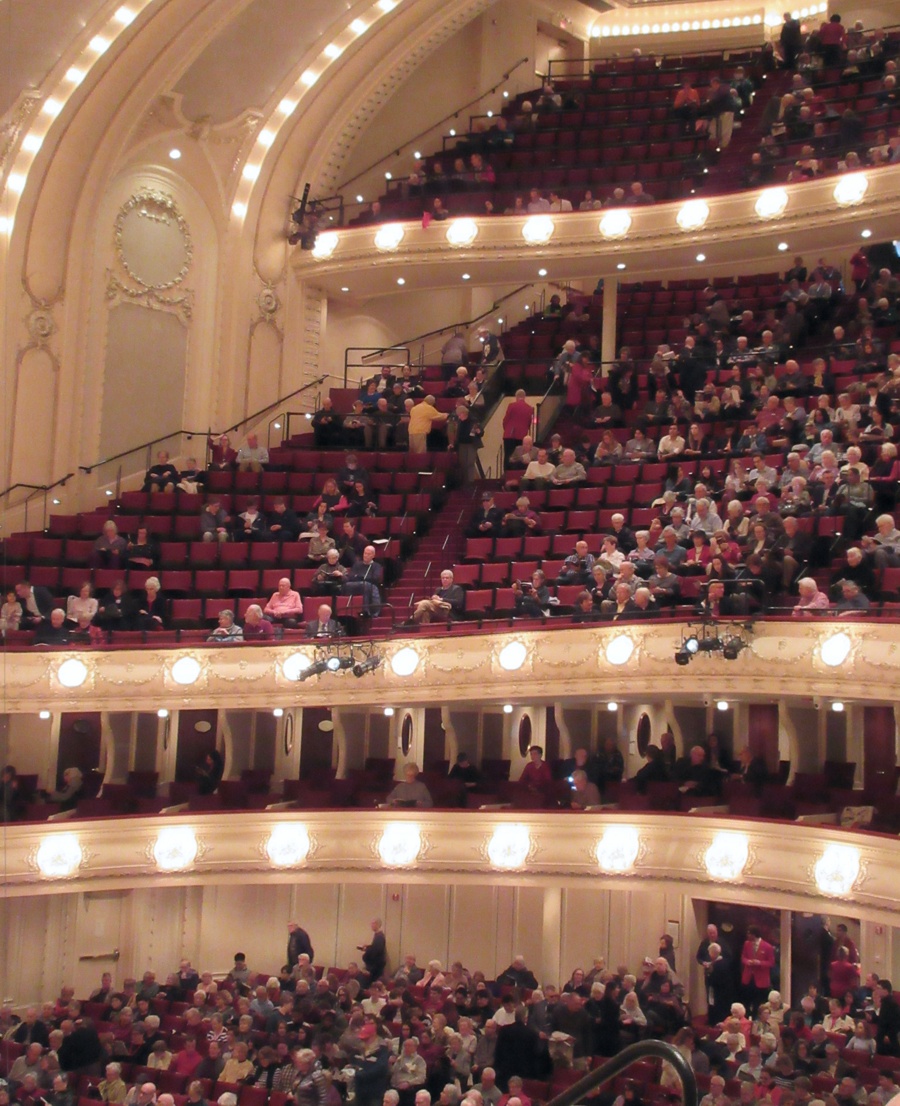 The Five Spot Café: After I read the book St. Marks is Dead, I was discussing it with my dad and he said my mom and him went to this iconic jazz club and saw Thelonius Monk on one of their annual NYC trips. On July 18, 1957, Monk’s quartet began a six-month residency at the club featuring John Coltrane on tenor saxophone.

Even though my dad primarily loved classical and jazz music, I remember playing the album Fig.14 by the Boston-area cult band Human Sexual Response, a group that gained semi-fame in New England when I was at RISD. For some reason I wasn’t using headphones and he walked into the den when the rather explicit song “What does sex mean to me” was playing and he thought it was cool music. Listening to their music again, I thought it was pretty bad and wasn’t surprised they broke up a mere four years after forming their band.

Naturally, my dad had a state-of-the-art stereo system that he bought at Devon Audio – later United Audio in Lincoln Village. He would get quite angry if we let the expensive needle skip on record albums. My dad gave me a homemade cassette tape with Mozart’s Eine Kleine Nachtmusik to take with me when I left for my first year at RISD. I loved this piece and although I took piano lessons as a kid and played (or butchered) all classical music, this was the turning point that sparked my love of classical music.

While the sadness of losing my dad will never go away, the many creative gifts he left me with provide some solace. His influence is felt every time I take a photograph, when I listen to WFMT and all his CDs, and whenever I post his photographs and mine that honor his legacy and our shared love of NYC.