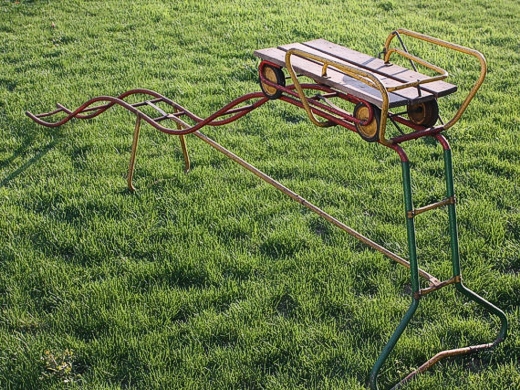 A few days ago, I posted an ad of a backyard roller coaster on a Facebook page dedicated to advertisements from the 1960’s-1970’s. This ad and another photo were shared by a reader on my Toys from the 1960s-1970s blog. I know nostalgia strikes a chord with many people, but that blog has elicited far more comments and views than anything else I have ever written. Published in December 2013, the blog still generates a good deal of interest. What is even more amazing is that the Facebook post has evoked a torrent of comments, some of which I will share further on in this blog. Reader Robert Jaye shared information about this backyard roller coaster in June 2014: We had a backyard roller coaster set from Montgomery Ward. It was little more than a tubular slide set. The tubes slipped over one another and one climbed to the top of the slide, and sat on a cart with wheels that were molded to ride the tubes. You pushed a release and down you went, all of five or six feet at a gentle slide angle. You rolled on for another five feet before encountering two small bumps that slowed you down before you rolled off into the grass.

The last month has been jam-packed with a lot of exciting play for sports fans. The Miami Heat clinched its second straight NBA title by beating the San Antonio Spurs on June 20 in Game 7, 95-88. The Chicago Blackhawks snagged its second Stanley Cup in three years in Game 6 of the NHL finals in Boston on June 24 in a rousing finish with back-to-back goals. There were injuries, naturally – such as a collision in Game 6 of the NBA Finals that caused Dwyane Wade’s left knee to swell very badly when he was already suffering with an injured right knee. Chicago Blackhawks Captain Jonathan Toews got hit in the head and sat out part of Game 5, while Andrew Shaw took a puck to the face in the first period of Game 6, but returned in the second period after receiving stitches. For those that enjoy their spectator sports with a bit more starch and less blood, how about Wimbledon, which officially started on June 24 with fifth-ranked Rafael Nadal getting knocked out for the very first time in the first round of a Grand Slam! On June 20, Abby Wambach broke Mia Hamm’s record for international career goals by a soccer player, scoring four times in the first half against South Korea to increase her total to 160. While I was watching her the next day on Good Morning America with a recap of one of the goals she scored by heading the ball, I thought about the number of sports- and recreation-related injuries and concussions suffered every year by professional and amateur athletes alike.

It can be very disheartening when your parents age and are subjected to declining health. One of the most common health concerns among seniors is falling, and alas, this has happened far too many times to my dear mom.  Having launched many PR/media campaigns on head injury prevention in my last position over the course of seven years, I know quite a bit about traumatic brain injury, causes, and statistics – and I am passionate about injury prevention. While my mom has fallen quite a few times and sustained broken bones as a result, this is the first time that a tumble has led to a serious head injury. I was quite upset when she called me from NYC (after having recovered sufficiently) and told me they walked back to the hotel after she fell outside the Chrysler Building. She was bleeding profusely from the wound sustained in her head, exacerbated by being on blood thinners. They should have called 911 immediately instead of walking back to the hotel and then calling an ambulance. My mom spent 17 hours on a gurney in the infamous Bellevue Hospital ER as a result of this fall, but the good news is that she did not suffer a concussion. And thankfully there was not a traumatic brain injury such as a subdural/epidural hematoma  or skull fracture, which can be deadly.