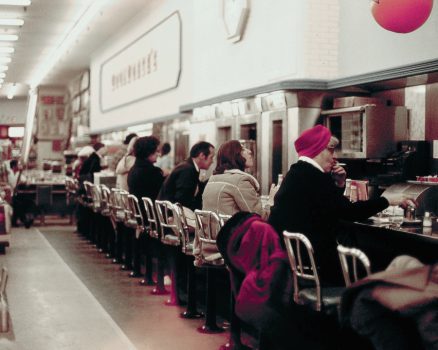 In April of this year, I posted this 45-year-old photo I took of the Woolworth at 674-676 N. Michigan Avenue on Forgotten Chicago’s Facebook page. It generated more than 2.8 thousand likes, 384 comments, and 157 shares. When I shot this photo, I was a high school junior and my mom and I sat down at the counter for lunch afterwards. I always loved this location more than the giant flagship store on State Street. It was a block away from my dad’s Michigan Avenue office and I found the atmosphere more intimate than the vast downtown store.  I believe this photo struck a chord for so many people due to the nostalgia factor – looking back on a more “innocent time” helps people momentarily forget about reality – and this horrific pandemic. Many people were appalled by the smoking woman and wrote pithy comments. The overwhelming response was also indicative of how many people loved Woolworth back in the day. I reread the comments and incorporated some of them in this blog, including the bold robbery that occurred in October 1952. Since scant photos of this location are available, I’ve included other wonderful photos and ads culled from my research.   My Candy-Coated Woolworth Memories I went to the Gold Coast by myself as a child on the Pace bus, but my mom rarely gave me any money beyond what I needed for bus fare. I managed to find spare change on the ground or sometimes brought meager savings earned from returning Diet Rite bottles to the corner store. Buying little trinkets at Woolworth provided solace during some difficult years of my childhood, which thank goodness were mostly behind me by the time I took the 1975 photo. I loved the counters and displays filled with delightful trinkets, and… 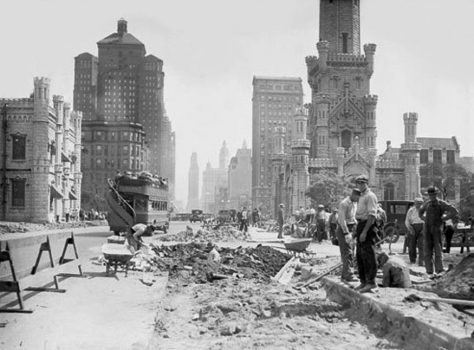 This blog is about my family’s personal connection to North Michigan Avenue (from the Chicago River north), also known as the Magnificent Mile, as well as an homage to a few iconic buildings and businesses that no longer exist. The stretch of North Michigan called the Mag Mile, for short, figured into my family’s life from the day I was born. While my dad first started his private psychiatric practice in a bathroom-sized space at 25 E. Washington (Field’s annex facing an alley) in October 1952 for $93 a month, that was his only office location not on the Mag Mile.     The Sterling Building (also called Michigan-Superior) Shortly after returning from serving in the U. S. Navy in Bainbridge, Maryland in 1958, my dad’s first office on the Mag Mile was at 737 N. Michigan (Sterling Building). Once I was old enough, I would shop at the Walgreens next door before going up to his office. In 1970, my dad was forced to vacate when Neiman Marcus decided to build on that site. Ironically, the deal fell through and a parking lot occupied this site for more than a decade. It took 14 years before Neiman Marcus opened its flagship Chicago store here in 1984. Designed by architect Andrew Rebori and completed in 1929, the Sterling Building was commissioned by the family that owned the Fine Arts Building. The gorgeous 5-story Art Deco building had an intriguing observatory on top. The building was originally designed to include artists’ studios, but even in the 1920s, artists couldn’t afford those rents.      The Farwell Building – 664 N. Michigan My dad’s next office was the 11-story historic Art Deco/Classical Revival Farwell Building designed and constructed in 1927 by architect Philip B. Maher. Arthur Farwell owned several other North Michigan…

The F. W. Woolworth Company, also called Woolworth’s or Woolworth, delighted children and their parents alike for more than a century. In Illinois, 25 Woolworth stores, mostly in Chicago and the suburbs, were shuttered forever in July 1997. In the UK, the stores lasted a decade longer, going out of business in December 2008. The very last thing I bought at Woolworth’s when the store was liquidating stock, was a pair of Barbie roller skates for my then 9-year-old daughter. The store closures symbolized the end of quite a run that began on February 22, 1878 when Frank Winfield Woolworth opened “Woolworth’s Great Five Cent Store” in Utica, New York. The first store failed after a short time, however, the second store that opened on July 18, 1879 in Lancaster, Pennsylvania was a big success. When he launched the Lancaster store, Frank enlisted his brother Charles Sumner Woolworth to join the business.