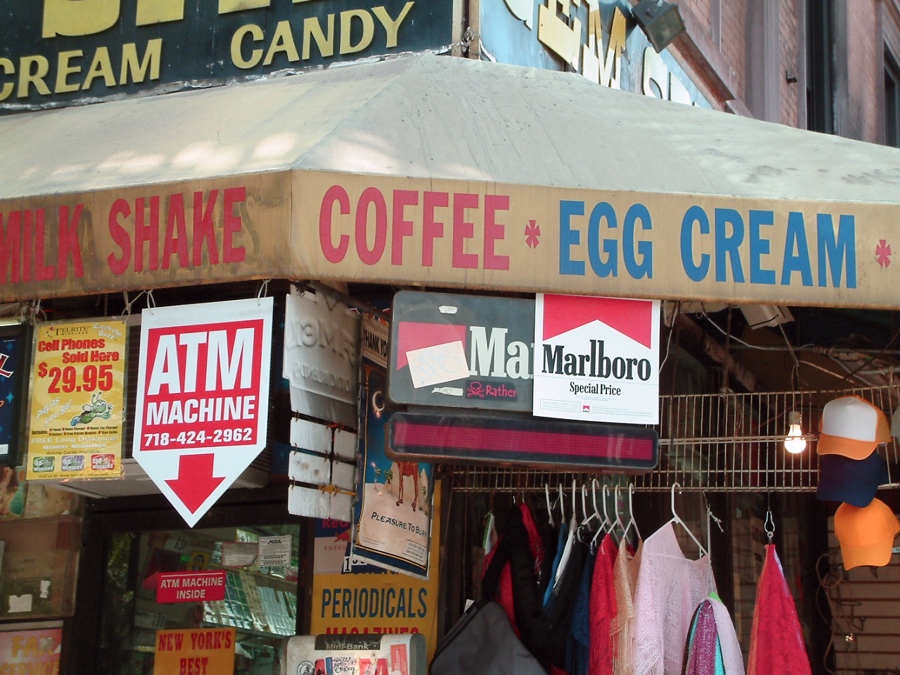 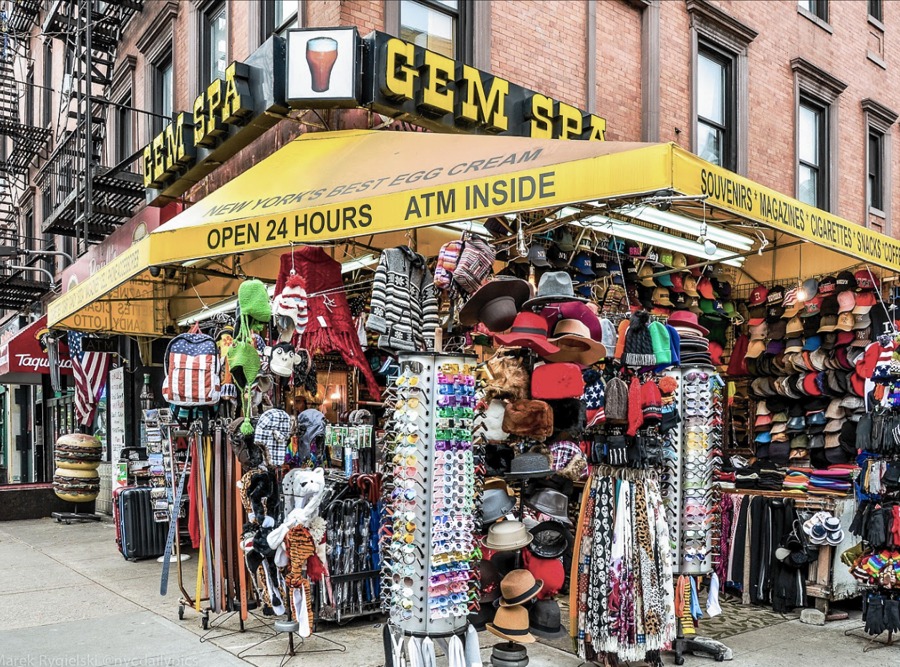 Like so many others businesses that have closed in the last decades, Gem Spa in NYC’s East Village couldn’t sustain its business and closed in early May 2020. Although they had financial problems over the years, and most recently in 2019 after losing their lottery and tobacco license, the current owners said the COVID-19 pandemic was the last straw.

If you read my blog, you may know that NYC is like a second home to me. The closing of Gem Spa feels like one other place of my youth has slipped away. Although I’m also upset that Jeri’s Grill closed in Chicago, NYC will always be associated with a magical time in my early adulthood when I was spreading my wings creatively, intellectually, and emotionally. This was before sky-high rents forced so many businesses to close and prior to gentrification stripped the Big Apple of much of its gritty character. Unfortunately, Gem Spa isn’t the only thing that has changed on this once incredibly hip intersection of the East Village. When I visited in 2018, I thought St. Mark’s pretty much resembled many other somewhat gentrified NYC streets, albeit with a few vestiges of its storied past. 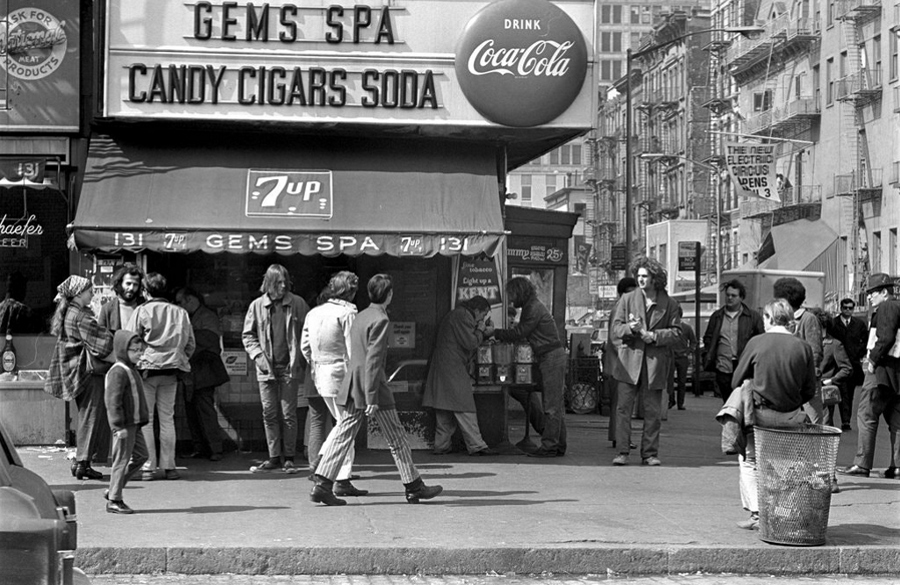 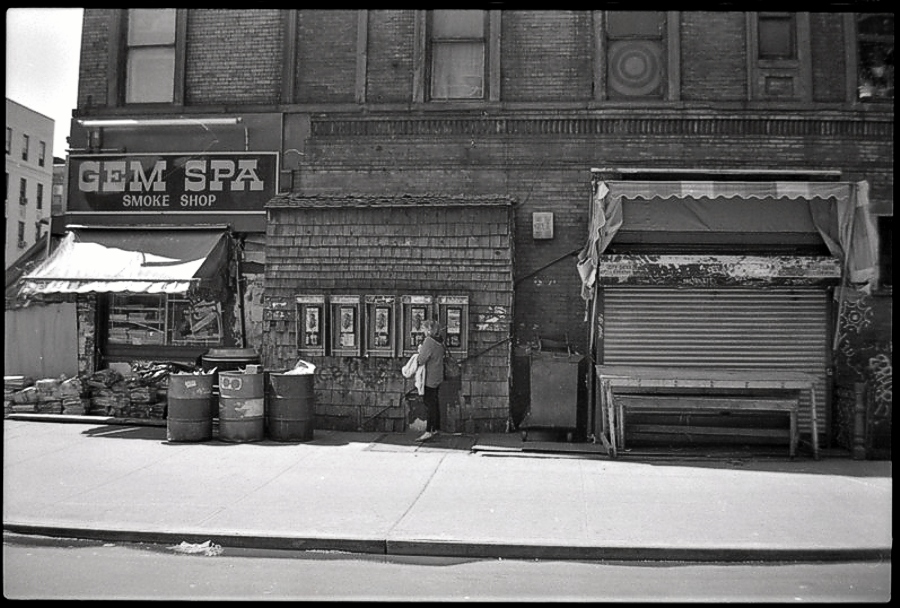 Located on the corner of St. Marks Place and Second Avenue, the beloved and iconic newsstand dates back to the 1920’s. It operated under a different name until 1957 when the name changed to the Gems Spa – at some point the S was dropped in Gem. It was a favorite hangout of Beat poets, hippies, punk rockers, local residents, and tourists. They sold local newspapers and magazines, including a wide array of international and underground papers and magazines, except for pornography. The little corner business was also famous for its egg creams (a NY drink made from milk, chocolate or vanilla syrup – preferably U-Bet, and seltzer). And of course, the fortune-teller Zoltar was stationed outside, along with all sorts of colorful clothing and other merchandise.

The Gem Spa in Culture 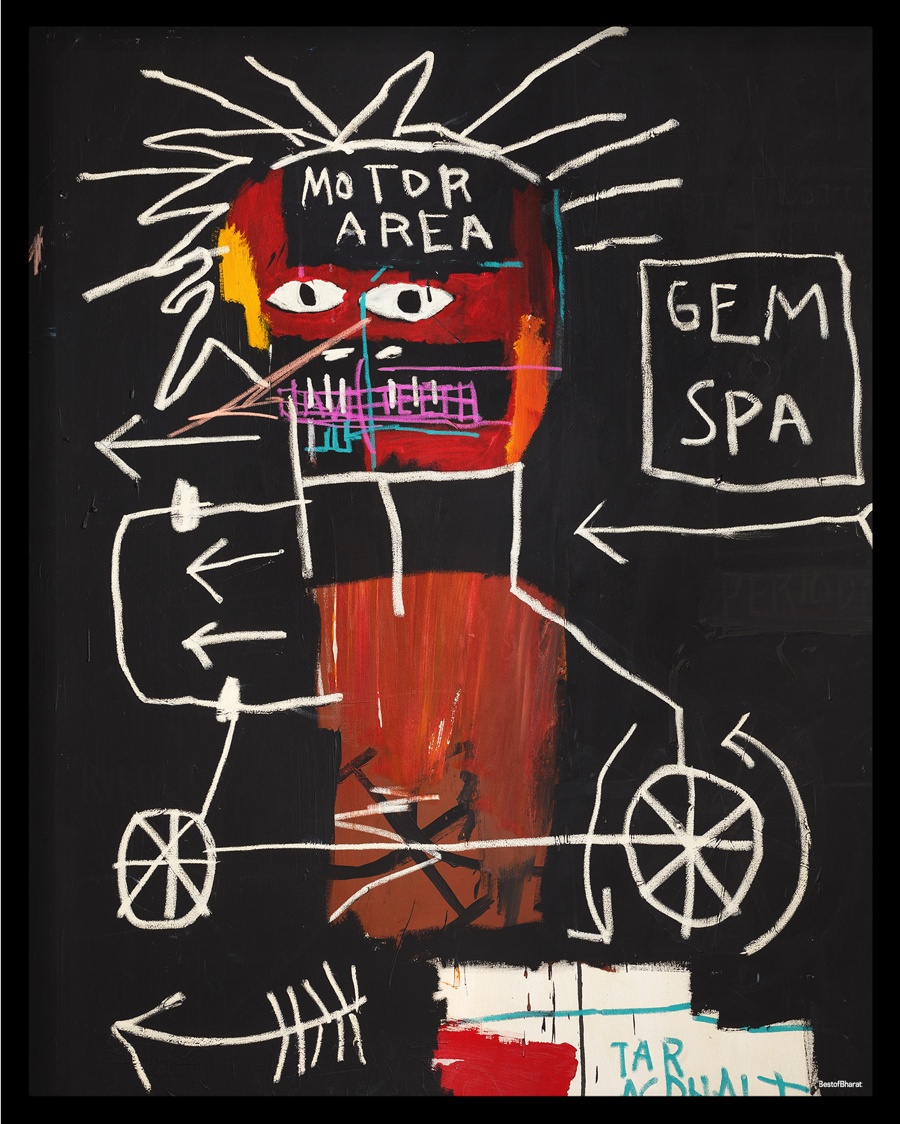 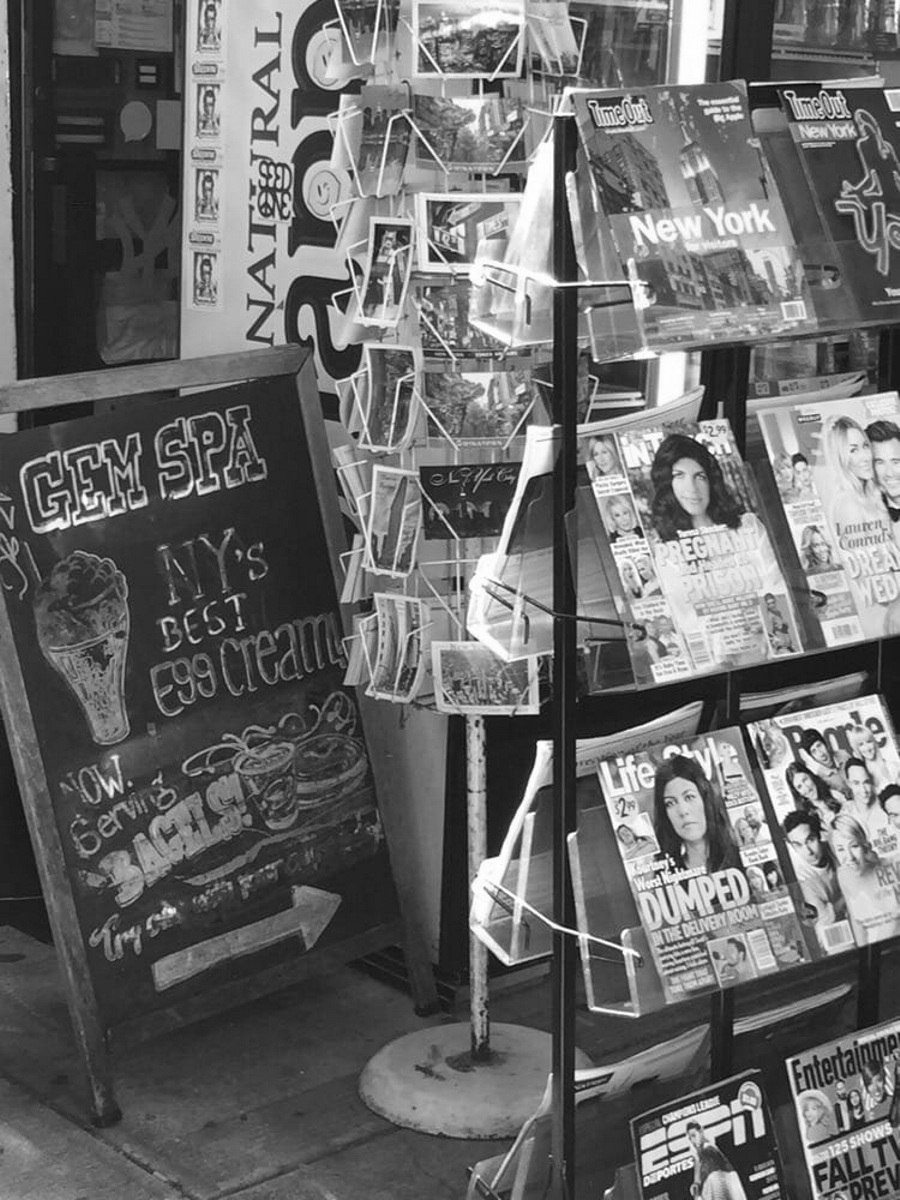 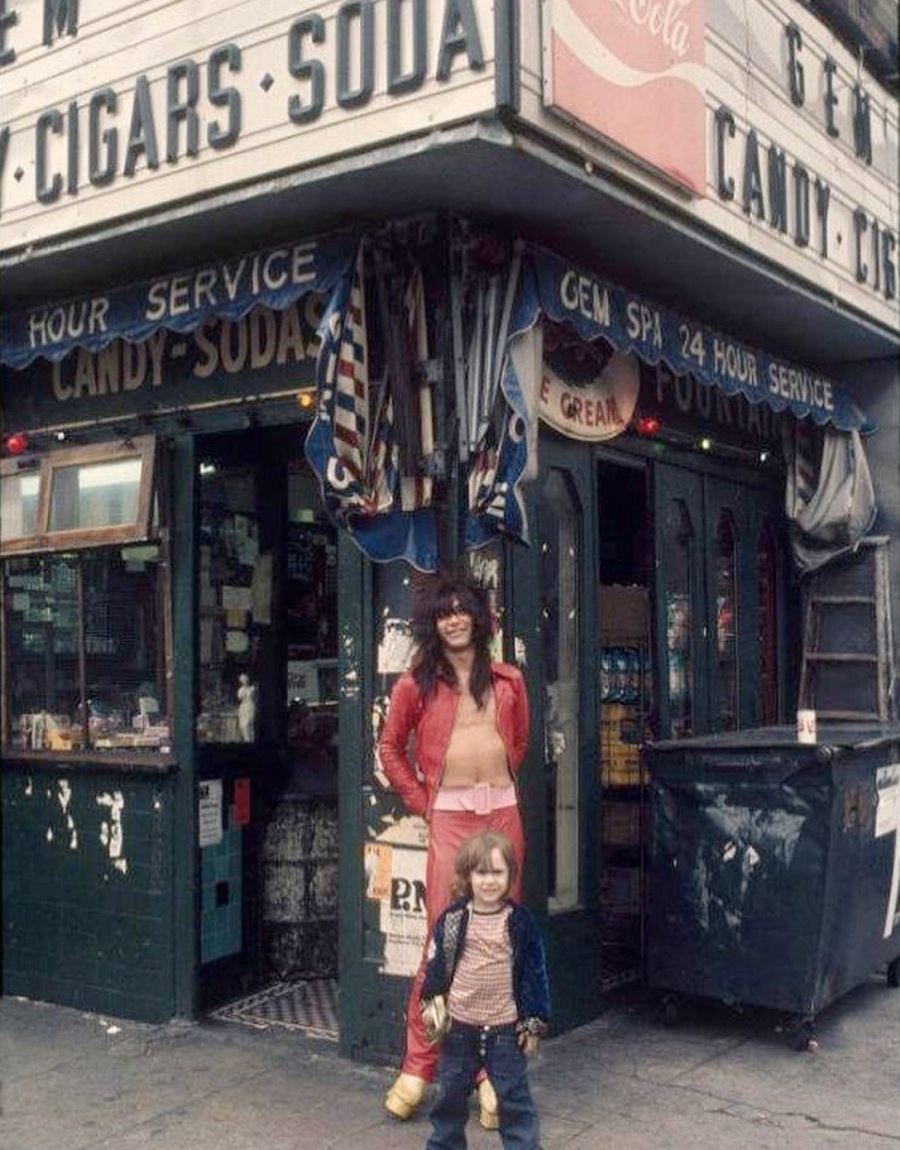 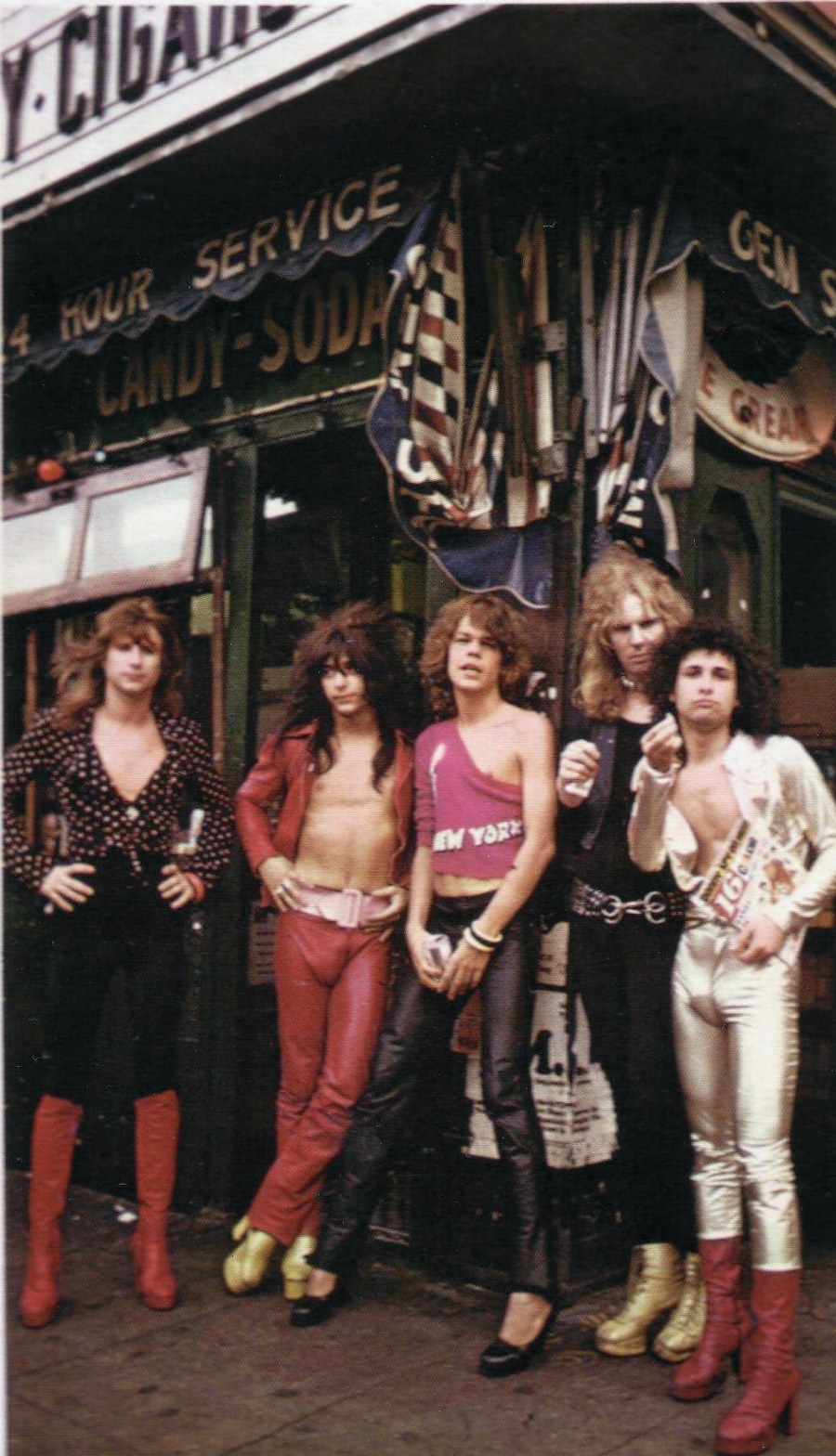 We recently watched the wonderful 1974 film Alice in the Cities by German filmmaker Wim Wenders. The protagonist of the story, a disillusioned photojournalist named Philip Winter, is traveling across America on assignment. He is disgusted by what he sees and can’t find the inspiration to complete this piece, so his NYC editor gives up on him. I was delighted and surprised to see the scene in which Philip visits the Gem Spa. I have not seen this mentioned in any of the articles on Gem Spa, likely because it’s too obscure a movie. And astute viewers will also catch a brief glimpse of the then nearly new Twin Towers.

The gist of this illuminating and touching story is that Philip is saddled with the care of a young girl named Alice after a brief encounter with her mother Lisa, who is in the process of breaking up with her NYC boyfriend. Lisa seemingly abandons the two of them when she doesn’t show up at the airport for the flight they all booked. Back in Europe, Philip struggles to care for Alice while facing his own creative demons, which inevitably ends up being just the push he needs to remedy his malaise. The performance by the young actress Yella Rottländer is amazing. 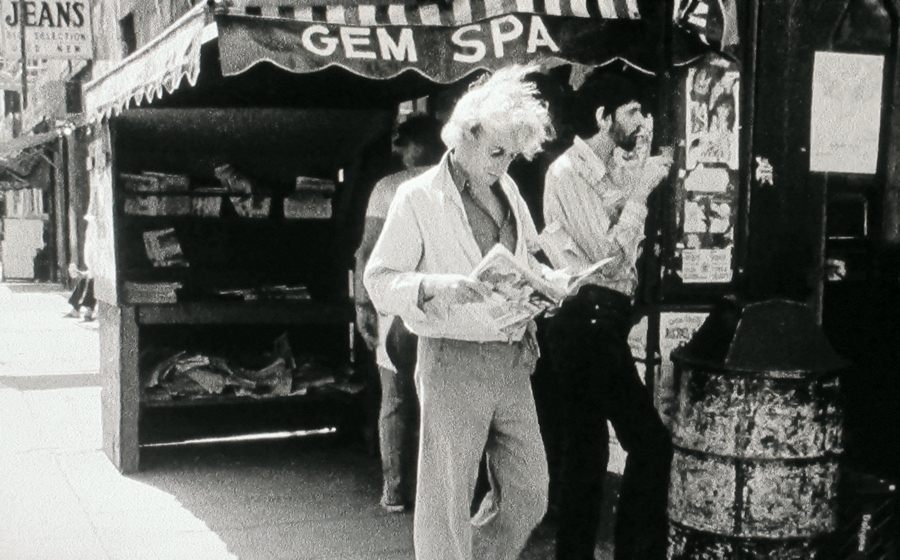 Philip in Alice in The Cities Screen Capture

Madonna shot a scene for the 1984 film Desperately Seeking Susan at Gem Spa. Last year, the photographer David Godlis sold autographed prints of his famous photo to help raise money for the cash-strapped store. I just watched the film and was searching closely for the Gem Spa sign, but all you see is Madonna reading a newspaper outside. The block on Second Avenue between St. Marks Place and East Seventh Street is featured in the film repeatedly and the shop Love Saves the Day (still operating in New Hope, Pa.) has a starring role. 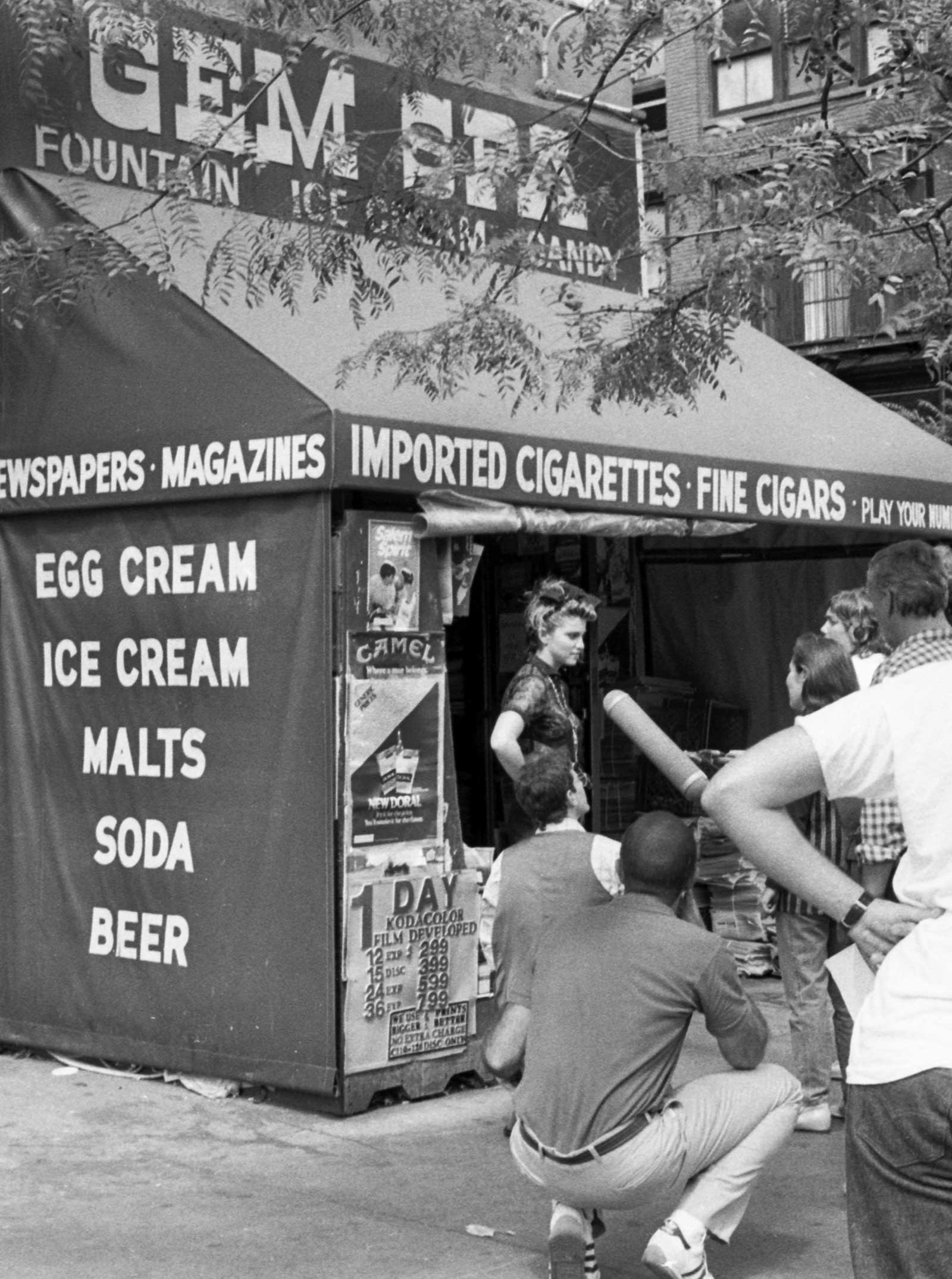 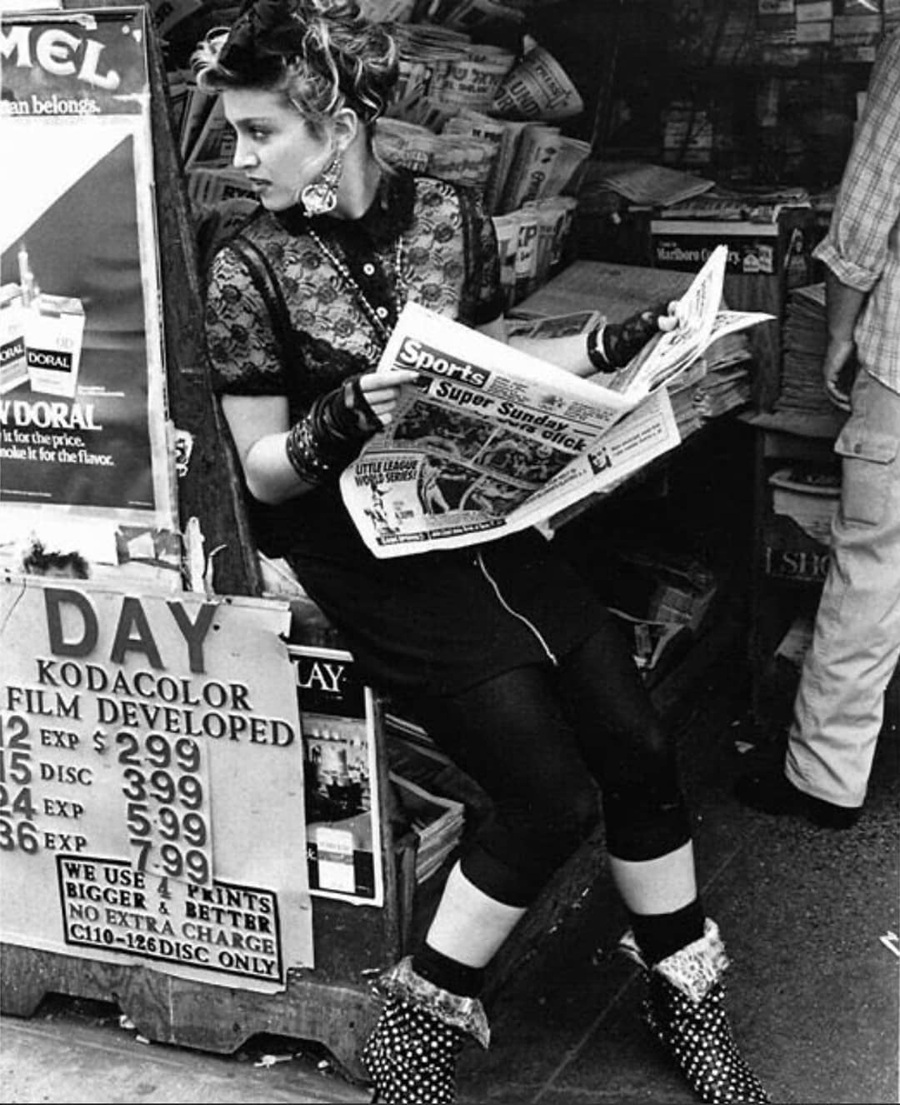 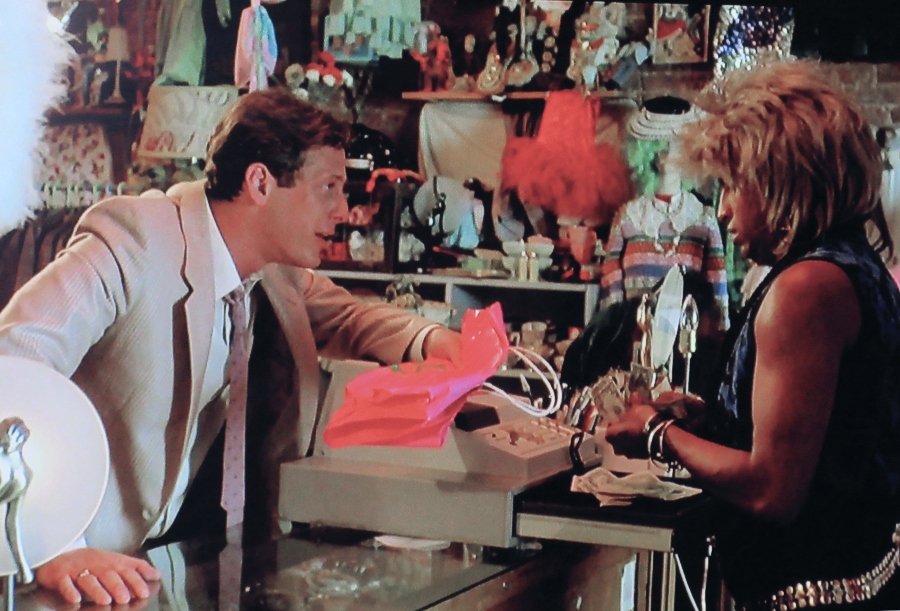 The Gem Spa in News Articles

On March 2, 1972, The Village Voice announced that the Gem Spa had closed. Here is an excerpt:

The candy store which became a clearing house for the hip-yip-street freak festival in the East Village is now padlocked, its windows covered with newsprint and cardboard. Gem Spa was a landmark reborn. It was halfway between the Fillmore and the Electric Circus, always open and ready to whip up a reasonable egg cream, sell cigarettes, or provide any magazine or underground paper you had in mind. Outside on the corner other things were constantly changing hands and if you were doing the East Village sooner or later you ended up at Gem Spa. 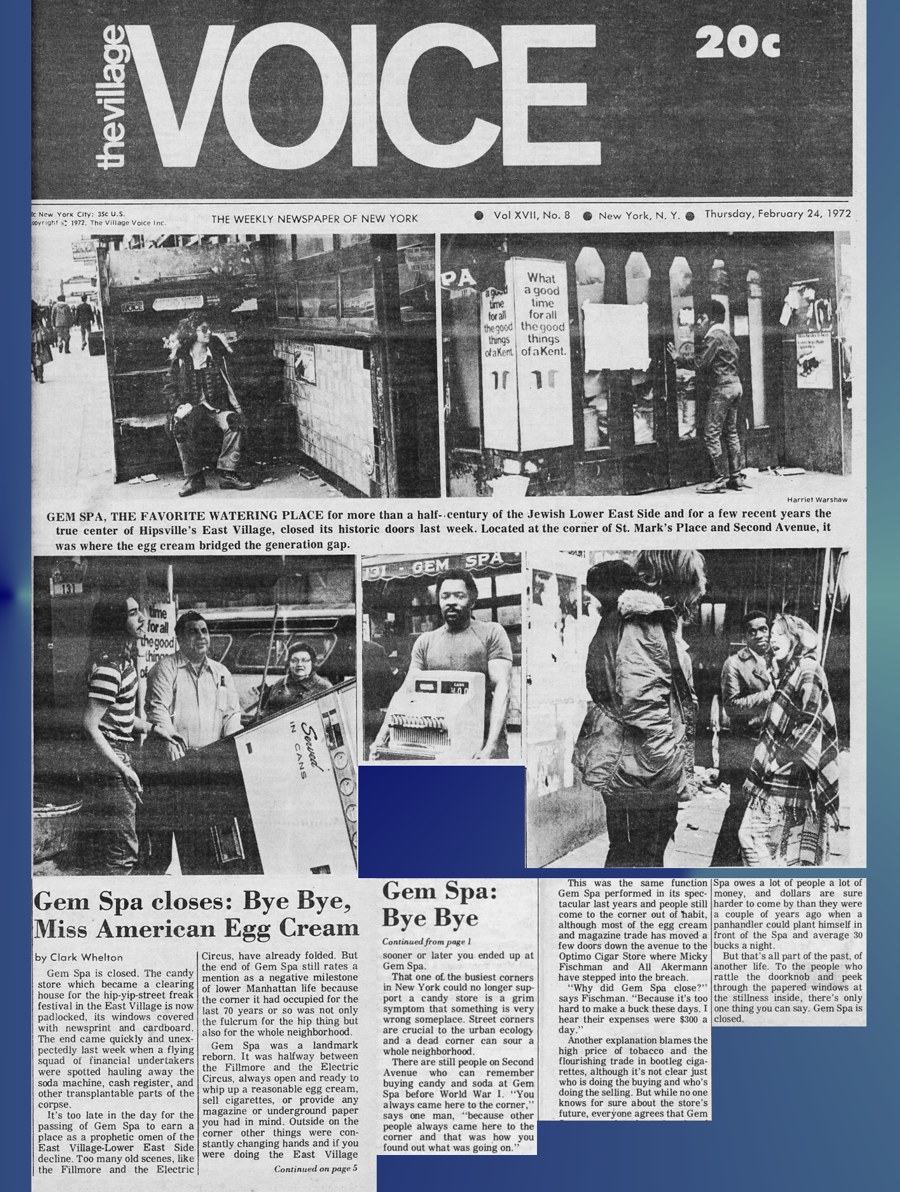 Excerpts from The New York Times

The East Village a stop for sightseers. For lead‐writers, moralists and columnists, the contraction of an entire world. What sort of world?

Richard’s world. He’s upstairs tonight trying to sleep in the hallway. He’s the wiry, tough, flame bearded young blind man, often seen outside the Gem Spa or other heavy corners of the East Village. You know, he plays a clarinet, and panhandles.

Arts in America: A New Generation Chases the Spirit of the Beats, December 11, 1987

City Lights Books, the independent San Francisco publisher that is a landmark in the history of the Beats, has issued a guide to the Manhattan muses of the writers (egg creams at the Gem Spa, challah French toast at the B & H Dairy) called ”The Beat Generation in New York: A Walking Tour of Jack Kerouac’s City.”

For those who know where to look, New York City is a map of rock-and-roll history. Danny Fields, who has been part of New York rock as a publicity agent (for the Doors and Cream), manager (for the Ramones and Iggy Pop), and writer, will lead six tours this weekend to some of the city’s rock landmarks.

Turning onto Second Avenue, he passed the Gem Spa newsstand, where the New York Dolls posed for the back cover of their 1973 debut album. “It’s just about the only thing on this block that’s still what it was,” he said.

While I know that writing about the past can’t stop the inevitable passage of time that feels like it’s hurdling me to old age, it’s important to remember the way things were.